There are those occasional days when you get back to the car and all you can utter is “thank God that’s over.” This trip was one of those.

In concept it seemed to be a good idea. In execution it ended up being one that should be put down to experience and a sense of relief that I don’t need to go there again.

Fortified by late-afternoon sausage and chips at the Travellers’ Rest above Grasmere, the car was left on Dunmail Raise and the jaws of the Wythburn valley were entered. My aim was to get an early start the next morning from Greenup Edge and then to head north along the so-called ridge from Ullscarf along to Bleaberry Fell. The weather forecast was promising, so a high wild camp held the attractions of sunset, sunrise and a relatively straightforward day with height already gained. The finish would be a comfortable, if lengthy, stroll back along the western shore of Thirlmere. It all began well. Once over the stile at Dunmail Raise a clear and easy path headed north and skirted round the lower slopes of the fell. Just before reaching the farm a left turn took me along the edge of a small plantation, into the Wythburn valley and to the footbridge at the point where the burn finishes its cascades from above. That’s where things started to go wrong.

Although a light spatter of rain contradicted the forecast, I was still confident of promising conditions ahead, and Wainwright described the path up the northern side of the burn as being drier than the side on which I stood. So I crossed the bridge. Once above the waterfalls, that were picturesque but unphotographable because of the rain, “drier” as a relative term came into its own. I contoured round above the appropriately named Bog on a combination of barely linked sheep tracks and stretches of what might have been a path: progress was slow, laborious and wet. Looking across to the other side of the valley and a clearly defined path meant it was also frustrating. But by the time I’d met this path as it crossed the upper reaches of Flour Gill, at least the rain had stopped; for the time being.

Two hours from the car, at just before 8.00pm, I arrived at Greenup Edge more tired and considerably wetter than I’d planned to face the next challenge: somewhere to put the tent.

I could do flat or dry but not both. If I also wanted to get out of the wind that had now picked up it would have required the help of Kirsty and Phil. Flat meant standing water, slightly sloping meant squelchy, and anything steeper stood a chance of being moist at best. As the terrible twosome, say, location, location, location is about compromise and I was about to have to make one. Clutching at straws, I looked at the bodies of midges that had been left on the mesh of the tent inner from an earlier trip and reminded myself that things could be worse. The night was spent slithering down the slope in the tent and crawling back up again before being halted on another downward slide by my rucksack. The fun came to an end with the sound of rain at about 5.00am. There seemed little point in sticking my head out for the obligatory sunrise shot.

Breakfast and a few showers later and the tent was packed by 7.30am, well after my planned start time. Wearing waterproofs meant the pack was lighter and the content of a spare water bottle was jettisoned; the sight of shower upon shower approaching from the south west suggested that dehydration wasn’t going to be a problem. And so the trudge began. Everything AW has to say about Ullscarf, Armboth, High Tove and High Seat is true: in buckets.

For the entire 10km length of this wide grassy ridge you think a line of fence posts can be followed. Not that this makes navigation straightforward or the route a series of straight lines between A and B. Somewhere in AW’s notes he observes that the slopes around here are insufficiently steep to encourage any water to drain off. As a result, you end up zig-zagging round ponds, bogs and swamps, and this is where the noble sport of tussock jumping arises. If Grasmere ever won the right to host the 2020 Olympics this would be the event that should sit at the opposite end of the spectrum from beach volleyball. You stand there, faced by a stretch of green that ripples and undulates in front of you. The tussocks are scattered as if by some random act like stepping stones that lure you into a precarious dance. Just before you land on each your foot sweeps the grass aside to create a psychological platform that will support your weight as you change direction and launch yourself forward again; well it will if you “think light.” You hope a walking pole can be used like the Dutch vault across canals and dykes, but you’ve either scrambled to the other side or ended up knee-deep in water before the spike even finds anything solid in the blackness below.

And it seemed to go on like this for ever. The only break being the sudden view from Standing Crag and the descent towards Blea Tarn. As the weather came in and out the wider views of the higher fells on either side changed every minute and gave some satisfaction. But the conditions were just unrelenting. And of course, once you’re wet you can’t get any wetter. The dome of Ullscarf was passed, and the little knots and crags to the west of Armboth Fell gave slight relief from the dodging, jumping and wading. It was tempting to say “sod it” to Armboth Fell itself, but I’d got this far and I was damned if I was going to have that nagging guilt of just passing it by. Perversely, the rocky outcrop and tiny precarious cairn that mark its top had a solitary charm that made the wade worthwhile. High Tove posed the question “why?”, and on High Seat I asked the question “which?” as a cairn and trig point a hundred metres apart both looked exactly the same height. 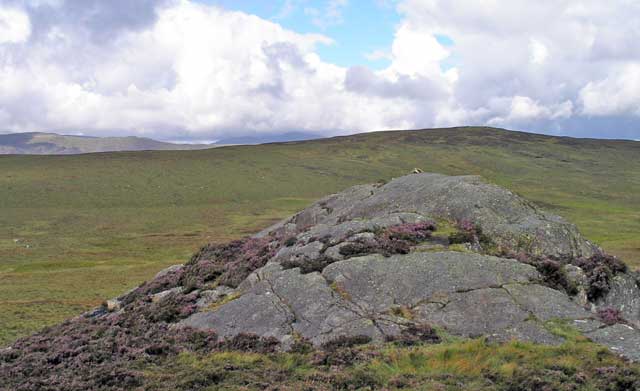 Finally, the wet approach to Bleaberry Fell gave plenty more sport in selecting which side of the fence to choose and which might prove to be wetter than the other. By now I knew that whichever one I followed would be wrong so I might as well just get it over with. Having spent the previous three hours concentrating on bog and swamp immediately in front of me, it was great to look up and relish the view of the northern fells stretched across the horizon ahead. As if offering some sort of reward or apology the weather began to clear.

A line of fence posts curved its way north east to a stone wall between Dod Crag and Goat Crags and the slope steepens sufficiently to shed water more efficiently than higher up. This drier descent followed the wall until it ends abruptly at the top of a short cliff, but the path cuts back into the stream bed where the beck can be crossed and the wall followed again on the other side. By now, a footbridge over the Shoulthwaite Gill is clearly the target and the forestry track leading round to Thirlmere itself was gained.

Maybe it lacked the same sense of achievement or didn’t benefit from extensive views across the fells to either side, but the three-hour walk back along the shore of the reservoir proved to be the most pleasant part of the day. It wasn’t a foot-blistering tarmac trudge; instead it wended its way in and out the woodland. The trees gave shelter as each successive shower drifted across and the time passed surprisingly quickly. There was some evidence of United Utilities making improvements to sections of the path closest to the car parks, but hardly enough to justify the £6.50 they tried to extort from anyone wanting to spend more than four hours there. It was clearly a successfully active attempt to discourage visitors. On a weekend in the middle of August you’d expect more than three or four cars in each car park. The income must barely maintain the pay and display equipment they have installed.

At 3.300pm I arrived back at the car on Dunmail Raise, glad it was over. There had been occasional moments and views to be enjoyed, but, and this is rare for the Lakes, I know I don’t want to revisit this bit again.

so let me get this right - you saw a place on the map called 'The Bog' and thought "That'd make a nice soft spot to camp"?

I've never visited The Bog but found a quite nice route up the long curved ridge via Harrop Tarn onto Ullscarf. That ridge is famously wet though so you did well not to drown.

So the Travellers do sausage and chips now? When I was last there years ago they only did posh food

A fine set of photos, love the classic shot of Blencathra

old danensian wrote:Wet bracken has a lot to answer for - I got caught by the same trick last Monday.

Reading your report made my day look like a walk in the park, i’ve done Ulscarf to High Seat when wet underfoot (a nightmare), if i do the route again it will be in the depths of winter under a hard frost. Well done for sticking with it.

Oh dear, is it really that bad? Thanks for a great read, even if the walk itself was perhaps somewhat less of a pleasure. Definitely not looking forward to these hills now.