Of the three tops that rise above Grisedale Tarn, Seat Sandal must be the least visited. Dollywaggon Pike attracts those heading towards Helvellyn, and Fairfield stands majestically at the head of its own horseshoe. Meanwhile, Seat Sandal seems to sit back, the lesser relative snubbed by those heading for higher things.

But, as you drive toward Dunmail Raise it’s the sweeping southern ridge of Seat Sandal itself that draws the eye. Those who automatically look for lines and routes see this rather than the well-trodden routes up either side of the Great Tongue to Grisedale Hause.

So, with a few hours to spare on an improving Sunday afternoon I decided to visit a top that I too had been guilty of neglecting for all these years, and I could finish off with a descent down that alluring ridge. 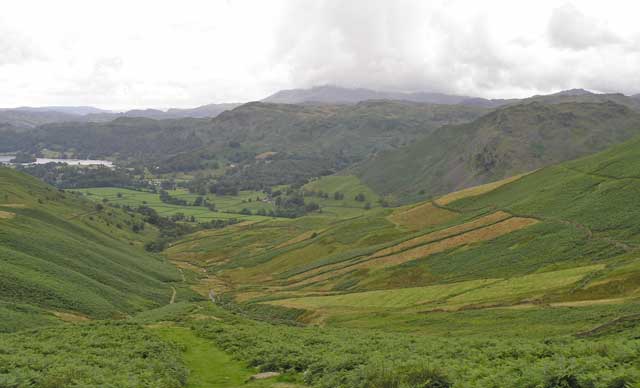 Looking down Little Tongue to Grasmere

There’s little to be said about the route. The track to Patterdale from just above Mill Bridge is well-signposted and well-trodden. For those who like to gain height earlier rather than later, the left-hand option up the Little Tongue is worth following. From the Hause, a quick scramble up an obvious route to the left brings the top into reach within barely twenty minutes. Reclining on the grass or leaning against the stones you can follow the progress of those flogging up the increasingly eroded flank of Fairfield or the Dollywaggon zig-zags. I long-ago decided that once was enough up them unless a particularly severe penance had to be served. For half an hour or more I sat and soaked it all in. Bristles moved like a conveyor belt along the skyline between Fairfield and Great Rigg, and an increasingly long stream traversed from Nethermost to Dollywaggon on their way down. I simply sat and enjoyed the solitude that still exists in the Lakes on an August weekend.

But all good things come to an end and other plans beckoned. As I descended the easily angled ridge, Coast-to-Coasters passed below on their way east: only another 150 miles to go. But nobody was lured up the ridge and I had it to myself. Seat Sandal and fairfield from lower slopes of ridge It seems surprising that Seat Sandal sits right at the heart of so much, yet is passed by in favour of those more spectacular objectives: not that I was complaining. As I negotiated the walls and gates to leave the ridge and rejoin the track into Grasmere I left it with a sense of quiet gratitude and reassurance that such places can still be found.