After debating all week whether to hire a car for the weekend in order to join Gammy and the lads in the Mamores I finally decided that the forecast just did not warrant the 80 pounds or so I'd need to spend to head into the hills. So I convinced myself that I would reserve Sunday for some PhD work and take a long stroll down the Fife Coastal Path on Saturday.

I got an early start, first bus down the coast left St Andrews at 7:30. By 9 I was setting off down the beach from Lower Largo. The wind was brisk but it was surprisingly warm to start the day. The sun would come out in full force eventually and I was roasting by the end of the day. It's a pretty lengthy walk down the beach from Lower Largo to Ruddons Point, but this was my favorite stretch of the day. 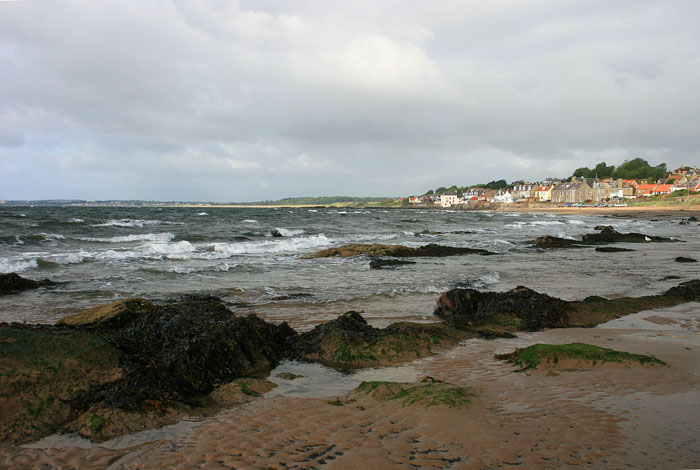 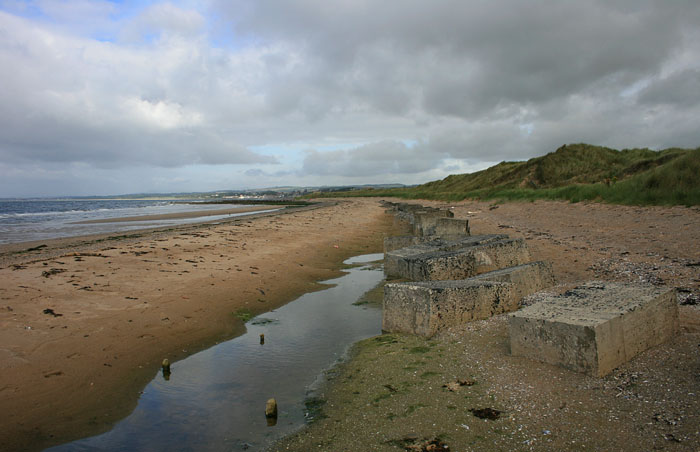 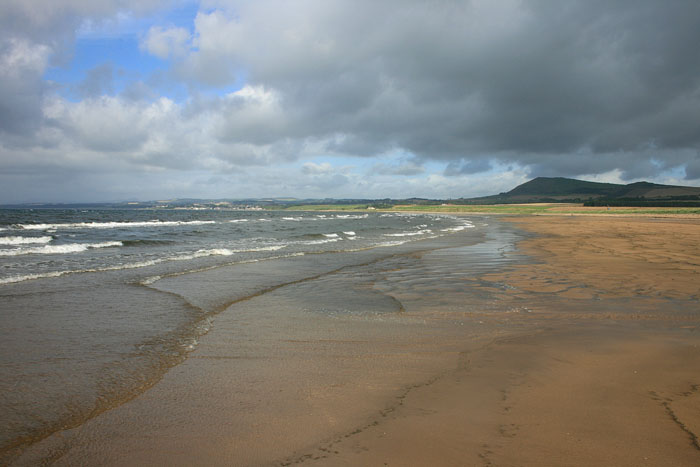 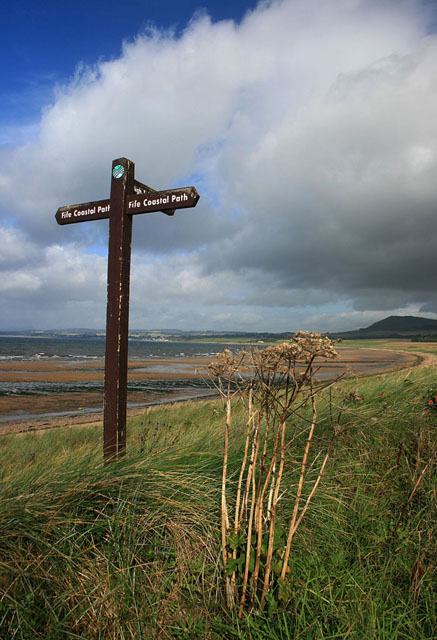 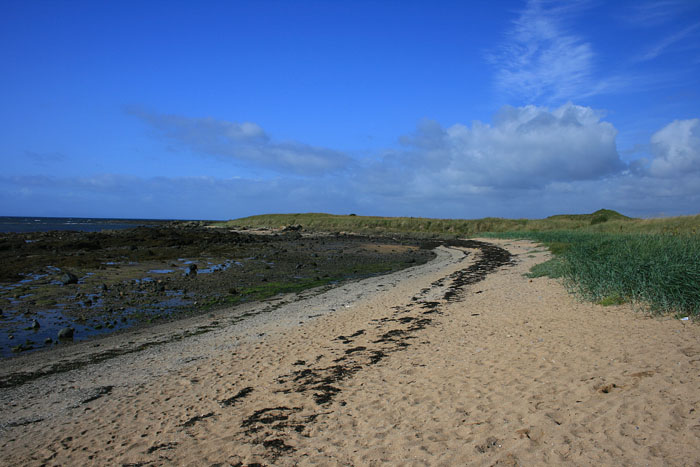 From Ruddons Point it was on to Elie and the cliffs above the chain walk. This is also a nice stretch, at least after you get past the camper park. I have done the chain walk about 5 or 6 times and on this day the tide looked a bit high so I chose to take the high road. Once I came down off the cliffs I reached the beach alongside the Elie golf course and saw what appeared to be a golfer w/bag looking for his lost ball. I figured he would just pick it up if he found it, but no, this guy lined up a shot and did a fine job getting it back in play. On to Elie I went, this is one of my favorite towns along the east coast. The beach was full of kids playing in the sun and sand and it made for a lively scene. At the pier I tried to regain the path by skirting the coast around the lighthouse at the end of town. I cut through the very lower end of some guy's yard and he came outside and gave me hell. I guess he didn't like the look of a giant, hat wearing American walking through the worst bit of his yard. I was rudely redirected to the street. Nevertheless, I finally made it out of Elie and started back on the path for St Monans. 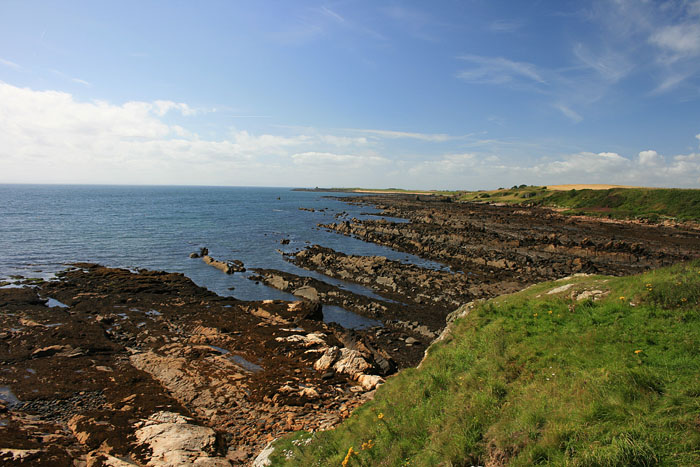 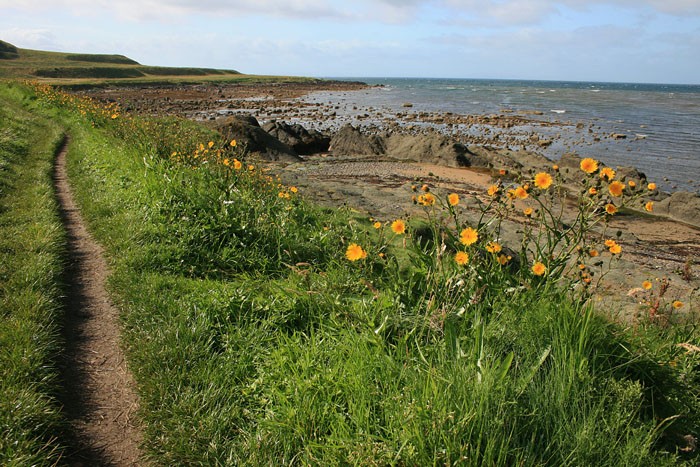 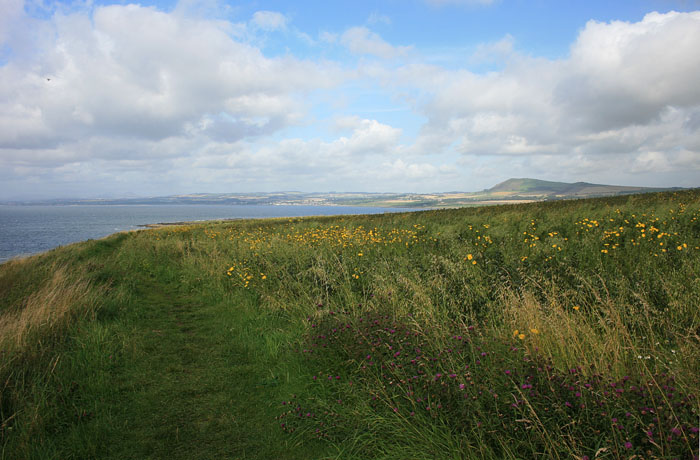 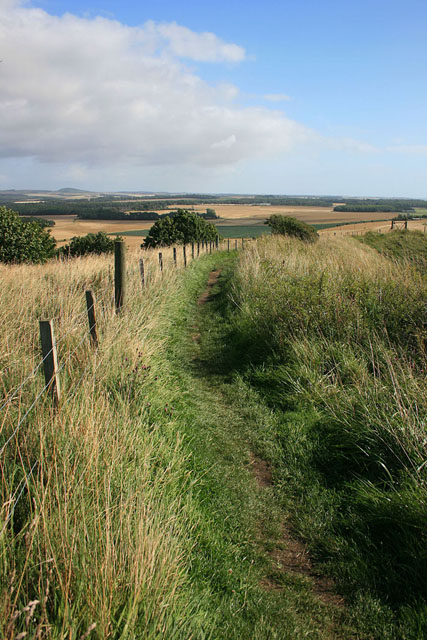 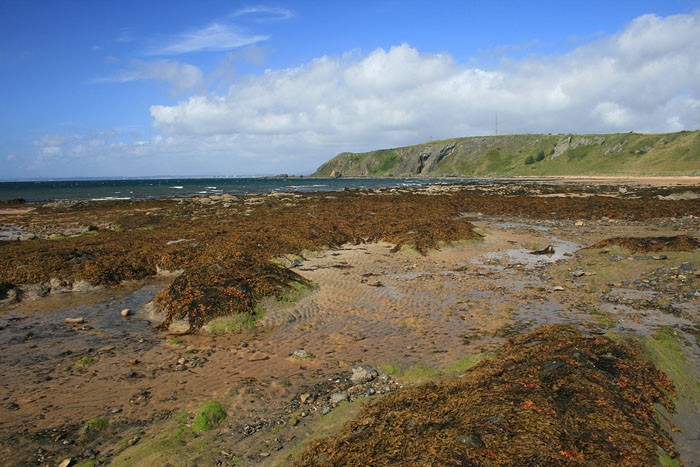 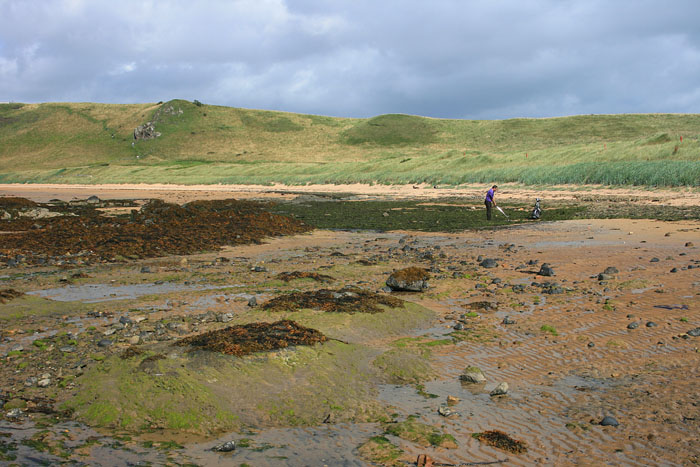 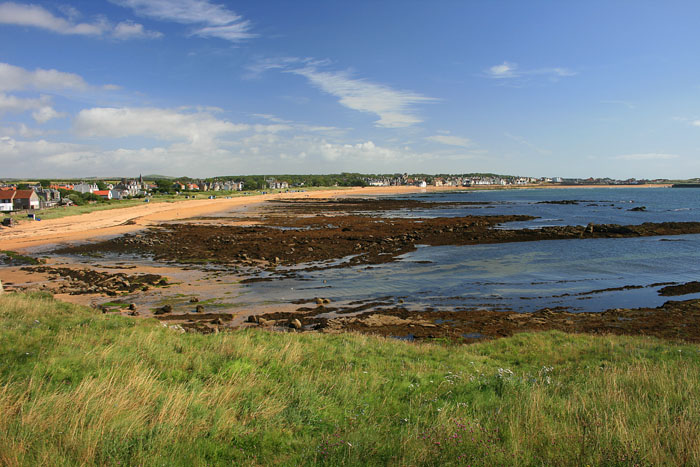 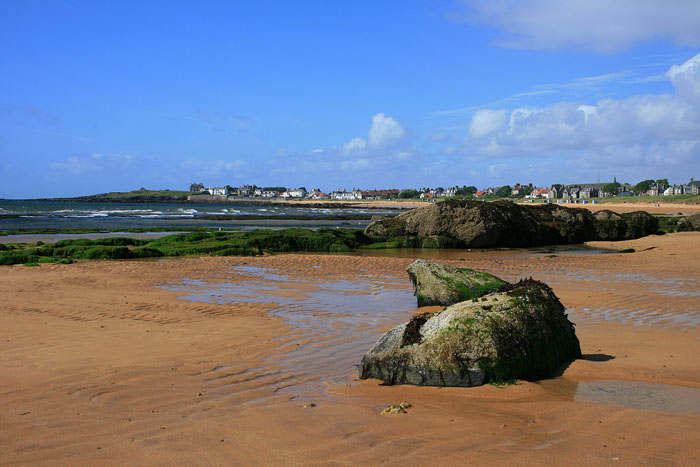 There were more people on the Elie to St Monans section and I passed several groups heading along this stretch. The castle ruins just before St Monans was the main attraction but the 3 caravans parked on the site ruined some angles for photos. A wedding was in progress at the Kirk and a piper was playing in the churchyard. At St Monans I decided to go ahead and walk further on to Anstruther and get a bit more exercise. It was too nice of a day to call it quits. At Pittenweem I splurged on a rasberry ripple ice cream cone, yum. Then checked the bus times for Anstruther and saw that I could get there in time to catch the next ride back to St Andrews. Anstruther was full of folks, so I just sat on a bench and people watched for 30 minutes before catching the bus back. 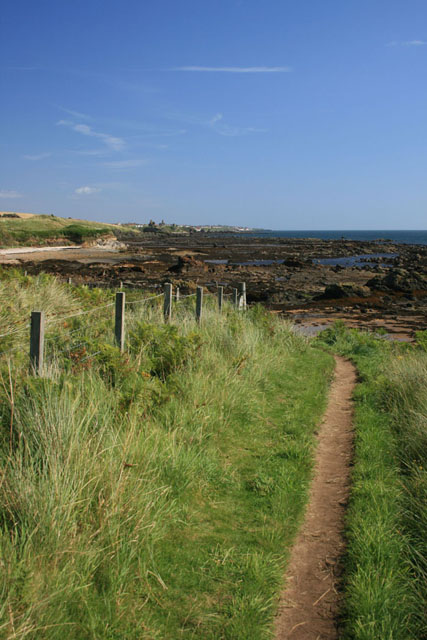 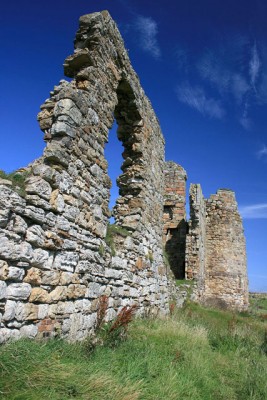 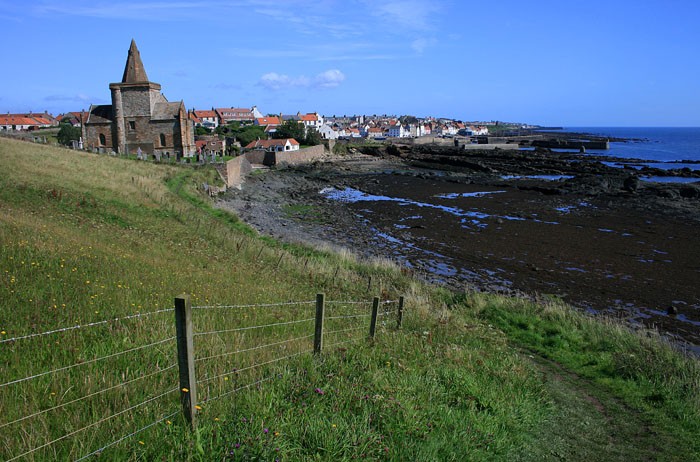 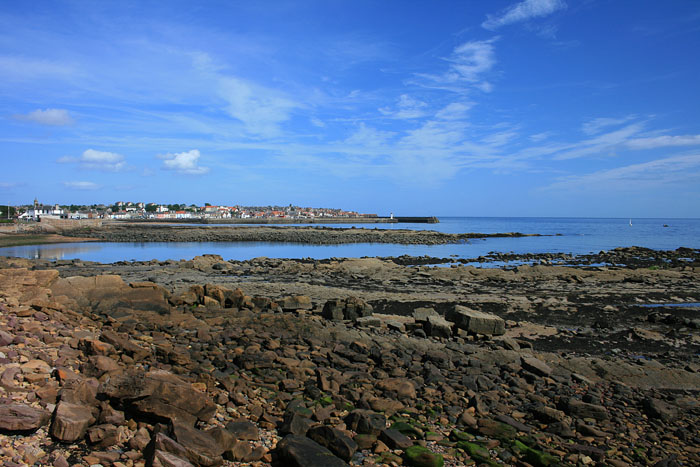 I've now walked 4 of the 9 sections of the coastal path and have really enjoyed these strolls. The section from Anstruther to Crail does not look particularly interesting so I may give that a miss. But I'd like to finish the St Andrews to Newport on Tay section. The coastal path is a great alternative for a broke student who wants to see some nice scenery while his pals are high on the munros. I spent just 7 pounds on this day, but had a fantastic day in the sun.

Missing out on a great day in the Mamores.upsetting the locals,catching a bus,whats happened to you since coming back from your hols mate.Time for you to get your mojo back,fine report none the less.

Some lovely walking along there, Andy

Thanks Janet, those blocks were placed there during WW2 to stop German tanks from making it off the beach should they attempt an invasion. It seems odd though, they only stretch a small distance, so I'm not sure if more of them were put down and later removed or what. I'd say time has altered what they originally looked like as well. Interesting though.

Willie, loan, I mean give me 80 pounds next time

Great report.I just love that coast,so many lovely wee places up that way...looks a lovely walk and one I hope to do soon...well done!!

Thanks for your excellent report on the Fife Coastal Path

Fortunately I have my bus pass so it should'nt cost me a penny, tight b------d

Thank you both! This is a fine section of the east coast and there are some great spots to stop and take in the scenery, birdwatch, or you can dive into a pub or shop in the villages.

An excellent report on a lovely place to walk.

I havent done much walking in Fife although I have been thinking about it for some time. Had my eye on the Lomond Hills but your report is making me think I should do this coastal path instead

Was lovely down the East Coast Saturday, as your report proves.

I had lunch in Aberdour bay before spending some time in St Andrews.

I forgot my camera so thanks for posting this

Hi andy,looks like you got cracking weather and views looks a great area glad you are back and posting ,no report about mcd's before and after walk though you feeling ok? mate

Looks a nice stretch of coast. When I can't get to the hills I wander around the coast up north between Findhorn and Hopeman.

Loads of anti-tank blocks here. I think this is where they practiced for D-day landings Nice one Stretch. Not your usual sort of TR, but good though!

James, it's a probably a good thing there is no McD's anywhere near St Andrews! I allow myself to stop at the one in Perth from time to time though

Morag, I've done the Lomond's as well, it's a good little walk and the views are nice.

Pity you couldnt join us this weekend hopefully next time

Great photos and smooth words. Thanks.