After our last aborted camping trip in Glen Shiel(ended up in the Claunie)it was all systems go with this one.Me,alan s & jb left mine about 6.10pm,stopped at Tyndrum for fish supper and arrived down in Glen Etive about 8.40pm,next task was finding a pitch as it was now getting dark,with rain threatening,but we managed to quickly find a pitch and soon had the tent up then set about organising the inside Weather at this point did not look to great,but we had hope it would get better as the day wore on ,so of we set heading up the landrover track The track and path make for easy going,where you soon come to a small cairn,take the path here to the open hillside Soon you get your first view of Loch Eildie Mor Still fairly easy going at this point,but for some reason my gammy ankle was starting to play up at this stage,this was to shorten my day later on.
Still lots of low cloud and a strong wind yet,but it did not take us to long before the shape of Sgurr Eilde Mor came into view 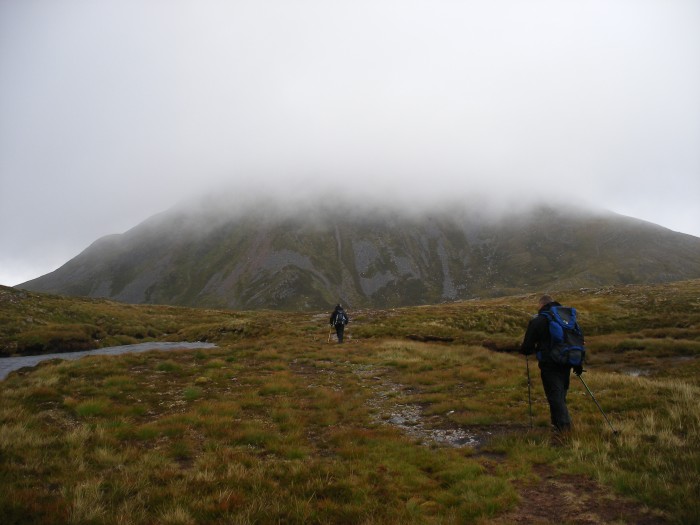 and also the wee lochan of Coire an Lochan 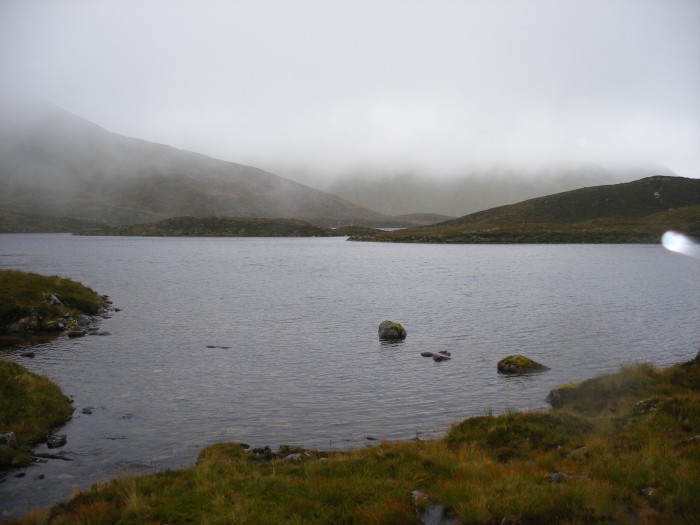 and soon after that the sumit of Sgurr Eilde Mor No stopping here as the wind was still blowing hard,so we dropped down the southwest spur and made our way across to Binnien Beag,where at last the better weather we were hoping for was starting to arrive 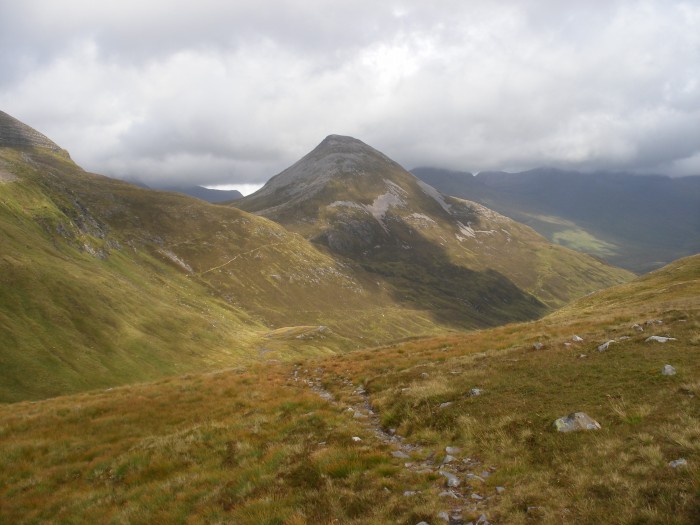 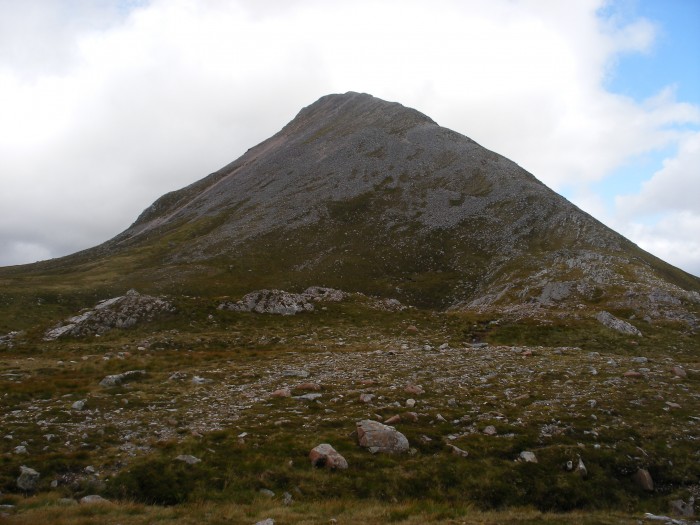 The views were now starting open out,with the clouds lifting,this gave us a view over to Ben Nevis A fairly stiff and steep pull up Binnien Beag,but all the effort was worth it with the views we were now getting all round,and would you belive a summit pic with no clag 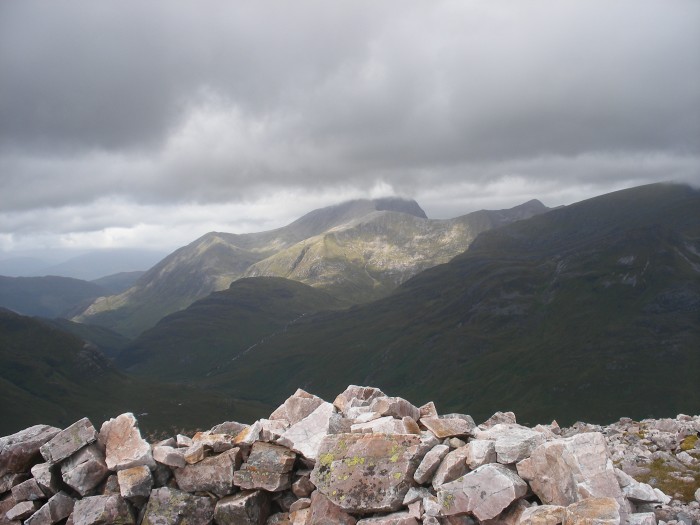 Sadly this was to be the end of my bagging day,our intention when we left the car was Sgurr Eilde Beag,Binnien Beag,Binnien Mor & Na Gruagaichean,but the pain in my ankle was now becoming to painful to allow 2 more accents and more to the point 2 more decents,so reluctantly once we had dropped back down of Binnien Beag,we went our seperate ways Alan & James for Binnien Mor & Na Gruagaichean and me heading back to the car.
This was my 3rd weekend out on the trot, and my ankle was really feeling the effects of working all week then out hill walking at the weekend with no rest in between,so thought it was better to bail rather than push and suffer later and maybe have an enforced lay off which I do not want or need before my mate stretch heads home later in the year.I suppose walking on my own does have some advantages,slower pace,more time to take pictures before I arrived back at the car 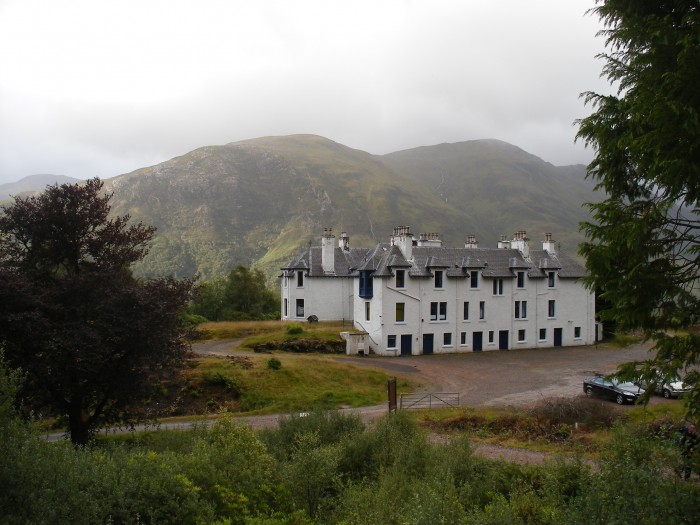 Mamore Lodge through the trees

Got back to the car,quick change,sank the last of my beer and waited for Alan & James to appear,which was not long behind me

two very tired walkers who had hammered the last two,and ariived only 40min after me.All that was now left was back down to Kinlchleven,into the chippy for dinner before the drive back home,with Alan giving it big ZZZZs on the way home Nice report on what looks like a good walk, pity you had to cut short your day, but your right best to look after your health and save it for another time.
You still got some nice photos of the views, hope the ankle recovers.

Haha, yer mate will love you for that zzzz photo. Hope the ankle improves with rest. Ye've fair been tanning the M-points though.

MarilynMunro wrote:You still got some nice photos of the views, hope the ankle recovers.

Cheers MM,done a fair bit of walking this year,so guess I"m paying the price,anyway back to the views,they were great.

Hi mate ,you got some good views on the way back ,you did the right thing going back the pathless descent off Na gruagaichean was a killer on the feet , another two in the bag for you ,enjoyed the company cya soon

Well done on another 2....and a clag free view

kevsbald wrote:Haha, yer mate will love you for that zzzz photo. Ye've fair been tanning the M-points though.

The mate is my son-in-law Kev

dooterbang wrote:Well done on another 2....and a clag free view

Ta doots,just wish it was another 4

JB likes a beer wrote:Hi mate ,you got some good views on the way back ,you did the right thing going back the pathless descent off Na gruagaichean was a killer on the feet , another two in the bag for you ,enjoyed the company cya soon

Just keep healthy mate and give that ankle a wee rest ,give you a shout in a couple of weeks,try and get something organised

JB likes a beer wrote:Just keep healthy mate and give that ankle a wee rest ,give you a shout in a couple of weeks,try and get something organised

Ohhhhhh your mate looks far tooo pleased to see you getting into the tent!!!!!

pollyh33 wrote:Ohhhhhh your mate looks far tooo pleased to see you getting into the tent!!!!!

A rarity report - Gammy at a clag-free summit!

Well done - closing in on that century now!

Pity about that GLW - hope your ankle gets better soon. Nice report despite the mixed weather - was over in the east yesterday as the weather there was supposed to be better but it turned out the same as yours anyway

Must have been cosy in that tent, doesn't look big enough for 3. As for your ankle, i too have a dodgy ankle which i wear a aircast ankle support from physio room, don't know if this would aid yours. Liked the report, brings back the memories when i did them.