On deciding to initially walk in through Benmore Glen and ascend Stob Binnein first, proved to be a good straight forward day out with very few if any real heartache.

We set out at 10am exactly from the traditional starting point at the layby just past Benmore Farm's green barn doors. Climbing the stile onto the track then walking the farm track to the gate at the start of the Land-rover track gives you the first glimpse of the might of Ben More- more of that to come but seeing the ant like figures of those brave souls on this ascent gave some perspective on how steep this mountain is!

Onward southwards from the farm gate and into Benmore 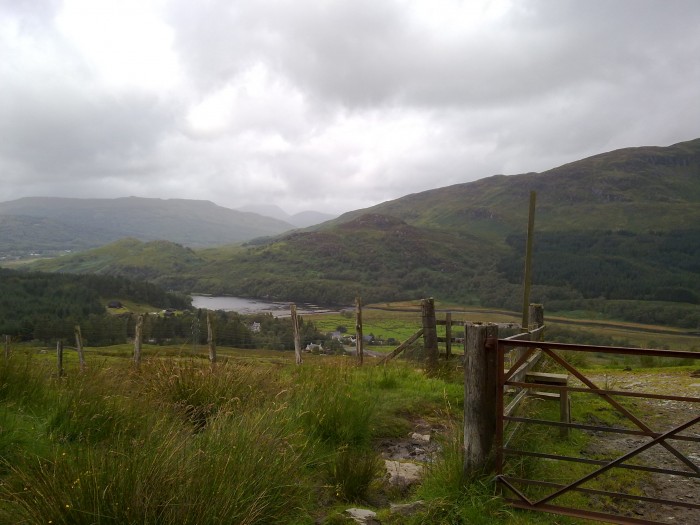 back view to farm

glen for a gentle pre amble along the good track that traces the bottom of Ben More to the left and follows Benmore Burn to the right. This is a chance to gather yourself and generally get the legs warmed up!You can go straight up Ben More from here just after the gate if you're feeling masochistic but I had planned on this route which takes in great views up towards Stob Coire Bhuidhe and Stob Garbh which hides the conical of Cruach Ardrain which doesn't come into view until the ascent at 700 meters-ish. Ben Tulaichean peeks out around the 600 meter mark through Glen Inverlochlairg. Getting to the point above the defunct footbridge over Benmore Burn (there's a path down to the right but take the rising land rover track to the left) means its getting near ascending time! stob binnein from above footbridge

Continue on by this intersection on the land rover track until the track runs out after 200m beyond the intersection. Here you'll see a falling stream coming down from the oaxster of Ben More. You can go further on beyond the track into the grass for another route, but here was as good a place as anywhere to start going UP!

Immediately a track is obvious parallel to the right of the straight falling burn. Easily follow this path with no severe issues in ascending. The path moves off to the right at the first rocky outcrop but falls back in thereafter. It is steep but in comparison to the Ben More ascent it's much more sedate. The land rover track remains for ever in view below and quickly becomes a pencil line as height is gained quickly. You'll get to a point where the path seems to end and becomes grassy on the ascent. go right as path drifts and fades a little

You'll see a milder track off to the right which begins the process of traversing right at an easier angle- 15%- 25%??? (roughly when Ben Tulaichean summit comes into view fully) 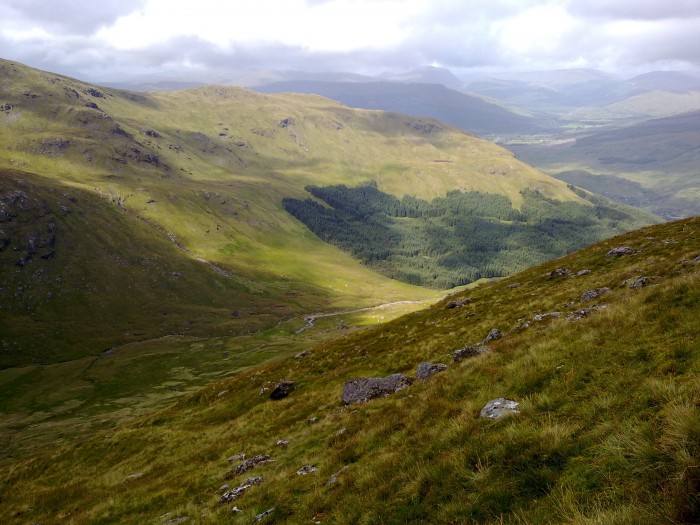 From this point you're 30 mins to the bealach and the views over to Cruach Ardrain through Inverlochlairg Glen are spectacular as is the shark fin like Stob Binnein directly looming over you ahead and Ben More's shoulder behind to the left. From here we could see the summit just being caressed by mist and spot those ants ascending and descending clearly on the visible zig- zag track up to the summit and down. It is quite simply a beautiful looking hill! Cloud shadows bring it menacingly to life and provide it with a multi- personality as the switching light takes it from growling auld uncle

to nice papa in seconds! ) and Stuc a' Chroin. The bealach provides a saddle a good gathering point and fine views of the final ascents to Binnein and More. The wind was ferocious for us at this point as you're exposed from east and west as the wind whipped in from the west. The ascent of Stob Binnein is straight forward with a good path- gravel in places- meandering up the crest of the dorsal fin Binnein. No problems at all on this and the ascent is completed in 30-40 mins at an ambling pace (our group stragglers in 40 mins). No scrambling, no real drops, no route deviation for difficulties, just plain old ascent and time to enjoy the growing views all around. Loch Tay glittered in eastern sun with Ben Lawers shoulders and summit overseeing its watery neighbour through quick passing cloud. Lawers shares Loch Tay's Northern shore with its six other Munro brothers. Ben Vorlich (Loch Earn) and Stuc a' Chroin provide the comedy duo as the odd couple in the SE as they are not similar in anyway in stature for near neighbours. Ben Chonzie standing alone can also be seen directly east. Benvane and Ben Ledi are southward chaperoning Loch Lubnaig overlooking Callandar but they all disappear from view as the eastern steep slope of Stob Binnein curtains out this view. The summit of Binnein offers extensive views NE & North also looking NW down to the land rover track on the way in and out towards Crianlarich and Strath Fillan leading the eye towards the Tyndrum collection of Munros and special guest star appearances of the Bridge of Orchy gang in the cloaking distant cloud. Looking southward will see you stare into Inverlochlairg glen and the eye follows the path towards Stob Coire an Lochain as it tumbles off down towards Inverlochlairg- another potential route up. Ben Lomond's shoulders appeared every now and then being unveiled and re-veiled in the switching swithering sun light. south over stob coire a lochain

to the bealach then upwards again for another 300m-ish ascent to Ben More. This ascent is more direct and in my view steeper (my mates disagreed and thought was the same as Stob Binnein) as it doesn't meander as much(reminded me in sections of Ben Vane (Arrochar Alps).The summit of More comes into view to the top left 11 o'clock position after passing Creag Tharsuinn (the shoulder hides the peak and the outcrop in advance of the summit) Go right on obvious path to avoid scramble over corrie

and then you'll view the trig point and the rock shelf it sits upon to your left. 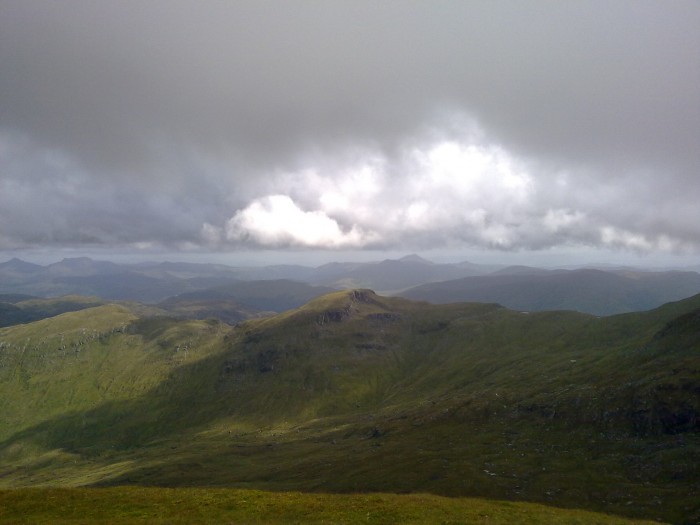 Ben More summit is smaller and thinner than Stob Binnein and has a stone cairn at its northern end in symmetry to Stob Binnein's southern end. Views down to Strath Fillan are outstanding and the views SE more extensive. Ben Lui and co are more visible as not being blocked by Stob Coire Bhuidhe or the lesser Creag a' Phuirt as from Stob Binnein approach. You could dive off Ben More's northern edge into Loch Iubhair such as the steep face down towards it. The river Dochart takes up what the river Fillan was doing entering Loch Iubhair on the exit of the loch as it snakes off towards Killin. Stob Binnein fills the vista southwards as voices of others who have ascended Ben More from the NE farm track bemoan their toil and seem envious that our route was less taxing than the 1:1 at times steep ratio of the approach from that direct route. Indeed the other two groups on top we met declared that they would not ascend Stob Binnein such was their taxing. They were encourage by us to, but we met them after we descended More and they confirmed what they had declared earlier and took our route up as their exit to the Land Rover track.
I didn't take any photos of ben More summit but there's enough photos on here so no repeating. I did take a video which ate up my remaining battery power.

taken for ascending it. On looking back up towards the summit before the dyke it is indeed a wall- sheer. Height is lost quickly on a direct route down (an up vice versa) which was completed in an hour to get back to the land rover track before the farm gate. Boggy at the bottom and slippy on the final third of the hill. Back at the car for a 4.30pm finish and headed to the Drovers for refreshments.

But what a majestic mountain Ben More is. it fills the vista to the SE of the A85 in/ out of Crianlarich. A view as you look over your shoulder back towards Ben More that you were glad to have conquered and been part of. Stob Binnein is hidden down the glen but is in my mind a sculptured hill- cut out by someone with a shark fixation (oh not again dun dun..dun dun..dundundindundindadun-dundadun..doodleoo-doodleododoolo - jaws music

) "we're gonna need a bigger blog"). Enjoy both mountains regardless of what route you chose. Great photographs and a a fantastic description of your walk, which will inform other baggers should they choose to climb these magnificent hills. Thanks DTC

I was on these two hills on Saturday as well

I ascended from the south (Loch Voil) and decended down the northeast ridge of Ben More
Unfortunately I hit the conifers a bit astray ,
I will know better next time and there will be a next time as that route is the gentlest by far and would give a good ascent .
It is a bit rocky near the top but not a scramble by any means