started by parking one car at the car park off the A85 at glen lochay then drove round to the car park at dalrigh to start the walk to beinn dubhchraig.the waterproofs where on from the start here as the weather was pretty miserable with a low cloud base and heavy drizzle.followed the road over the west highland way with the railway to the left until you cross a bridge over the track following the path until you reach a small cairn marking the way down to a really unstable bridge that looked like the romans built.
the next hour or so wasnt great with one of the worst paths i have followed with water up to the ankles in some parts,really hard going here which was made worse by the heavy rain in recent weeks.
the only good thing aboout this part of the walk was the cracking wee waterfalls.
once out of the trees the slopes of beinn dubhchraig come into full view with the first steep climb not far away.
the weather was at its worst here with high winds and heavy rain so a quick ascent to the summit and down out of the wind to head for ben oss.be carefull here not to miss the cairn marking the way off the stalkers path to the slopes of ben oss as we done

the heads were down and we never noticed this until the cloud lifted and i noticed loch oss to my left,just to be sure i checked my mobile where i had filmed the route from virtual highlands from this site on to my phone and noticed where we went wrong,a poor mans sat nav

(i left my waterproof map cover in the car oops)
around half an hour wasted here so headed quickly up the steep slopes of ben oss where the rain and wind had died down and the cloud base slowly lifting we had to make the choice to turn back or head to ben lui.
after a break we headed for ben lui down to the col from ben oss when all of a sudden the cloud started lifting quickly and we were able to see our route up ben lui and finally got a chance to get the camera out the walk round the coll from ben oss was great with no more boggy paths but as you approach ben lui you can tell its not going to be easy,a real hard slog up the slopes here which seemed to take forever a good feeling of acheivement here with a good rest and first class views all round,one of my favourite munros and one i was glad to have done 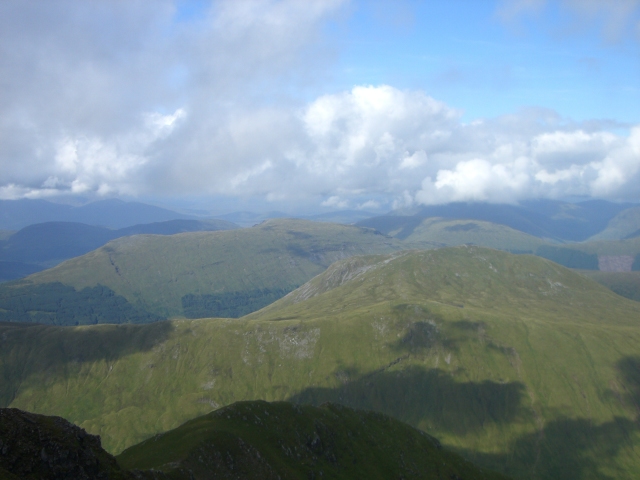 didnt hang around here to long as time was getting on so back down and headed for the forest back to the car park.
the walk through the forest was one to forget and i knew there was a slightly better path than the one we took but if theres a path to be missed im certain to miss it

not a good route here for dogs as we were to find out there is a stream here that joins the main one and you have to cross it which was very difficult with a stubborn collie.
was glad to get out of this but there was good views back up to beinn a'chleibh and some more nice wee waterfalls altough the river was high due to the rain and we did get soked as the water was about a foot high,wasnt bothered by now tho oss to lui.gpx Open full screen  NB: Walkhighlands is not responsible for the accuracy of gpx files in users posts

good stuff sticking it out we were on gairich ..see my report and the weather was awful for 3 solid hours...no views at all..so gr8 stuff getting the look off Ben Laoigh

some gr8 pics as well we done it in winter ...was one of the most amazing days i have ever been out...right up there with the best...

on way back down you weren't sure about route through forest? Did you head straightahead from the bealach between Ben Lui and Bein a Chleibh, or head to your right and through forest track that way?

To be honest it wouldn't have made any difference as both paths are almost as muddy as each other so no gain/loss either way as they both join together further down anyway.

thanks munrowalker
i headed straight down from the bealach to the forest to an opening at a fence here. i had seen the path to the right but chose just to go straight through,i had read the other way was slightly better but if you say its the same then i dont feel as bad

im sure i could have found a shallower bit of the river to cross but by that point i wasnt caring it was nice and cool on the feet,my boots are still drying (and legs still aching)