An Caisteal & Beinn a' Chroin

An Caisteal & Beinn a' Chroin


from the traditional starting point from the A82 layby 1 mile-ish before Crianlarich you can see Sron Gharbh the opening gambit on the way to An Caisteal & Ben a' Chroin. taking the track under the west highland railway line opens up the Coire Earb which in this instance will be the exit off from Ben a' Chroin. Note that this is a bog slog and if considering going in this way be prepared fro 3 miles of toils as the ground gets very heavy- even on a good day that we had! Once past the gate we turned upwards, however I think in retrospect it would be better to start onto sron gharbh sooner. past the gate and turn right upwards. maybe an idea to go up sooner before the gate?

Views open up immediately back northwards to the Tyndrum hills and Ben Lui to the NW.

Looking south westwards on sron gharbh you take in the twin peaks of Ben Vorlich & Ben Vane which straddle the hidden loch sloy between them. 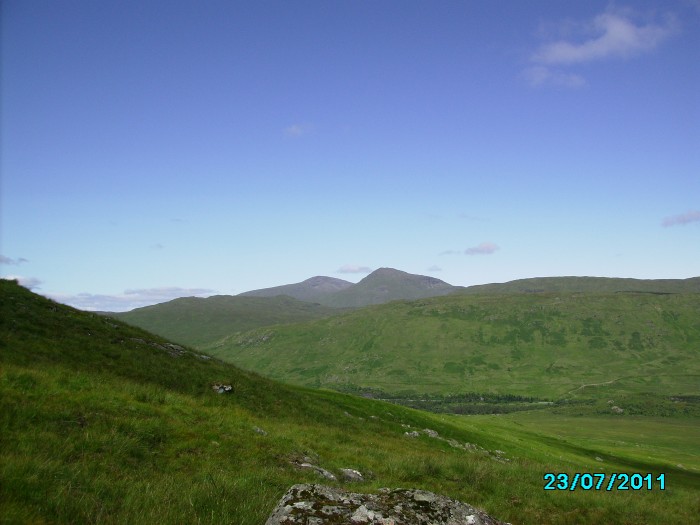 Turning your head eastwards opens up some other Crianlarich neighbours. After gaining height with the direct ascent and on finding a worn path to the foot of sron gharb at 600m you'll see this minor peaks summit. Twistin Hill seems a very 2 dimensional description as not only does it twist but dips and rises as well as....well twist! The roller coaster that is Twistin Hill. first full view of An Caisteal summit

The summit of An Caisteal fills the vista mid way through Twistin Hill and makes the approach on a good fine day very enjoyable. Twistin Hill deceives as it goes on longer than it looks as the dips for-shorten the track to the base of An Caisteal summit.
getting to the summit has one slight well... twist in it as a rock out crop 500 meters from the summit provides a technical scramble. Don't look left as a sheer drop may make you panic. it is possible to go right but quicker perhaps to take the direct approach?
An Caisteal summit on a clear day looking southwards to Ben Lomond looking down to the Bealach Buidhe is deceiving from this vantage point as the hidden corries cannot be seen or appreciated at this point. there's hidden steepness down there!

Its nice to meet some 'burds' when out and about yer no gettin a bit! NB my digital camera defaulted to its original date!

NB I changed battries in my camera which defaulted the date!

heading for the bealach is not a straight forward affair as some technical scrambles intertwine with a steep decent of some 100 meters or so. can be a bit treacherous so watch the footing. looking back to An Caisteal summit from bealach technical scramble 3/4 the way up to Ben a' Chroin which takes a bit of effort and maybe a helping hand?

there is one scramble on the ascent from Bealach Buidhe that once over is the last technical part of the day. The initial summit of Ben a' Chroin opens up a 3 summit plateau stretching for 1.3 KMs. The final 3rd summit comes after a 50- 75 meter drop from the mid summit then back up. Its worth doing the 3rd but the middle summit is deceptively the real summit. Otherwise if stuck for time you can walk of to the left in the gully between mid and 3rd summit. Looking east wards on initial summiting of ben a' Chroin. Stuc a' Chroin popping round to say hi An Caisteal looks rugged and bulky mid summit of Ben a' Chroin with the impressive Stob Binnein summit cutting a dorsal in the near distance. Ben More to the left Good descent with no issues

to combat the gradient. No real scrambles or issues all the way to the Coire Earb and Glen Falloch beyond at the end/ start of the walk. down time now and An Caisteal is stealing the show

The Coire Earb is the glen between An Caisteal and Stob Glas and Cruach Ardrain with Ben a' Chroin crossing it and capping it off across its south east end. it is a bog slog even on the dry day we have. it's deceptively long and will drain any last energy you have. You'll be glad you didn't enter this way!The river falloch collects the minor burns water and you'll see it develop to a proper river as the bog slog goes on. You'll meander between bogs to find drier ground. Gators and water proof troosers are a good option to put on at this point! The look back towards Ben a' Chroin closing off the coire earb at the SE shows how dramatic and deceiving this munro is as it has no pinnacle and is a plateau. The flattened plateau that is Ben a' Chroin

Overall a very enjoyable day on the hills in good weather. Probably my favourite day (I've written tis post after my Stob Binnein & Ben More day I've blogged that also)as the hills had the ridges of Twistin Hill and the wee technical scrambles and a couple of sheer drops to keep one on their booted toes. Re: An Caisteal & Beinn a' Chroin

Nice report and pics there