One walk 3 days and Ten Hewitts

One walk 3 days and Ten Hewitts


Set off from the walkers car park about 12.30 Saturday 6/8/2011, planned to have 3 shortish days walking as weather supposed to be quite good from mornings to mid/late afternoon so planned to have tent up by 5ish.

our_route.gpx Open full screen  NB: Walkhighlands is not responsible for the accuracy of gpx files in users posts
Within 15 mins of starting off the first shower of the day arrived so it was A. get wet in the rain or B. sweat in waterproofs, I tried the latter but after 5 mins decided rain was best. Back towards car park The track up the hill side

The rain soon cleared as I made my way steadily uphill to join the Forrest Track. I followed the track through the Forrest (Mainly Felled) to its end then just carried on in the same general direction as the track the the first top of the walk, Pen y Brynfforchog. Just off the top the map shows a track going through woods towards Glasgwm. Don't bother with it, it's not there, follow fence north then east changing to northeast to the top of Glasgwm. After some nice easy walking with only one or two boggy bits I soon arrived at top No 2 and my spot for the night. From summit No 2 towards campsite for the night 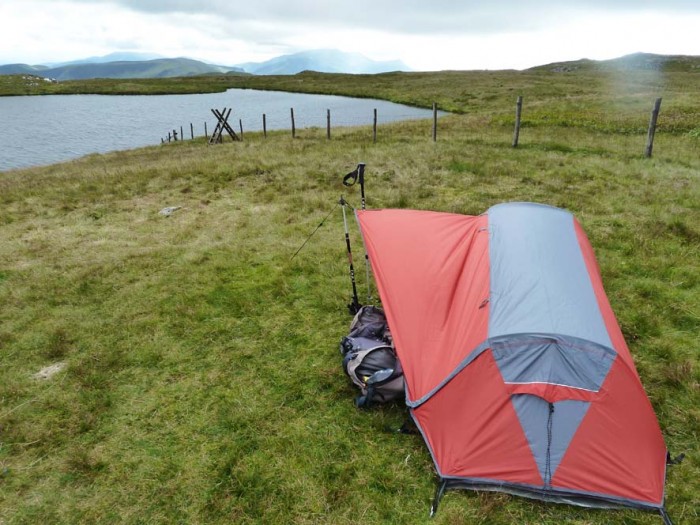 After a Cup A Soup and a Lancashire Hotpot (Look what I Found range from Sainsburys, and no I do not work for them I'm actualy a Bus Driver) I settled down for a good nights sleep, soon to be disturbed by about 12 people on a Outwards Bound course, to be fair to them they were only camped about 20 mtrs away and after they had passed my tent I did'nt hear a thing all night (my snoring might have kept them awake though).

All packed up and set off by 08.30, cloud not lifted yet so started in full waterproofs. The cool and misty way ahead

I followed the fenceline northeast to SH 842 119 and at that point crossed over the fence so the fence would be on my left, this was followed roughly to SH 581 208 where you will find a line of old fencepost's heading southeast to the top of Gwaun y Llwyni, 3rd top of the walk. I then headed north then northeast to join the track that comes up over Drysgol, then head north to Aran Fawddwy my 4th top. from here it was continue along the ridge northward to the tops of Erw y Ddafad-ddu and Aran Benllyn tops 5 and 6. From Aran Benllyn I retraced my path back towards Erw y Ddafad-ddu then took its southeast ridge down to Creiglyn Dyfi and my stop for the night. I walked round to the far side of Creiglyn Dyfi to find a fairly level piece of ground for my tent. Heading down to Creiglyn Dyfi

Tonights meal was again Cup A Soup followed by Beef in black porter and by 6pm I was lay in my tent listening to the wind, but no rain yet.


After another good nights sleep I was off by about 08.30 again heading for Foel Hafod-fynydd From the top I headed just south of east to SH 883 225 then went steeply down to Bwlch Sirddyn then took a diagonal line right, partway up then struck directly uphill to the summit of Esgeiriau Gwynion, 8th top of the walk. From the top headed southeast to pick up the fence and followed it southwards to Llechwedd Du, it was along this section at about 11.30 that the rain started so it was waterproofs from now on. From here it was head east over boggy trackless terrain to Bwlch Groes and cross road following a well made path to the summit of Moel y Cerrig Duon the final top of the walk, then retrace my steps to Bwlch Groes, where Angie should be waiting for me. Whilst some of these top seem uninspiring the walk is brilliant, you get solitude and a sense of wilderness but you are never really to far off the beaten track.