Having bathed number one son Tom and read him a bed time story or three, I drove off into the dark from Edinburgh across the Forth Bridge, through Fife and up, up, up the A9; left at Dalwhinnie before finally skirting round the edge of Loch Arkaig practically to the end. This is my last outing before the arrival of my second born. I'm keen to make this one count, because it could be a while before I get the chance to hit the wilds of Knoydart again.

At midnight, I stuck up the tent feet from the lochside and settled into a nice deep sleep. 6am and I'm awake. There's always a sense of childlike wonder when you wake up somewhere you arrived under cover of darkness and peak out the tent to see where you are. Needless to say, I was not disappointed. Stove top coffee pot out, porridge under way and before you know it, it's 7am and time to hit the road.

I had the MTB to eat up some of the miles up to Upper Glen Dessary; as I pedalled up the road, there's a constantly shifting cloud, alternating between dappled sunlight and rainbows on the surrounding landscape. It's not going to be a day of 360 degree views from the summits, but everything is moving quickly enough that over the course of a day, I'll miss nothing.

Bike gets ditched just before Upper Glen Dessary, and it’s a boggy, soggy hike to the foot of Sgurr Nan Coireachan. From there, it's a 700 metre unrelenting climb straight up to the summit ridge. I console myself with the fact that once I sweat this climb out, the walk across the tops will be a breeze in comparison. Once I'd made it up and was gazing in towards Knoydart and Loch Quoich, you can't help but marvel at the utter beauty of the place. Scotland has some lovely corners, and this stands up well to some of the better known spots. 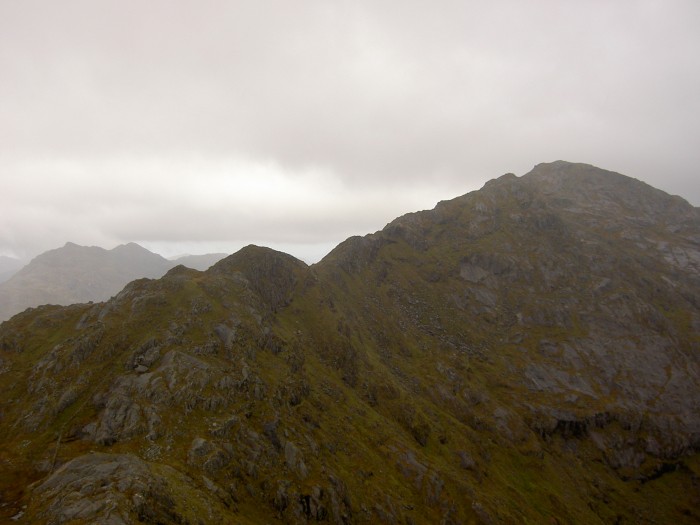 The descent from Sgurr Nan Coireachan to Garbh Choich Mhor looks easy enough; there's no navigational difficulties. Follow the ridge down, climb up the ridge to the summit. But it's slow going. It's not steep or hard, just that in the intermittent drizzle, that every step onto rock has to be considered and balanced. Eventually, I hit the summit and the views towards Barrisdale are great. There's a copy of Ring of Bright Water lying on my bedside table, nearly completed and that was part of the reason for coming to these hills - to try and get a flavour of the place Gavin Maxwell so eulogised in the book. And after the slog up Garbh Choich Mhor, the trot up Sgurr Na Ciche is surprisingly quick and painless. As the endorphins kick in and the sense of achievement gives you a further boost, there's the descent down the rocky ravine before the mammoth bog trot home. As you turn the corner at the foot of Garbh Choich Mhor and traverse under the crags, you can just about make out the woodland that is halfway home. It's the one soul destroying bit of the whole endeavour, but you're soon over it and engaged in a long trudge homeward.

When I get to the bike, it's a tail wind assisted downhill run to the finish line. Just time to marval at Streap peeking around the side of the glen opposite, and it's off back to domestic bliss and urban delights.