A terrific summer’s walk, venturing into the Lakes for the first time this year and starting with their most popular peak.

our_route.gpx Open full screen  NB: Walkhighlands is not responsible for the accuracy of gpx files in users posts
From an overflowing carpark in Glenridding, well-made paths head west up the beck’s broad and handsome valley – the way up by Red Tarn Beck below Sheffield Pike seemed much less popular than the alternative, but still it’s hardly quiet. Although this isn’t Catstye Cam’s best side, that peak still towers dauntingly above from quite early in the ascent. From the bowl formed by Red Tarn you get the first proper view of Helvellyn, and – while it’s a great climb and a wonderful summit once you’re on top – it isn’t really much of a looker next to Catstye Cam, a square lump next to a proper ‘mountain triangle’. A nice path heads steeply up through the rocks to the latter peak, which you seem to have reached from the starting point with very little effort. 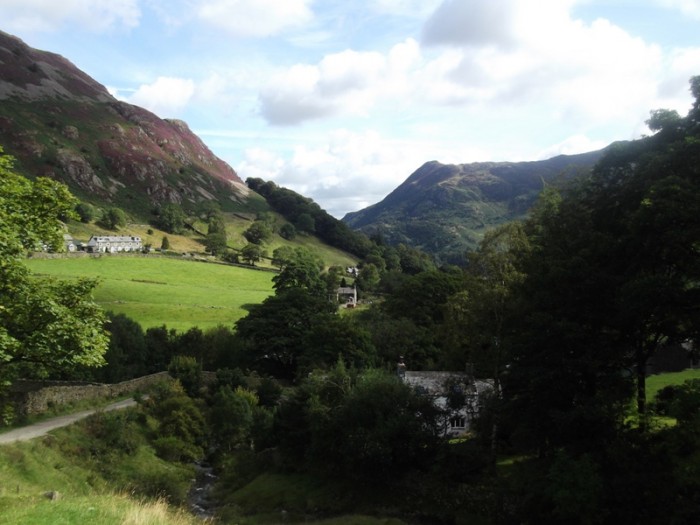 It’s a good challenging walk from there up Swirral Edge – a slightly less-exposed ridge than it looks (the more famous Striding Edge looked quite tame too, but perhaps just from this side-on angle), and then an interesting steep final scramble with plenty of route-choices. The very broad and flat (and busy) summit plateau is a lovely place to wander, quite clearly higher than anything for miles around and so a terrific viewpoint. North-west fells in close-up from below Helvellyn 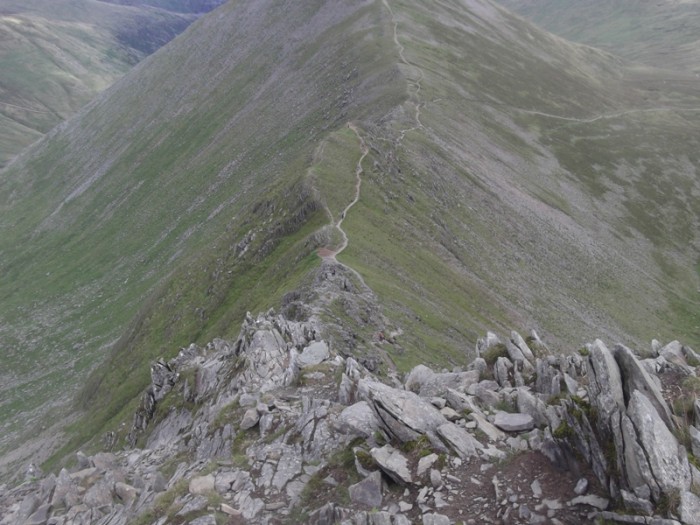 Skiddaw & Blencathra over White Side People were descending from Helvellyn in, seemingly, a dozen directions, but perhaps fewest along its northern ridge. The slopes over Lower Man, White Side and Raise and then down to Sticks Pass are gentler and grassier than earlier, and the walking easy and free from obstacles, with good views both to the north and to the peaks visited earlier. Raise from White Side View back to Helvellyn The path down beside Sticks Gill is clear and dramatic, crossing a sequence of streams tumbling down from the north, and the surroundings suddenly quiet and unfrequented. From the quarry at its foot though, the stoned paths disappear and the route up Sheffield Pike is a bit of a boggy plod. A lot of walking in the Welsh hills rather immunises you against the pain of this, but it’s still a bit of a shock on this route given the nature of the earlier going. The actual summit of rocks amid the colourful heathery flora is quite pleasant, with a great view of Ullswater, but it’s a brief oasis with the descent to the east again marshy and unpathed, and also awkwardly steep in places. The only unpleasant part of the walk is over quickly though; you can pick up a good path from the col below Glenridding Dodd back down to the valley. Ullswater from near Sheffield Pike Few will perhaps need convincing of the charms of Helvellyn, but this was a great route, even if some might prefer to enjoy the summit of Sheffield Pike another way.

Ahh, my former, regular stomping-ground before I discovered the Hewitts and got drawn to places new. If I had a £1 for every time I've been up Helvellyn ...

It must have seemed like a thriving metropolis up there compared to some of the remote Welsh peaks you've been to recently! Fortunately, not all the Lakeland peaks are that busy - many of them are, but not all. Still, its a beautiful corner of England that is a joy to explore. Enjoy.

And if you cast your gaze north-eastwards, spare a thought for those of us working through the North Pennines Hewitts. Bogs, bogs and more bogs

Is it really all that bad in the North Pennines then, Red Peak? I'd imagined so, and was pretty set against tackling those 'peaks', but since then I've seen a couple of reports (from Melmerby Fell and Cross Fell) that make it look quite enticing, and rather more pleasant going than expected... Might be softening already!