Homeless and up Stac Pollaidh

Homeless and up Stac Pollaidh

After being so well fed at Mrs Macleod's B&B near Achiltibuie for the last three nights we were out the door! (we went for one night and stayed for two more). It was Saturday morning now, new guests were due so we bid farewell to our kind hosts and headed off uncertain of where would end up that night. But first we had a wonderful wee mountain to explore..... This is us ascending the tourist path approaching the saddle from the north slope of Stac Pollaidh. This takes walkers around a well prepared route on the east side avoiding too much continued erosion on the south. Crags on the east summits from the Saddle. You can just see the carpark far below.... We were hoping to reach the west summit that we knew would involve some fun and scrambling through the rocky ridges, cracks, gullies, ledges and pillars...(Many visitors only come to the saddle area which is wonderful in itself.) We have already tried two ot three routes a bit like this, but decided to drop down again and look a bit further. However on this one, instead of scrambling all the way up we swung left and found a fine wee path leading to a southwards looking ledge. 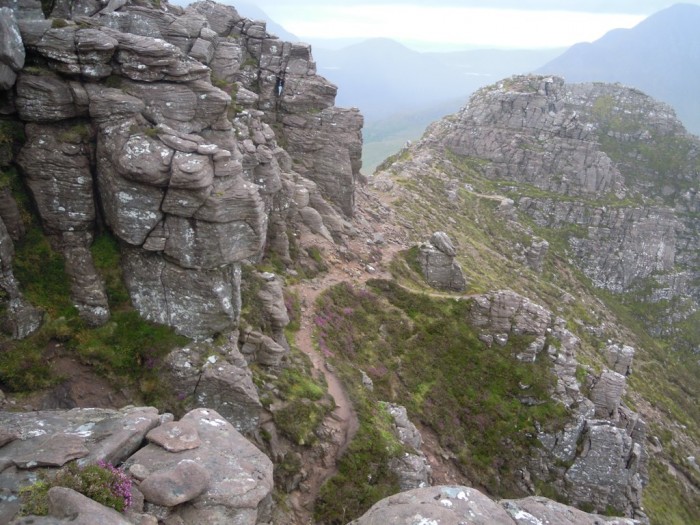 Looking back towards the saddle area from what we hoped was our access to the west summit. A typical gulley drop...one of many! After find a route through a maze including an awkward step or two, we think momentarily 'there's the summit'? A photo eastwards from this cairn with Cul Mor in the background behind the Stac Pollaidh ridge. Now on our second top and realising that the west summit is definitely over there. Yes there is a visible path but getting to it is not easy. The rock 'tower' in the centre had us stopped in tracks just two minutes ago. Having realised already that there is a bit of a climbing manouvre from the sandy 1.0 metre wide bealach at the base of the tower we erred on the side of caution, retreated and sat on our second top looking over. Despite seeing the path to the summit we did briefly decide that Stac Pollaidh had defeated us. Before leaving though we dropped down below the tower and checked out what could only be described as a horrible slimey crack. No no to this and I clambered again to the sandy bealach. I stood, studied, stepped right and found the holds....yeha, but should I? I climbed up 2 or 3 feet and found a big hand hold for both my arms that I knew might allow me a leftwards step to safe ground. Before committing though I dropped and looked again to check solidity of my chosen holds, looked at Valerie and then we were off.... Knowing that getting up is just part of it, I memorised carefully my moves for the return. I was very comfortable now and assisted Valerie to safe scrambling again. Both of us on the top elated and happy. We made it a short stay though as retracing recent steps was very fresh in our memories. An amazing mountain summit... Back at our wee sandy bealach a very familiar spot for us now! Valerie happy to be back down and experiencing a shakey leg moment. It was great practice for Am Basteir in the Cuillin where we were 2 days later. Back on the Stac Pollaidh ridge retreat..... The gap in the rocks on our chosen access ledge from the saddle. Always good to have remembered key points along the way. Although to honest there are multiple routes from saddle to the west summit. 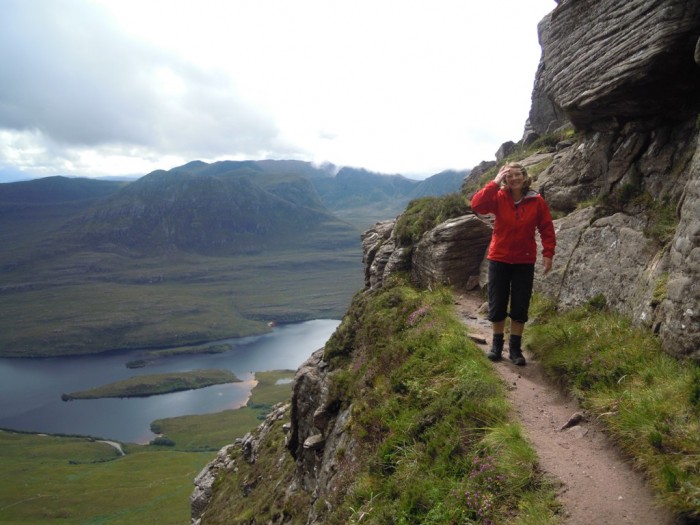 Not all the paths are rocky and slippy.... Back to the saddle. 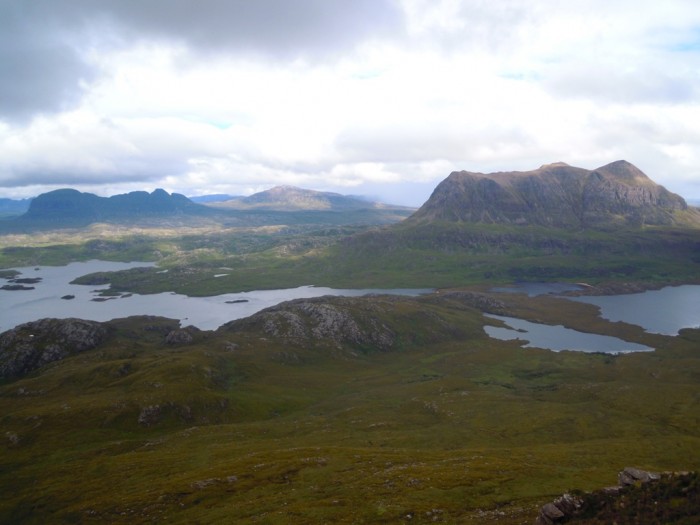 Stac Pollaidh did not let us down, but it deserves huge respect and care!

Hurry up Bod, I want to see you and Valerie at the top of that rocky beast!

I am back on task now, sorry Polly had to pop out for milk....hehehe

pollyh33 wrote:Hurry up Bod, I want to see you and Valerie at the top of that rocky beast!

It's a cracking half day out this hill

Stac Pollaidh - the best ever playground for adults

Wowsers! Definitely worth waiting for! Well done you two. Bet you're glad you had a dry clear day for this

Just goes to show that there are plenty grahams/corbetts which are more challenging and trickier to climb than many munros and this is one of them. I really must try to climb more of them

Brilliant Bod, love this wee hill, love the photos and can't wait to climb it. You maybe should have took your rope for this one.

Really enjoyed this one, Bod! Way to not let it get the best of you!!!

Great report Bod, well done - really looks like an enjoyable wander with some beautiful views to compliment the fun, excellent

I love your blow by blow account of the ascent, Bod! And plenty of excellent scrambling!

How do you manage to keep taking the pictures when I'd just be thinking about where next to hang on!

Great report Bod. I was willing you to find away as i was reading it.

Top drawer Bod. Well done to you and to Valerie too! Seriously rugged looking environment that!