Like most people, I'd written this weekend off as barely worth getting out of bed for - the weather looked atrocious! Luckily a late change in the forecast was as good as its word, with further south looking best. I thought it was time to have a go at one of a number of train/cycling/walking routes I had planned. My bike was knackered again, so I borrowed my wife's. Unfortunately for me it had a dropped bar at the front, so couldn't have looked more feminine unless it had been pink!

Plans were nearly ruined when the guy in the ticket office told me it was too late to book my bike onto the train, and he doubted there would be any room. Luckily he was wrong, and I was pedalling my girly bike away from Blair Atholl station just before 11am.

Perthshire Cycle.gpx Open full screen  NB: Walkhighlands is not responsible for the accuracy of gpx files in users posts
The first bit of the route took me through Glen Errochty, which I'd never visited before. Rather like a lot of other glens, but the cycling was very pleasant, and there was little traffic about. After 40 minutes or so, I got my first view of Beinn a Chuallaich. 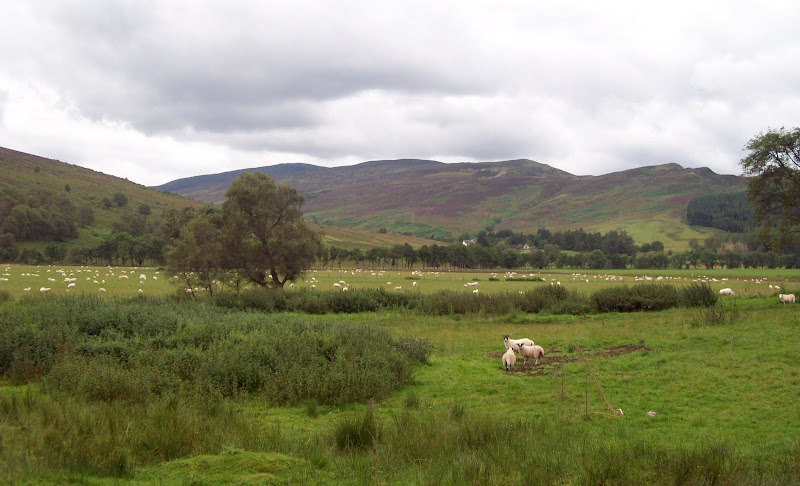 Note for Johnny Corbett - this is a girly bike... 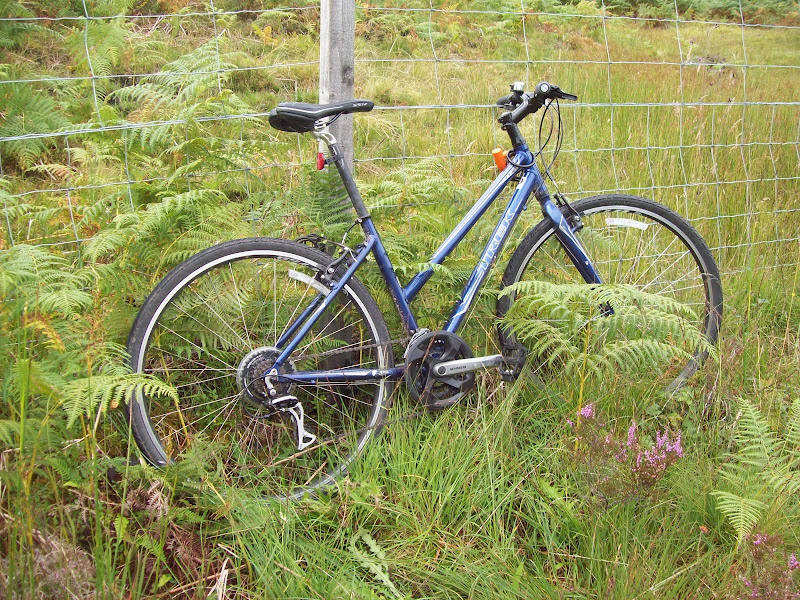 I decided to leave the road at the path shown crossing Meall na Moine, although there was little evidence of it on the ground. After locking the bike up, I climbed over the deer fence and crashed upwards and westwards through steep bracken (turned out there was a gate - found that on the way down!)

Chuallaich walk.gpx Open full screen  NB: Walkhighlands is not responsible for the accuracy of gpx files in users posts
The gradient eased and I crossed Coire Odhar, boggy in places and firm in others. I wasn't really doing the hill justice, just picking the shortest way to the summit. The gradient steepened again on the side of the south ridge, and just as I was thinking that this was a rather bog-standard hill (although with a rather good view of Schiehallion), I emerged on the ridge and the sun came out simultaneously. Suddenly there was a stunning view down Loch Rannoch to Rannoch Moor, with the Glencoe peaks identifiable on the other side. The contrast in conditions with the east was quite spectacular. 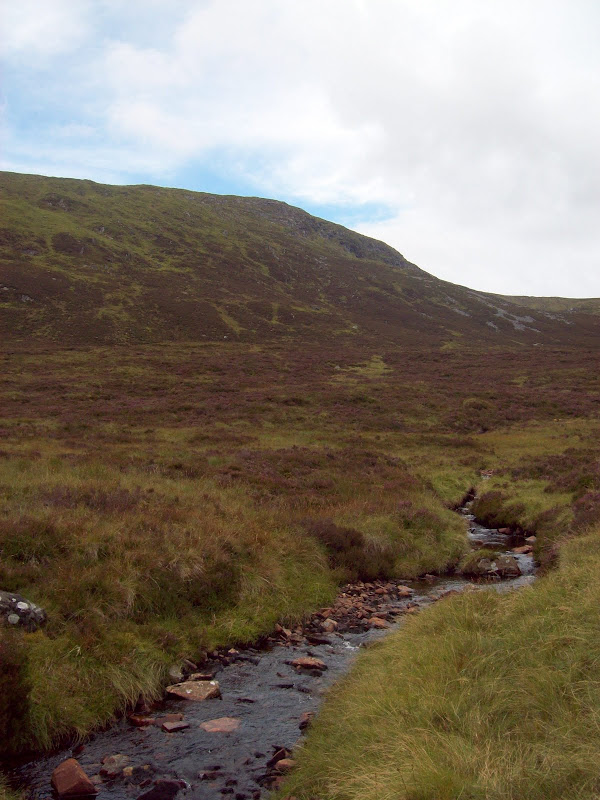 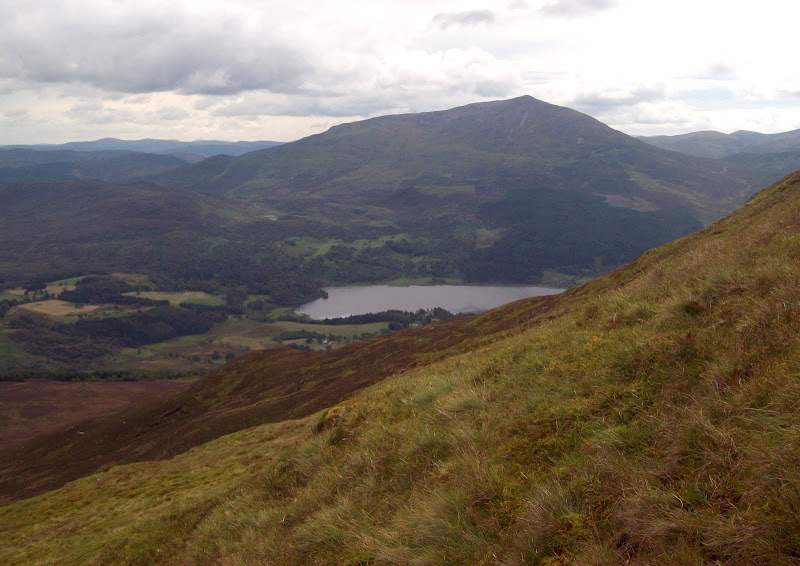 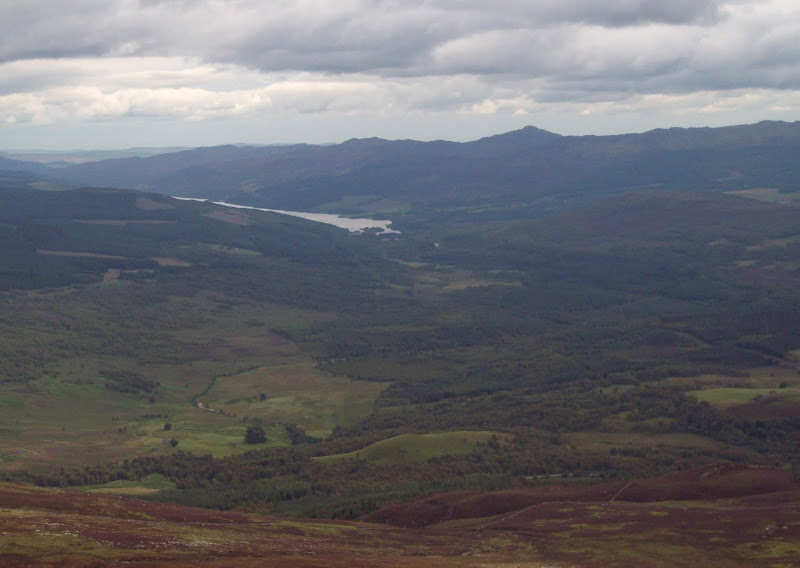 Loch Rannoch, Glen Lyon hills, and Glencoe in the distance: 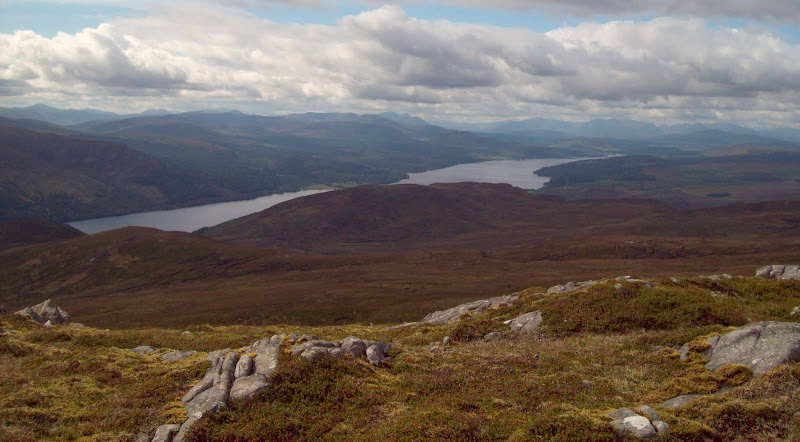 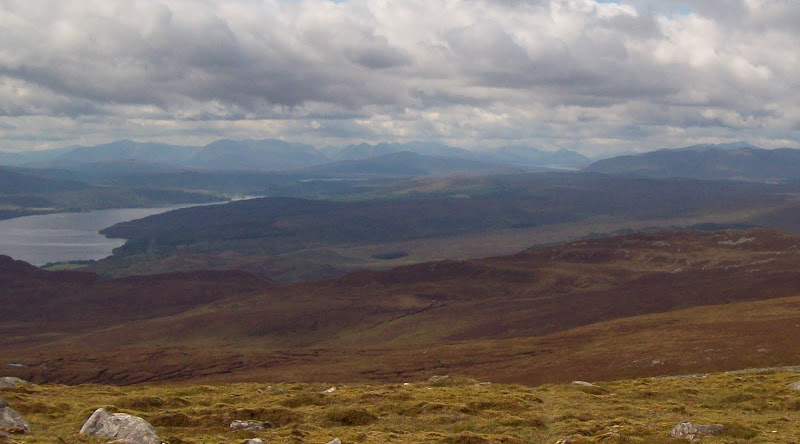 It was an easy stroll to the summit from here, and I passed a sheep which had been ripped apart and scattered over a 10 x 10m area. An eagle possibly?

There were a couple of ladies on the summit who had come up from Kinloch Rannoch, and were returning by the shores of Loch Errochty - seemed like a really good way to make a decent walk of this hill. I had a bit of a stroll around as the summit was quite large, and my first lunch. before heading down the south ridge again. I went further south than my ascent route and picked up the edge of the forest lower down, finding the gates I'd missed on the way up.

Across Meall nan Eun to the Gaick Pass: 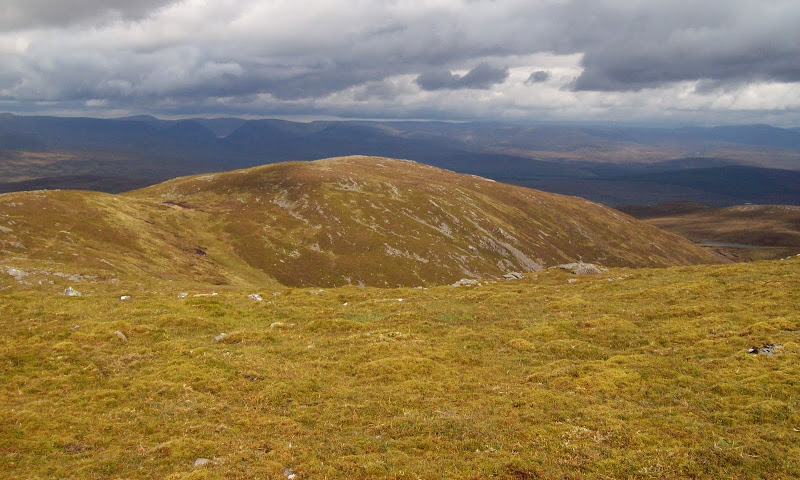 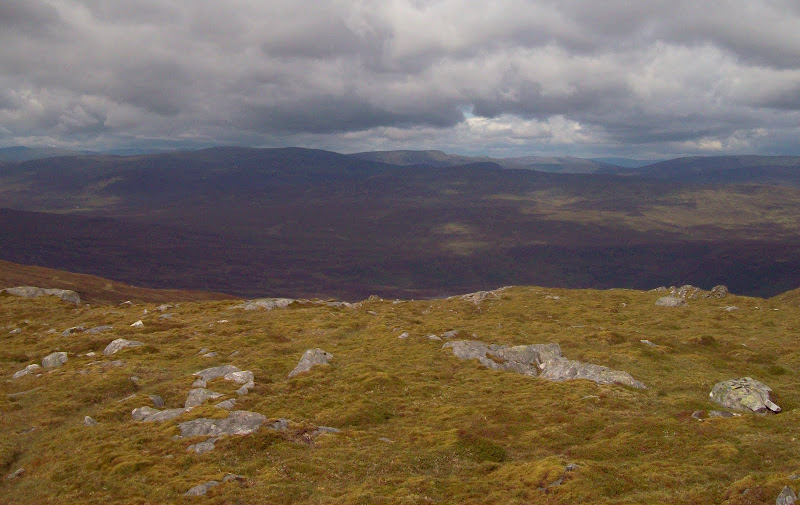 Looking down on the trig point from the top of the summit cairn: 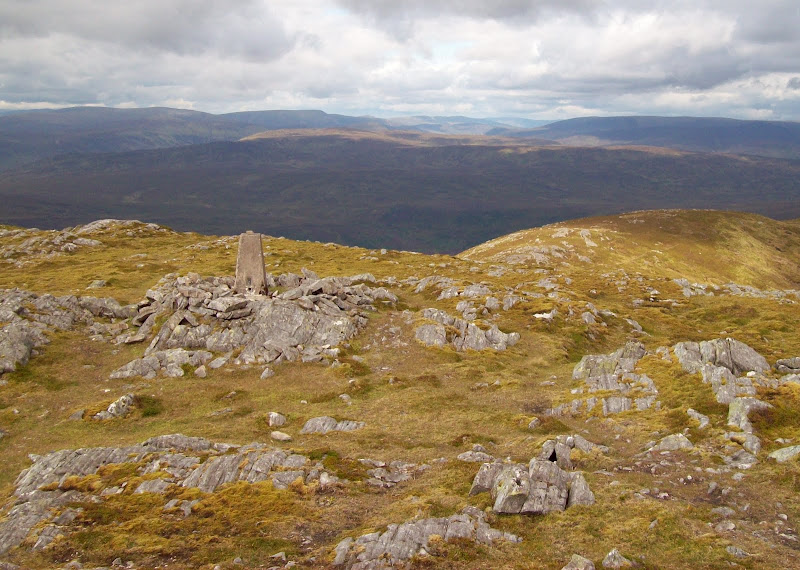 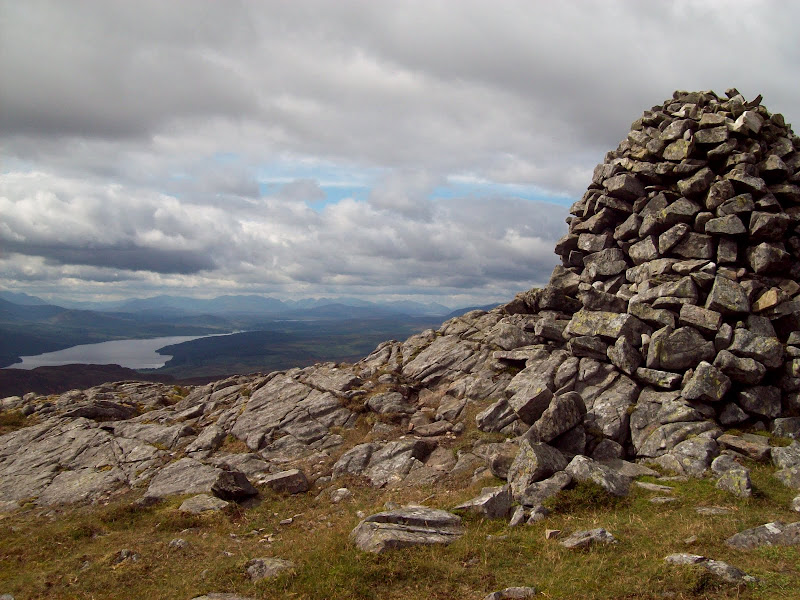 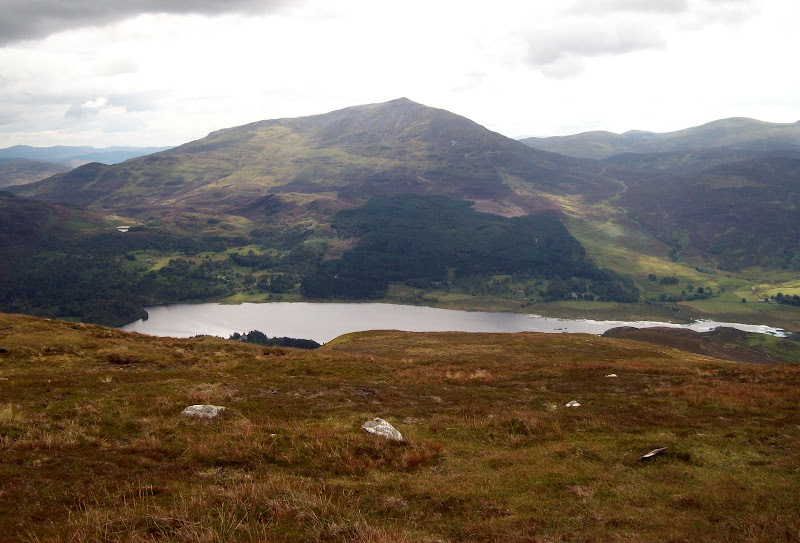 Back on the bike, and it was a speedy descent down to Dunalastair Water. I'd been looking forward to this bit of cycling, as it always seems really scenic round here. It was lovely. In fact the only thing that would have improved it would have been some autumnal colours. Should have waited a few weeks! I stopped briefly to have a look at some of the waterfalls on the River Tummel.

Rapids on the River Tummel: 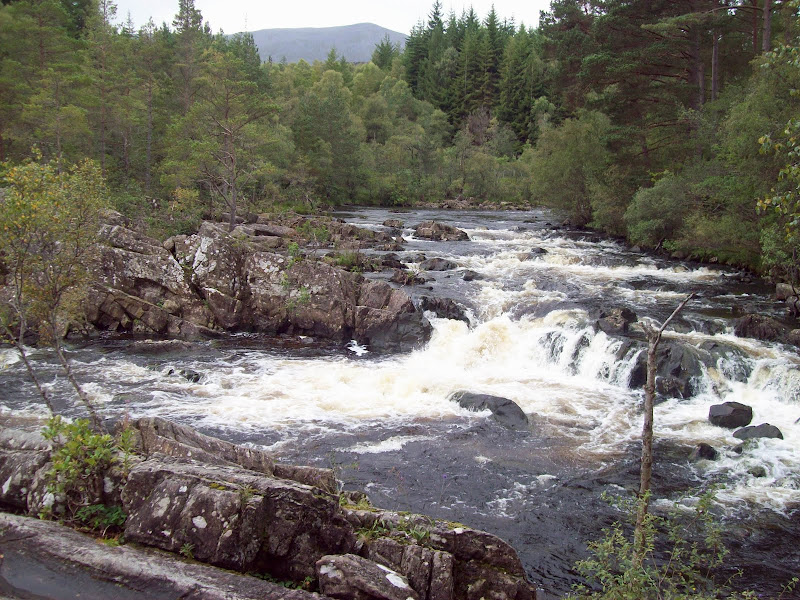 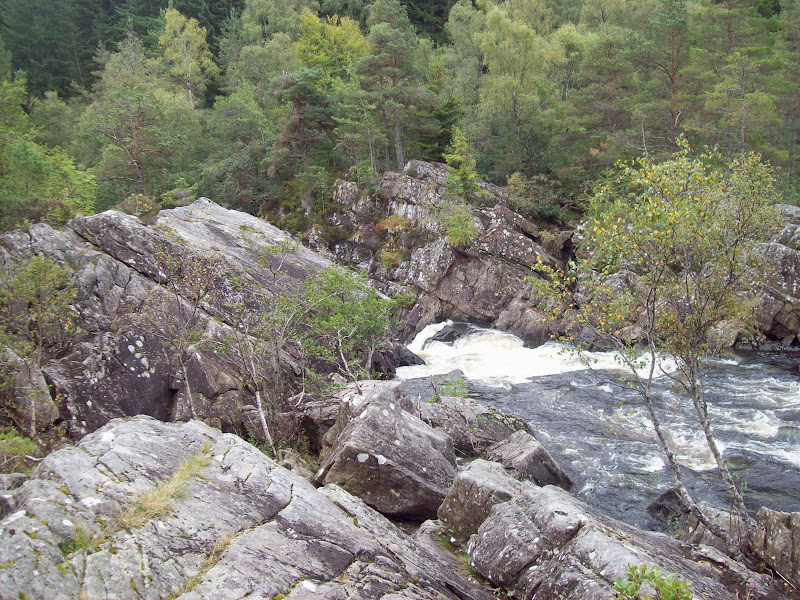 Sadly all good things come to an end, and I was soon grinding up the pass towards Aberfeldy. It was still scenic, but hard work. There were quite a few other cyclists around, including a couple of families. Way to put your childeren off cycling, hauling them up here!

Things were soon to get worse, as I turned off the tarmac and onto the gravel road leading to the mine on Meall Tairneachan. The surface was pretty good, but it climbed 200m in the first kilometer! I was off and pushing before long.

Looking back to Beinn a Chuallaich from the top of the steep bit: 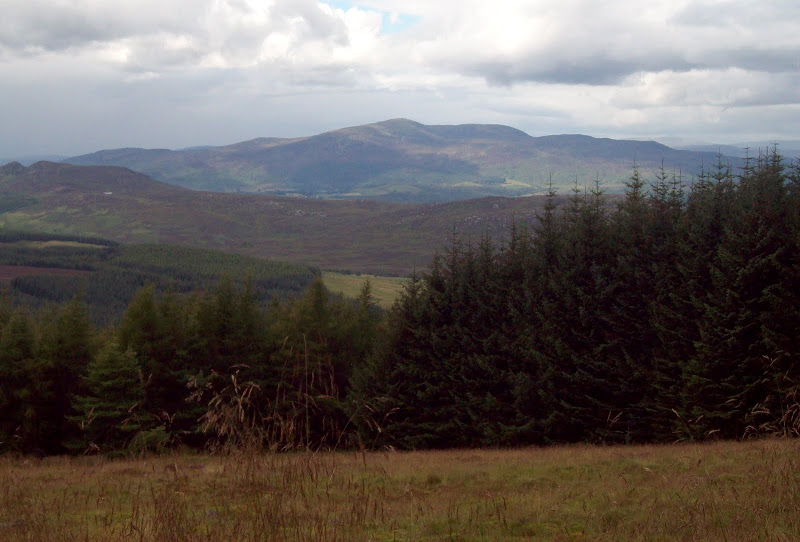 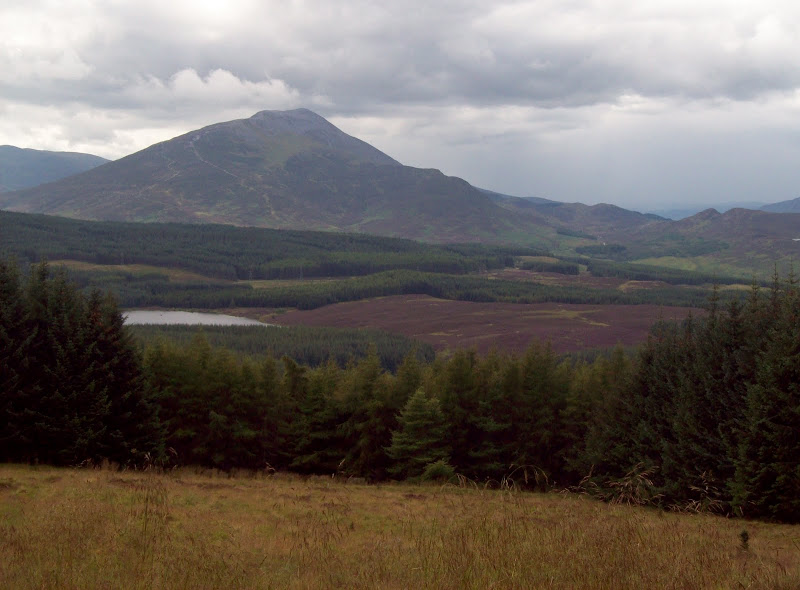 Tairneachan walk.gpx Open full screen  NB: Walkhighlands is not responsible for the accuracy of gpx files in users posts
Fortunately, the gradient eased just before leaving the forest, and I was able to get back on the bike. I could now see my summit ahead, and the track leading within 50m of it. I ditched the bike slightly earlier so there would be some walking at least, and headed for the 780m west summit. Steep initially, but soon giving a nice mini-traverse to the trig point, where I had another break. Looking down the south face, I realised my dad and I had come within 20 minutes of the top while climbing Farragon Hill some years back. I don't know why we didn't do it then, although I do remember the intervening ground being very rough.

The sunshine had switched sides now, with Ben Vrackie and Bheinn a Ghlo basking in it, while showers were covering the Lawers range. I got hit with the edge of a shower, but it wasn't very heavy. Taking the shortest route back to the mine track, I was back at the bike in 10 minutes. The mine is pretty well hidden from this side, as I didn't see anything of it, despite being only 0.5km away.

Sunny on Bheinn a Ghlo: 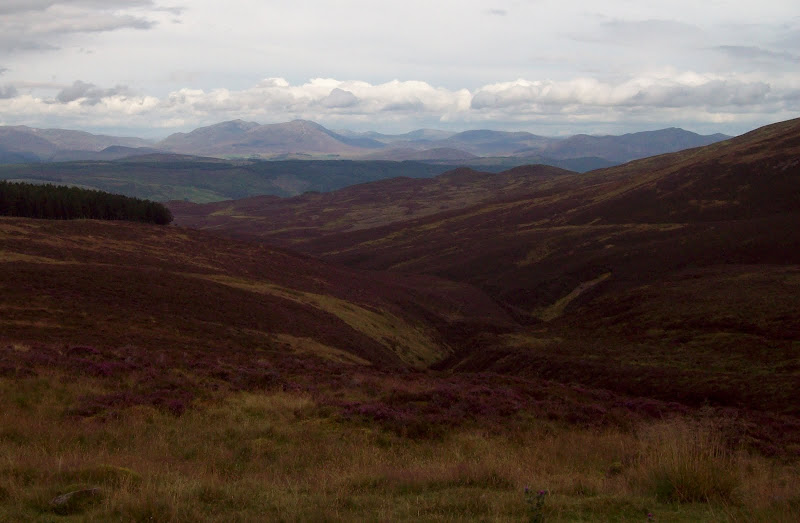 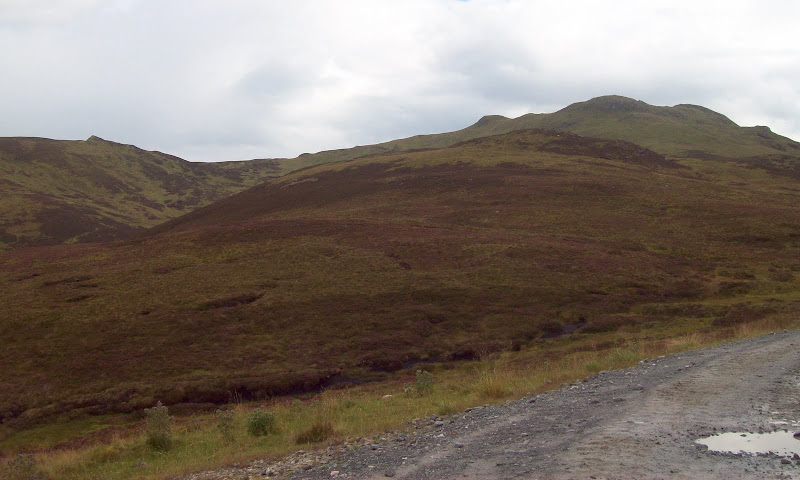 Near the high point of the track. The summit is the little bobbly bit to the right: 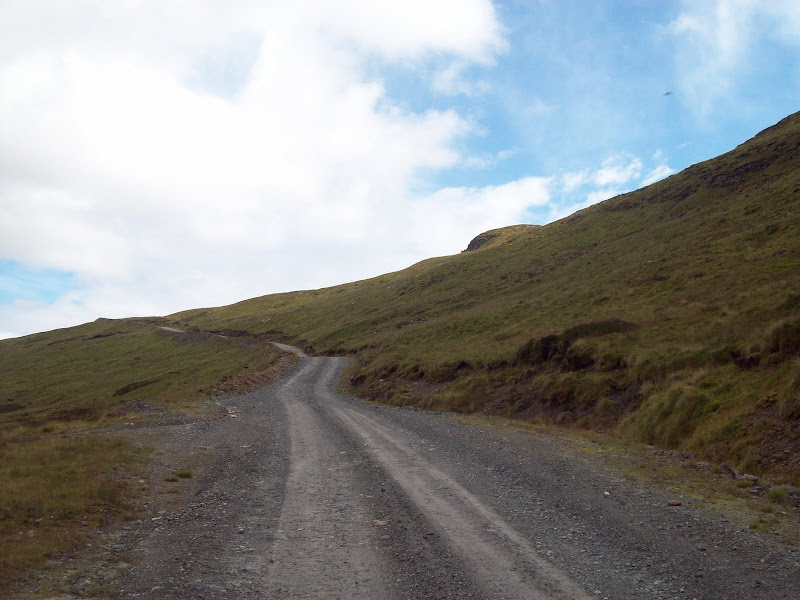 Dark over here, sunny over there: Bheinn a Ghlo: 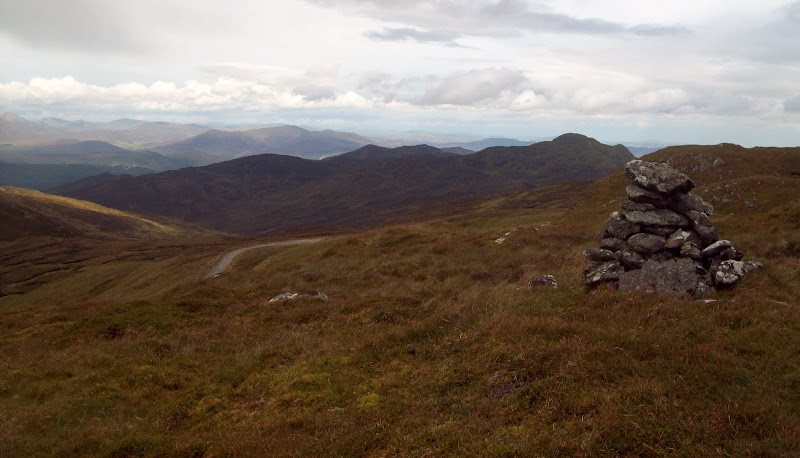 Schiehallion and rain coming in over Cairn Mairg: 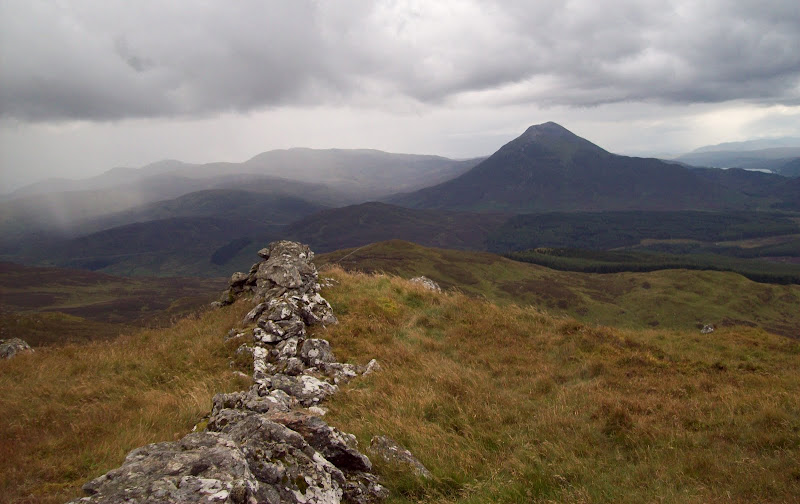 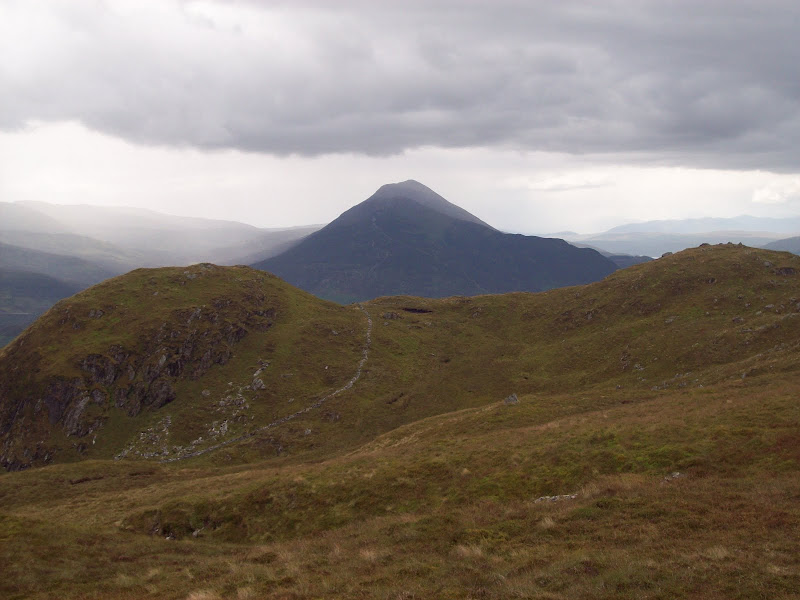 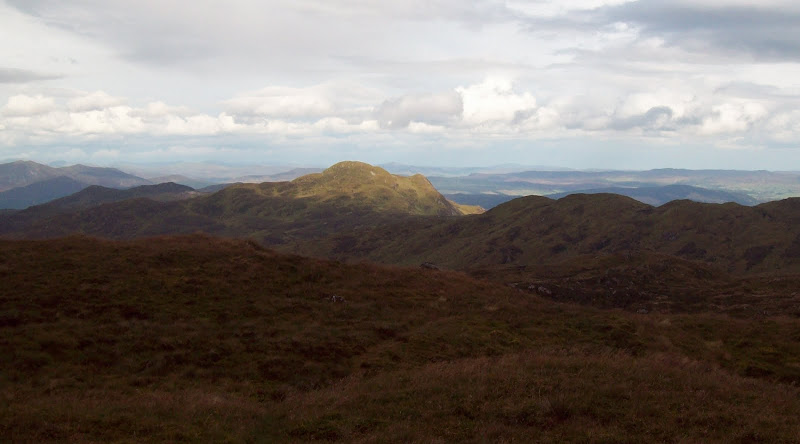 Although I had to take care on the descent as the tyres on Gill's bike were not designed for tracks, I was back at the Aberfeldy road within 12 minutes of starting! There was yet more downhill all the way to Loch Tummel, which was great. I must've descended 600m in about 20 minutes!

The cycle along the south side of Loch Tummel was picturesque, and a whole lot less hilly than the north side. However even the short ascents were beginning to grate, and I decided I'd be best off leaving out my third planned peak of the day (Blath Bhalg), and taking a leisurely ride back to Pitlochry to catch the 17:50 train home. A shame, as the evening was now lovely and sunny. 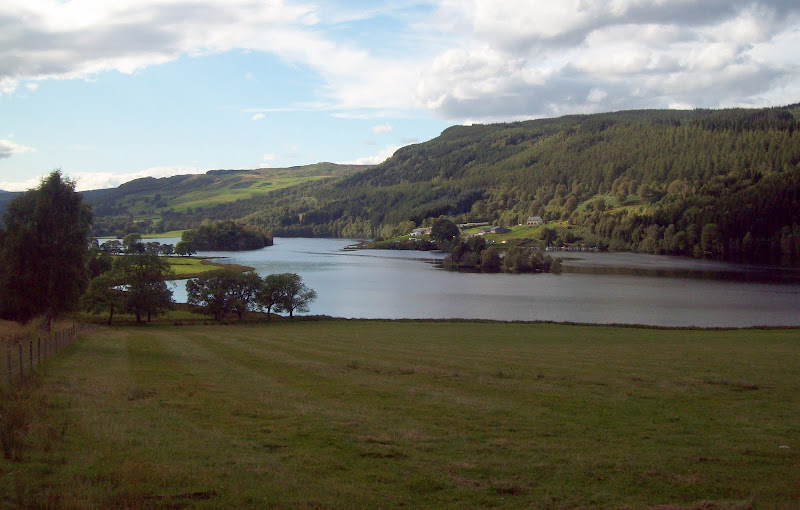 An odd view of the Queen's View: 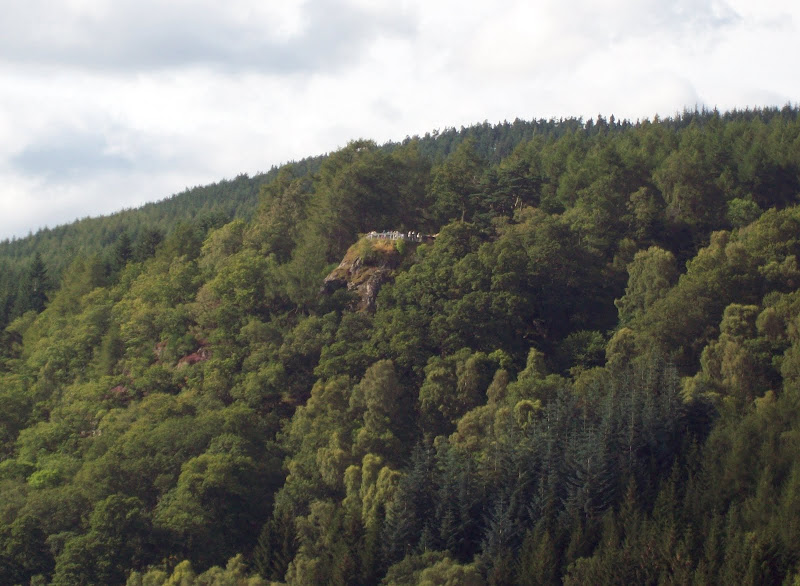 Beyond Loch Tummel, I was surprised how little I knew the area. There was a group doing white water kayaking on some rapids on the river that I'd never noticed before. Also I was surprised at the footbridge next to the A9 flyover. Having driven that road scores of times, I'd never even spotted it. 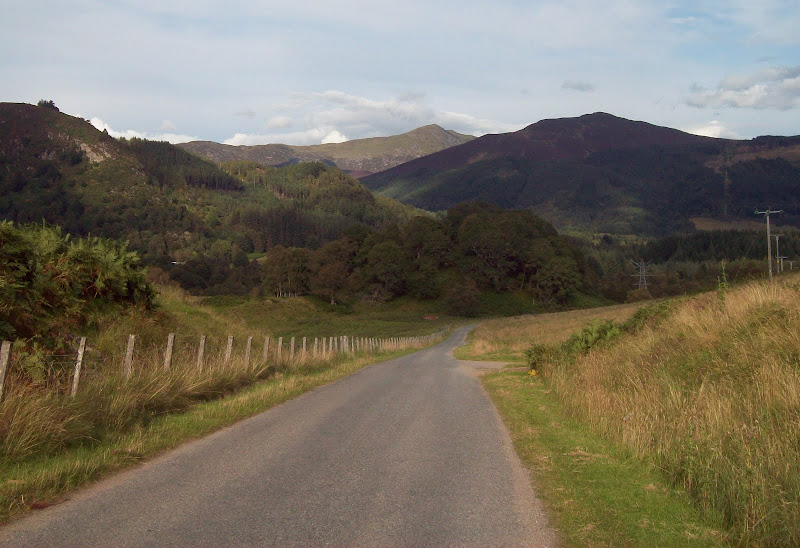 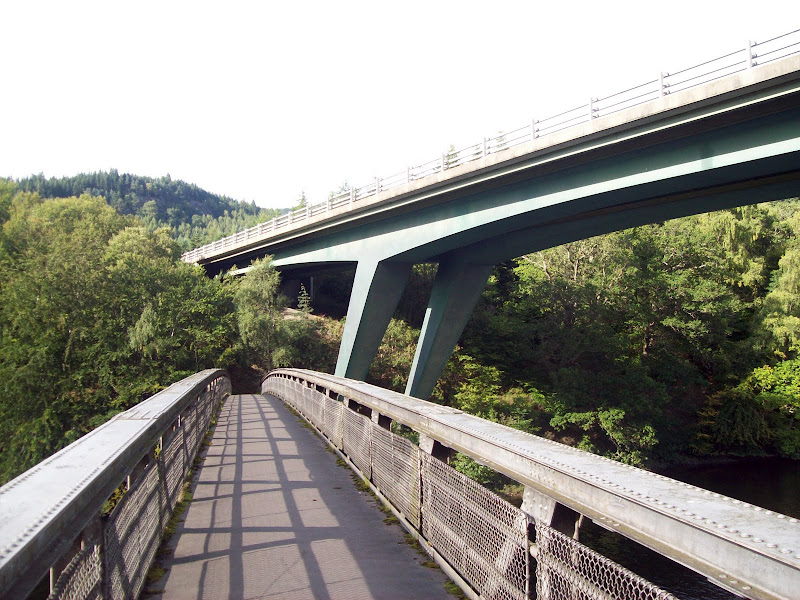 A nice entry into Pitlochry past Port-na Caig, and enough time left to get changed and put my smelly stuff at the bottom of my bag. Then a nice relaxing beer on the train home. 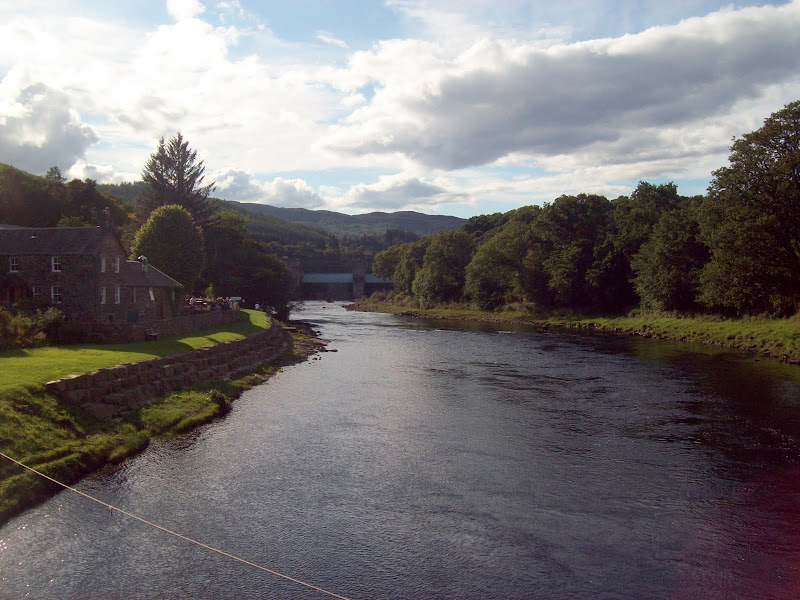 So, pity about Blath Bhalg, but all in all a bit of a bonus day out!

Great report mate, I'm envious! Looks like a cracking route in an area that I imagine very few folk (myself included) have ever had a chance to explore, despite the fact that we pass that area on every drive up the A9. I'll have to get out there sometime. All credit to you for having the guts to go out though - we wrote yesterday off due to the forecast.

Felt a bit like a smash and grab raid getting out yesterday given the forecasts.

A couple of nice hills there - fancy a return to Chuallaich sometime.

i used to camp around that area a lot when I was at Uni; sadly Loch Tummel has suffered similar issues like Loch Earn and Lomond

Love the picture of the rain drifting across.

More and more i'm starting to think i need to invest in a bike rack mor my car.

A really beautiful area. I have fond memories of The Queen's View as it was the jewel in the crown of my first visit to Scotland with my [Scottish] wife. Could really do with a ride around this area on my road bike.

Thats seats too high for a girly bike and is it purple like my girly bike?

I've decided to get myself a proper girly bike for my next trip.

Thought your last bike/walk was hard enough but this takes the biscuit.

Great way to get around though with some great results - must take some planning.

Johnny Corbett wrote:I've decided to get myself a proper girly bike for my next trip.
http://www.evanscycles.com/products/pashley/poppy-hybrid-bike-ec018734

Well done on overcoming your prejudices Monty. You know I'll be first to comment when you post up a report of you walking between these two hills