A friend phoned on Wednesday to say forecast was good for Thursday and would I like to do the Five Sisters of Kintail. It was the one day in the week my diary was clear so I said yes. But I wasn't sure if I was up to it so it's probably a good thing I didn't have too long to think about it or I might have chickened out. (In 1987 I was diagnosed with ME and spent the next 15 years severely to moderately debilitated and the idea of tackling a walk like that then was on about the same level as flying to the moon.)

We parked in Glen Shiel at the same spot we left the car when we did the Brothers' ridge (but I have to say that didn't quite prepare us for their sharper angled sisters!). We walked up the steep zigzag path (which was so waterlogged in places it felt more like walking up a burn) to Bealach an Lapan. 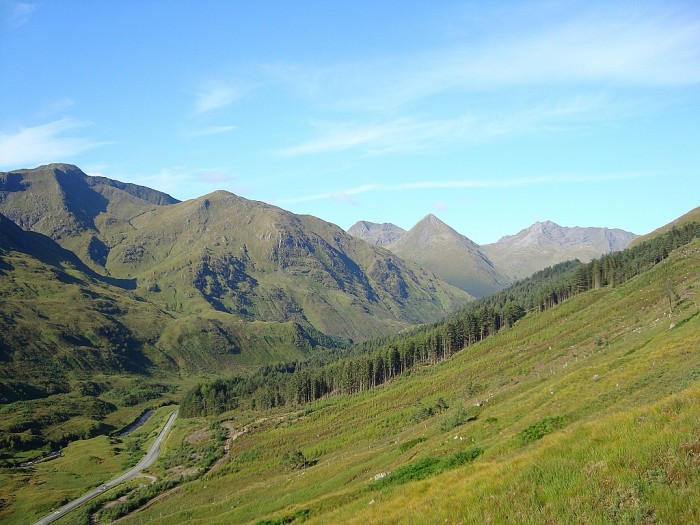 There was our first hill - Sgurr nan Spainteach - the Peak of the Spaniards in recognition of a battle they fought a long time ago in the glen down below. 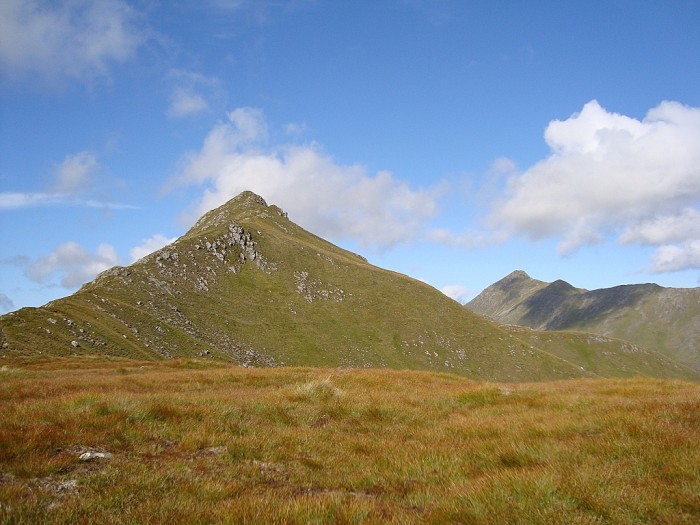 As we climbed we had superb views of Sgurr na Sgine and The Saddle at the other side of the glen. 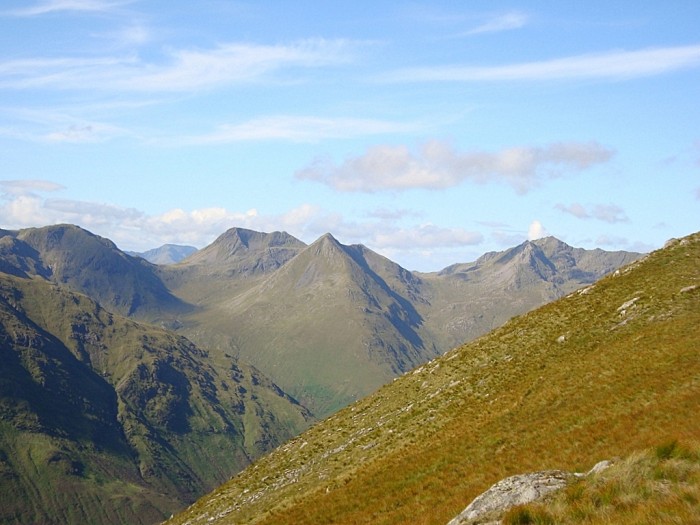 So far the path up the ridge was easy going. 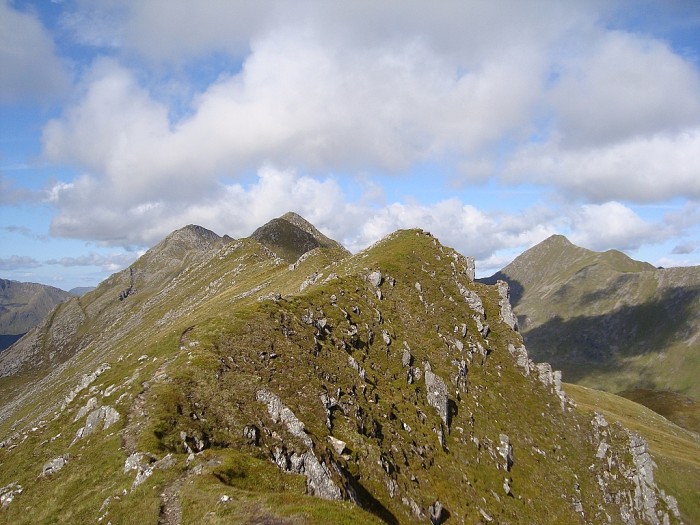 But what lay ahead looking worryingly rocky and steep! 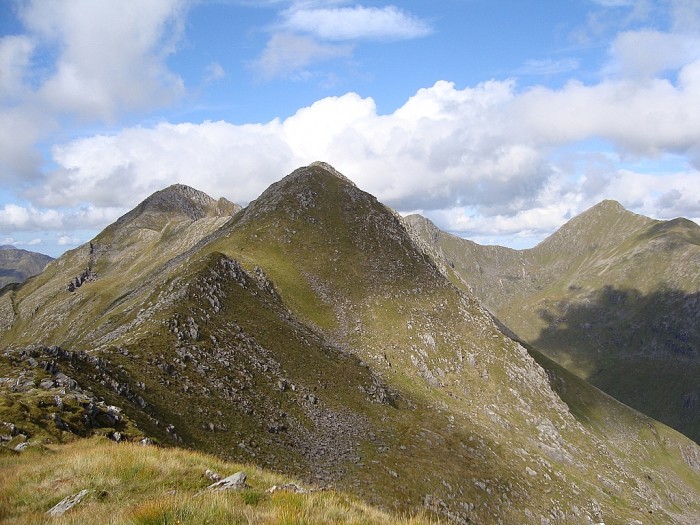 Looking back the way we came from top of Sgurr nan Spainteach. About this time we were overtaken by two guys up from Carlisle to do some hills. We stood and chatted for a while, as you do, and off they we went while we stopped for a bite to eat as it felt a long time since breakfast. 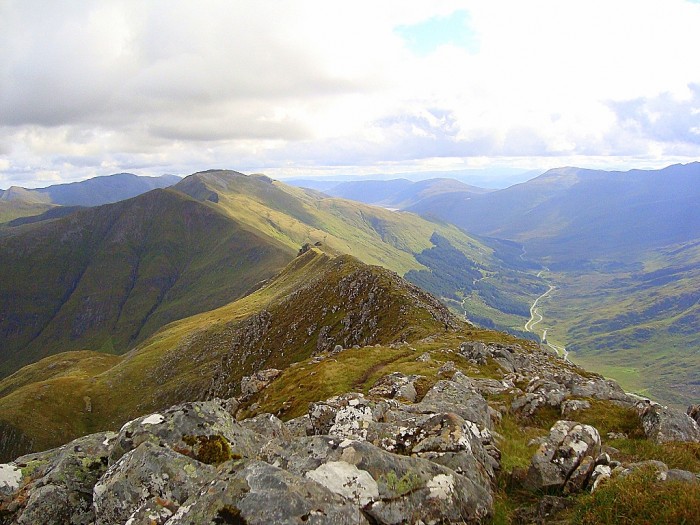 The guides all mentioned a short down scramble on the ridge which had me wondering how I'd do but it didn't involve any more than a bit of bum shuffling and a leg flip round an awkward corner of rock - so far so good! 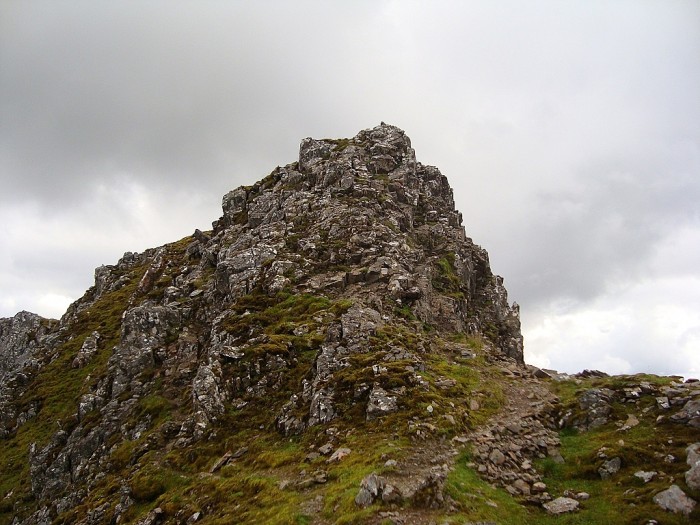 Reaching the top of the first Munro, Sgurr na Ciste Duibhe, opens up a view of Loch Duich which is visible for the rest of the walk. 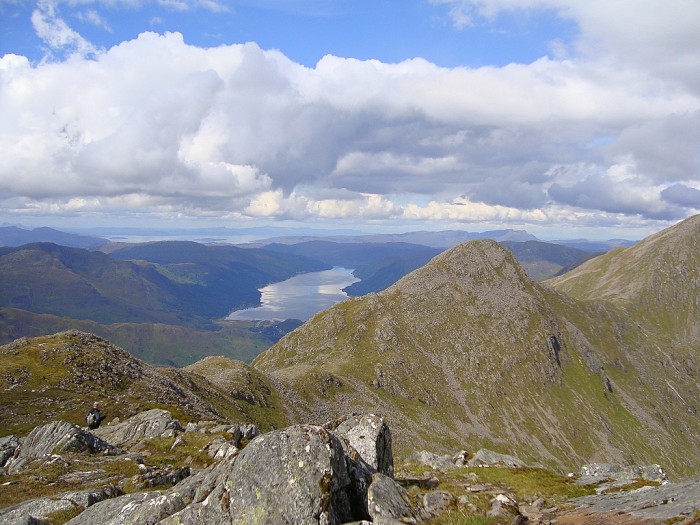 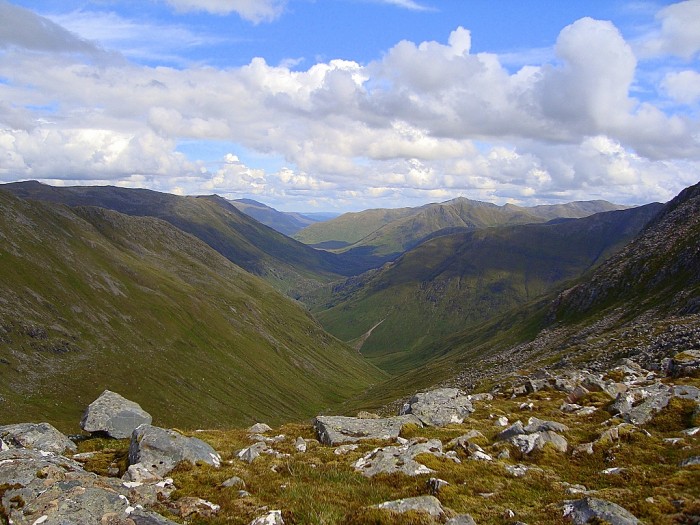 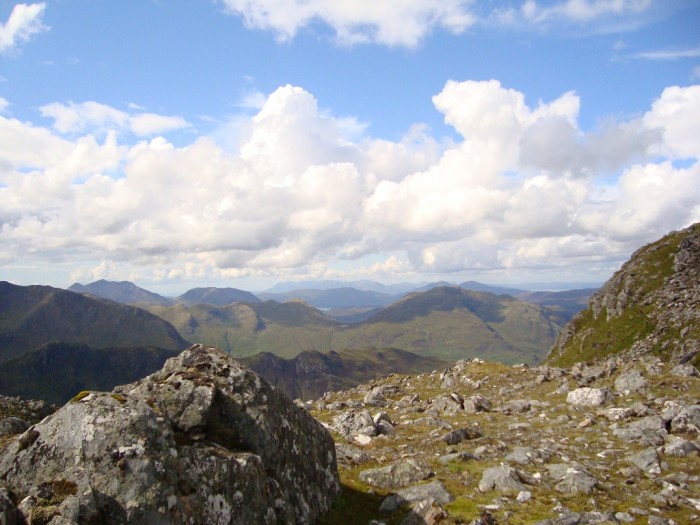 Loch Duich from top of Sgurr na Carnach, second Munro of the day. 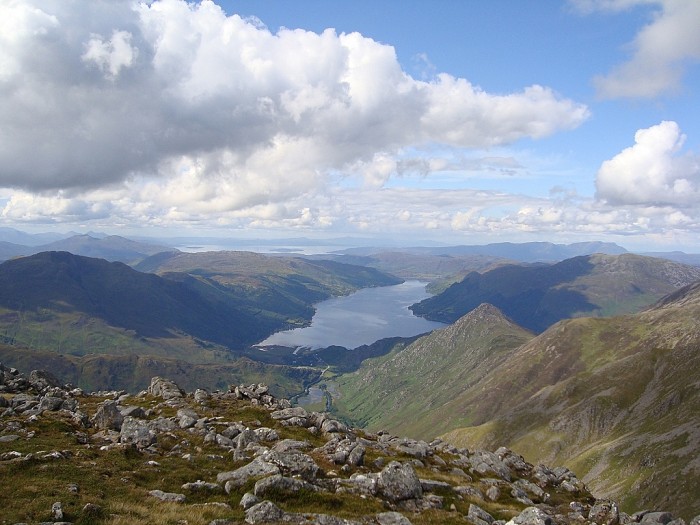 Had there been an easy way down from the ridge at this point I might have been tempted to take it as I wasn't feeling the best - slightly shaky and runny nosed - and couldn't get any speed up. Think I was brewing a cold. But the best option was to carry on and climb Sgurr Fhuaran which was looking intimidatingly steep

. This involved another short down scramble which I found a bit more awkward than the first (or maybe it was the way I was feeling) then more hard slog on a steep path that weaved its way up through the rocks. The summit appeared sooner than I expected and I felt quite exhilerated to have made it to the top of the third Munro, Sgurr Fhuaran, at 1067m the highest point on the ridge! 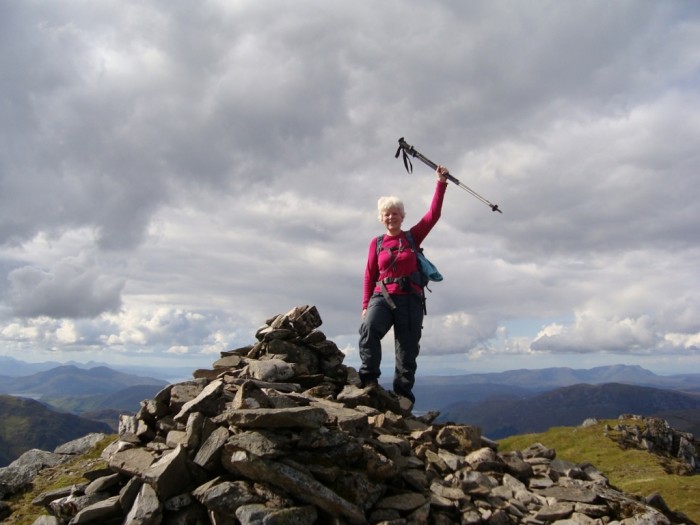 Looking back the way we came and to the south. 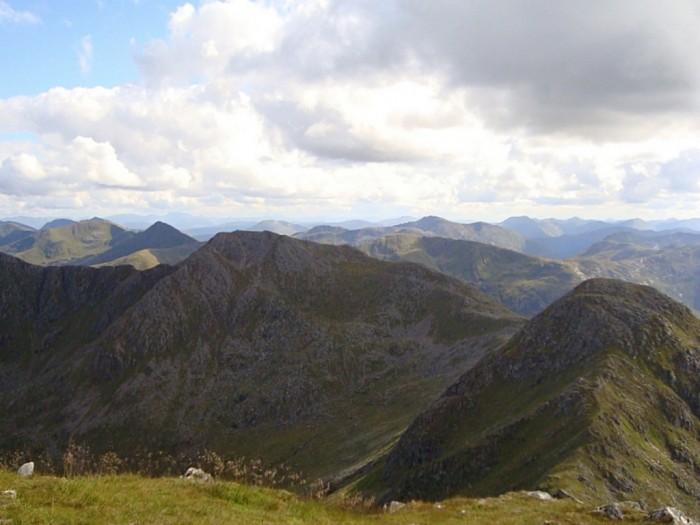 I had decided in my mind the most sensible way down so we wouldn't end up too far from the car was down Sgurr Fhuaran's west ridge. I wondered how my dodgy right knee would cope with such an unrelenting downhill pounding but I'd been practising a wee tip I got from monty via rockhopper on this site which is to shake the painful knee between steps. So there I was doing a strange version of the Hokey Cokey whenever I got the slightest twinge and whenever the rocky terrain allowed

and I was feeling nervously up for the long descent. But my walking companion felt the best route down was the one WH recommends - to continue along the ridge and down to Loch Duich at Ault a Chruinn.

This pic is not the west ridge (it's heading east) but after all the rockiness of the main ridge the greenness of it looked rather attractive. 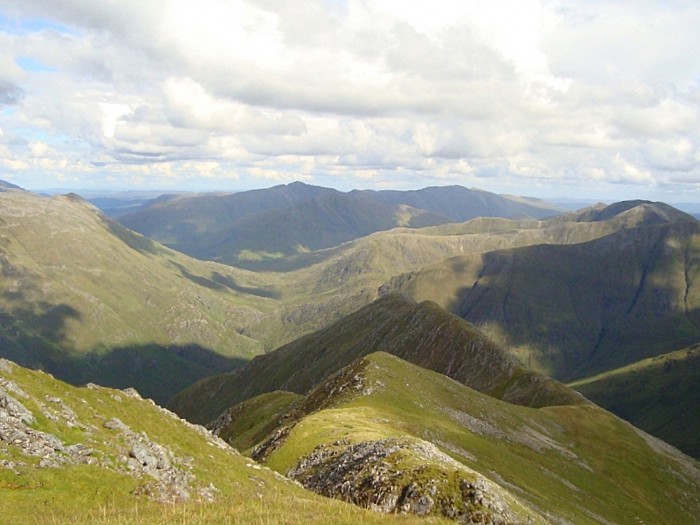 Looking west to the Cuillin ridge and the sea. I always think there's something magical about seeing the sea from mountain tops. 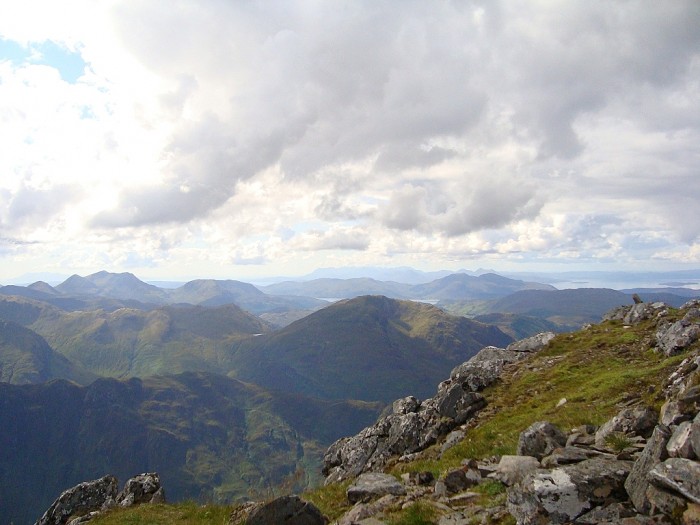 I have to admit he was right.

It was a better route and I would probably have wished I'd finished the ridge if we'd gone off early. In some ways the second half was the most spectacular part of the walk. Looking north. Is that dark dorsal fin on the right Bidean a'Choire Sheasgaiche? A head for heights useful here as path goes near a gully with huge vertical drop. I took a pic looking down it but it flattens it and doesn't do it justice at all so not putting it on. 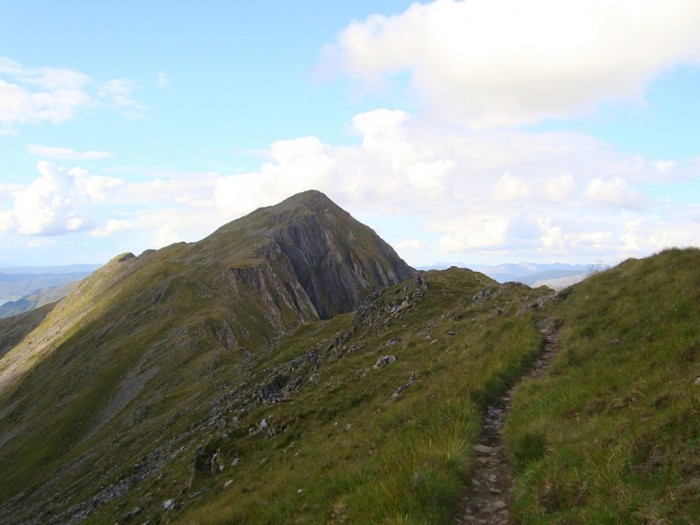 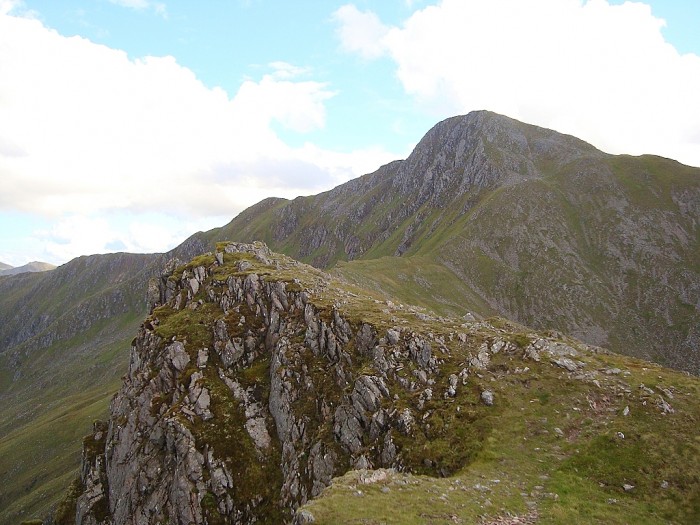 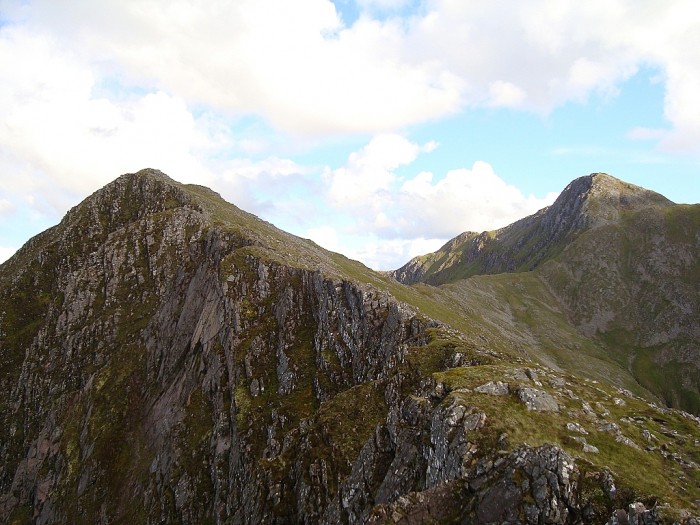 Beinn Bhuidhe, which the path mercifully went round. 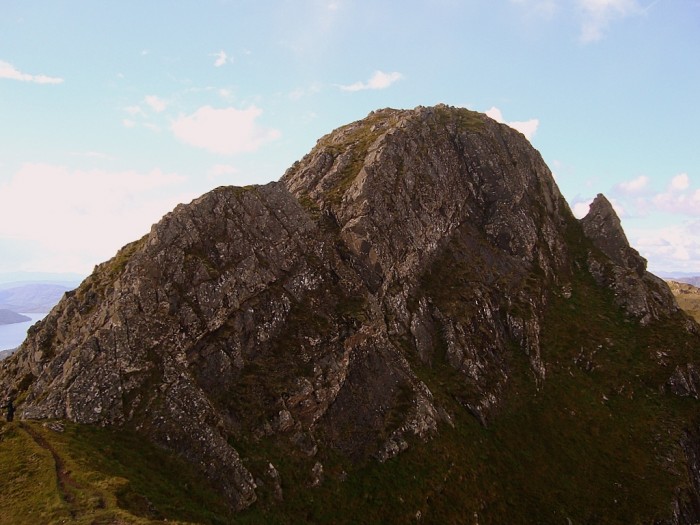 I hadn't realised how much the light changed over the day until I saw the photos. 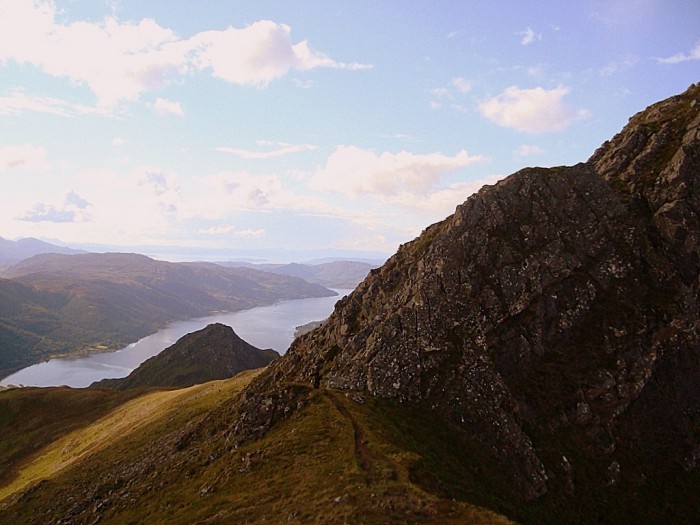 From Beinn Bhuidhe the path leads down to the col and over the Allt a Chruinn and a good path follows its right bank right down to Loch Duich. As we dropped into the col we got a serious midge attack and I got out my emergency supply of Skin so Soft, which doesn't seem to put them off having a go but it does make them die. 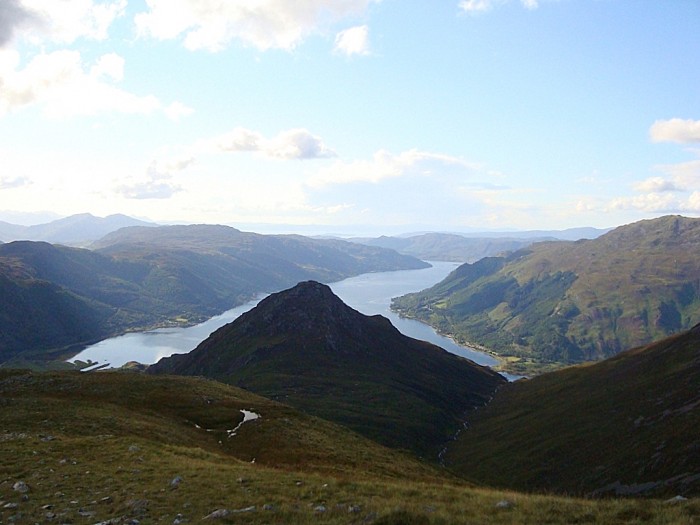 As the gradient steepened my knee started to protest strongly so it was back to the Hokey Cokey for a while, along with accompanying yelps when "shaking it all about" didn't do the job.

It was okay as there wasn't a soul about. At the point when I suddenly saw the causeway below it was raining in bright sunshine which was stunning and gave an effect the photo doesn't fully capture. 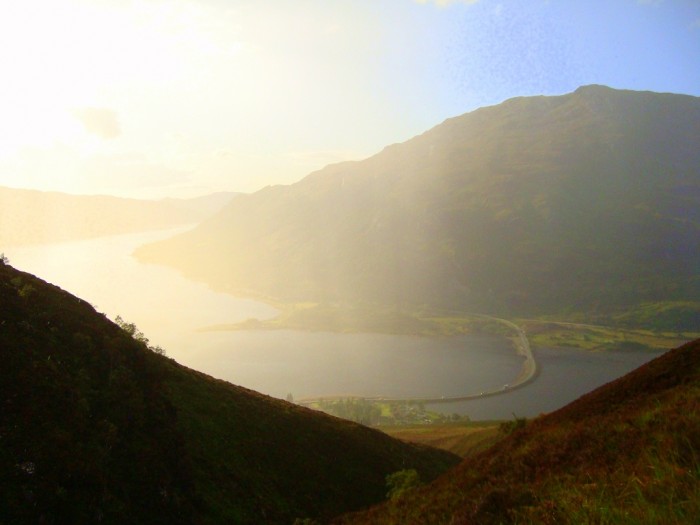 At 7.00 pm the sun low over Loch Duich. It wasn't as dark as this makes it look - looking this way because I took it into the sun. 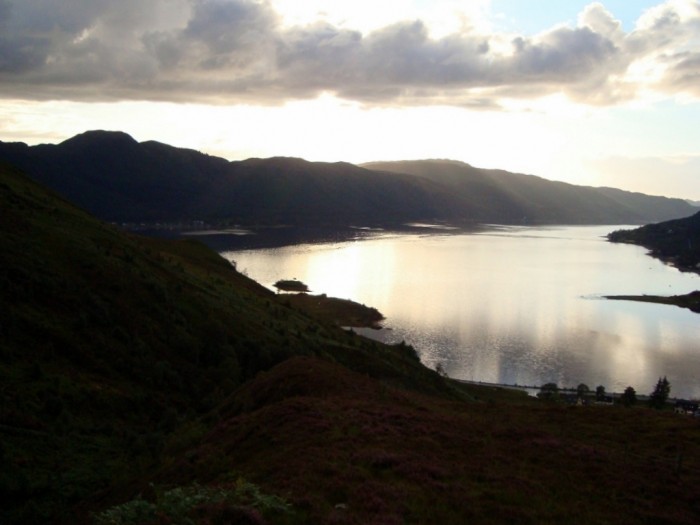 My mate arrived at the main road just in time to see the 6.45 bus passing but not in time to catch it (my fault for being slow). He then tried unsuccessfully to thumb a lift for 45 minutes while enduring sustained midge attack.

Five minutes after I got there a car stopped with the two guys we had met earlier on the ridge. They were heading the other way but seeing our plight insisted on taking us the 13km back to our car. We didn't get their names but thanks guys!

You saved us a very long walk!

Damn! The weather looked really good there! I was almost tempted to take last thursday off work to get out somewhere, but I wasn't able to in the end. Looks like a fine day for doing the 5 sisters

It was a fab day malky. I was meant to be doing a hill on Saturday but we pulled the plug because of poor MWIS and then it wasn't a bad day at all.

Thanks GLW. Hope your ankle is currently behaving!

Jees Dogplofdder, cracking report and look at the weather. Great set of photos on a great set of hills. Superb.

Hey, Dogplodder! Sooooo envious of you being able to do this walk! Great report and fabulous photos!

Blooming amazing report! Fantastic detail and stunning photos. No wonder you look so chuffed at the summits, those were awesome hills you climbed- loved it

Great report & great weather you had.

I have not done these hills yet so your detailed report will help.

I too experianced the road side midge attack last year when i did the munro's on the other side.

Thanks monty, polly, jonny and kevsbald. And, gizmogirl, the icing on the cake would have been to have had you along too!

Enjoyed reading your report - hope you're feeling better. Had me chuckling away when I got to the bit on the hokey cokey - I've got a strange pictire in my head of you shaking your knees on the hills

rockhopper wrote:Enjoyed reading your report - hope you're feeling better. Had me chuckling away when I got to the bit on the hokey cokey - I've got a strange pictire in my head of you shaking your knees on the hills

rockhopper wrote:I tend to have a simialr problem with my knees especially on the descents which I often find harder than ascents. A while back monty suggested "shaking" my knees as I walked and I find this helps. As I walk along, when my right leg is up and left leg on the ground, I shake the right leg a few times around the knee area which seems to loosen up the knee cap. Then do the same for the left and keep alternating for a bit. Sounds odd but it does seem to work for me and helps the soreness which starts just under the knee cap.

Seriously though, I think it does help as it reduces the tension in the joint. It didn't stop the pain entirely and I was still yelping coming down the last section... but with 63 year old knees what can you expect!

Great report and fantastic photos! Thanks for sharing your walk.

Great report and stunning photos. I have longed to do this walk since as a teenager I was deemed insufficiently fit to tackle this one and was made to do a rather dull low level walk instead!