An Socach and Carn Bhac

An Socach and Carn Bhac

Munros included on this walk: An Socach (Braemar), Càrn Bhac


An Socach and Carn Bach are two Munros that I haven't walked in this area of the Cairngorms so I decided to link them both together on a long walk from Glen Clunie. Didn't get away from Edinburgh until 8.00 so it was nearly 10.00 before I reached the small car park on the A93 at Baddoch. There were three other cars parked beside the road with a group of four walkers just going through the gates as I pulled up. I had left the rain behind in Edinburgh and the weather looked quite promising even though it was a bit blustery; I had a quick coffee and a sandwich whilst lacing up my boots and was on the track soon after 10.00. The track up through the Glen was deserted and the shutters were closed on Baddoch Farm which gave a great feeling of peacefulness for the start of the walk. I didn't take long to reach the ford where the Allt Coir Fhearneasg crosses the track; from here you leave the land rover track and head up a narrow path alongside the burn aiming for the Cairn on Socach Mor. As I started to climb I caught site of the group of four walkers who had left ahead of me, they took a lower route closer to the burn while I headed for drier ground towards the ridge; mine was the better route and I reached the cairn on Socach Mor whilst the others were a long way behind. The path from the Cairn to the eastern summit of An Socach was very easy to pick out and I made good time to the top of the ridge where I stopped for a quick snack and drink. The route across the ridge is almost flat with only a slight bealach half way along before the final ascent to the summit which I reached at 12.00. It was blustery on the top and I put a wooly hat on for the first time in months as the northern wind was quite fresh.
From the summit I could clearly see my next destination across the glen, Carn Bhac. Leaving An Socach I initially headed north before turning NW; I checked out a few routes down through the loose scree before finding a way down which avoided the worst of the loose stuff. This route is very steep and has to be tackled with care but it is the most direct route to Carn Bhac and saves the longer walk towards Altanour Lodge which I had considered taking.
Half way down the slope, when I was out of the wind, I stopped on a rock for some food and a coffee; the sun came out and it was a perfect place to sit and enjoy the remoteness of this spot. From my vantage point high above the burn I chose my crossing point and picked out a few landmarks to take me up to Carn Bhac. After crossing the burn and heading up towards the ridge you have to drop back down to cross the Allt nan Clach Geala lucky my river crossing skills didn't desert me as they did on my last trip out when I had an unexpected swim. Just above the burn I picked up on a land rover track which services all of the grouse butts which dot this area I followed this as it was easier than walking through the heather. As I headed towards Carn Bach I met up with a couple of walkers on their way down from the summit, they had biked in along Glen Ey and were on the way back to their bikes. It was just after 2.00 when I reached the summit of Carn Bhac, again it was a bit breezy so I decided to head for lower ground before stopping for a drink and some grub.
I didn't fancy the thought of having to climb back up to An Socach to return to Baddoch Burn and as there was no low crossing point to the east of An Socach my only option was to head for the bealach between Beinn lutharn Bheag and An Socach; it was a bit of a pathless slog but the only viable alternative to another big climb which by now I didn't fancy.
I followed a route which crossed over the Allt Beinn lutharn and the Allt Cac Dubh just where they meet; I was amazed to see the number of old tree stumps in this area, it made me think what it must have been like here years ago. There was no track to follow to the bealach so I followed the contours around climbing gradually as I went and soon reached the top. I kept fairly close to the side of An Socach as the walking was easier at this level than lower down. Just past where the Allt Boruiche comes down off the An Socach ridge I picked up a path which lead me down to the land rover track alongside the Baddoch Burn. It was a long walk back to the car park but downhill all the way which at the end of a long walk makes it a lot easier.
The amount of grouse, mountain hare and rabbits I saw on this walk was amazing but the size of the deer herd in the glen east of the Baddoch Burn was even more so, there must have been at least 150 deer grazing on the hill opposite. I took a photo on my phone, as my camera was damaged in the unplanned swim on my last walk, so it isn't that clear but if you look carefully you can just make them out. I got back to the car at 6.00, fairly tired by now but pleased with myself for completing what was a long walk and a great day out. 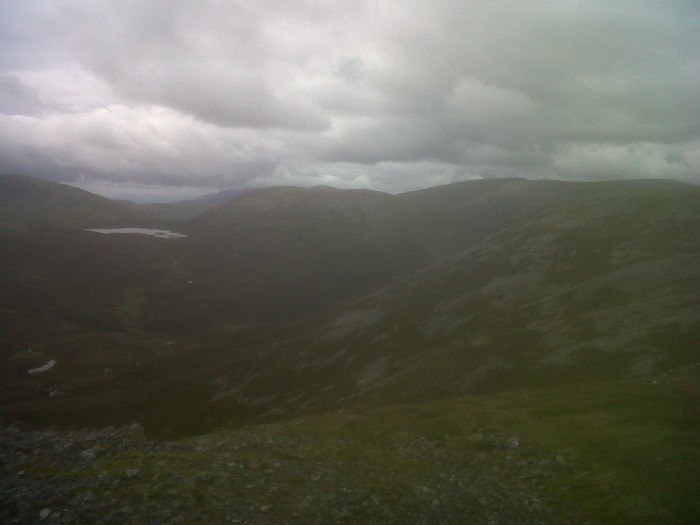 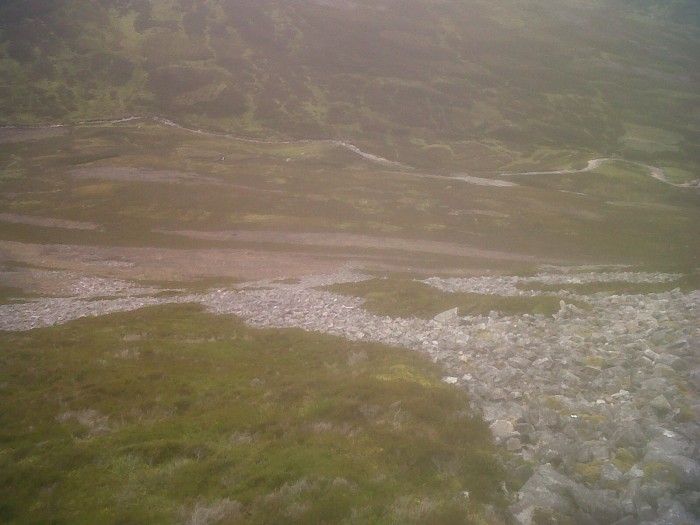 Looking down the scree towards Allt Beinn lutharn 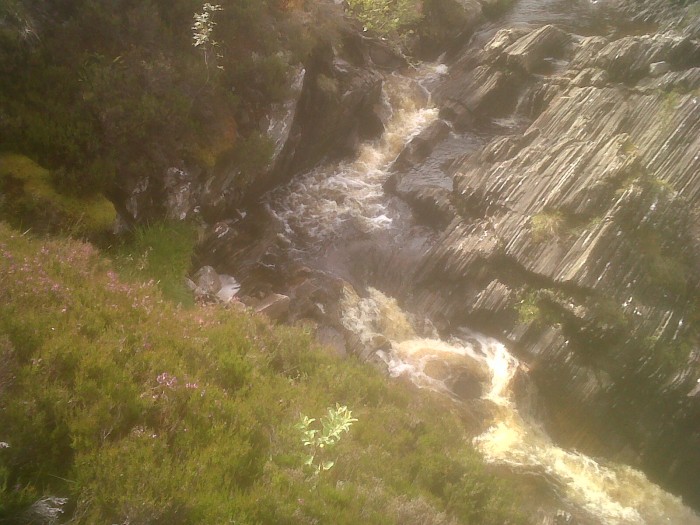 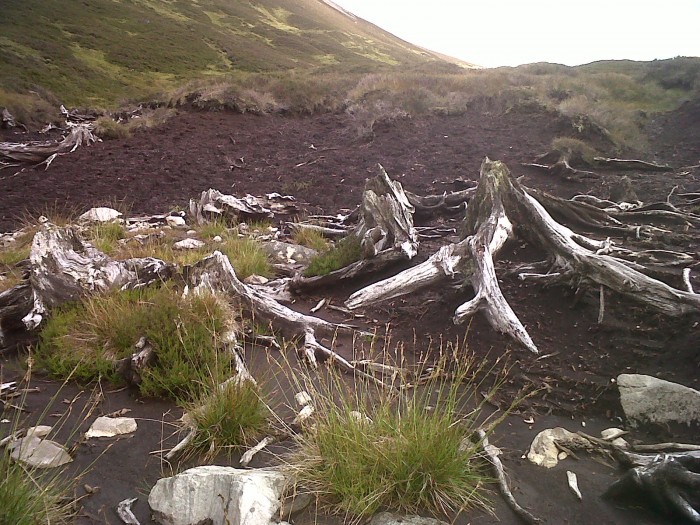 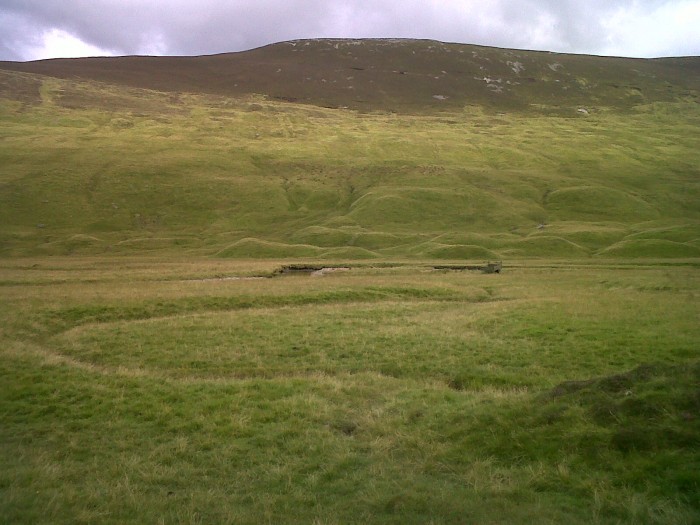 The tiny dots are deer (honest0

Re: An Socach and Carn Bhac

Hi Clive, Well I have to say that is an unusual route. I pretty much planned something similar on skis in the snow due to the expected boggy ground but in the end redone Bein Iuthern mor as well with these two and a good friend. Great route. And good photos. nice one

Re: An Socach and Carn Bhac

monty wrote:Hi Clive, Well I have to say that is an unusual route. I pretty much planned something similar on skis in the snow due to the expected boggy ground but in the end redone Bein Iuthern mor as well with these two and a good friend. Great route. And good photos. nice one

Thanks Monty; it was one of those routes that wasn't particularly well thought out but once you are on Carn Bhac there are very few "easy" routes back out without going back over An Socach or the almost equally tall ridge to the east. It's a great area though, really remote with few tracks to follow.
Clive