The Ballachulish Horseshoe - or when two misread a map

The Ballachulish Horseshoe - or when two misread a map


I honestly can say that I am crap in reading maps! What I can also say that I am usually very good guessing the right way (when walking alone) Not so much on a beautiful Saturday when I set off to walk the Ballachulish Horseshoe.

It started when I set off and managed to completely miss the fact I was at the wrong parking area in Ballachulish. But seing the hills in front of me, the logigal way was up.. So I made my way through someones back garden, climbed an impossible wonky fence and landed in a bog

, but in the distance I saw another hillwalker...so surely I was on the right way!

I walked up the hill and soon caught up with the other person I have spotted. Chatting about the hill, we were just going to climb, we decided to walk together. The walk was pretty easy and John (who had a book and map with him) assured me we were on the right way and should hit the path soon.

He was indeed right and with that I decided he would be the map reader for the day!
We reached the top of Sgorr Dhearg and after the usual summit photos, made our way towards Sgorr Dhonuill...well or so we thought!

What we actually did do is mistaken Sgorr Bhan for Sgorr Dhearg and when we reached the top of what we thought Sgorr Dhonuill was, we actually only climbed Sgorr Dhearg...

We both did wonder why the walk was done so quickly and I remember looking towards Sgorr Dhonuill, thinking to myself that I dont remember another largs hill in that area

but netherless we both were assured, that we had climbed the Horseshoe....

Following the discription in Johns book we made out way down. This is were the fun part started!
Following a barely there path and seeing the forest below, we thought we were heading to Gleann a Chaolais, instead we were heading down to Allt Guibhsachain...

I have been on many steep routes, but the grassy slope we walked down felt nearly vertical, and obviously we did not found any kind of path.

While we walked down we kind of realized that (somehow) we must be on the wrong path. But as neither of us wanted to admit being wrong, we headed down until we reached Allt Guibhsachain.

Reaching the burn (were we expected a path) lead us past,what looked like a place were sheep go to die...or were sheep fallen and rolled down the hill (trust me that hill was steep) We must have seen at least 8 dead sheep, but the path was no where in sight. Finally looking at the map (still thinking we must be close to Gleann a Chaolais) we could not understand, where the path was supposed to be and had two options...either walking back up the hill, or walk through the forest.

As neither of us could be bothered walking up the hill again, we crossed a fence and ended up in a heavily planed conifer forest. Within 10 min we were in the thick forest, liturally crawling and ducking through the undergroth, getting scratched, while walking down the steep plantation. The story of Hansel and Gretel came to my mind and when I asked John (who was getting rather frustrated by the time) which way he thought we should go and he just answered...'Just follow the light' I could not help myself and burst out laughing.

Didnt expect to hear that while walking down a hill!

After what felt like hours we finally made it out of the forest, looking like we just had survived a fight, with a group of mental cats!

So my fellow hillwalkers who cant read maps either...dont worry as crap map reading skills at least give you days you will never forget...
...and I think I should wait a bit longer to learn how to read a map Looking down to Ballachulish 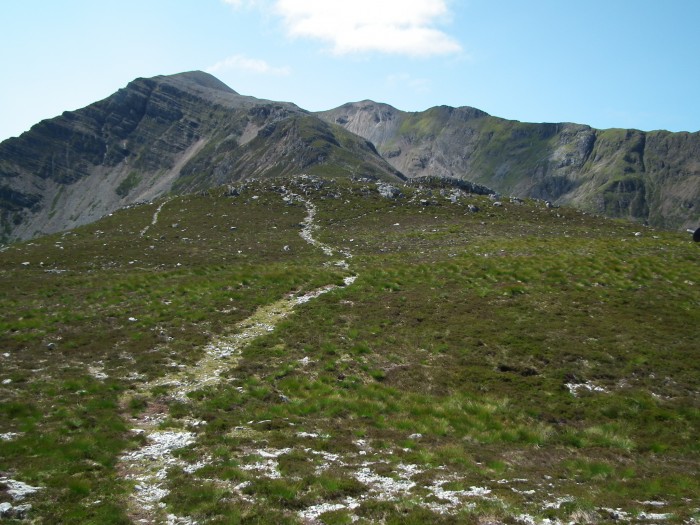 Can a day be more perfect? Heading towards the conifers (hill was getting less steep there)

haha , you remind me of me

you might not be able to read a map but you`re still able to enjoy yourself on the hills, without getting into too much trouble ! that first picture looking down onto ballachulish is beautiful

is that the pap of glencoe on the right of the pic ?

You are right, on the first picture you can see the Pap of Glencoe. Good to know that I am not the only one who cant read maps hehe

I could relate! Tried to do the walk solo, ha-ha, i missed the turn right after the second gate! Holy moly, I could see the horseshoe summit just slowly passed by me, and questioning where the hell is this path going. It kept going and going by the way, but to the rear of the mountain. I kept walking for a mile and thought something isnt right, luckily theres a bare signal so i could check out the map!

Figured out that theres a cairn that used to be there to mark the turn, that wasnt there anymore. And from the trail (if i could call it a trail), it explains how this paths are rarely used. But oh well managed to get to the summit. Was a glorious day nevertheless, after all, we the new gens really need os map immediately otherwise we are as lost as sheeps!

Don't know what there is about meeting other people on these hills The people we met had a photocopy of Irvine Butterfield's route, and assured us that "that" descent was it. So we promptly set off down it. For some reason (possibly the verticality, ) they didn't follow and we never saw them again, leaving us to blunder down what was probably the same precipice as you. We learned a valuable lesson,. that however bad a map reader you might be, you are probably better than someone with a dodgy photocopy.