Quite possibly, another report from a hill everyone else has already climbed! But – having found the one area not quite sharing the customarily awful August bank holiday forecast – an easy walk up one of Yorkshire’s ‘Big Three’ on an interesting route.

our_route.gpx Open full screen  NB: Walkhighlands is not responsible for the accuracy of gpx files in users posts
I hadn’t realised that 9.00 was an exceptionally early start, but it was certainly surprising to see an empty carpark and quiet footpaths on such a popular hill on a holiday – the locals are obviously late starters, as there was barely room to move in Clapham by lunchtime… This route started with a very pleasant mile or so along the nature trail through the Ingleborough Hall estate - I’ve seen the ‘toll’ for this get some real stick elsewhere, but it’s a nice wooded walk past the lake and falls on a very well-kept path. (And it’s only 60p, for goodness sake! About a mouthful of beer these days…). The path narrows through Clapdale into the short but beautiful narrow ravine of Trow Gill and onto the open moor. Disappointingly though, Gaping Gill was full of the detritus of its ‘open-to-the-public’ day, and any view of its depths blocked by winches and assorted safety measures. 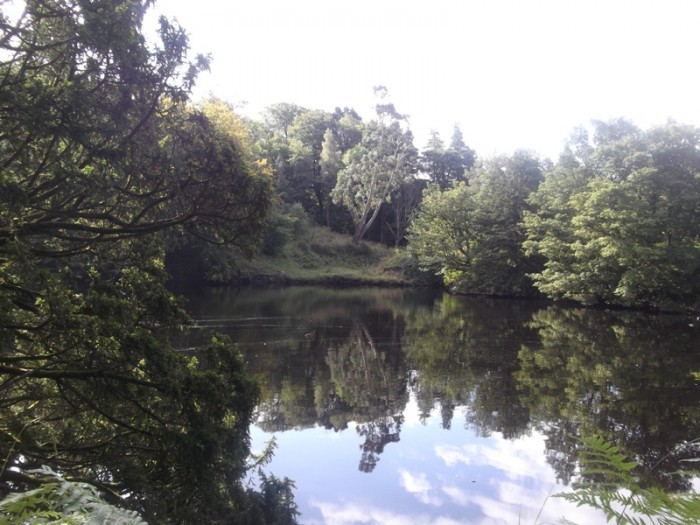 The Lake north of Clapham Encombe Bridge on The Lake A rather 'spoilt' view of Gaping GIll

From here, the path up to and over Little Ingleborough to the main top is steep but, on a very well (and – it appears – expensively) made path of gravel and broad stone steps, easy and quick going. Ingleborough has some quite steep limestone escarpments, but the summit area itself is very broad and flat – it’s worth wandering around the edges for the best views of the surrounding dales and hills, with the limestone crops and Whernside to the west catching the eye especially, and – as for most of the morning – the distinctive silhouette of Pen y Ghent to the east prominent. Back to Little Ingleborough Limestone on Twiselton Scars from Ingleborough Hewitt-‘baggers’ will follow this with the little neighbouring lump of Simon Fell, and – after a clear stepped path down from the main summit – the wet grassy track that takes you there is rather a comedown. The hill itself is pretty nondescript, but it does offer some quite different prospects of Ingleborough, and also of the smaller hills to the north-east. After squeezing between the barbed-wire and the wall, the grassy ride across the ridge to Lord’s Seat is deceptively easy – the descent back to the main Ingleborough-Horton track thereafter being a horribly tricky zigzag between some very spongy and deep bogs. The route to and from Simon Fell is a reminder that – before the path-builders worked their wonders – climbing Ingleborough might not always have been the easy pleasure it is now… 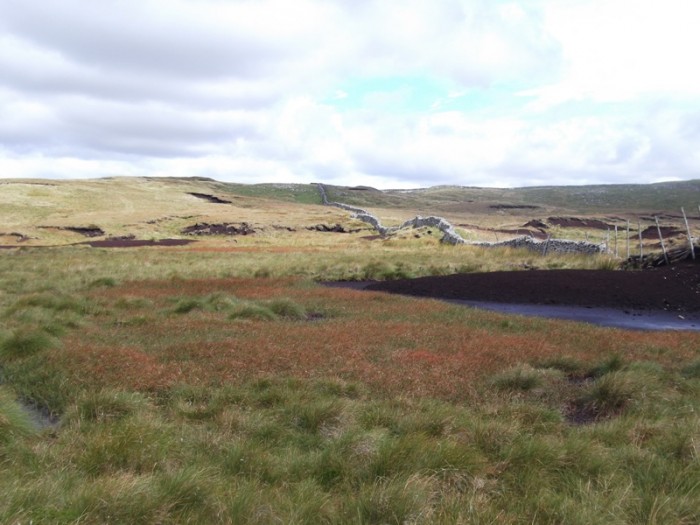 It’s a comfortable stroll from there gradually back down to Clapham, cutting off the main path to follow a clear grassy track over the limestone ‘pavements’ south to join the Long Lane bridleway. Quite uneventful going from here, but pleasant views over the earlier route through Clapdale and of Thwaites Scar above to the left, before dropping down through the unusual dark path-tunnels back to the start. What a cracking walk, but then I would say that being a yorkshireman myself

beautiful pics of an area I am starting to miss more than I realised. Surprised to see so few shots with other people wandering about as this used to be a real crowd puller....maybe the playstation is winning the war on life

Really enjoyed this P, thanks for sharing

Excellent report and good photos. Was the bosun's chair down Gaping Gill operating? They often do it on a Bank Holiday.I'm no caver but it's an unfulfilled ambition. Ingleborough is a fantastic viewpoint though for the defenders of the hillfort it must have been miserable in winter (someone must have had to fetch water from somewhere as well). There is a skinflints route which avoids Clapdale but I think you'd have to be pretty mean spirited to miss it out for the sake of 60p. The tunnels at Clapham are interesting.They were dug so that the Lord of the Manor didn't have to watch peasants crossing his lawn.

Aside from the annoying reminder of modern civilization in the pic of Gaping Gill, that was great!

Great photos and brought back lots of memories. I used to go up every 2 weeks between 84 and 86 rain, snow or shine when I lived in the area then straight back to the cavers cafe in the village for a steaming brew. Must revisit sometime soon, such a easy detour off the M6

ndhudson wrote:Aside from the annoying reminder of modern civilization in the pic of Gaping Gill, that was great!

It's not a permanent feature. They set this up a couple of times a year to allow the public (those brave enough) access to the pothole. All money made goes to the funds of the caving clubs (Bradford pothole club and Craven pothole club). It's something I've been aiming to do for years but have never got round to it yet, I always seem to say "next year". I'm told it's a memorable experience.

colgregg wrote:It's not a permanent feature. They set this up a couple of times a year to allow the public (those brave enough) access to the pothole. All money made goes to the funds of the caving clubs (Bradford pothole club and Craven pothole club). It's something I've been aiming to do for years but have never got round to it yet, I always seem to say "next year". I'm told it's a memorable experience.

Well that's cool! I looked it up...sounds like a totally new way to see the hills, from the inside out! Go for it, Colgregg...I would love to see that trip report!

As mentioned the bosun's chair isn't a permanent feature and does go towards funding the cave rescue service as well. For those feeling brave the trip is well worth the effort as Gaping Ghyll main chamber is huge (apparently York Minster or St Pauls Cathedral would fit into it - so I was told!). As a former potholer I have also been fortunate enough to get to the main chamber via Bar Pot and Disappointment Pot - both amazing trips if you can find a friendly pothole club to take you! Reminisence over this is after all a walking site!! Great pictures and looks like a fantastic walk!