I had a sense that this could be bit of a race.

The girl on the telly the night before suggested that bad weather would be pushing in from the west. So, the original plan of driving from Pitlochry to Ben Lawers was shelved. It would be far better to try something more local and that lent itself to an early start.

Missing the hotel breakfast (I know, such decadence), I was munching a cereal bar and an apple as I managed to miss a red squirrel when turning off the main road at Blair Atholl. The car was parked, the boots were on and I was striding out by 7.30am. Apart from the Alps, the last time I'd been out on the hill that early was after an overnight bivvi on Am Bodach before doing Aonach Eagach at dawn back in university days!

Anyway, back to the present. The thinest wisps of cloud clung across the top of Carn Liath as I was entertained by curlews while heading off up the track from Loch Moraig. The rusty roofs of the wooden sheds (positioned for seemingly obligatory photographs) were soon passed as the ridge was approached. 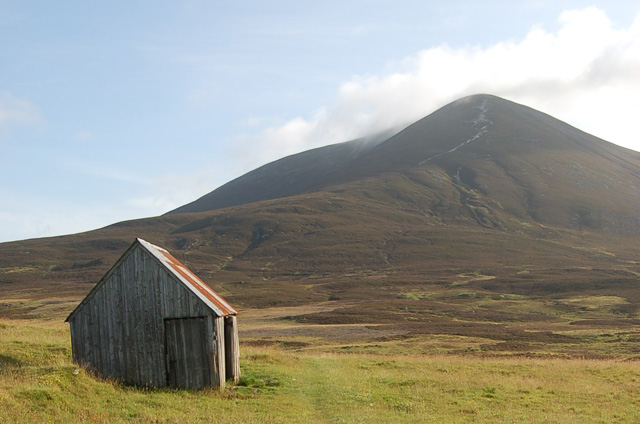 If it was going to be a race against the weather, I wanted to get this bit over quickly. So, head down, and think about the full Scottish breakfast you were missing. Within an hour the top was playing hide-and-seek as clouds toyed with the summit. Fortunately, the early breeze had accelerated to a chilly wind by the time the top was reached just ninety minutes after leaving the car. This meant that the cloud didn't seem to be hanging around for too long, and it was reassuring that the route ahead could be seen in case visibility deteriorated.

South from summit of Carn Liath

And what a ride - it was more like a big dipper. Down to the left - swing round to the right - dip sharply down to the left again - before sweeping up the ridge to the summit of Braigh Coire Chruinn Bhalgain - which was reached within an hour. With the threat of weather in the back of my mind I even enjoyed a gentle jog along the easy ground across the middle ridge to keep ahead of time. Looking back at the darkening line that was forming across the sky, my tactics seemed to be working.

Lights off over Carn Liath

Again, from the top of the second summit of the day, the way ahead was still clear, with more sweeping slopes and rounded ridges. There was time to watch a herd of deer grazing below at the head of Glas Leathad before the easiest but highest slopes of the day were tackled up to Carn nan Gabhar.

Sixty minutes later I was entertaining thoughts of having cracked it. A clear day without having to break out the waterproofs. Then, just a couple of hundred feet from the top, my complacency caught up with me as a squall hit. The cloud and rain stayed long enough to know that I'd passed one cairn and the trig point, and that there was another cairn up there somewhere. The lie of the land made the top cairn easy to find in the mist - just three and half hours from the car. 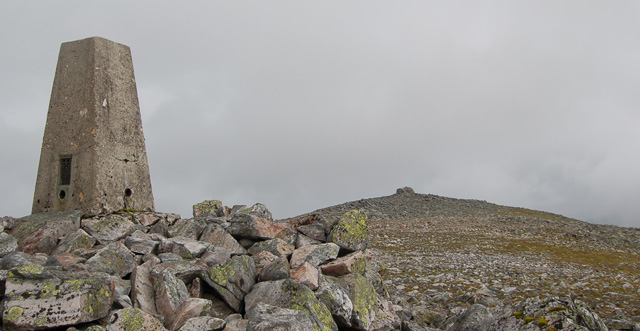 However, someone up there was smiling and prepared to reward me with a view as the start of the descent benefitted from the weather clearing again. The stroll over Airgiod Bheinn opened up out of the clouds and the attractive ridge walk followed.

A zig-zag path down the north west slope of Airgiod Bheinn had been visible when coming over BCCB (I can't pronounce it, and I'm not typing it all again). This helped in deciding to ignore a couple of tracks veering off to the left fom the ridge. After a while the switchback path petered out, but not before being able to see a direct, if somewhat wet, line across to the path leading out of the glen.

The walk out skirted round the lower slopes of Bheinn Bheag and Carn Liath before coming across a line of old shooting positions. Following these downhill the larger track was soon reached, and after a few minutes the familiar sight of those rusty roofs meant that the car was not too far away.

The return towards Loch Moraig saw more heavy weather building up again in the south west and above the hills round Loch Tay. And it had the last word. As the squall came in - it'll pass, it'll pass. But of course, it didn't this time.

Nevertheless, it had been a great day out and a great walk. Once the height had been gained while still fresh (or not weighed down by a full fry-up breakfast), its twists, turns and ridges could be enjoyed to the full. And back down? It was off to the theatre that evening in Pitlochry - the next challenge was to stay awake to the final curtain.

Great report and pics - like the panoramic style shots. Cast my mind back to a favourite walk.