This was a trip which had to be postponed the previous week due to work commitments, however it turned out to be fortuitous as the weather had taken a turn for the better to give myself and my regular walking companions Lee and Bobby a good day to tackle these superb hills.

We set off from the forestry car park at around half 9, after disaster struck and I started my day by snapping a boot lace (note to self: bring spare laces). Novice error overcome by hastily rigging a makeshift half laced boot we were on our way and soon crossing the river, not without a missing a few stepping stones! The way then led through some trees and heading upwards on a rough and at places rather boggy path. Start of walk through forest Following path beside the burn

) This led to a straightforward few steps over a small burn and onwards and upwards again where we eventually emerged onto the forestry road and a new bridge. 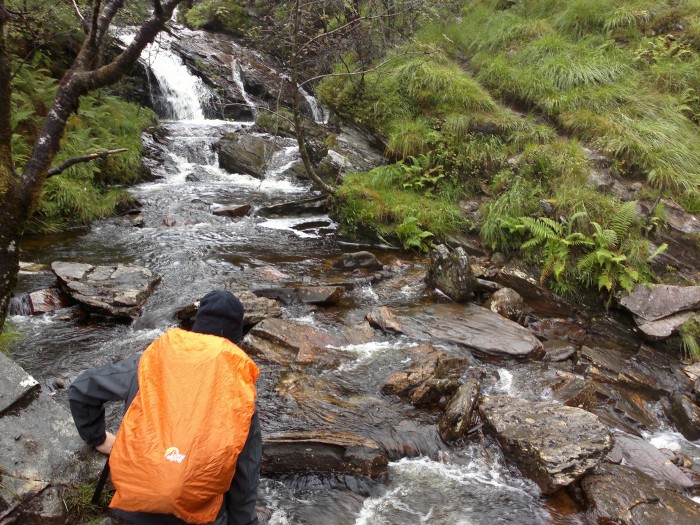 Crossing where the small cairn indicates From this point the path became increasingly boggy and was at places unpassable, we were forced to make detours further to the side to continue. With a few careful, acrobatic manoeuvres we reached the new fence and began our way up the slopes towards the bealach. Views were very intermittent at this point in the day, becoming cloud enshrouded more often than not. Climbing to the bealach

We reached the bealach and with little difficulty climbed to the summit of Beinn a 'Chleibh in surprisingly short time. The clouds were still down as we retraced our steps to the bealach for the longer, harder climb up the path to Ben Lui. After a bit of a slog we came to the summit ridge of Lui, again in cloud. Rather despondent at the lack of a view we took a breather. Fortunately within a few minutes the clouds departed leaving us with some fine views down Glen Cononish. We had timed it to perfection as we had just passed a few walkers who had left the summit as we were arriving and would have missed out View down to Glen Cononish when we arrived Me at Ben Lui summit 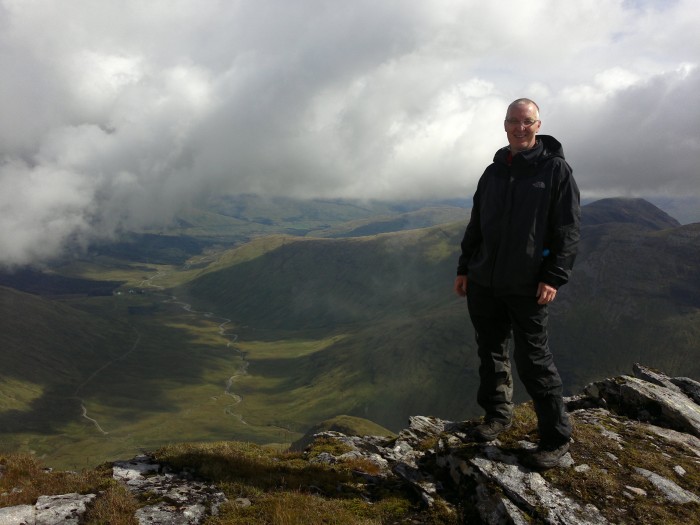 In no particular hurry to leave we left our packs and climbed the short haul up to the true summit of Ben Lui a little way back along the ridgeline. Two of the walkers who had passed us minutes before took the route off the summit down the Eastern ridge which we decided would also be our route of descent as it looked to shorten the journey back to the forestry fence line. A few small downclimbs were passed in no time and we were continuing down the grassy slopes making good time. The clouds had left us with considerably improved vistas on our descent than our climb up so we enjoyed a good look over to Ben Cruachan, which I had climbed twice recently and never got to see the top. Looking over towards Ben Cruachan from slopes of Ben Lui

Apart from Bobby taking a fall on the boggy slopes through the trees we were soon back at the car park having enjoyed another fine day out.

Re: Ben Lui & Beinn a' Chleibh

Nice pictures kw. The word "boggy" seems to crop up quite a lot in your report

. I see the path through the forest hasn't dried up any since I went through in July. It was on these boggy bits back to the car that made me decide my trusty boots had gotten wet once too often and were destined for the bin!