Me and my brother were keen to get out again while he was onshore and having checked the weather reports we decided on Ben Macdui and Cairngorm. Other than the millions of midges on arrival at the ski centre it was a cracking walk.

I forgot my camera and had to rely on my phone so please excuse the lack of decent pics.

At the ski centre we headed off to the west towards the path that would take us along the top of Lairig Ghru. There seemed to be a few paths to choose from but it wasn't difficult to pick out the right one as there was a couple of groups of walkers about ten minutes ahead of us. Thankfully we soon left the midges behind.

The climb wasn't too steep to start with but ramped up a bit after a while so I stopped on plenty of occasions for a breather and was happy to get up onto the plateau for a bit of an easier time.

It wasn't long before we took a turn uphill again and about here we spotted a lone reindeer silhouetted against the skyline on the path above us. He spotted us and wasn't at all scared and from about 100 meters away initially walked towards us. He came to about 30 meters away then wandered downhill off the path but wasn't at all worried about our presence. 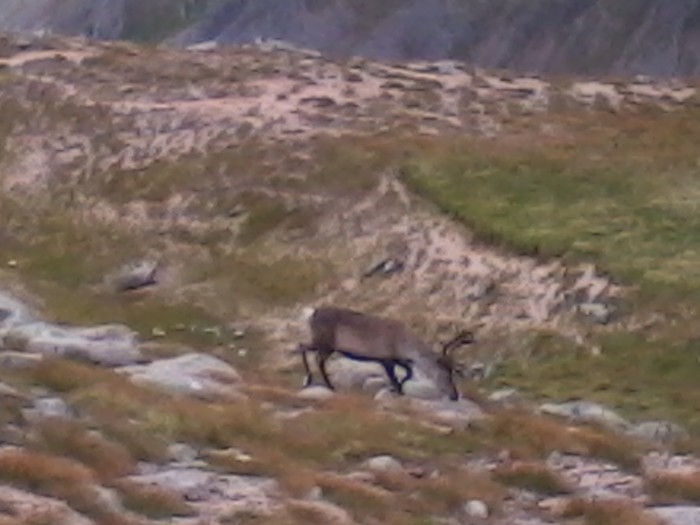 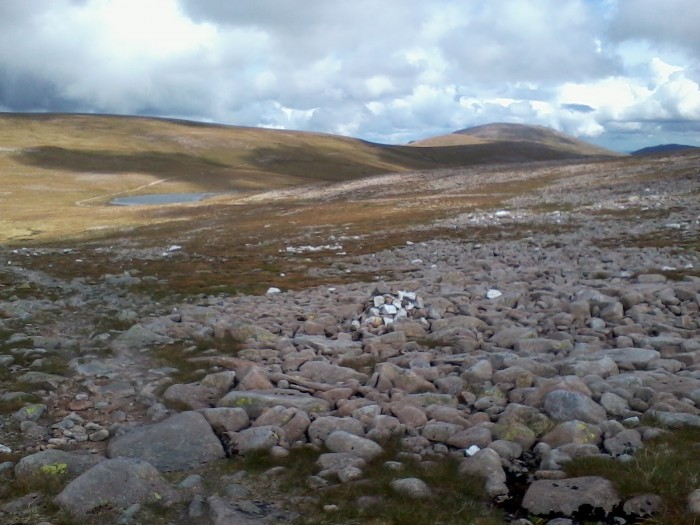 Sight of Cairn Gorm and the path towards it.

As we kept moving we followed the line of cairns but lost the path a bit in the boulder field and decided to head off to our left and pick up a path another walker seemed to be on. This was okay for a bit but we still had a bit of boulder scrambling to contend with.

Around about here, where there wasn't a boulder field it seemed like a bit of a moonscape. 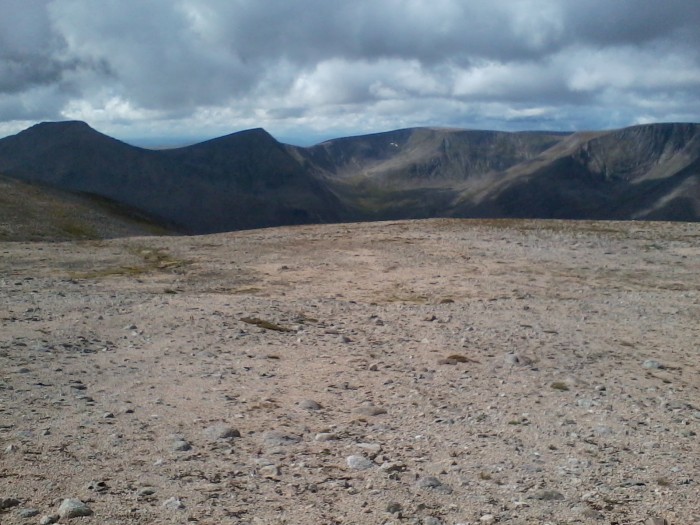 It had been fairly flat across the plateau but we soon got to the bottom of the final climb up Ben Macdui which was another signal for me to have regular breathers as we climbed. On reaching the summit there was about another ten folk there already. It was breezy and we had a seat in one of the numerous shelters for a bite to eat before exploring and getting a pic or two before retracing our steps back to Lochan Buidhe then turning north east towards Cairn Gorm. 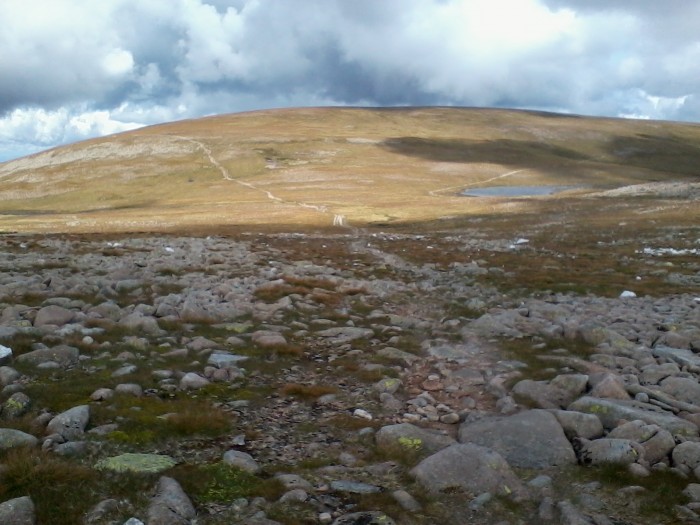 We came from the left, Cairn Gorm's to the right.

The path was easy to follow and the walking pretty easy but there's a bit of a climb up and around Stob Coire an t-Sneachda but it's well worth it for the views across Loch Morlich and to Aviemore in the distance.

There's a bit of downhill next then a wander round to the final climb up Cairn Gorm. From a distance the path up seems to just disappear but as you climb it is visible and fairly easy to follow. More rest stops/juice breaks for me though.

Topping out it was the most folk I'd seen on a summit in my short experience of Munro walking. I suppose it's only to be expected though when there's a train to take you practically to the top. Bro at this point remarked that it's more satisfying if you make the effort and do the walk. I couldn't agree more and was again chuffed with my/our efforts for the day.

From here it doesn't look far but it was over an hour before we got back to the car park. As I'd experienced on descents in the past my knees were suffering badly so I reckon I'll have to get sticks to help take the strain. As we went down the road we passed some walkers heading up the way wearing midgie nets over their heads. I confess I had a wee chuckle at the time but they were the ones with brains as I suffered for days afterwards.

Re: Two from the Ski Centre

Great report and a great wee route that I have done many times with a slightly different, more interesting finish. If you take a right at the Ptarmigan restaurant there is a pleasant walk off via Sron an Aonaich. Ive just posted a very similar route in the last week.