Had been itching to get out again, it's been about 7 weeks since our last venture and with the next few weekends already booked up we had to get out. The weather was up and down over the run-in to the weekend, and having checked the MWIS on Friday afternoon the CG area was the place to be.

As it had been a while since our last outing we didn’t want anything to strenuous, and RosythAlly was wanting an easy trail to experiment with footwear on. So a quick squint at the singles and doubles, and this was the best choice - the high user rating also made us quizitive!

So up at half 5 and picked up at half 6 we made our way northwards on the dreary M90 and A9 - again!

As we made our way past Blair Atholl I started to fiddle with the cars in-built sat nav, and much to my surprise Feshiebridge was found: 2 in fact, which one to go for? Obvious choice was the first on the list.

Coming off at Newtonmore we made our way on to Kingussie, taking a right and joining the B970 which took us back under the A9 and along the south side of Insh Marshes Nature Reserve. Following the road signs we took a right for Feshiebridge, as also directed by the sat nav. After a couple of mile down this road, it started to deteriorate. Stop the car!
Out into the boot to get the OS map out, and out with the sat nav too. Wrong road! the signs sent us the wrong bleedin' way! So spun the car round and made our way back up the track using the GPS for guidance. The turnoff we required was about 2.5 mile further up the road, to which there were signs saying Feshiebridge and pointing in all directions! But alas, we found the correct turn off and made our way along the road and past the gliding club. When you come to a cross roads, take a left and an immediate left again and park up.

There is a green gate across the track to stop vehicles but there is ample room to maneuver round it, and from here continue on the track through the woods. And when you hit the first definitive split in the track bare left and you should start to gain height.
We didn't do this and initially continued straight ahead and crossed the wooden bridge over Allt Ruadh. So, about turn and back to the split in the track, and made our way upwards.

Although a good track it is a little loose underfoot but not that bad at all.

Breaking out through the trees there is another split in the path, heading up to the left is the continuation of the wide, graveled path. Splitting off to the right is a narrow track which has been worn into the grass. Take this and you should come to a burn crossing, Allt nam Bo, which is easily crossable over slightly submerged stepping stones. The path deteriorates slightly from here for a stretch but soon regains its form making for good walking and covering ground. Then you come across Allt Coire na Cloiche, which had to be jumped as no definite crossing could be found. The path continues onwards and soon you have to cross another burn, Allt a'Chrom-alltain, which again required a slight vaulting.
The path has now diminished into a muddy, boggy, peat-hagged route that climbs up steadily, but altitude is quickly gained. The route leads you to a small flat section of the hill to which exposure was quite obvious, we were being beaten by the constant gale, but from here you pick your own route up.

We seen a line of rocks prominent from the grass and we thought that we would ascend on, and to the side of this. Left leg placed up to take a step and push myself up and the hamstring contracted! I managed to keep myself upright and put balance on my right leg to stop myself collapsing and rolling about like an eejit! The rocks proved handy in aiding the stretching of the hammy, to which I continued, gingerly, upwards and onwards.

The ground in front was rolling away, indicating that we must be nearing the edge, and soon we were on the relative flat plateau, and the summit was in sight. 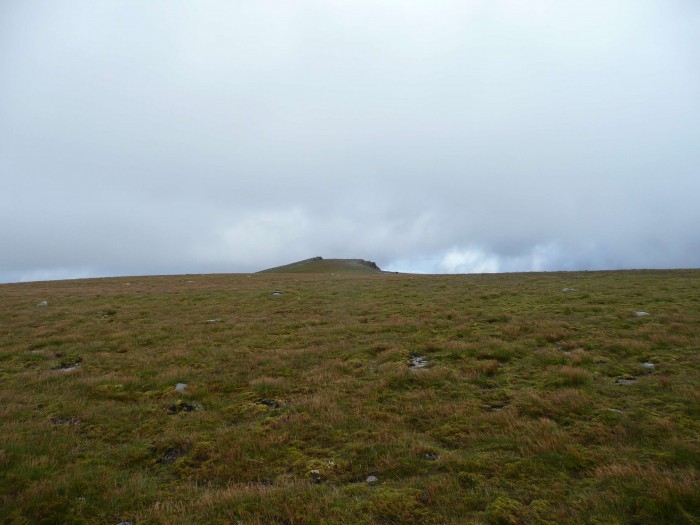 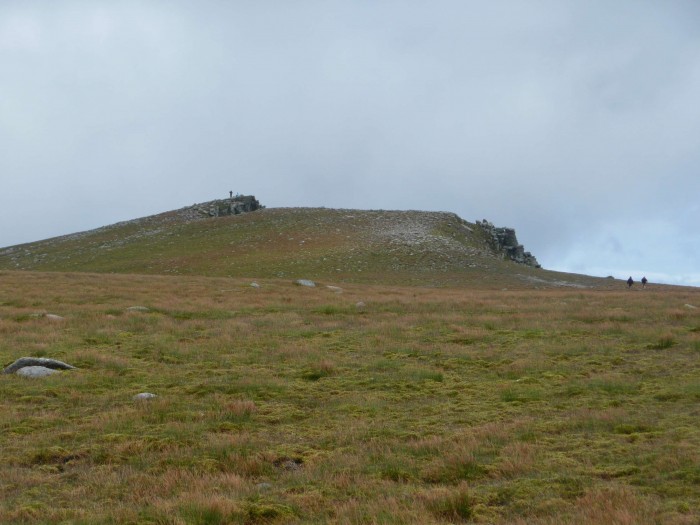 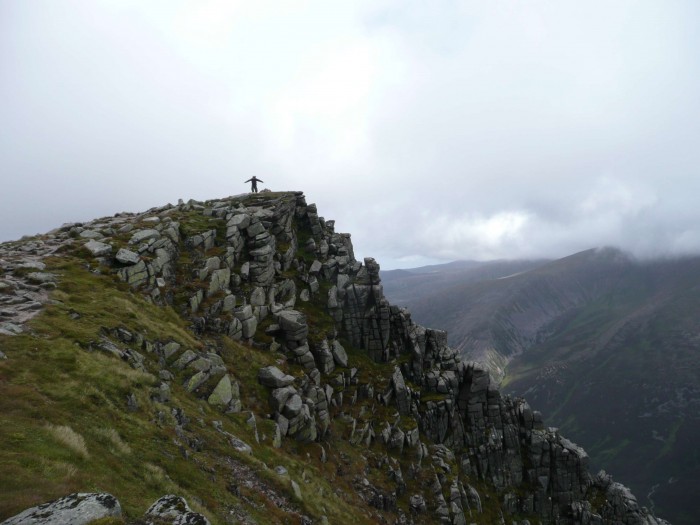 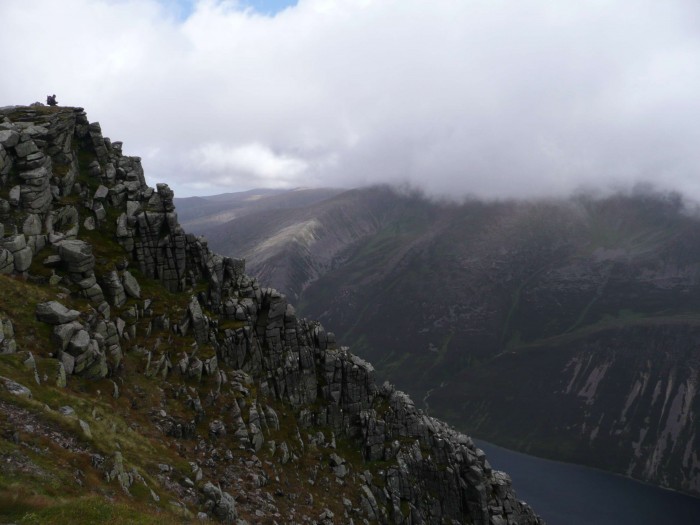 We walked towards the cliff edge, and although cloud had covered Braeriach, we were treated to spectacular views of Loch Eanaich below. 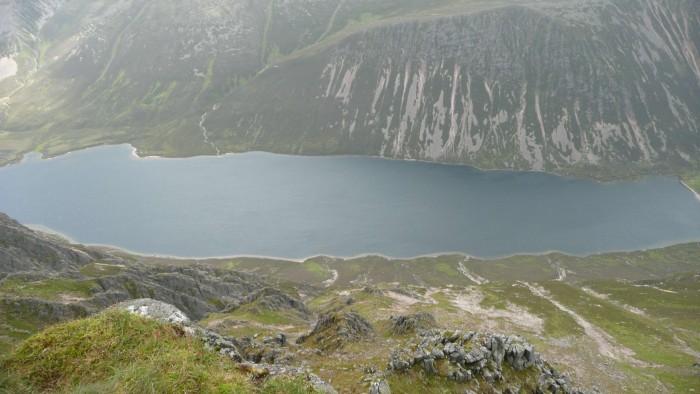 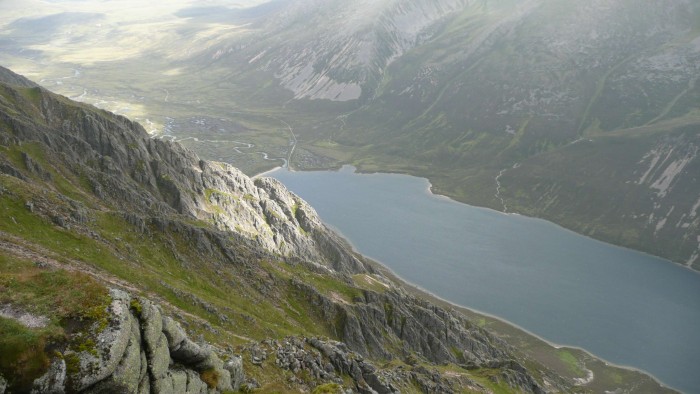 The wind was still constantly battering us and there is no shelter here, but we had to try and find refuge in order to have a wee break. Just north of the summit, we clambered amongst the holds and ledges of No. 5 Buttress that did give some shelter, enough to break anyway.

10/15 minutes later we were packed up and on our way again, and made our way round to No. 4 Buttress to get the views of the summit and the southern backdrop. The decision was made to by-pass the northern top of Sgóran Dubh Mór, and we made a bee-line for Meall Buidhe, walking in a diagonal line just to maintain a straight bearing whilst walking with the wind now hitting us from the side. The route here on WH takes you over Geal-charn also: Sod that!
I just wanted out of the wind, and the best way to do that was to drop height, and with that - just past the cairn (labeled at 866m) - we descended west, on relatively steep, deep heather slopes aiming to miss out the tributary of Allt Coire na Cloiche and walk parallel to it back down to the track. The heather certainly didn’t make it easy, RosythAlly with his slender frame gliding over the heather, and my larger bulk finding and fallen into holes that he did not find!
My delight was restored however when RosythAlly found a burn under the heather and toppled over! Good times!

We covered good ground and sure enough the drop in altitude resulted in a significant reduction in the battering of the wind. Once down at the track, a wee refreshing cool down was had in the river before what was almost a jog back to the car, retracing our path, in now glorious clear blue skies and a roasting sun!