I had originall intended to include the two munros to the north east to make a 4 munro trek but the weather forecast warned of a heavy rain shower at 4pm so i decided just to do the two. By the time i was finished i was glad of my original decision, i found it to be quite an exhausting walk - far more so than the 6 munro trek i'd completed at Glenshee an few weeks previously.

I left Dundee at 8am and was at the layby beside the railway station in time to set off at 10. The path up through the forest at the bottom isn't the greatest - there's a lot of overgrown vegetation and in places a machete would have been useful

It's a relief when the trees start to thin out but then the trees in your face problem is soon replaced by the boggy ground problem. This was quite a common theme as far up as the bealach but it's just something you have to accept i guess. The bogginess is particularly bad in the approach to the dam. At this stage the cloud was quite low so i couldn't see the ridge. If you're going west to east then the track along the west of the reservoir is a very good one - far better than the path along the east side which is narrow and boggy. This level stretch of track should be enjoyed because once you reach the north end of the reservoir it's up, up, up. I turned left at the end of the track and began to ascend to the right of the burn. I stopped for a two minute breather at the bealach before taking on the summit. Again, it's up, up, up with no level bits to rest your legs. Inbetween looking down to put one foot in front of the other i noticed a windfarm in the distance. Some people don't like these but i don't really mind them. There were also lots of birds, i don't know what kind the were but they were big. I also took a snap of the reservoir which by now looked a long way down. 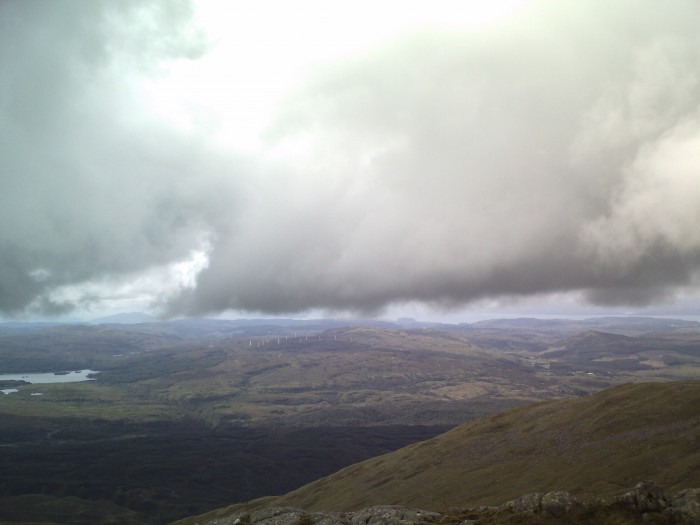 The terrain gets quite rocky towards the summit The views from the summit were impaired by the low lying cloud which was beginning to lift but i couldn't hang around up there for too long as i knew i had to beat the forecasted 4pm rain. The descent from Ben Cruachan wasn't too bad in dry conditions but wet rocks would have made it a different proposition. Below is part of my route down - i'd imagine it would be far easier to climb up. I chatted to a pair of lads going the opposite way further along and i think they had the right idea, east to west is definitely the way to go. After a tricky descent down rocks the views started to open up both back towards Ben Cruachan but more impressively along the ridge to Stob Diam and also down to the reservoir. Again, pretty straighforward to negotiate on dry rocks but i wouldn't fancy it in the rain.

As i made steady progress along the ridge i was given a pleasant surprise when looking back towards Ben Cruachan. The northern cliffs come into view and they're really quite dramatic. It was then upwards again to Stob Diamh and a healthy dose of jelly-legs. The views from the top were impressive though, particularly out towards Ben Starav, Ben Nevis and Glencoe. Before walking along to the burn by which i descended towards the reservoir i took a couple of final snaps of Ben Cruachan and the reservoir. Upon reaching the top of the burn i made my first mistake of the day and crossed over to the left hand side thinking i might not get a better opportunity. The ground on the left was on a pretty steep slippery slope with lots of plantlife and was generally quite hard going. To my disgust i reached the bottom and saw a path accompanying the burn all the way down on its right hand side with an easy crossing at the bottom. Oh well, by that stage it was done anyway.

The path back along the east of the reservoir was narrow and boggy and after a tough trek i'd have prefered the smooth track on the west side - another good reason to do the walk east to west.

Before i scuttled off back through the forest to the car and back to Dundee for a fish supper i took one last snap of the dam with Ben Cruachan (this time uncovered by clouds) in the background. Despite the terrain being quite rough i found this to be a thoroughly enjoyable walk, possibly my favourite of this year and it's given me a real taste to do some more challenging ridge-walking next summer.

Looks like it was a nice day up there. Was aiming to have a go at this yesterday but end up fixing water leaks in the house instead

Kind of hoping September is going to be kind weather wise for walks. Nice Report. Was also looking at having a go at all 4 Munros in the area but looking at this report don't think I'll have enough daylight left this year.

NIce report and pics, looking forward to doing this one day, views look pretty impressive on a clear day.