There are some hills out there, which titillate the imagination and are like no other. I had driven past this gem in June but on a brilliant day, had sworn to my wife that I would not leave her in the car for 2 hours to dash up and down. In retrospect, this was a very good idea because I found myself at its foot on Saturday at 1500. While many teeth were being gnashed and Scottish nervousness surrounding the national team was rife (fit's new?), I appeared to be the only one around and I was happy in my heart. Although this mountain was in cloud, I was pretty hopeful that it would clear up as the afternoon progressed. The path is fantastic and the East tower looms above you as you ascend. It was perhaps 45 minutes to reach the plateau and I was in the cloud - this won't do. I explored the Eastern aspect of the mountain and took daft shots of some of the crazy towers and drops. I willed the cloud to move but after half an hour, decided I would crack on and tackle the Western part - the 'tricky' part. When reading guide books and other reports on the 'mauvais pas' of any hill, one wonders what awaits. Wrongly, I began climbing a pretty formidable tower thinking that this was more akin to rock-climbing. 10 feet up, I decided this was probably wrong and I attempted a tricky descent - thankfully, Scottish crowds were not in abundance and I returned to stable ground, pride and body intact - ****. Some of the towers and pinnacles defied gravity - one was a 25 foot totem pole, which looked ready to topple at any-time. It felt like I was standing on a rock Stegosauraus! I eventually found the bad step and appraised it from above. It looked okay but certainly the easiest way was either head on or from the left hand side. I decided to take a wee photo of the climb from above - it shows you that there is a nice cleft, which can be reached and allows a good pull up. From here, the route takes you the summit and wonderful views across to the Summer Isles and beyond. I sat and relaxed for a demi-hour and wallowed in the unexpected peace on this jewel of the Scottish Highlands. Stac Pollaidh - say no more. 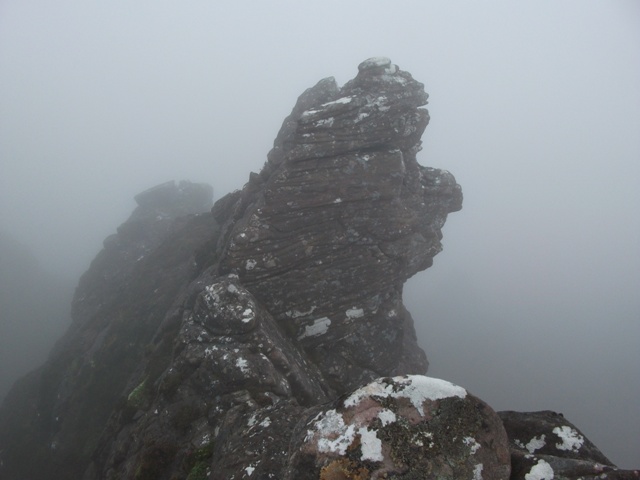 Do not attempt to climb the back wall.. 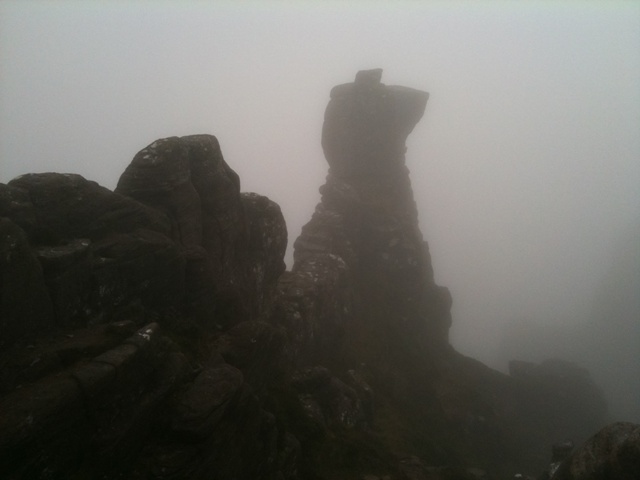 Over to Cul Beag I've yet to tackle this iconic hill but have read many a report. When I do come to give this a go I'm sure I wouldn't remember anyone's advice as to route

Looks easy to get lost in the clag - or is it clear from the various paths which way to go? Or should I print out a good report beforehand?

Aye great to see this amazing wee mountain again.........had great fun on it last month too!

That looks a hairy scarey walk!!

Well done for tackling the Bad Step, Stac Pollaidh has become a favourite of mine. I never made it over there although my brother did. I just couldn't manage the first moves and thought it best not to spoil an excellent three days by doing something stupid. I was perfectly happy on the slightly lower of the two western summits. Mind you in weather like I had who wouldn't have been.
http://www.walkhighlands.co.uk/Forum/viewtopic.php?f=9&t=13158