Munros included on this walk: Beinn a' Chreachain, Beinn Achaladair, Beinn an Dòthaidh


Having done Beinn Dorain a few years ago I decided to do the circuit of Beinn an Dothaidh, Beinn Achlaldair and Beinn a' Chreachain.

Parked the car at the Bridge of Orchy Hotel and walked up the hill to the station and through the underpass under the railway. Follow the obvious path up the side of Allt Coire an Dothaidh to the breach between Beinn Dorain and Beinn an Dothaidh. After all the rain on Sunday this was no where near as boggy as I expected, little did I know I'd be cursing the rain later........

Turn left and follow the path up the south side of Beinn an Dothaidh. It disappears off and on and gets pretty wet and boggy in places. The summit is actually hard to see from here and I ended up taking route one striaght up and found I was just past the summit so had to backtrack. Luckily I had a clear day and had a good view of where I was going to get Beinn Achlaldiar and Beinn a' Chreachain. At this point I realised that my estimate of how far this was and how long it would take me was very wrong! Much longer than I expected. 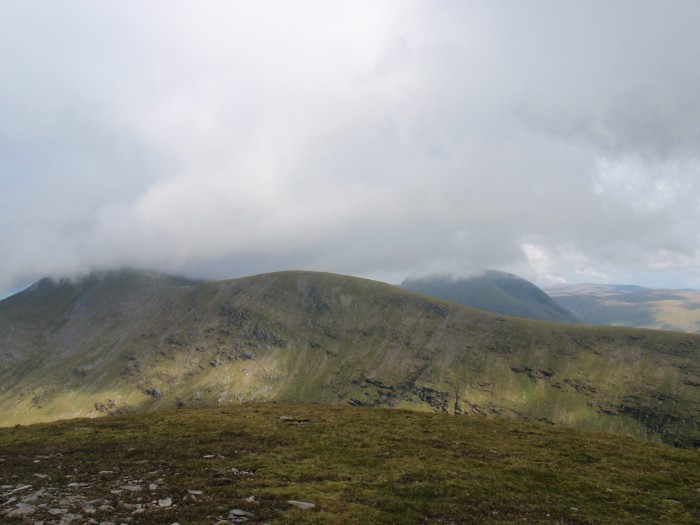 Go east from the summit and make your way round the cliffs towards the path you can see in Coire Achaladair that leads up onto Beinn Achaladair. This is pretty steep to start with but eases off to a steady gradient all the way to the summit. Cracking views over Rannoch Moor too. From here you can see the path all the way to the minor summit of Meall Buidhe and up the steep side of Beinn a' Chreachain. Looking to Meall Buidhe and Beinn a'Chreachain from Beinn Achaladair

The descent from Beinn Achaladair is very steep and slippy. Fell twice after loosing all grip on some rocks. By this stage I was starting to feel it in my legs. Once down into the Coire it's again up and steep before leveling off. You can either go up to Meall Buidhe or skirt round it. Doesn't really save you much going round it. From the summit of Meall Buidhe you pretty much head easy up the very steep side of Beinn a' Chreachain. At the top of this turn left and it's a short walk to the summit. Probably the most satisfying of the three because of the climb up to the summit and the fact it is a proper summit rather than a plateau.

Tirn back on yourself and follw the shoulder of the mountain north. From here you will get amazing views ofCoire an Lochan. My book said to follow this shoulder all the way down but my legs were tired and I was running late for dinner so decided to come off the ridge at the low point and headed for Allt Coire nan Lochan. This was ok walking through wet grass but wasn't too slippy or boggy. 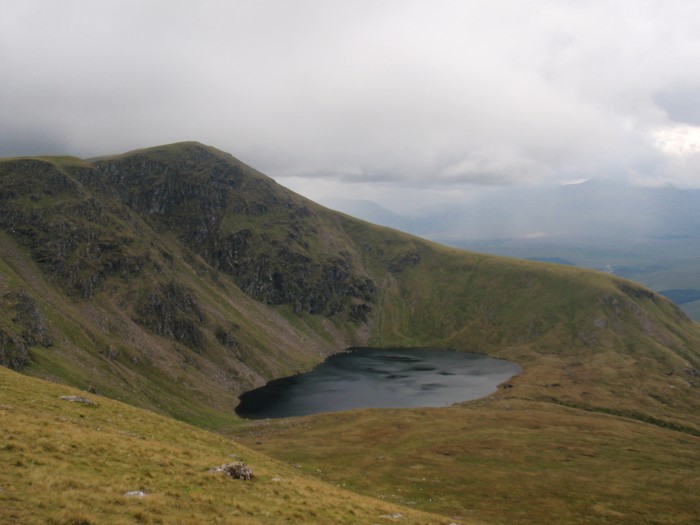 Eventually picked up a path on the west side of the Allt which is where the fun started. As I lost height the bog started, and continued. There are yellow arrows directing you which way to go so areas can be reforested I guess. You eventually end up walking along a trail through the forest that runs along the south side of the railway line. This is a complete bog-fest and by now I was getting serious tired and annoyed! Not only that you end up walking through waist high ferns and new trees so you end up saked from the waist down.

You follow this trail and it eventually cross the railway on a footbridge. You then walk through the forest a bit more then pick up a farm trail along the Water of Tulia. Thankfully this is mostly solid ground. Follow this all the way to Achallander Farm then follow the road from here to where it joins the A82. Just to compound my day this is when it started to pour with rain. By this point I'd stopped caring and just put on my jacket rather than full waterproofs!

Now you have the terrifying walk along the A82 back to Bridge of Orchy. There is no trail that I can find so it is a case of walking along the tarmac then jumping onto the verge when anything comes towards you. Considering you are walking alone two of the best overtaking stretches on this section of the A82 you have to be doubly aware! On the plus side you do come back to the hotel. Unfortunatly I was already 2 hours late for dinner so had to hot foot it back home!

I'd suggest if you are thinking of doing this route you park one car at the Bridge of Orchy Hotel and one at Achallader Farm (there is a large parking area here that walkers are free to use). The map below shows the route roughly but the trail through the forest at the end did twist and turn but essentially followed the railway.