Plan A was to try for Lochnagar but reckoned it was maybe a drive too far from down in Bo'ness, so settled for the Beinn a'Ghlo triple summits. Set off from home about 7.15 and encountered some pretty deep fog heading up the M90 making me wonder what I'd get once I parked up. More fog heading towards Pitlochry but once past that it was blue skies and a bit of cloud but nothing to worry about.

Found the parking area next to Loch Moraig (eventually, after a wee wrong turn...) and it was pretty full up by 9 am. 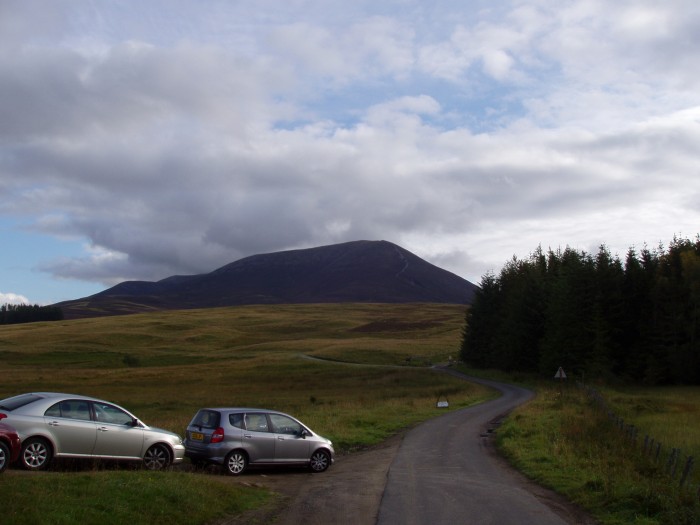 Looking on to Carn Liath at the start.

Forecast was a dry day with freshening winds later on in the afternoon so it was quickly on with the boots and head down the track. From here, Carn Liath looked a brute of a steep climb for me; given that I prefer more gentle zig-zagging ascents for my climbing. But I was here and if I wanted to do the 3 summits then I didn't have much choice. Getting closer to Carn Liath....

Was doing this as a solo climb as my regular partners had previously done the first 2 summits, no idea why they hadn't continued on to Carn nan Gabhar.

Relatively straightforward flattish walking down the main path was the route, then cut down past an old hut to the base of Liath. Wasn't exactly sure of the path but 2 girls and a dog were close by and I let them pass by so I had someone to follow, nothing to do with them wearing shorts and being rather attractive at all.....

Cut across the slightly boggy terrain and followed the girls as they had done this walk before. Always handy when yr not sure of a route....

As the angle of the climb increased I fell further behind but that's usually the case with me wherever I go; I'm always the tail that wags the dog when I'm out with my regular buddies.

Three-quarters of the way up a gent from Oxford who was up visiting his son in Dundee caught up with me and we buddied along the rest of the way. Plenty of scree to get through up this side of Carn Liath and I was making slowish progress, but once past here and onto the plateau it was easier going with plenty of soft grass to walk on and not the scree. Could see the trig cairn ahead of me and made it at just under 2 hrs from starting off which was a decent time for me. 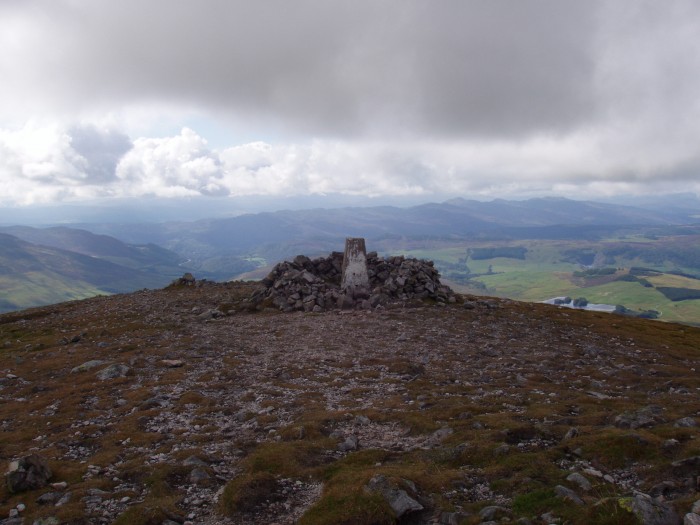 The best was yet to come though, had a short break here then carried on to the ridge down to Braigh Coire Chruinn-Bhalgain. And I have to say, once I spied this ridge I was gobsmacked. It looked absolutely a stunning walk with a short drop and climb back up. In my short munro career it's easily the best looking ridge I've done.... the following photo doesn't really do it justice.... Looking down from the start of the ridge.

Kept up a steady pace along the ridge and made it to the 2nd summit by 1 pm where I met up with the 2 girls and a dog from earlier on. Now I knew why they had some flowers in one of their bags. They were possibly related to one of the guys in the DecAid team who were climbing every munro in Scotland in 43 days and dedicating a small cross at the cairn to a fallen soldier in Afghanistan. A beautiful tribute...... bearing in mind that the team doing the ascents didn't have any vehicles and had to walk / cycle / thumb a lift or even canoe out to the islands to do the ascents. Not sure when they are meant to finish - they might already have done - but kudos for them indeed. Dedication to a fallen soldier in Afghanistan

Having made good time to get to number 2, I had plenty time left to get to the final summit of Carn nan Gabhar. Said farewell to the others as they were heading back to children / partners / wife etc...... on me own then it was.

Headed down the slope looking for the path to drop into the valley then climb up, could see the path on the other side but actually missed it on this side; found a burn heading down and actually assumed that was it, only noticed the path when I was across the other side and looked back. Must have been easy to miss I told myself, reckon I went past it by about 100 yards.

The climb up to the summit of Carn nan Gabhar wasn't too bad, a mixture of grass and scree until you get very close then it's all scree and by this time the wind was beginning to freshen up, but the large first stoney cairn provides excellent shelter even though it's perhaps not the actual summit as that is a wee bit further on. But it was fine shelter for lunch. Timed myself at 5.5 hrs to get here and it was 7.4 miles so that was damn fine in my estimation. Shame my GPS decided to pack in not long after so I don't know the exact time for the return journey. The car park is thataway....

Had a decision as to the return, down through the valley and a probably bogfest or along the ridge of Airgiod Bheinn and a pretty steep descent. Took the valley option and indeed it was a bogfest, maybe the ridge would have been faster. As sometimes seems to be the case, the walk out after a great climb is an anti-climax; took 3.5 hrs and just seemed to last for ever. Had some company at least on the last mile or so which makes it a bit better. 8 hrs round trip wasn't bad at all for me bearing in mind the guide on WH says 9 - 10 hrs. And those 3 take me to 21 for the year and 44 in total. Hoping to get to 50 before winter snows stop me in my tracks..... time will tell.

In summary a thoroughly fabulous day out.......

with some occasional good company as one would expect from fellow mountain-walkers....

These are great hills indeed and you had some great weather too. I did these a while back. with a mixture of mist, sun and eventually rain. Still loved the day though. Despite your bog-fest at the end I think you may have prefered that to the ridge descent. I did this and it was pretty steep in places (I quite like steep, so was in my element