OK, so it's not much of a walk, but you may find it interesting... I was out in my wee boat, tootling around the sea-lochs and channels around Skye. I motored along the north side of the Isle of Scalpay, and, seeing a cave in the cliff by the rocky shore with a sort of tumble-down wall of stones across the front, my curiosity was aroused. I landed between two big slabs, tied the boat to a rock and clambered up to have a look. As I entered, I noted bones strewn on the floor. Taking them to be of a stray sheep, I went farther in, but noticed the floor was worn and indented as though by an animal making its den there. There were paw-prints, I am not sure what of. Not fox or dog, maybe otter or cat, though bigger than a domestic cat. Lynx maybe? On closer inspection the bones seem to be of a deer. There are no sheep on Scalpay at the moment, and the leg bones seem to be longer than a sheep's. It was a creepy place, and , deciding that discretion was the better part of valour, and not actually being there was the better part of discretion, I discretely and valiantly scarpered.
Once out on the open water, in the daylight, I realised how very relieved I was to be out of there! 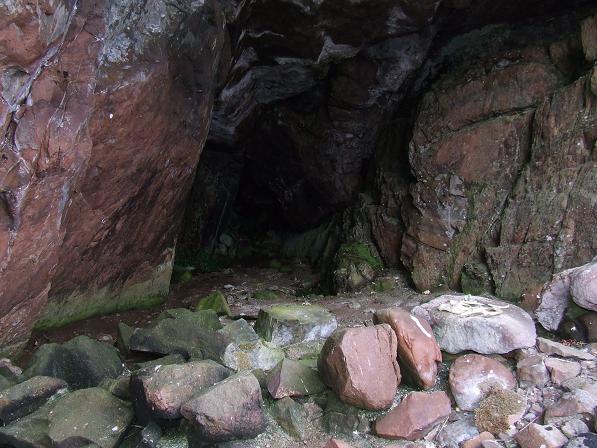 Caberfeidh wrote:Once out on the open water, in the daylight, I realised how very relieved I was to be out of there!

Och ya big girl's blouse, get back there for a wild camp and face those beasties.

Seriously though it does look a bit sinister.

What a spooky place

I've seen that film 'Ravenous' where the guy lures folk into a cave. I'm not going Caberfeidh, I know your game...

I couldn't help thinking of that movie "The Descent" with a troglodyte race of underground cannibals... also thought of Sawny Bean and his race of cave-dwelling cannibals! Couldn't help but make me think of this. Cave looks sort of siimilar too.

Watch for them mermaids Caberfeidh.. they will take the legs from you as soon a look at you

Its a lovely coast line round Scalpay ..any more photos of it ?

As ye wish; more photies. I found it a very tricky coast, espesh. on ye north side. The rocks run out close under the surface for hundreds of yards, so you might be motoring along thinking you are a safe distance offshore when suddenly you scrape over unseen rocks. The coast facing north up the Inner Sound was particularly brutal, reminding me of the approach to the scarey island in the latest remake of King Kong . Maybe that explains the bones in the cave. On further thoughts on the bones and paw prints - something big enough to drag a deer into the cave over rocks, etc.? It has to be a big cat. Which is a scarey thought when exploring on my own! The only sign of human occupation I found on the north side were some run rig marks in the bracken and a few rectangluar walls where people once had their homes. The skerries lie all around the island for a considerable distance; Sgeir Thraid crops up in the middle of nowhere, a mile or more out from Scalpay. Must be a nightmare for vessels larger than my wee inflatable. Thanks for that Caberfeidh, its a trip that I wanted to do this year but not had the time yet. I went to do it several weeks ago but the wind was out the north so I went to Loch Bracadale instead.

I launched at Harlosh and went as far MacLeods Maidens and took in Harlosh Island and Tarnery Island. It was one of my best trips this year..the caves and sea stacks round that area are something else.

I hope to do a boat report on it soon

I upgraded from inflatable to a small 12ft hard shell boat with a cuddy .. and find a fish finder a great help for finding the submerged skerries ..just wish it would find a fish or three too. Ground is 37 ft below in this photo so no problems here

That's a great thing about Skye; if the weather is rough from one direction then the area in the lee of the island should be ok. Well done on upgrading - I could've done with a wee cuddy to huddle in as the rain came on a few times while I was out. I just had to sit there and get soaked. Loch Dunvegan is good, with islands holding seal colonies, coral beaches and excellent scenery all around. There is a launching ramp at Stein, Waternish, beside the old inn. Dunvegan itself doesn't seem to have a launch ramp. I like to get out to beaches where no-one goes, for beach-combing and fossil-hunting. As I went into a wee bay on Scalpay an otter bobbed to the surface and lay on his back at the surface, chewing on a small fish. He didn't seem much bothered by the engine noise. Another good spot on Skye is Heaste, near Broadford, which has a good launching beach and an excellent sheltered sea-loch, Loch Eishort which takes you out past seal colonies and the old castle of Dun Sgaith to Loch Slapin. Out there it is more exposed so care needs to be taken with the weather. Yup..a cuddy makes a great difference to small boats Caberfeidh .. its a lot drier sitting behind it in a chop too.

String a pole between it and the outboard then cover with a tarpaulin and you have an instant tent.. No campsite fees to worry about and unless the cave monster can swim.. you can anchor off Scalpay and have a trouble free kip ..assuming the wind doesn’t get you instead .. so no more worry being a scardy cat

Only down side is you need to trailer it about as it doesn’t fit in the boot of the car.

DonnyW wrote:String a pole between it and the outboard then cover with a tarpaulin and you have an instant tent.

Now that is nifty - I'm impressed. You'd need to be sure of the weather forecast though! I wouldn't fancy waking up and finding myself out of sight of land...

Next time you go invite some friends round for a Bubba-Q ..