Getting lost up Ben Vorlich and Stuc a'Chroin

Getting lost up Ben Vorlich and Stuc a'Chroin


The following report should maybe seen as a way not to climb mountains, but if you are bored with too much planning and nice weather hillwalking this is maybe for you. With one of my friend coming up from down south the agenda of the day was set...drive up north-climb a hill. Sitting at home on Friday evening I guess my living room must have looked familiar to fellow hillwalkers...3 maps spread out on the living room floor, table full of Munro books
and 2 websites open with weather forecasts on my laptop. As it was Friday a few pints helped me to do the job (?)

With the weather forecast looking something like ....10% chance of cloud free mountains, gales and rain it wasn't my typical preferred day of walking, but somehow one needs to earn their 'Rufty Tufty' Hillwalkers badge

Trying to find the least wettest area...I was between Ben Chonzie, Ben Vorlich together with Stuc a'Chroin or a few hills I picked up in Fort William...getting rather tired looking at the weather forecast and trying to decide....or maybe the fact that after 3 pints of beer I felt rather sleepy, I decided to head to bed and just decide on the day which one to climb.

The next day I picked up my friend and together we drove up north, when I reaching Crianlarich, I decided that I should start make my mind up which mountain we were going to climb. so I presented my Munro book to my friend, who choose Ben Vorlich together with Stuc a'Chroin, which meant that we were only 20 min away and ready to head up the hills soon. After we stopped at the little Londis store in Crianlarich, to buy some food, we stopped at the car park about 20 min later ready to climb. 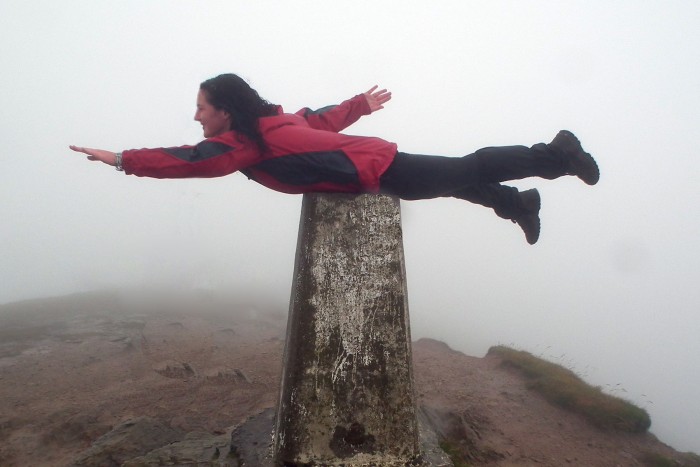 ...Being bettered by gales and rain we took some photos and afterwards the big question was ...how do we get to Stuc a'Chroin as it wasnt visible! Walking around the top for 5 min not really sure which way to head, we saw a group of 4 appearing from the mist. They just told us that they followed 2 other hillwalkers and realized half an hour later that they followed them the wrong way down the hill!
Lol I was slightly relieved that we weren't the only ones lost! Checking their map we finally found the past down and managed to reach the lower grounds between Ben Vorlich and Stuc a'Chroin. 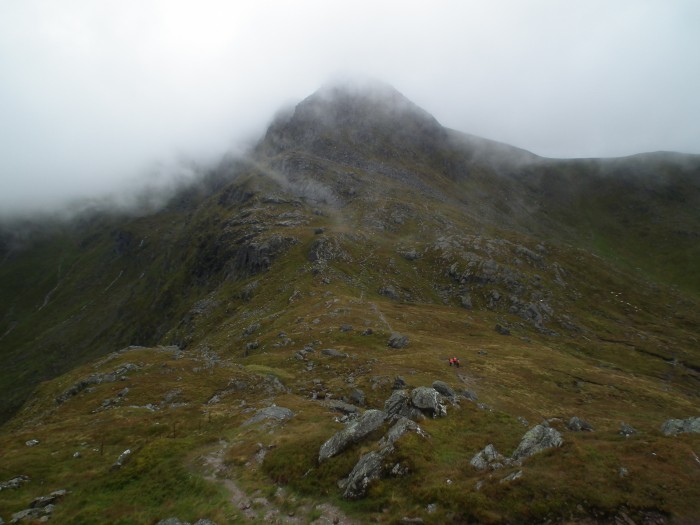 The wind really picked up at that point and made me loose balance a few times (great fun)...As it stopped raining at that point we found a shelter and had lunch. By that time we first 2 guys who lead the others in the wrong direction appeared , telling us that they just spend a good hour walking the wrong path, before they realized their mistake and had to return . When we told them that the group of 4 also followed them and got lost we had a laugh...sheep following each other come to mind! 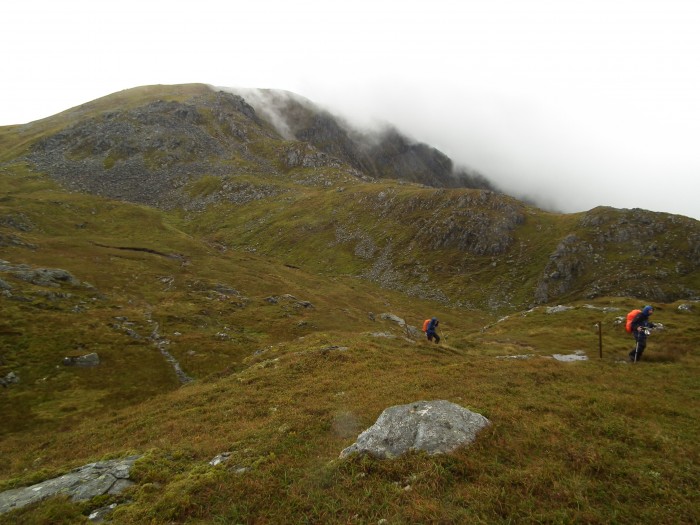 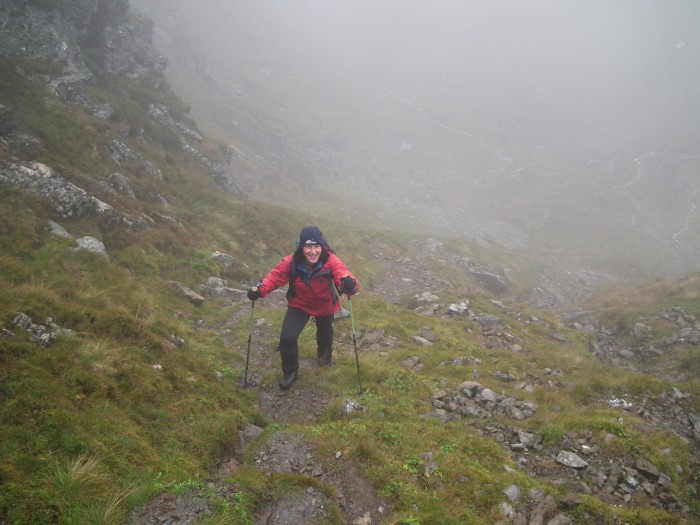 After lunch walking up the steepest route to the top of Stuc a'Chroin was great fun and luckily out of the wind. We reached Stuc a'Chroin and from there the problems started. Somehow we seemed to remember that we had to walk a
circle and we ended up following a path down the grassy slopes...from there the guessing game started and I have to say I completely and utterly lost my bearings...the first hour was spend like...'lets walk to this hill and see from the top
if we can see the path...' and 'I think it is this way' I have to say getting lost while having a friend with me, was far better than getting lost myself! We were in a slight advantage as my friend has a GPS, but he was missing the map...so we could only see we when we headed in the complete different direction. 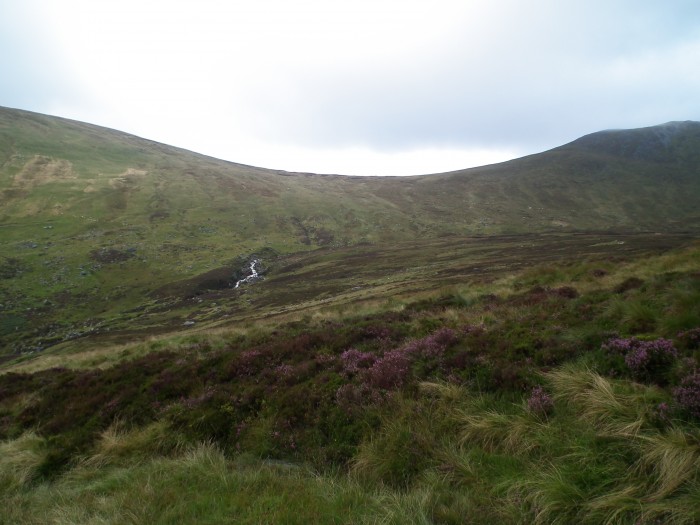 Personally I think getting lost is great! It teaches you more than you could ever learn on a easy walk. Looking at the landscape and deciding which was to go, realizing which kind of grass means waterlogged ground, how to cross
rivers and so on. After following the GPS and trying to complete the circle the book wrote about (obviously making up a new path in return) we spend 2h walking over endless field of purple heather (actually really nice to walk on)
and by that time my boots felt like as if someone poured a pint of water in them. When we finally realized we were back to the right area and after 7h managed to hit the path again...I was ready to kneel down to kiss it 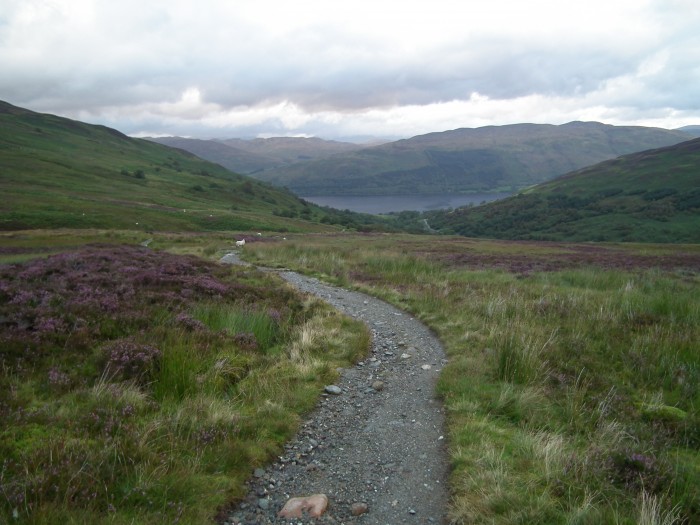 Although I would not suggest to anyone not to take any kind of map with them while walking up Munros in bad weather conditions, it certainly adds a lot of fun to a walk and it teaches you more than you can learn in a book.
I also thought it was interesting that everyone was lost even with maps! Lol even though I guess eventually they found the path they were supposed to walk back down.

I guess that was the route we took....

Luv ur honesty mountainlove,well done bagging this two in that weather,best planking pic on the site by far.

Love the pose on the Trig point. Getting lost is not an option. One must know their position at all times.

Its easy to become disorientated when the clag comes in so map and compass at all times is a must. GPS is also a great help.

Planking...that was my attempt of playing compass to find true north...might need some more metal bangles the next time

If you're in Ayrshire, and you were heading for Ben Vorlich, how did you end up in Crianlarich?

I'm still totally right (like I am on everything. No, really. honest) - Crianlarich is about 20 miles North of Ardvorlich by road.

Lol I am confused now...which other way apart from the drive past Loch Lomond would you take then? Please enlighten me

Loved the wee scramble up Stuc when I did this, great fun

Great report, looks like a good day out even in that weather.

One thing too remember, your never lost, just wandered ! Always in Scotland

Mountainlove wrote:Lol I am confused now...which other way apart from the drive past Loch Lomond would you take then? Please enlighten me

I'd have thought heading up through the trossachs to Callander or even over to Stirling would have been the way to go. Straighter roads and depending where you are in Ayrshire, probably less distance too.

Mountainlove wrote:Lol I am confused now...which other way apart from the drive past Loch Lomond would you take then? Please enlighten me

I'd have thought heading up through the trossachs to Callander or even over to Stirling would have been the way to go. Straighter roads and depending where you are in Ayrshire, probably less distance too.

When Im heading to Killin, from Lanark area I just hit the 74 and travel to Stirling and then come off at Callander and travel up through Lochearnhead. If you were doing these two, I would have thought cutting off right at Lochearnhead and down along the Loch would be the easiest way too get there

monty wrote:Its easy to become disorientated when the clag comes in so map and compass at all times is a must. GPS is also a great help.

well said, in all seriousness

Looks and sounds like you had a great day. Shame about the weather.

I'd have to agree with Monty, getting lost isn't an option, and for me certainly wouldn't be fun. The thought of Mrs skuk wondering why I hadn't called to say I'm off the hill, and the thought of the mountain rescue being scrambled just coz I'd got lost would be embarrassing - but that's just me and the way my mind works.

Sounds like you guys had a good time on those hills I hope you have leaned from it and take Monty's advice about the map and compass.