Sub 2000' hills included on this walk: Hill of Nigg


One of the joys(!) of parenthood is the realisation that you're more flexible and adaptable than you thought you were. You make plans, you discard them, you make a revised plan, it too bites the dust, and eventually your plan bears no resemblance to your original one but it's all you have left so you go with it.

Traditionally, Sally and I have always tried to take a week's holiday on or around our wedding anniversary and go and do something fun and amusing. We've been to Norfolk, Northumberland (Lindisfarne, crazy golf at North Shields, Bamburgh Castle), Durham and North Yorkshire (Middlesbrough Transporter Bridge, MMoMA, Baltic Arts, Angel of the North), Lancashire and the Wirral (Antony Gormley at Crosby, Ness Botanic gardens, Macaroon cafe in Rochdale, Carlisle Castle, Andy Goldsworthy along the A6 to Kendal).

This year, after spending many a year hammering up the A9 to Gills Bay or Scrabster in a frantic attempt to get a ferry to Orkney, we decided we ought to stop in Easter Ross and Sutherland and investigate these areas more fully. Immediately we decided on our destination, I tried to engineer a day in the hills - perhaps Sally could take the boys into Inverness for the day whilst I explored the local munros....? Ben Wyvis or Ben Klibreck are the nearest ones; perhaps Klibreck as you're halfway there from our base on the edge of the Beauly Firth? And if you're at Klibreck, how much more difficult would it be just to tack Ben Hope onto the day. You're as well to hang for a sheep as a lamb.

However, once we got there and we'd seen the weather forecasts, it became apparent that my munro tally was going to stick at 134 for a while longer.

So, I eventually proposed Nigg Hill as a walk for all the family; we would drive up the Black Isle, stopping for dolphin watching at Chanonry Pointhttp://www.undiscoveredscotland.co.uk/rosemarkie/chanonrypoint/, onto a quick tour of the Black Isle Brewery http://www.blackislebrewery.com/, swinging past Udale Bay for a quick look at the bird life on the mud flats, onto Cromarty for lunch (do not miss the Cromarty Bakery - we scored a coffee and walnut Madeira cake for £1, as well as some decent rolls and other cakes) before taking it all to the seafront to watch the newly operational Nigg - Cromarty ferry http://www.cromarty-ferry.co.uk/ ply it's trade to and fro (crossing takes 15 minutes) and gaze across the Cromarty Firth at Nigg Hill just beyond the far ferry terminal.

As it turned out, it was almost our own personal ferry - (we were joined by a sole cyclist on a LETJOG mission) - well worth £12 to get us and the car across for the excitement it generated. Within about 4 minutes of driving off the ferry, we're at the start of the 'climb'. In all honesty, there's probably more technical difficulty, height gained and route finding difficulties in strolling up Leith Walk. But to a 4 year old who's previously managed Arthur's Seat and a partial ascent of White Meldon and a wife who's compleated one munro thus far, let's be a little more inclusive.

What is impressive is the view to effort ratio. Looking over your shoulder as you stroll up through the first of the two fields you go through, the panorama back down the Cromarty Firth opens up nicely; complete with oil rigs, Cunard's 'Queen Elizabeth' and some other random P & O cruise liner docked at Invergordon, across to Ben Wyvis (some day soon, I think...) the corbetts of Strathconan and the munros of Glen Strathfarrar, it's a fine view. Nearer at hand, we had a herd of Highland cows and calves, peering over the fence at us, giving nature study opportunities to my urban dwelling sons. By the time we get into the 2nd and final field, number 1 son is already practicing his teenage angst and moaning about being tired. If it's the walk to the ice cream shop, we would not be having this drama....

Eventually, after what seems like an eternity, but was in fact about 20 minutes, we arrive at the summit. From the top, the view up the Easter Ross coast is mighty fine, and to the north, the RAF are practicing their bombing runs on the flat lands east of Tain and also the cruise liners at Invergordon are disappearing under a sheet of rain sweeping in of Ben Wyvis.... Time to turn and run. We made it back to the car about 3 minutes before the rain started hammering down. Just perfect. Then, the rest of the day was spent admiring the Nigg Stone, baulking at the prices at Anta http://www.anta.co.uk/ and basking in the piece and quiet of Tarbet Ness; a lovely spot stuck in the middle of the sea between Aberdeenshire and Sutherland; as Tom and I stood at the very last rock on Tarbet Ness, we could see three separate rain showers peppering the Sutherland coast, a further 2 were drifting along the Aberdeenshire coast. Whilst we enjoyed the pale sun in the middle.

The good news is the mother in law is coming to stay for a week at the end of the month, and I get a chance to get my munro count moving upwards again. So, all is not lost. (Just yet) 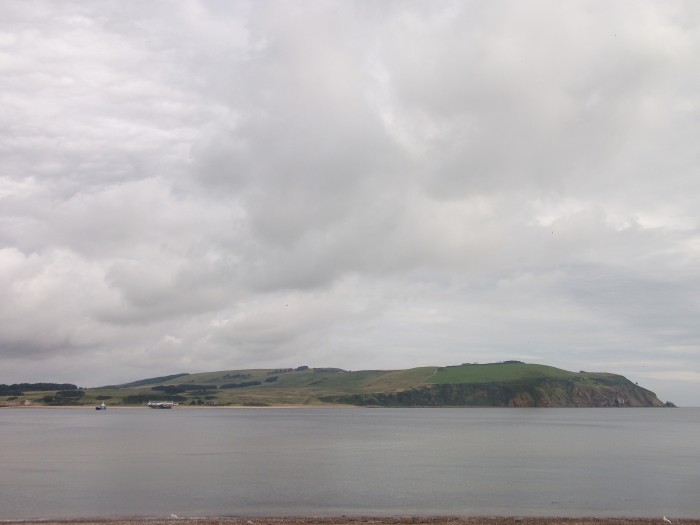 Nigg Hill as viewed from the foreshore at Cromarty as we had a picnic lunch.

View from Barbaraville on the north side of the Cromarty Firth View from the summit, looking down the Cromarty Firth View of Nigg Hill from the north side of the Black Isle, looking past Cromarty.

You've never offered to carry me up a classified in one of those things!!!!