Six months ago we booked a cottage near Crianlarich for the first week in September, hoping for balmy Indian summer weather for climbing some of those hills too far away to easily do in a day from Inverness. Well that was my hope as my better half doesn't share my OCD tendencies for getting to the top of hills and was just hoping for some good weather. He loves boats so I wanted to take him on a boat trip to Fingal's Cave which we've never done and for that we wouldn't be wanting strong westerly winds which the forecast was threatening.

It looked like the best day of our week was going to be the first day so I suggested the boat trip and he suggested doing a hill in case it would be my only chance.

He won. We agreed to do a hill

and decided on Beinn Ime via the path up to the Cobbler which I knew was a good path from doing Beinn Narnain. It was overcast as we started up the zigzag path which went on for longer than I remembered.

Arrochar from start of walk Pete and the dogs on zigzag path The Cobbler from the dam Being the weekend, a fine day, near Glasgow and en route to a popular hill it was incredibly busy. The only hill I remember being busier was Ben Nevis. But Glasgow folk are so friendly it was quite an enjoyable busyness and we had a few laughs along the way. We got chatting to Cath who has recently moved up from Yorkshire to Fife and is a member on WH (user name cathswalkies). We agreed to meet up some time for a hill or two. It had turned into a beautiful day with sparkling burn and heather at their glorious best.

It's a superb path making the climb so much easier. I got the dogs to pose but Tess (who has a bit of a rock fetish) refused to give up her rock. I try to discourage her from carrying them as it's bad for her teeth which are all worn down but she's from the working side and is only happy when she's 'working' so I've kind of given up on this one. Stepping stones provided at every crossing. The Narnain boulders where in the past climbers who couldn't afford afford accommodation would spend the night. Jack tried it for size but we decided we'd rather sleep in a tent! Beinn Ime from the bealach. The left hand bump is the top. It was while having something to eat at the bealach we met Jonny and his two girls heading up Narnain and it's so good to hear Ella got her first Munro! Beinn Ime from slopes of Narnain in October 2007 Since my better half is not wild about climbing hills my plan had been for us to go together as far as the bealach then he'd wander down slowly while I nipped up Beinn Ime to bag my 150th. As we sat on the rocks looking up I saw sheep near the top and quite near the path. While Tess ignores sheep I have to be careful with Jack (whose natural tendency is to chase anything with a pulse) so I suggested that Pete keep Jack with him while I went on with Tess. That was fine, Pete put Jack on the lead and I headed off with Tess.

Back of the Cobbler from Ime Parts of the path were water-logged and muddy from many feet and I felt relieved Pete wasn't coming any further. But I hadn't reckoned on the determination of my hard core munroist dog. When Pete made a move to head down the path Jack wasn't having any of it and absolutely refused to budge an inch except to follow me and Tess up the muddy slopes of Ime!

So Pete had no alternative than to climb to the top with Jack pulling him on the lead.

Lochs Arklet and Katrine from slopes of Ime The dogs hoping there might be something for them in there. 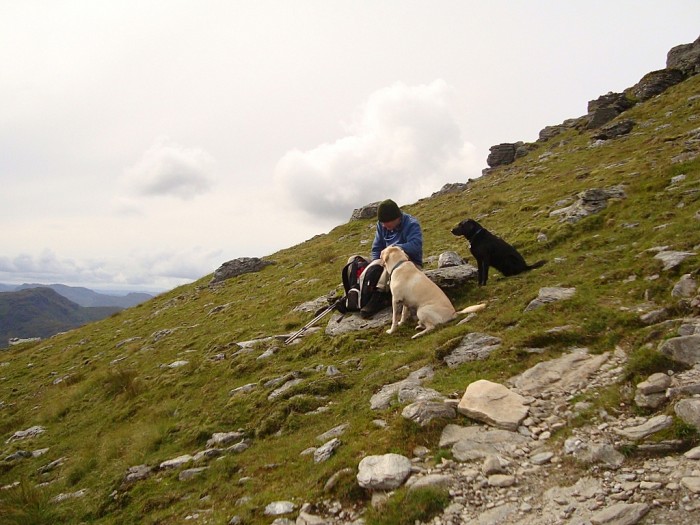 The windbreak at the summit was full of people eating which was a bit exciting for the dogs and brought out major moochiness so we didn't hang around for long. 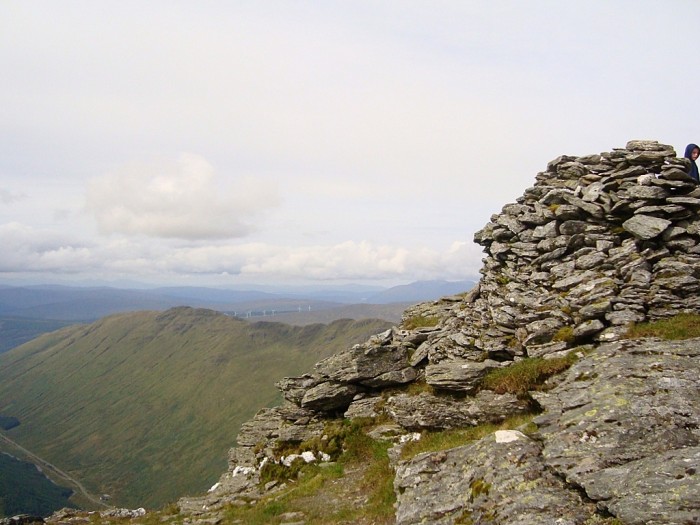 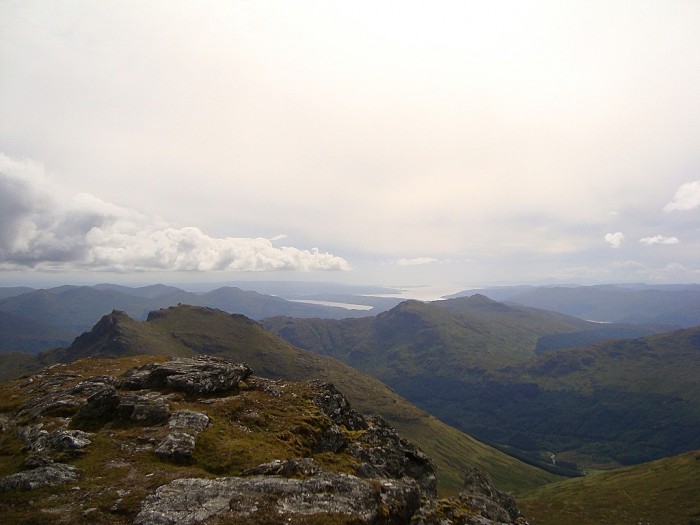 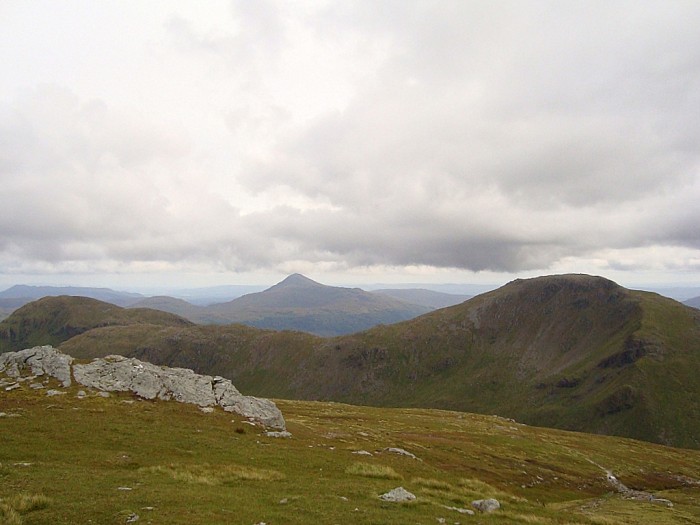 Arrochar from top of the zigzags on our way down. We had a fabulous day rounded off with good food at the 'Bonny Banks' on our way back to Crianlarich.

Enjoyed your report and pics - nice to see dogs having a good time. Many years ago I had a Golden Retriever that loved to carry stones around. He also knew where he wanted to go and where he didn't and would sit down and refuse to move, sometimes feigning injury until I turned to go back, then he'd be up and off back down the path.

Been asked to tag this as a Walkhighlands walk which I didn't originally do as it includes Narnain which we didn't do on this occasion. Is there a way I can delete name of hill not included?

Yes - edit then click on 'Click here to add or remove Munros climbed on this walk' and uncheck Narnain.

Okay done it now. It was obviously too late when I tried last night!

So that's what the views are like from Ime!!! 3 times I've been there and seen nothing, so thanks for sharing. Well done Jack for being determined to bag the Munro

Great report & pics. Nice to see what the world looks like from Ime. My time up there was in the clag.

just wonder how long it took to do, I quite fancy doing this walk myself

morag1 wrote:This looks like a great walk with nice pics to show for it

just wonder how long it took to do, I quite fancy doing this walk myself

You should definitely do this walk. It's a brilliant path as far as the bealach, some muddy sections on lower slopes of Ime then a good path towards the top. No difficulties at all.

My other half isn't a regular walker so we took it slowly up to the bealach (about two and a half hours) then under an hour to the top and quicker on the descent.

Try to go on a good day to get the views.

Sorry for the late reply Kathleen, only just noticed your message

Most of the Munros are a long distance from where I live, but I dont think Beinn Ime is too far so I might do this once the weather is better.

dogplodder wrote:Try to go on a good day to get the views

Will do, think I'll save it for the summer