Whilst having a look at the sub-2000 map on here, we discovered quite a few in the Banchory area. As we live nearby, we decided to head out as the weather was nice and climb one. We chose Cairn-mon-earn after reading ChrisW's walk report.

We turned off the A93 onto the A957 (Slug Road) and carried on towards the Durris mast. We went sailing past the turn off needed for the car park, but after realising our error, we headed back and found the car park. You need to turn off at the road signed Kirkton of Durris - 4. We parked up and set off through the gate. The sun was shining, but there was a bit of cloud coming in from the west, but nothing to worry about too much we thought. There were some nice views of the surrounding hills and we could see Clachnaben in the distance. 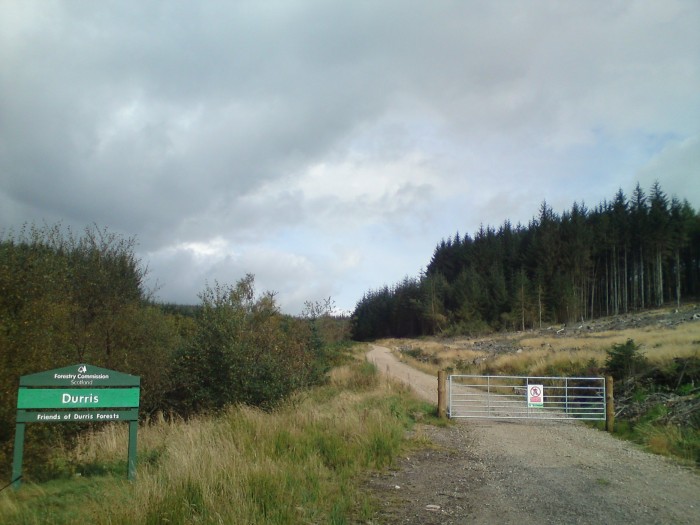 Start of the walk. 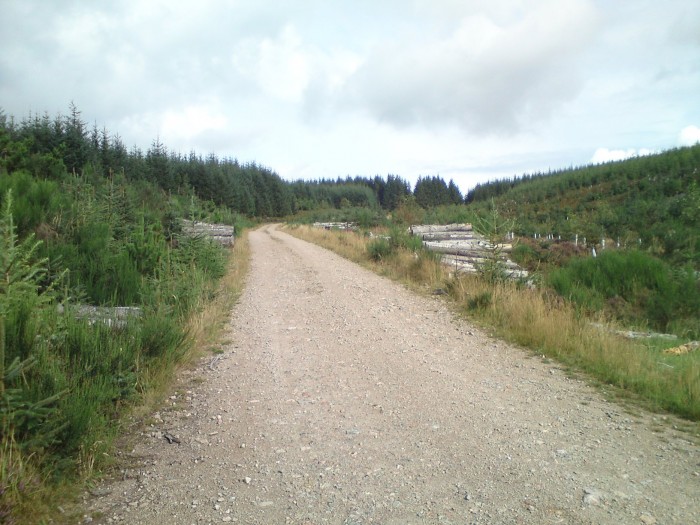 Heading along the path.

As we past a nice, small waterfall and wondered if this was the spot where the newt was seen when ChrisW came here, as mentioned in his report. We noticed that a lot of trees had been cut down here. Stacks of logs that have names spray painted on them lay next to the track to be picked up by lorries. Fortunately it looks like the Forestry Commision are in the process of replanting what they are taking, especially at the start of the walk. 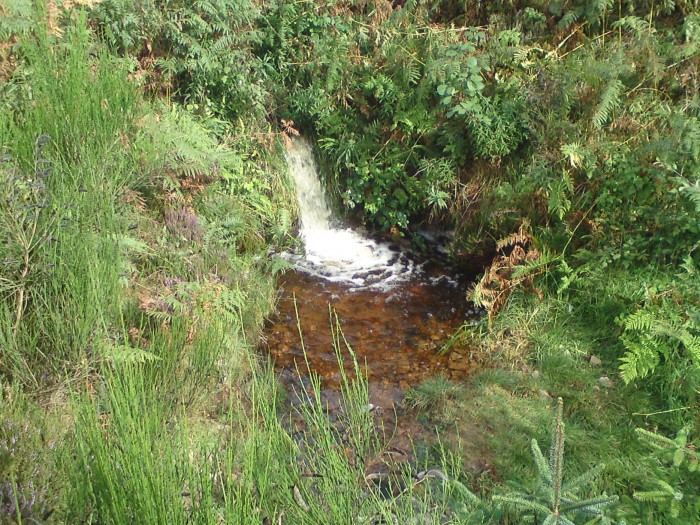 Is this where ChrisW saw the newt? We carried on along the well maintained path and came to an area of mass destruction. There were dead trees everywhere and it looked an eye-sore. We can only hope that they eventually reach this part and replant new trees as its quite a shame seeing so much forest being removed. We could make out a path at the top of the felled trees and judging by the map we had, worked out we would be on it a bit later. 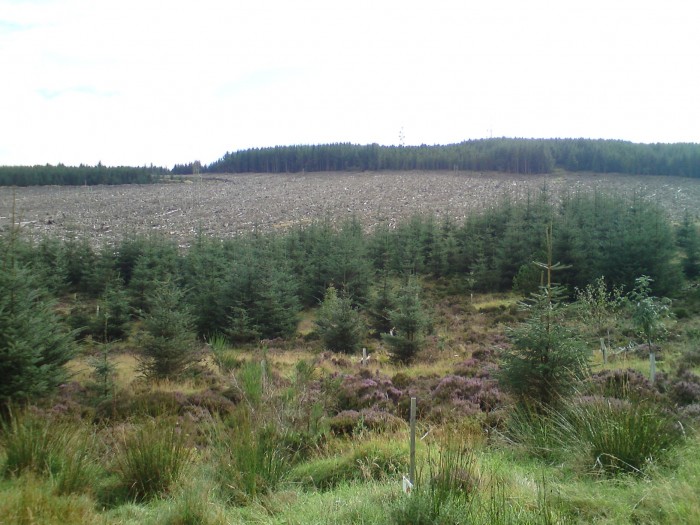 Felled trees and the path we took a bit later in the left hand top corner.

We reached a fork in the track and took the stonier of the two which is on the right. This took us into a dense forest. It was slightly humid in this section and as we breathed, we could see our breath which we found to be a bit odd. We wound our way up this part of the track and past lots of small streams and trees covered in green moss. It was really beautiful in this section. Eventually we reached a junction where a track turns off sharply to the right. We took this track which leads directly to the summit. Such great colours around. 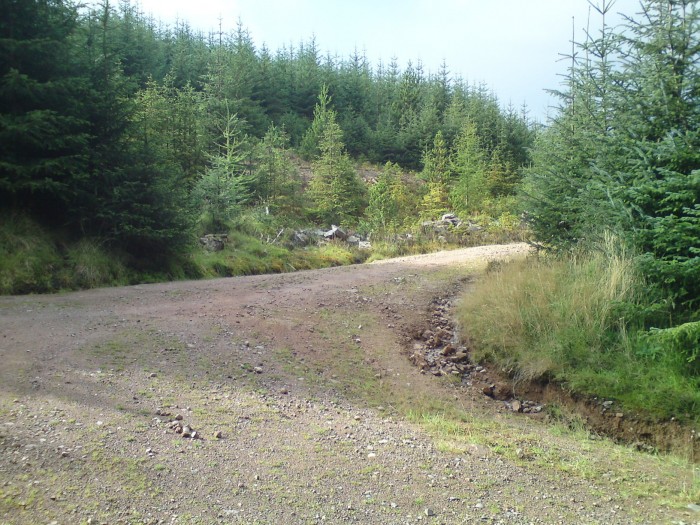 This is the turn off you need for the summit.

This path was wetter and muddier that the previous two tracks, but it wasn't too bad, and besides, it leads all the way to the summit. 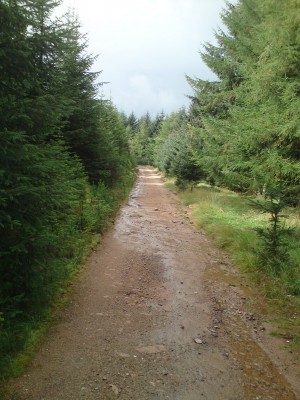 Off to the top we go.

We started to get views across Aberdeenshire now and we could also see the rain clouds gathering and hoped we wouldn't get caught in anything. We could see the high-rises of Aberdeen quite clearly as we made the final turn to the summit and were greeted by the sight of masts and aerials.

We made it to the top and found the trig point next to one of the masts. We climbed the stones to it and then made our way to the next cairn just a short stroll away where there is a delightful bench with a fantastic view. 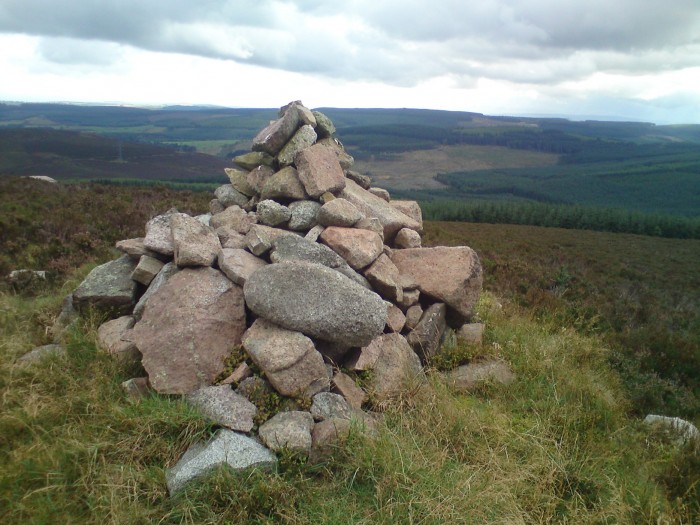 Smaller cairn next to a bench.

We sat down and admired the view. There was rain now in the distance and the hills were slowly disappearing into the grey cloud. Rick took out his camera and played with some settings on it to come up with this artistic creation of the farms in the area and the clouds added to the effect. Not bad for a mobile phone camera is it?

As we sat and watched the rain whilst eating chocolate we were startled by a very loud rumble of thunder. We didn't feel comfortable where we were, considering there were 6 aerials and masts behind us, so grabbed our bag and set off back to the track again. 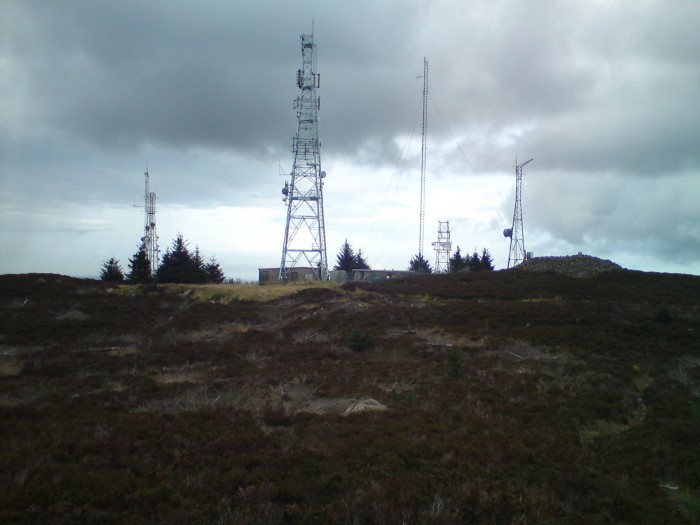 Not the best place to be when there is thunder around...

We walked very quickly past the masts and noticed the wind had stopped blowing. Not a good sign as the wind was what was keeping the rain away from Cairn-mon-earn. We made it to the dense forest track again and put on our jackets as some large raindrops were now falling. We were going to pur our overtrousers on, but the rain suddenly stopped so we thought we would carry on as it was going to miss where we were. Big mistake!!

We reached the felled area again and with no proper shelter around the heavens opened big time. The biggest raindrops we have ever seen were hitting us as fumbled around for our hoods on our jackets and put the waterproof cover on our rucksack. Within 30 seconds we were drenched. No point putting the overtrousers on now, so we trudged back to the car park. The rain came and went the whole way back, but it didn't dampen the enjoyment we had on this walk. It's well recommended if you just want an easy 2 hour walk with superb views.

I thought I recognised the name of the hill. I did a job there about fifteen years ago casting some bases for equipment cabins. It was in April and there was a massive blizzard on the last day of the job. Nice pictures.

Nice report there RicKamila, that is indeed the pond where that stick legged newt was lurking

that rain caught me and MrsW out today as well, we were on a wander by the river when it thundered and then hammered down around 3-4pm. Good excuse for a cosy hot shower though

ChrisW wrote:Nice report there RicKamila, that is indeed the pond where that stick legged newt was lurking

that rain caught me and MrsW out today as well, we were on a wander by the river when it thundered and then hammered down around 3-4pm. Good excuse for a cosy hot shower though

Yay, we were spot on with our pond!! No newts in the pond today unfortunately. Totally agree with the shower comment!!