I had a few hours to fill in while the "better half" and her friend toured Dumfries House.
Found the parking space at The Green Well of Scotland and set off up the track at about 12 noon. Weather was warm and sunny with clear skies. 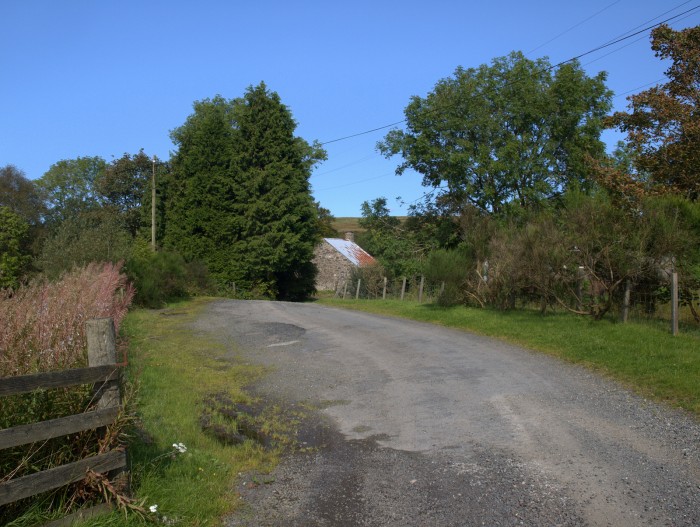 The bungalow beside the track was deserted which is a shame but onward passed the old bridge. The landrover track runs beside the Water of Deugh river for a while and glimpses of the hills to be ascended can be had. 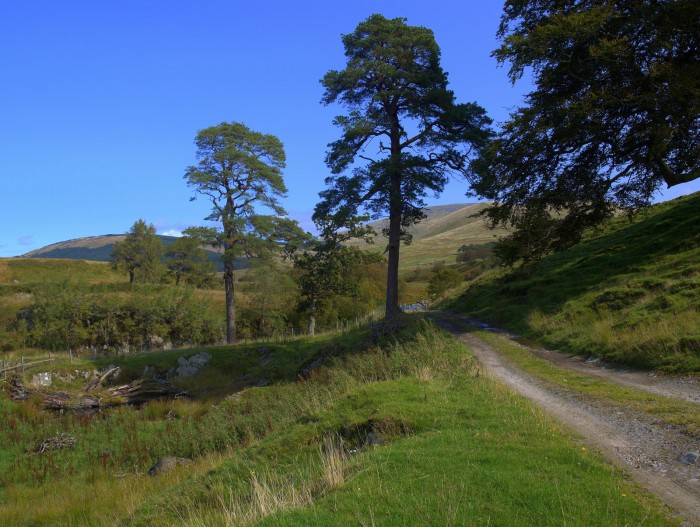 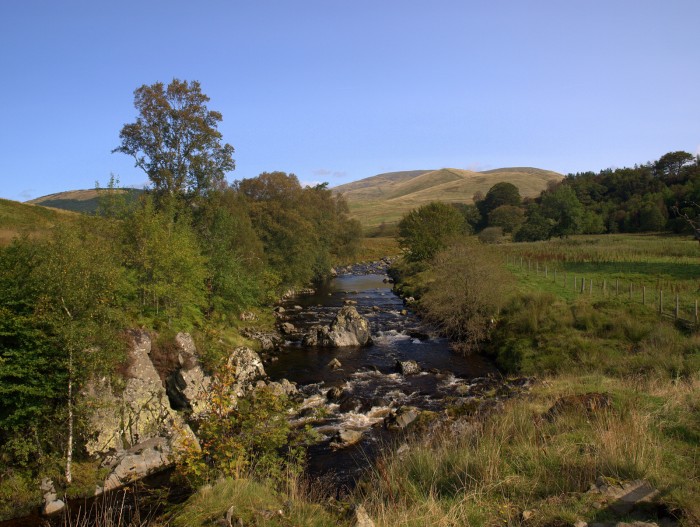 The River (Water of Deugh)

Passing through several gates it was soon time to head up to the first "top" of the day: Willieanna seen here to the left of the small plantation. 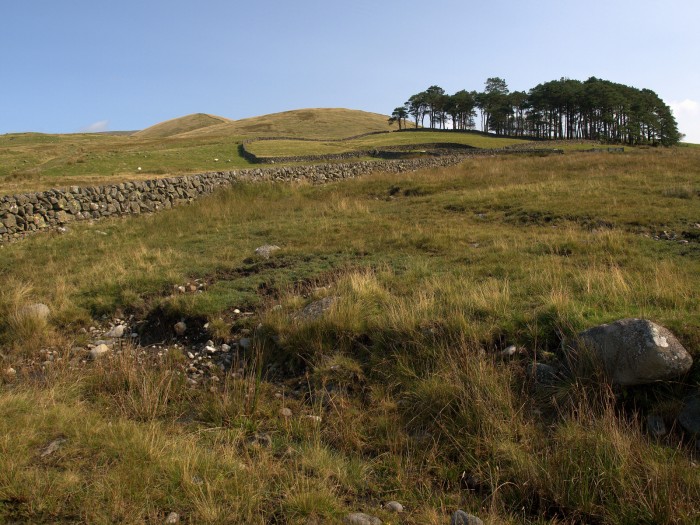 The ascent was straight forward up a grassy slope and the top afforded a good view of the route ahead to Dunool, Black Shoulder and ultimately Cairnsmore of Carsphairn itself. 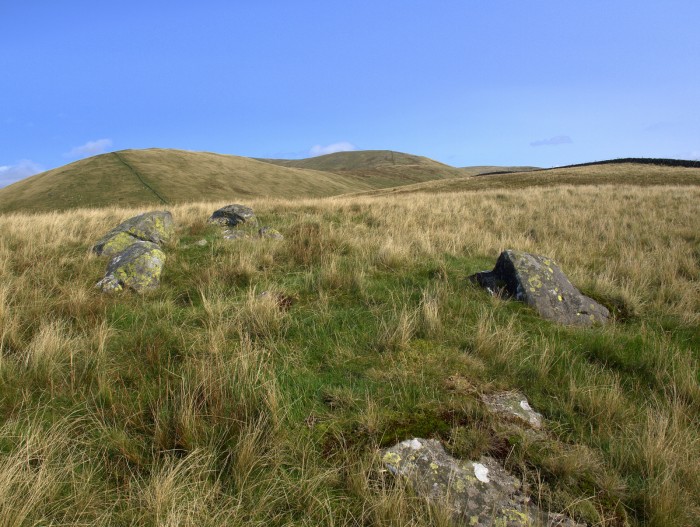 What was not that obvious from this point was the steep drop and even steeper climb up to Dunool; but it was from here!!! 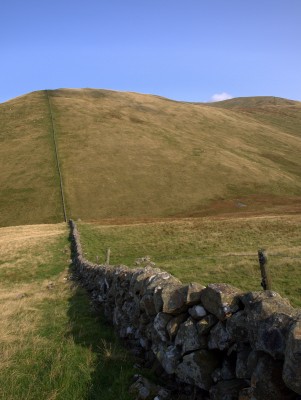 The soft, grassy and sometime boggy ascent of Dunool was hard work but the views made it all worth while. 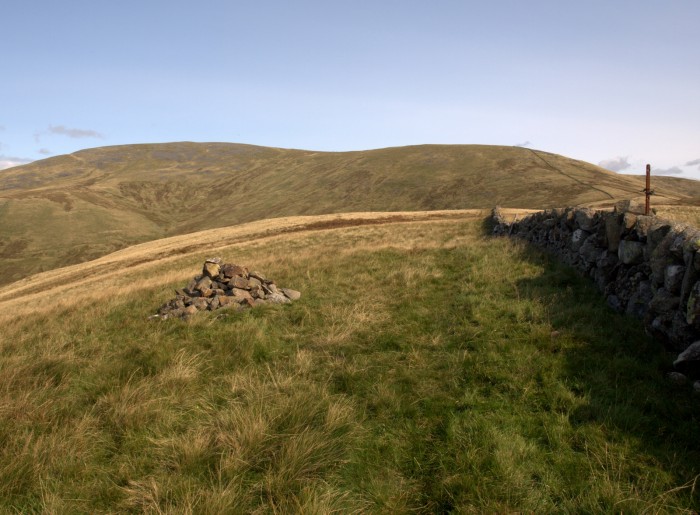 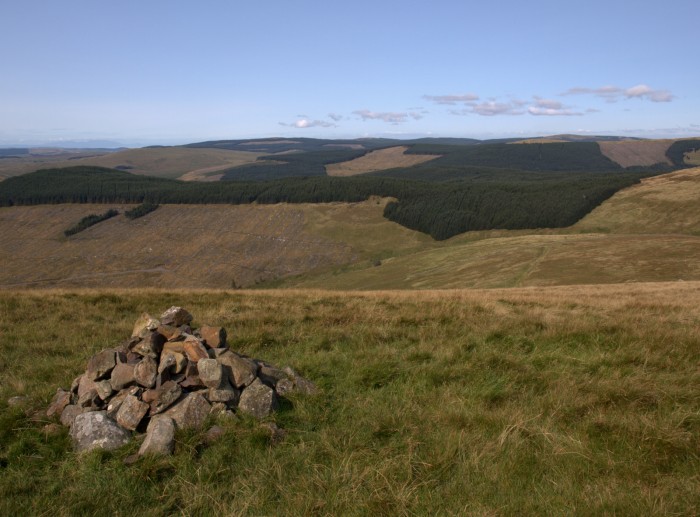 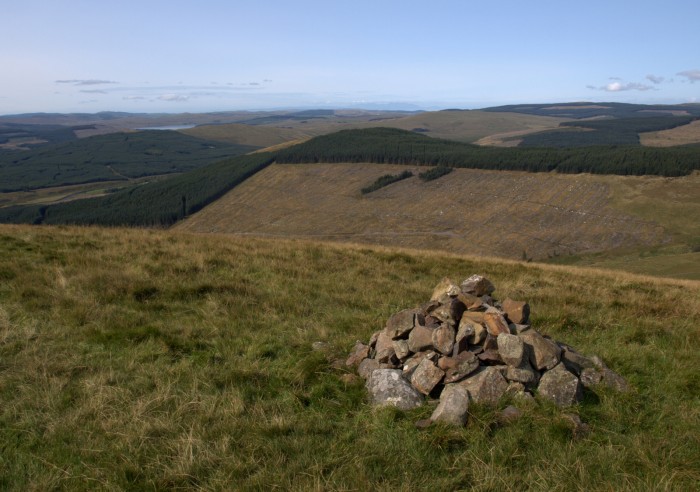 The route ahead was obvious so off I set conscious that time was of the essence. The going was easy, the views were excellent and I stopped to chat to a couple reversing my route. After a pleasant stroll over Black shoulder, a new fence has been erected, I arrived at the summit, and a nice summit it is too with a trig pillar in a shelter, a cairn and a small pool. But the views!!! 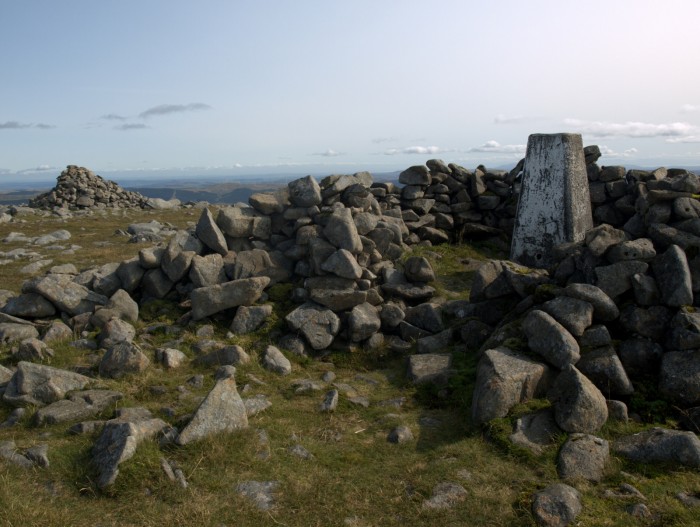 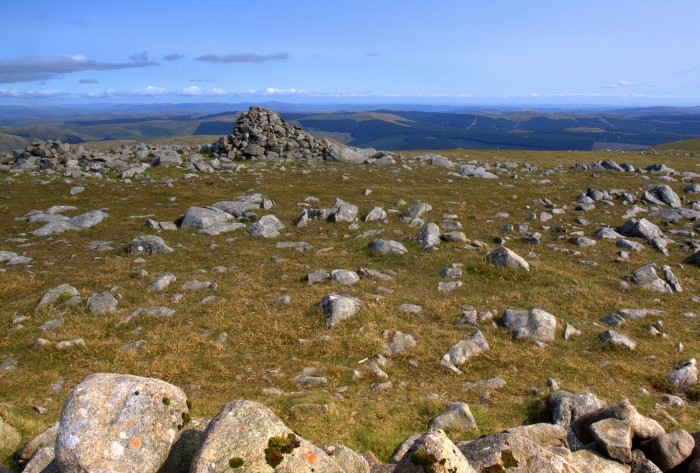 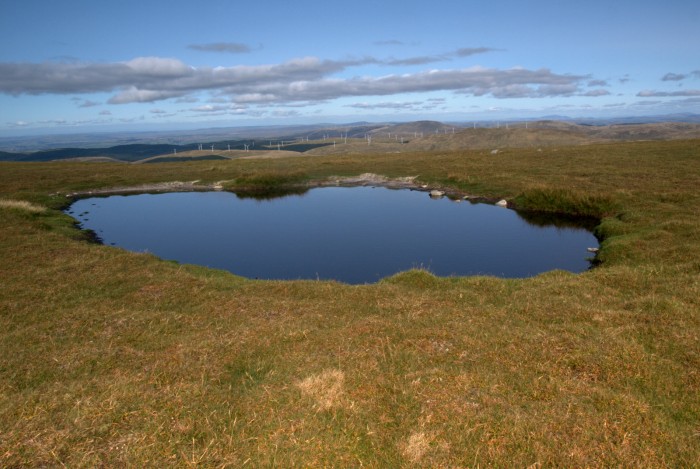 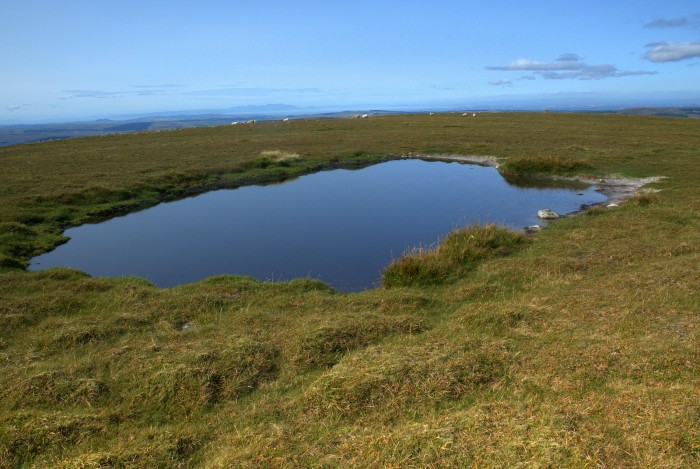 A distant Isle of Arran

Left the summit after a bite to eat and followed the wall down the south west ridge: before setting off make sure the wall is on your right as it saves having to climb it later.
The Polsue Burn is soon reached and crossed by a rather unattractive new bridge. 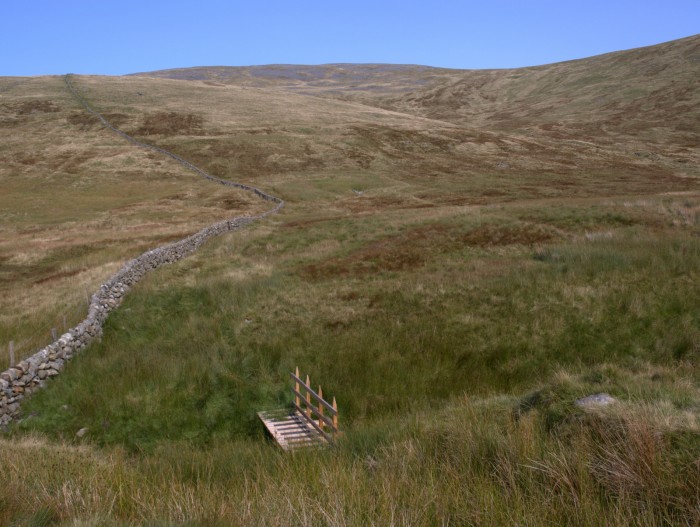 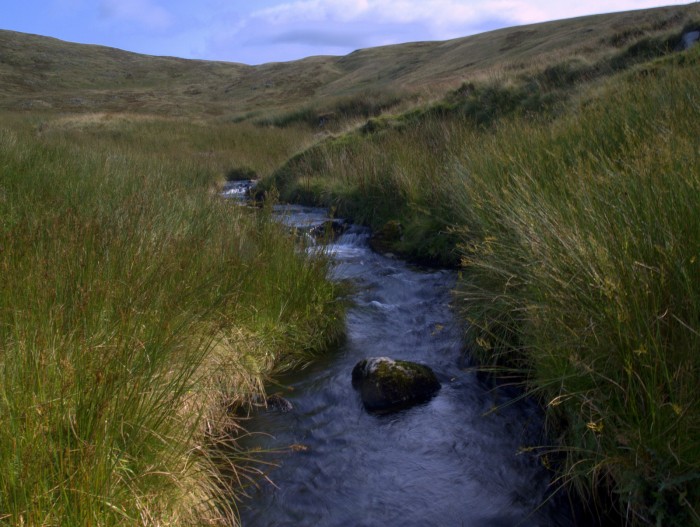 Polsue Burn from the bridge

I then headed for the end of the landrover track but went a bit too high so had to cross some rather boggy terrain: my advice is head right after the bridge by following the wall!!
Once on the track the return to the car is straight forward 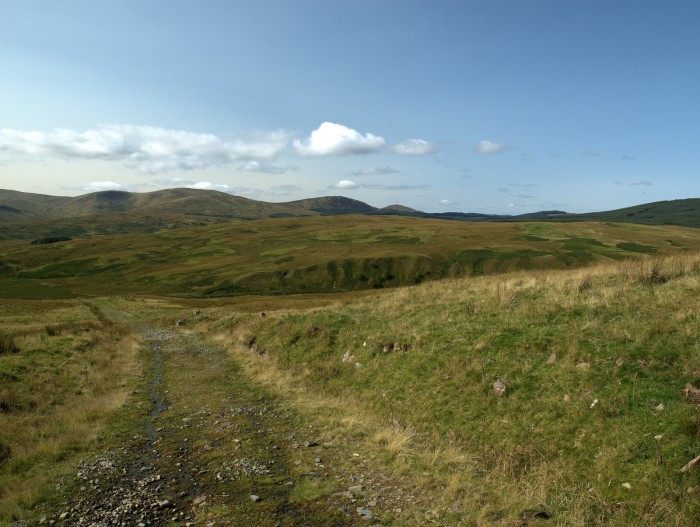 Back at the car and boots off, trainers on and back to Dumfries House to pick up "her who must be obeyed".
A cracking route which deserved more attention than the "rushed job" I gave it.
Perhaps I would have made a return by Beninnner and the hills to the east of Benloch Burn if I had more time.
There is always a next time!!!!

Did this and Windy Standard from the Water of Ken a few years back. Not bad weather but nothing like as good as this.

Have three plans in mind for my week off, next week

, this- combined with others, may be on the cards.
All weather dependant, hope for a couple of days similar to the one you had.
Cheers.

Thanks, it is a fine route.

Have three plans in mind for my week off, next week

, this- combined with others, may be on the cards.
All weather dependant, hope for a couple of days similar to the one you had.
Cheers.

If you get the weather do it, but take more time than I did.

Did this and Windy Standard from the Water of Ken a few years back. Not bad weather but nothing like as good as this.

Just lucky really. If I had had time to extend the walk I would have returned via the east of Benloch Burn