After Katia the ex hurricane

After Katia the ex hurricane


Friends & I were staying at a self catering cottage at Kingussie. The weather had proved not to be brilliant with strong winds and more rain than you could shake a stick at. The first sign of good weather and the rucksacks were packed the night before.

We arrived at Aberarder full of high spirits. We had all agreed to do Creag Meagaidh first and descend from Cairn Liath.
The blue sky was something we hadn't seen for ages and was much appreciated. We walked up the path in anticipation of what lay ahead. First sight of the window.

Lunch was had by the Lochan before the steep climb into the window.
You could definately tell that the crags were suitable for climbing when iced up. After a lunch we were ready for a steep climb. Starting to climb up into the window

It was a welcome relief to get to the top. View back down from "The Window"

There are worn paths around the back of the window. Paths worn around the back of the window

We set off up Creag Meagaidh & I warned my friends about Mad Megs Cairn which we visited after the summit. Friends arriving at the summit. You can see why there are navigational challenges in bad weather

It was far too nice to go down and we had intended from the offset to complete the circuit. Second Munro of the day beckons across the window.

Once we got up to our second munro fence posts appeared - and the boys disappeared! Fence posts across the plateau 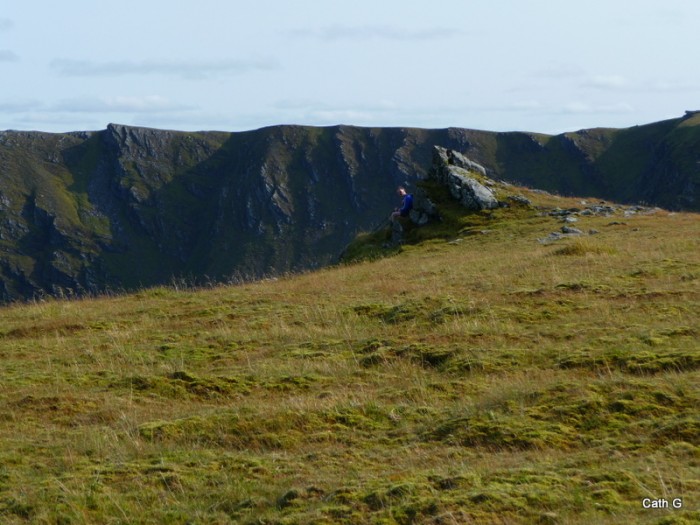 After a good high level walk with one or two noticeable dips we arrived at Cairn Liath. We descended and eventually found the path. It was boggy in places due to copious amounts of rain during the previous days. The trees proved to be quite dense. The path through the trees.

I didn't spot the little path on our way up as it was overgrown with bracken. I removed a little from around the cairn to make it visible. The bracken makes the start of the path very difficult to spot.

We descended down as the sun was setting. That's a great shot of the lochan and cliffs. Glad you got a good day for it after the weather we've had.

Congratulations on reaching the 100 mark. Good hill to reach it on.
Glad to see there is a cairn marking the start of the path incase anyone does this in an anticlockwise direction.

Congrats on the big 100!!! Looks like you picked a good walk for the occasion