Stayed overnight in Braemar after climbing Lochnagar the previous day. Arrived at the car park at the head of Glen Tanar and set off about 9.30am. I had brought my bike with me and cycled for the first 10km. It was dry for the first ten minutes then had to put the waterproofs on. Going through the woods I came across a large vechile which I was to pass on the way back pulling a roller which was flattening the track. Further up the track there is a hut called the Half Way Hut. Would be interesting to know where it is half way too. After cycling for about 6km through the woods, you come out into the open glen and I got hit by the rain. At this stage it was not too heavy though by the time I reached the path that leads you up to the summit it was pouring down. Decided to have some food at this point before I began the climb proper,as the cloud base was about 650m and it did not look very friendly up high. After food I set off up the track then followed the well worn path to the summit. Took a quick photo, touched the summit cairn then beat a hasty retreat as the wind was gale force coming from the south. 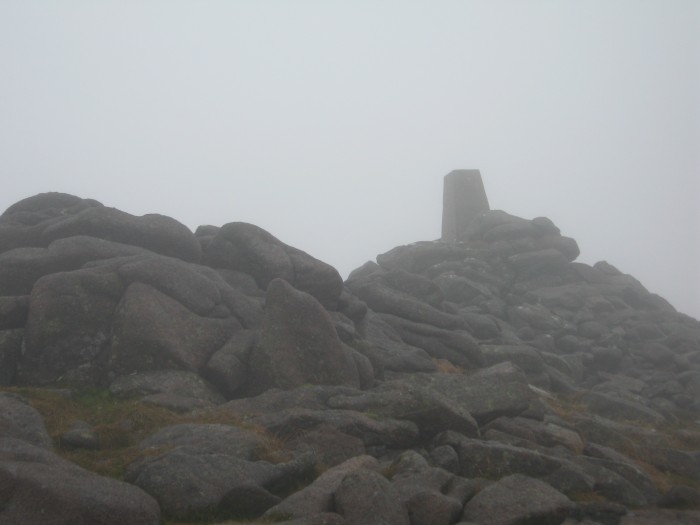 Headed back down and passed three ladies heading to the summit and we were all soaking. This is the road back, taken just below the cloud base. Got back to bike and another quick bite to eat before cycling back to the car. It was quicker cycling out because it is downhill all the way which took about 40minutes compared to the 90 minutes it took me to cycle in.
When ticking off the Munros you have to accept the bad days as well as the good ones.