Well, having done Alligin the previous day and the Liathach traverse planned for later in the week, we thought we'd be a bit more sedate today. Lucy was certainly looking for a walk that didn't involve the indignity of being manhandled over any scary Horns

The review of Fionn Bheinn on here refers to it as being "the forgotten hill of the area". Maybe not too surprising when you consider the competition on the doorstep, but as I always say, there's no such thing as a bad hill - only degrees of goodness. It's got to be worth a few hours of our lives.

We drove the short distance from our HQ in Kinlochewe to Achnasheen and parked in the little village green type area complete with craft shop, back of beyond style train station and duck pond. I had only realised that morning that of the three OS maps we had brought up with us, Fionn Bheinn wasn't actually on any of them - it was just on the very bottom corner of a neighbouring one which we didn't have! Oh well, never mind, we had the print off from here and the compass and it seemed pretty straightforward. Up onto the main road and it literally is no distance at all until a track on the other side leads over a cattle grid and past some sheds, outbuildings and general farming hardware lying around making the place look untidy. It's not the most scenic of starts to a walk and kind of reminds me a bit of the east Ayrshire moors around Muirkirk where I used to go for long walks with my grandfather when I was a little boy in the summer holidays

After the rather untidy start, things soon become a bit more picturesque as a clear but in places quite boggy path develops along the eastern side of the Allt Achadh na Sine. In places it climbs quite high above the burn and the drop is quite precipitous. At one point I realised that although it looked like there was a good couple of feet of ground between me and the drop, it was mostly just overhang and if I looked closely I could see through the grass to thin air below

The going was really quite hard at this stage and it was a lot steeper than it had appeared from the road. It was also really quite clammy and frequent liquid stops were required. Eventually, after about an hour, the terrain flattens off a bit just beyond a series of nice pools and little waterfalls in the stream, where we stopped and had a brew up and a choccy biscuit (and as ever, Lucy pranced merrily about in the water The terrain becomes quite flat and featureless now, with heather and peat hags stretching ahead between the slopes of Meall Chaorainn to the left and the shoulder of Creagan na Laogh to the right with Fionn Bheinn itself just beyond. Rather than heading up the shoulder, we continued on what looked like a more direct line. The first bit was a little tricky and took a bit of time while we picked a safe path through the bogs and hags. The ground eventually firmed up as the gradient steepened and although this was now becoming a real thankless slog, things were enlivened by views opening up of the Torridon giants in the distance. There is not as much as the faintest sniff of a path here, but we could see what looked like a group of 3 or maybe 4 people ahead approaching the ridge. We soon gained the ridge ourselves with a fair bit of relief and at this point, Fionn Bheinn begins to become worth the slog. The views down the crags into Toll Mor and across Loch Fannich to the main mass of the Fannich range are fantastic, and in total contrast to the ascent side from Achnasheen. The summit trig point is now clearly visible a short distance up the ridge to the left - and there is even a path At the summit the place is absolutely hoaching - I've never seen so many people at the top of a mountain. Alligin yesterday was like Marks & Spencer on Christmas Day compared to this!

In addition to the three guys who were just ahead of us, there is a big group of about 10 enjoying lunch and we are soon joined by another couple. For an unheralded hill and a fairly monotonous slog of an ascent, the views from here are amazing, over the Fannichs, the mountains of Torridon and up to Slioch and beyond into the wilderness of the Letterewe and Fisherfield Forests. We enjoyed a good hour or so just sitting here having a leisurely lunch and admiring the panorama. 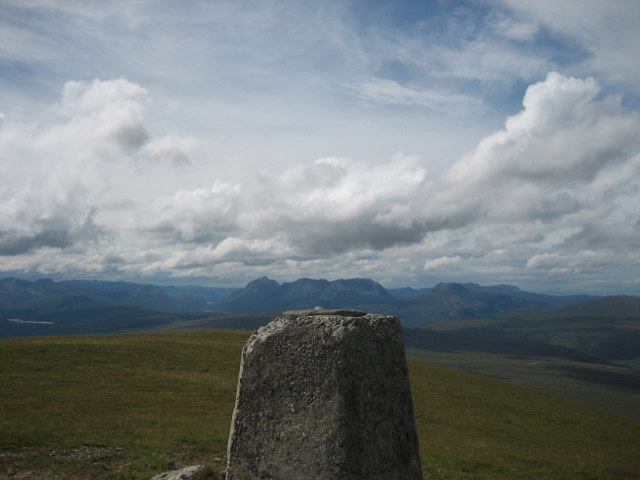 "Thank goodness there are no Horns on this one!"

On the descent we stayed on the ridge all the way along to the little cairn on Creagan na Laogh mentioned in the route description and then headed down the shoulder to pick up the path by our earlier tea stop spot. This is definitely a lot less boggy and peaty than our ascent route, and a good deal quicker into the bargain. We were down from summit to car in just over 90 minutes.

I'd say that for a change to the usual scrambling to be had on some of the hills around here, and for cracking views, this is definitely worth a pop. I'd just hate to slog up here and then find it starts to clag in just as you get to the summit!

Fionn Bheinn...one of the first hills I done after heading to Torridon and on getting to Achnasheen saw that the weather looked miserable in the Torridon direction so opted for this hill as it was still in sunshine and like you was pleasantly surprised at the views to the Fannaichs and as luck would have it ...I could also see the whole Torridon/Fisherfield range.Hoping to do it again as a winter walk. Good pics. mountainman.

Totally agree with the report - a nice wee day out and in good weather provides great views.
In wet weather, the boggy plateau before the rise to the summit is a nightmare and is best avoided by keeping to the right.

This was my second munro many years ago. We took exactly the same route as yourself, although there wasnt a path at any point on the route then. Very very boggy, very claggy. Didnt see a thing... Almost put me off doing any more.
Nice to see the photos from the top.