Wet & Wild in the Cairngorms

Wet & Wild in the Cairngorms

our_route.gpx Open full screen  NB: Walkhighlands is not responsible for the accuracy of gpx files in users posts
With my last outing being the 'meet up' in Kintail where i was seriously under par walking wise i had this day set aside for a walk in the cairngorms,come rain or shine i was going to go and a check on the weather the night before confirmmed it would be rain but un-deterred i awoke at 4am and after getting ready set off for the car park near Feshie Bridge

I arrived about half six and my fears over the weather were soon realised,stepping out of my van i nearly got blown over and it was raining fairly heavily,at this point i realistically knew i wouldnt complete the four munro's as i expected the weather to get worse the higher up i got.
Off i set along the road to the farm and then onto the path along the hillside which goes through a forest area and upon emerging from the trees i could see the path all the way up to 1000m which was easy enough going with the path restoration in full swing.As i reached 1000m odd i took note of a cairn which marked the path out toward Sgor Gaoith which i duly followed,up and over Carn Ban Mor before a gentle pull up to the summit of the first munro in just under 2hrs.i will add in that the walk out to Sgor Gaoith i had the strong,gusting wind at my back which was certainly easier going than when i headed back over Carn Ban Mor,every step felt tougher as i walked into the driving rain and wind but i carried on toward my second target of the day,Mullach Clach a'Bhlair.
On the way i managed to take a slight detour and ended up too far west of the path which i quickly corrected and was on my way again and picked up a great track which would lead most of the way to the second munro.About 1km after i joined the track a small cairn marked the path up to the summit.
Standing on the summit was wild,the rain was heavy and the winds were strong but in my madness i chose to have a bite to eat and refuel for the walk back to the van which i roughly esitmated was nearly 12km.Again i followed the track and this time cut off in a western direction down toward Meall nan Sleac where i had the option of cutting some time and distance off by going over the hill and joing the path back to the farm much further on but i opted for staying on the track and i reckon it was well worth it.
The track leads down to Glen Feshie and the river Feshie and i have to say its such a nice area and certainly one of the nicest glens i have been in,as i followed the track by the river i wasnt sure if the weather was helping me like the area more,yes sunshine is always good but there is something special about being out in these kind of conditions that i especially like,it feels more raw and typically scottish,which was backed up by a 20 minute hailstorm as i sauntered by the river
The track soon becomes a path if you stay by the river and it was very boggy with alot of bike tyre tracks and i stayed on it for most of the way before cutting back up into the woods before the river crossing which as per usual i just waded through rather than spend time looking for a 'dry' crossing point
From the river crossing it was a pleasant walk back to the van and just as i neared the car park the cloud started to clear and the sun made an appearance,typical!!
Stats for the day were- 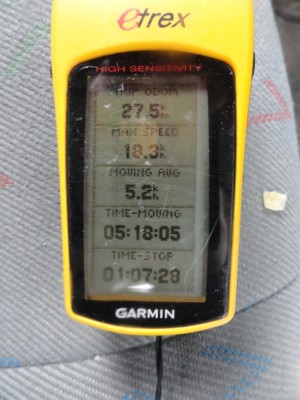 It may have been crazy weather but this is up there with some of my favourite walks,partly due to the extreme weather and almost certainly due to the walk out in Glen Feshie which is usually the worst part of my day.

i opted for a short video of the day rather than spending time uploading my pics as usual,enjoy!
http://youtu.be/R58crT-svVE

Good to hear that there are paths and tracks for a good part of the walk.

Pity about the weather but remember its fabulous for the complexion

Good report Ian. I think i would have got back in the van with the description you gave of the weather

Been through some not so nice weather many times but now looking for a bit of sunshine. Nice to see the clear paths. Good effort.

Yeh, thanks for your report Iain. Hoping to follow in your footsteps very soon.....interesting to know that this was one of your most favourite walks. Been in Glen Feshie a couple of times years ago, but not up to these summits. It will be fun to return, cheers for now...