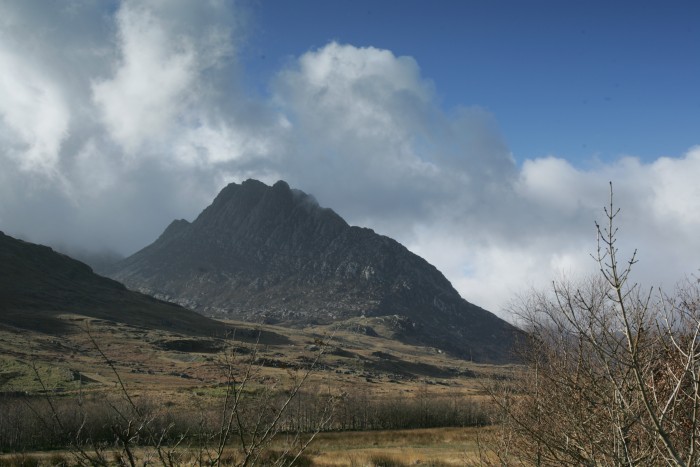 After a year of inactivity due to moving house, decorating, etc, etc, I finally managed to arrange a weekend away in Snowdonia!!
Myself and my 2 sons Rob and Nick made the 8 hour journey on the Friday (2hrs on the M25) and got to our “Bunkhouse” in Capel Curig at 11pm only to find that it was an old stable with a few pieces of foam rubber on a wooden loft!

We brushed the mouse droppings from the mattresses and had a couple of hours sleep before loading up the car and doing a runner.

The Swallow Falls hotel had a cancellation and we were able to book in for the Saturday night. Phew!!
I have since discovered that Walk Highlands had a meet at the very same hotel on the same weekend. That is how out of touch I have been. Sorry i missed you guys I hope to join you on a walk soon.

Anyway the Saturday was a bit damp so our intended climb of Tryfan was postponed until Sunday. Instead, we decided on Moel Siabod but aborted early due to the weather. Spent the afternoon in the Slate museum, a copper mine and the pub!

Sunday looked more promising and we were off to Tryfan. 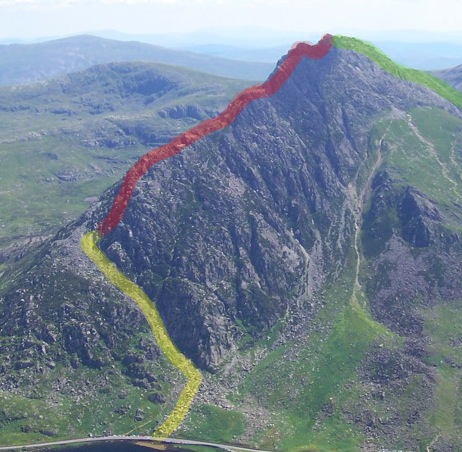 After the first steep slog we had gained quite a lot of height already, the path getting steeper and the boulders getting bigger until we reached the scramble. 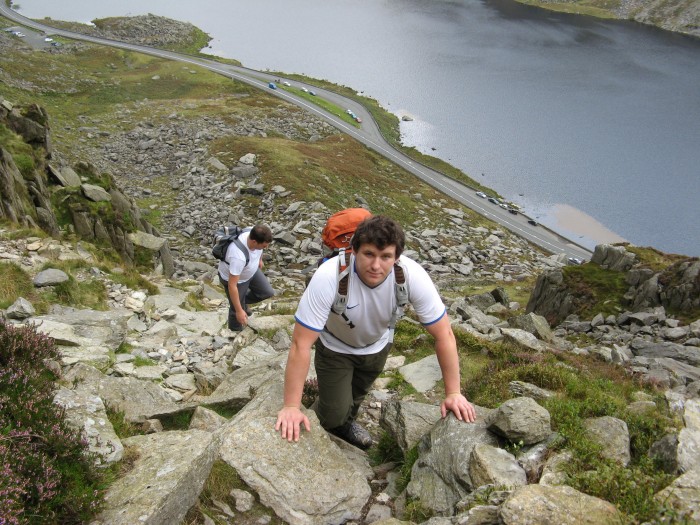 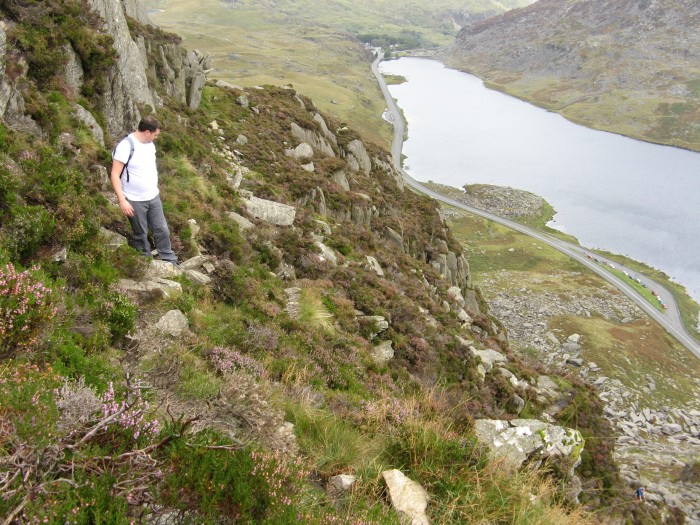 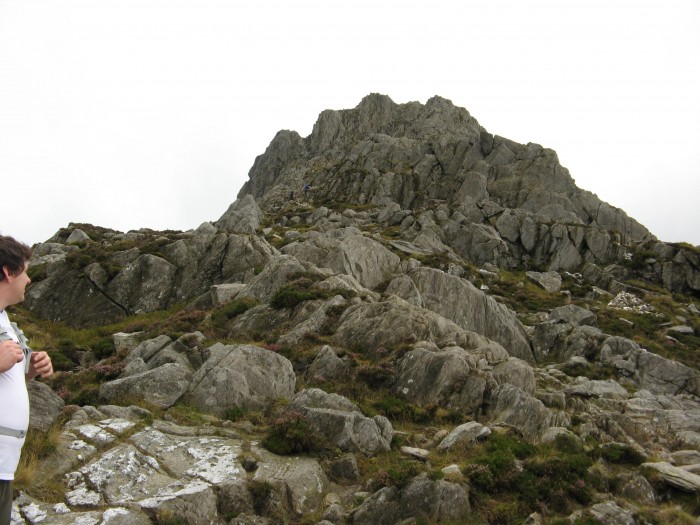 Initially we veered off too much to the west and things got a bit steep for my liking so we moved around towards the east face and found an easier way forward. My son Nick continued meeting us later and confirmed that it had been a bit hairy that way. 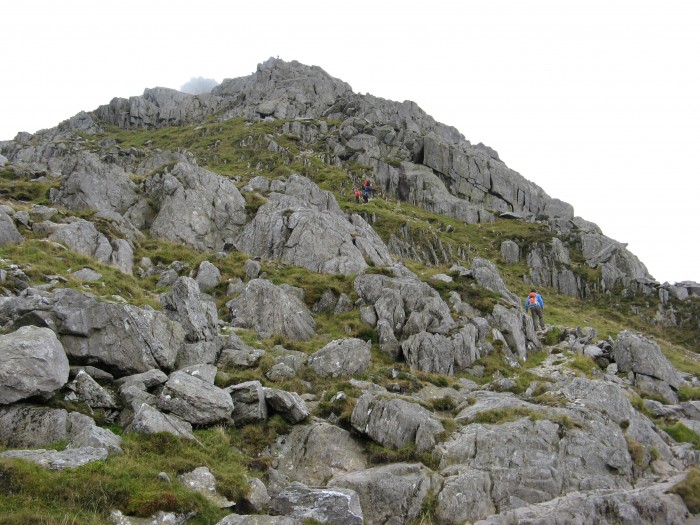 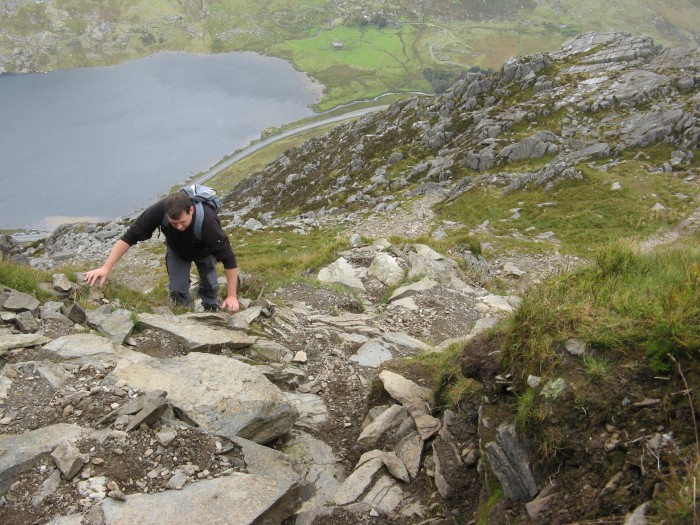 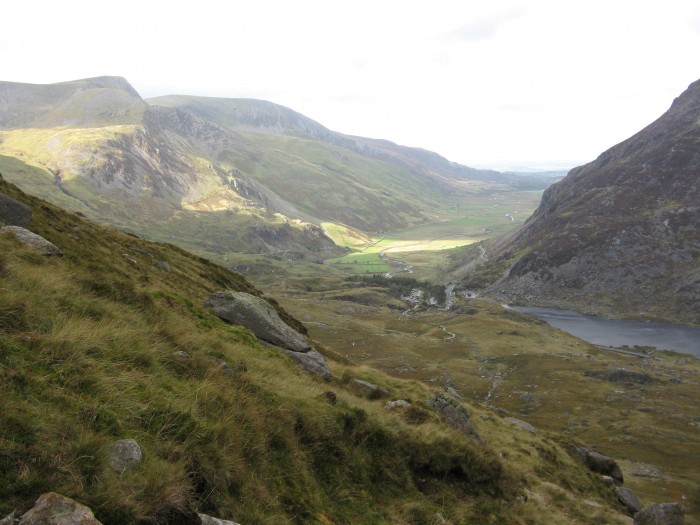 Nothing prepares you for what comes next. OMG….How the hell are we going to get up there! 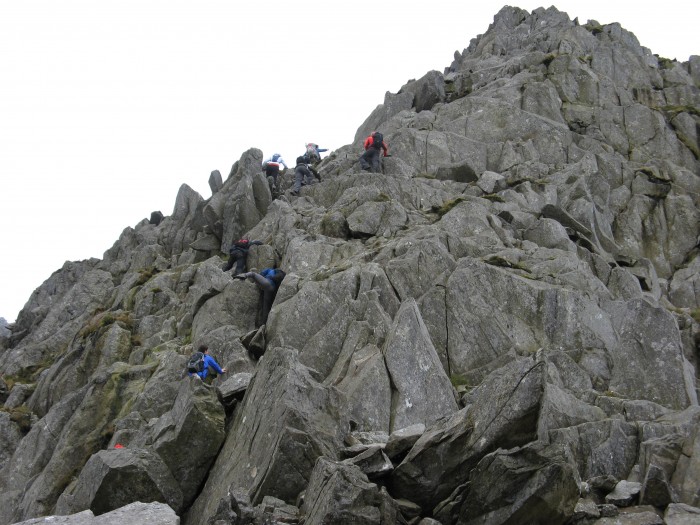 The climbing now was very “hands on” with a few stretches. Photo 7 shows one of these with the guy’s leg up around his ear. There seemed like no other way than to kick your left leg up onto the top of the boulder and roll yourself on to the top. Probably not a good technique, certainly not a pretty sight but it worked for us!
Soon we came across a small group with a teenager looking terrified and clinging onto the rock. After some encouragement from his leader he moved forward and we saw him later at the top. 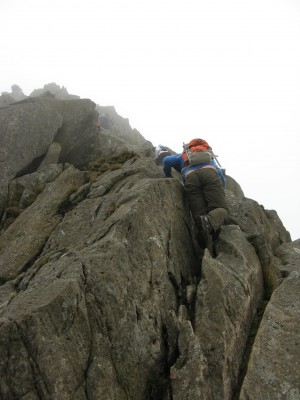 The longer we climbed the more confident we became with good hand holds all the way up we were soon at the first peak just as the clouds came over!
From here the only way was up, we had passed the point of no return !!
The wind had been gusting quite strongly and we were having to time our moves between gusts. The young girl with the red backpack was blown 4 steps backwards at one stage so we were clinging close to the rock when the wind blew! 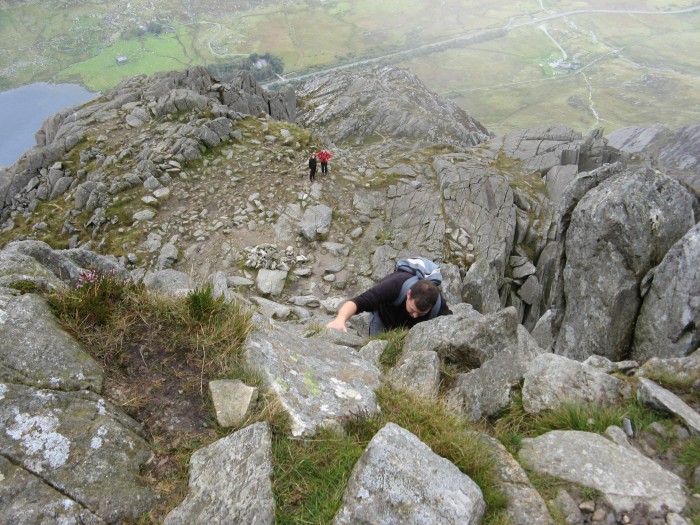 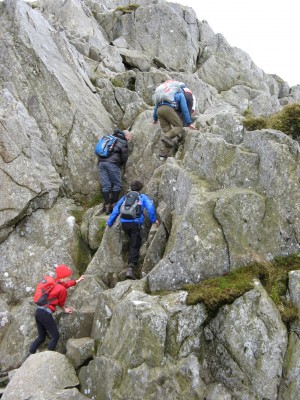 Then the end was in sight. It looked amazing but impossible at first. The closer we got, the clearer it was to see the way forward and it was not too bad at all. 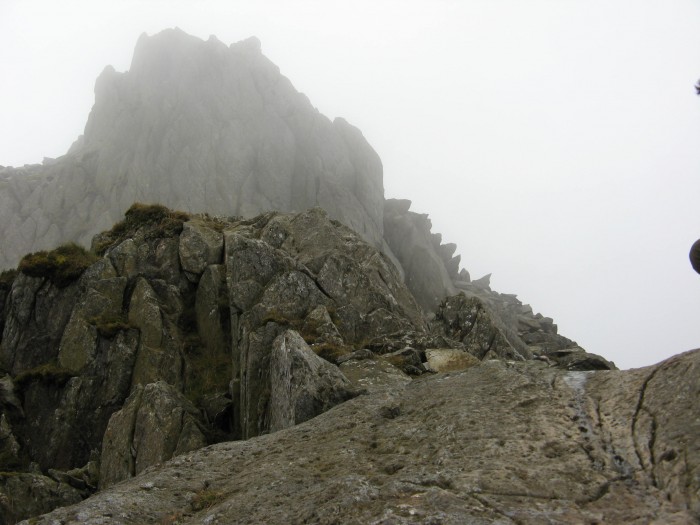 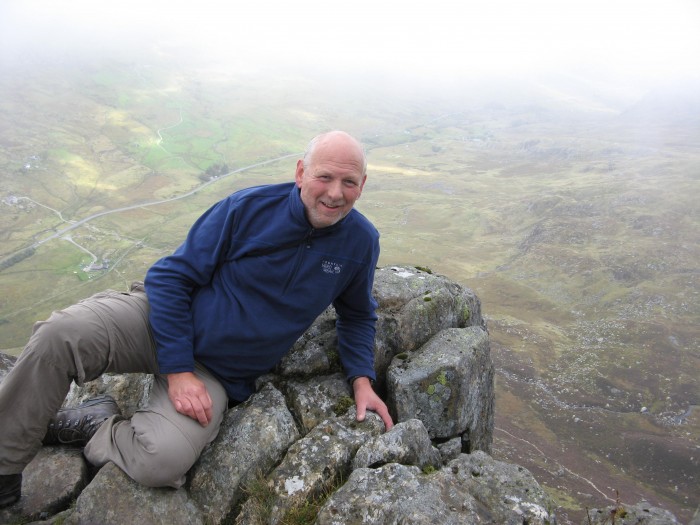 Pic 14 shows a group coming up from the East face (mad people!) 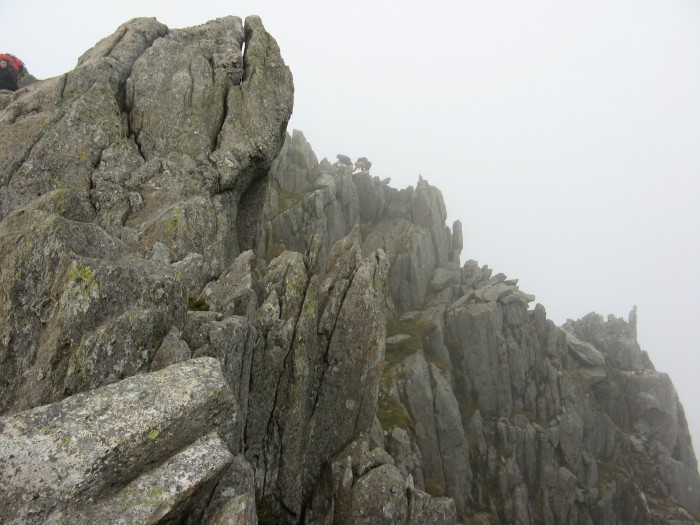 After a brief introduction to Adam and Eve we made our way down the south ridge and back around the west face of the mountain and back to the car. 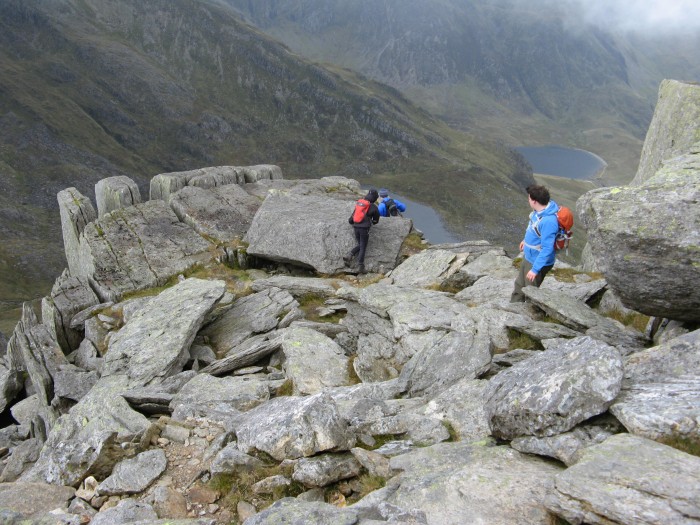 On the way down the South ridge Rob treated us to a bit of a laugh. As he was walking down the soggy grass hill he went from vertical to horizontal in one movement then proceeded to slide down the mountain a further 2 feet in the brown water

Had to be seen to appreciate it. Nick and I appreciated it thanks Rob!

After a microwaved chicken and bacon pannini at the Idwal cottage café (yuk) it was time to start the 6 hour drive back back to sunny West Sussex!!!

Apparently it had been sunny all over the country that weekend apart from North Wales!!

All in all a great day out. Thanks for reading

Re: The beast they call "Tryfan"

Great stuff, John - as clear an account (and pics) as I've ever seen of what the North Ridge is really like...