Did the Ben Vorlich 2 at Loch Earn last Saturday & the paths were fairly busy, even a queue for the scramble. These 2 aren't as popular but the've got their own character. Might not have been as much fun if it had been raining all week & the ground was boggier though!

Got to Auchessan just after 9 & parked on grass verge facing Crianlarich, when I got back others were parked in front of me so couldn't see oncoming traffic too well when pulling out(!). Started off road to farm about 9:30 Went past all white buildings & barn on right - half a dozen dogs ran out of the barn to say hello/bark insanely. Were called back by voice from barn. Then through a couple of gates to the fence round woodland area. They've marked the paths with white discs showing footprints. Bit muddy on the route between fence & burn but not too bad, there had been a couple of dry days before. Looking back down you get a view of Ben More - handy to remember where the start/finish point is relative to this as the route is often pathless. 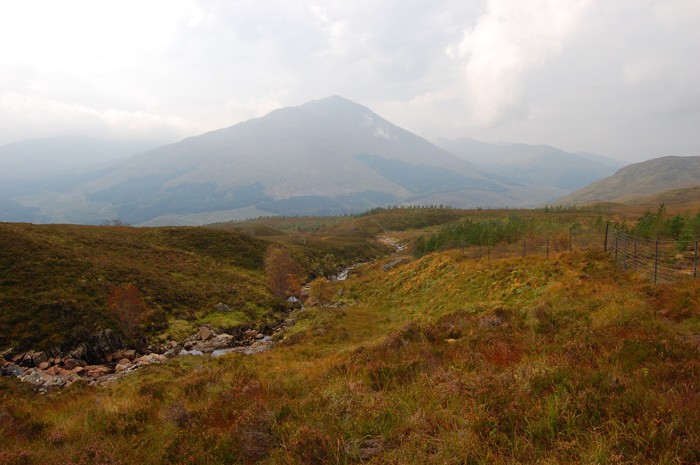 Eventually got to end of fenced woodland and the path petered out, but followed the burn till the sleeper bridge & dam were reached. Took compass bearing from dam & headed up towards the crags. 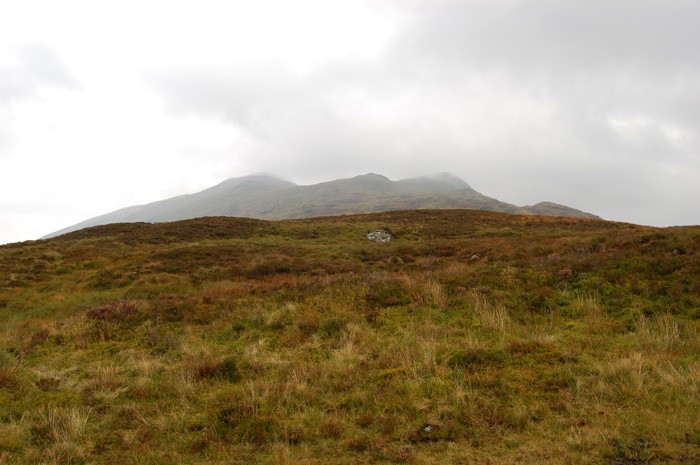 For most of this route I was the only person on the hills (with a couple of deer for company) so I was glad I've started using walking poles since you get extra grip on boggy ground and steep descents on grass. Further up you get a better look at the crags, headed straight for them and it's easy to walk around to the peak. There are a few stalker's paths on these hills but they seem to bypass the summits. The cairn is just behind the crags - one down, but still the descent/climb to Beinn Cheathaich to come. The grass is very steep on the descent so poles came in handy, at the bottom there's more boggy ground to cover before heading upwards. Couldn't find a path so it was straight across to the ridge at the north side, there was a faint path once I was heading upwards. Then on to the cairn - wind picking up by now. From here it's an easy ridge walk to Meall Glas, met 4 guys coming from the summit . 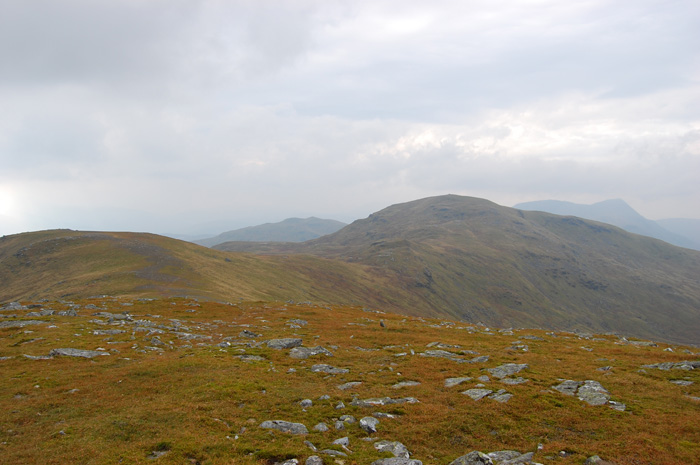 From the cairn, I just headed back down & tried to follow the route. Couldn't find any path or burn to follow so I just headed for the left hand side of Ben More with Meall Glas behind me: Eventually the fenced wooded area came into view & I knew I was going to the right of it. Then I found the burn with a path at the side, but the direct route I took was OK too & was a bit more interesting than following a path. Next there's a style over the fence (seen from Auchessan side): Straightforward from here back to the farm.

Well done Gman. Good report with some nice photos. I did these from the north in blazing sunshine.

Nice report gman and some cracking photo's with great colours

I did these in winter, very enjoyable hills. Did you see any signs regarding deer stalking on the access road?

Checking my photos I couldn't find one of the trig point.

Turns out that is Beinn Cheathaich and I didn't do that one. For a minute I thought I'd went to a summit cairn instead of a trig!

There was a sign, think it was on the access road bridge, if there's any stalking they'll try to mark alternative hillwalking routes with posts.

Smashing report. I did these two from Glen Lochay a few months back. Really enjoyed them despite my moaning. I think the Glen Lochay route is slightly easier

Nice one gman, I fancy these with a wee covering of snow and the bogs frozen over