After having done the other lot of this round a few week's previous, I was keen too get the rest of it done. It had been an early start, around 6am and we reached Lawers at around 8am after the un-eventful journey up from Lanarkshire. I was loving the sunshine and only had a plain tech tee on at the start of the walk as it was around 16 degree's already at that time in the morning.

We got a little lost after not following the horn carver route and ended up a little along the road. After no obvious path we went back and found the path leading "to the hill". The first 20 minutes of any walk are always brutal, especially early in the morning. This attitude wasn't helped when my boot lace gave up and I had too use a lace which had been lying in my pack off my dad's old work boots. (I finished the walk with nothing but a length of thread holding my flimsy boots together)

But once out of the stuffy tree's it's all good and the fresh air and the view certainly helped spur me on. The three big Munro's sprawl across the horizon and An Stuc was the best looking in the range, a towering slab of rock which look's technicaly steep from the first view. I had already climbed An Stuc previously as part of my first round but was keen too give the scramble a go.

As we ascended, the air was getting cooler, we were in the shade of Meall Griegh but the air was sticky and humid as no wind was reaching this part. As was edged up and over the wind was really welcoming. Soon I had my hat and gloves on and just before the summit I stopped and put my softshell on because of the biting wind. Funny how things change so fast, tropical in the valley and arctic above 800 meters

We finally made it too the summit rather elated and this was my 6th Munro. I was an a roll

We hadn't seen anyone yet and for the second time In this range, we had a summit too our selves. We had got up and appetite and got some cover and had some food. Cheese piece's always taste better on the hill. Water guzzeled and jelly baby's munched we started on again. Dropping into the low point and then begginning the climb back upto Meall Garbh, a hill that had also look very formidable from the angles which I had viewed it.

It's a steep sharp rise but once the height is gained it becomes pretty gradual. It has a fase summit and many would believe they have reached the summit only too find the true summit is a few hundred meter's along the broad ridge.

Once we reached the summit, we enjoyed a hand shake and then another guzzle of our water bottle's. An Stuc loomed ahead and the craggy feature's were drawing me in, I couldn't contain myself and was looking forward too the climb immesely. It would be my first proper scramble.

We dropped off and met our first face off the day. An early started from the Ben Lawers car park who planned on doing the entire round in one go. It was only around 11.30 so he had plenty time for the entire trip.

We descended the pretty craggy patches and I had too stow my pole's so they wouldn't get in the way when descending down the rock mini gullies. We found a formation of rock that looked like a thrown, Robert took his seat and was knighted as King Bob Of An Stuc

I had planned on making my own route through the crag's on An Stuc so I could get as much out of the climb as possible. Pole's stashed safely we began the ascent. Dad took the normal path and I headed up through a gully of my own. It was a really great experience scrambling over the mossy damp rock and had a good old tingly feeling from the slight exposure of the rock's. The weather was still great and there was only slight white cloud's in the sky. I can't re-call much wind and I was having a fantastic time. Hopefully my picture's give people worried about An Stuc and idea of the exposure and technicality of it (Its honestly not bad at all I hadn't scrambled any rock until that point)

The fun was soon over and my gullie's ended. I had beaten my dad too the top by around 3 minutes. We reached the summit for the second time in a month and enjoyed the views back along the ridge we had traversed and then the views across to the huge bulk of Mr Lawers. We considered re-ascending Lawers aswell but decided too leave that idea before it could gain momentum. Another bite too eat and then it was the steep descent too the col and then the extremley steep and slippery descent too Lochan Nan Cat. The water is a truely great end too the day and even though it is small by Loch standard's it still feel's very large when your standing next too it.

We picked up a trail and folowed it out too the dam and then back into the Lawers Burn valley and out the other side. Re-traced our steps and found ourselves soon enjoying dinner in the Lawers Hotel.

A great end too the day, one that I enjoyed alot. Was great too get out into the hill's with my dad. Pehaps my most memrable mountain day so far Me and the day's objectives from Meall Greigh summit ! Tasty looking ridge on An Stuc, Meall a' Choire Leith in the background 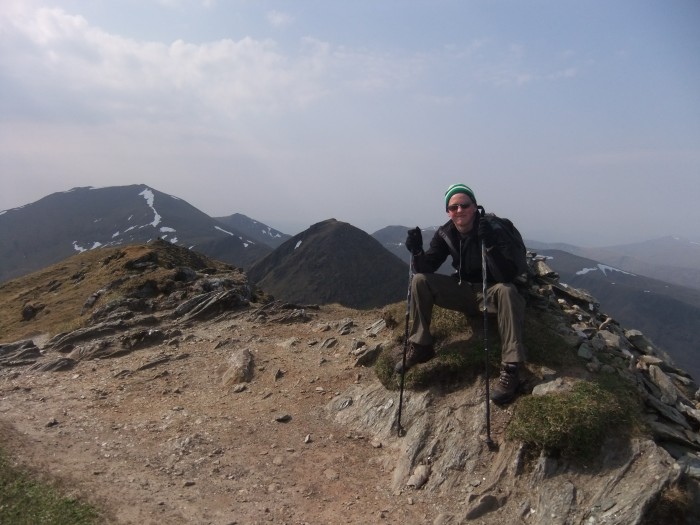 An Stuc looming from just below Meall Garbh King Bob on his thrown ! An Stuc from below ! And the drop down ! Lochan Nan Cat from just below the Col

Re: High Flying in Perthsire !

Cracking report and photos!!! A couple of scary looking ones!!

Was your dad still able to get to the summit via a bypass route or is the scramble compulsory???

Re: High Flying in Perthsire !

pollyh33 wrote:Cracking report and photos!!! A couple of scary looking ones!!

Was your dad still able to get to the summit via a bypass route or is the scramble compulsory???

My dad just followed the regular scrambling path when I went up one of the gullies, he said it was pretty straight forward. I think there is a bypass path anyway.

You'll be fine on it, enjoy yourself

I'll look forward to this outing but I'll def wait for a dry day .

I'll look forward to this outing but I'll def wait for a dry day .

Its well worth waiting for a good day. Getting the views really makes it a fantastic round !

Hopefull give it a go this winter after a little tuition