With the weather sorting itself out finally I got the wife to stamp the passport for another trip to snowdon, and this time it was to complete the last 5 tops I needed to tick.
I recruited Adrian a local Welshman to come on the walk and we set a plan in motion (he pulled a sicky).
The original plan was to park in Llanberis and make our way up Moel Eilio, Foel gron. Foel Goch, Moel Cynghorion, and Llechog.

Moel_Eilio.gpx Open full screen  NB: Walkhighlands is not responsible for the accuracy of gpx files in users posts
After the tour of Llanberis (we didn't have a road map just an OS 1:25k) we were having a hard time finding the road to take to the start of our route so we decided to park at the Snowdon railway and head up the Llanberis path then Hourseshoe over to Moel Eilio instead, or else we'd be touring Llanberis all day.

The Llanberis path is supposed to be long tiring slog up, but as Adrian and I have never walked together before the banter was flowing and we were up to the steep bit in no time. the major topic of conversation was how someone recently drove a 4x4 up to the top of Snowdon. We were blessed with good views and were constantly trying to find a do-able route for driving up, but concluded it was a mystery as every route we could think of had a boulder field to traverse before continuing. 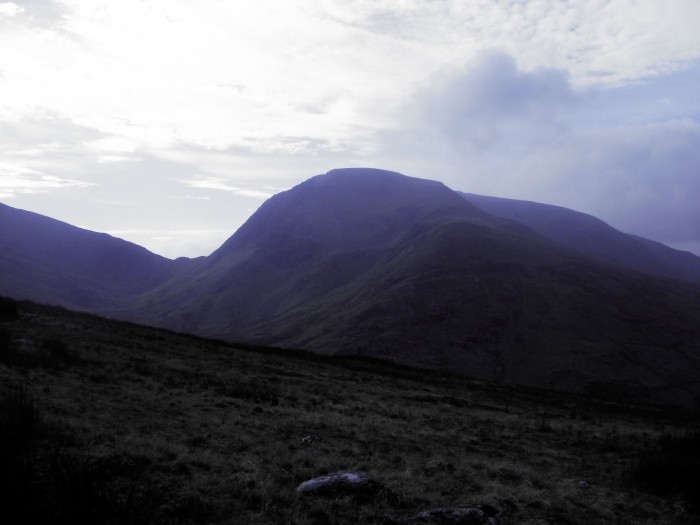 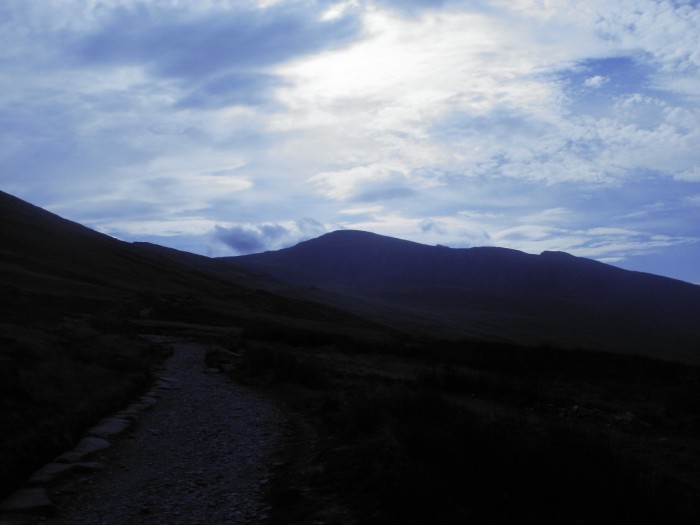 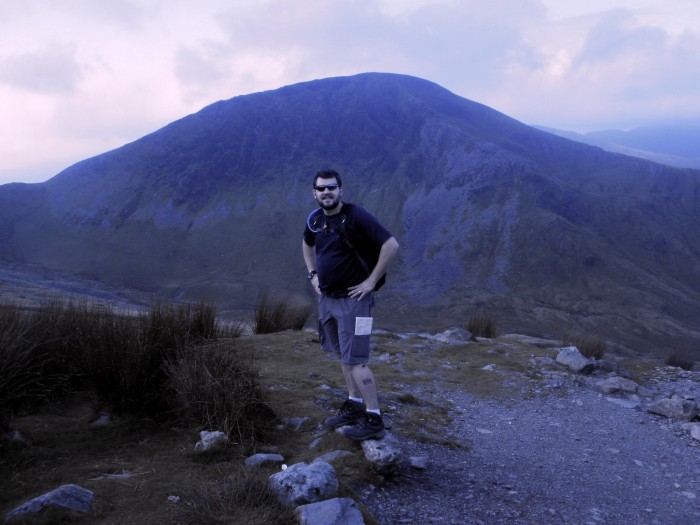 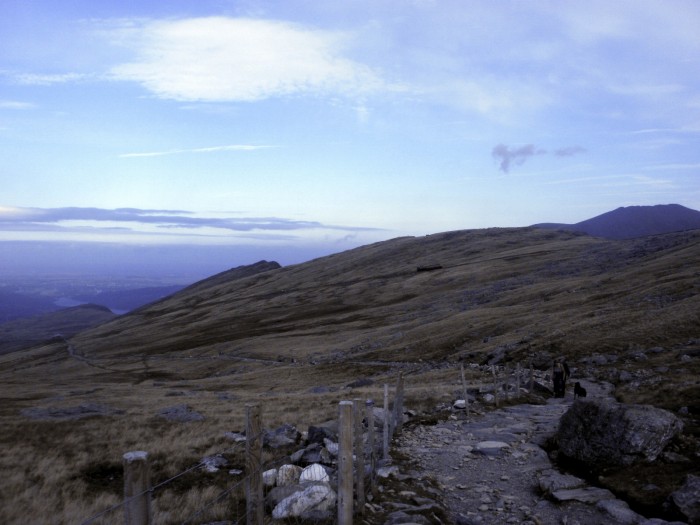 we weren't heading to Snowdon summit as Adrian had done it half a dozen times and I've done it three times this year. As we got near the top to where we decided to stop for lunch we spotted a ruin from a little cottage just below Crib y Drsgl and got out first views of the Moel Hebog group over Beddgelert and I got a very Atmospheric picture of Moel Hebog. 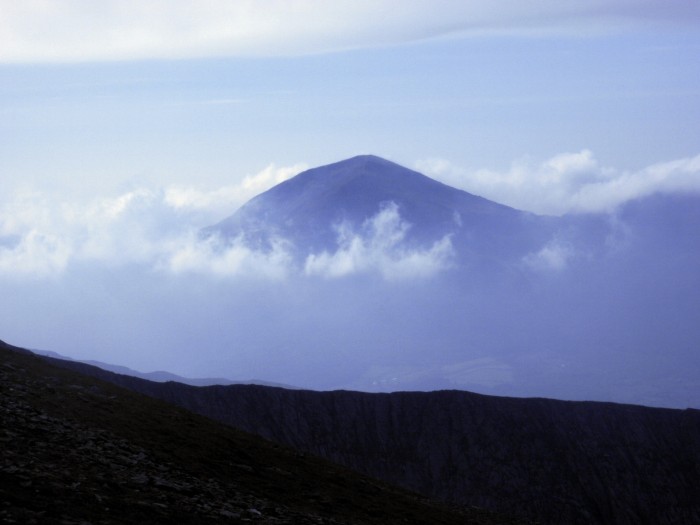 Views of the Nantle ridge and Mynydd Mawr were stunning but slightly blue and hazy as the sun we only just behind them
after lunch we spotted the top of the Snowdon ranger path and with a quick conversation we decided not to nip up to Snowdon and get on with the ridge ahead. 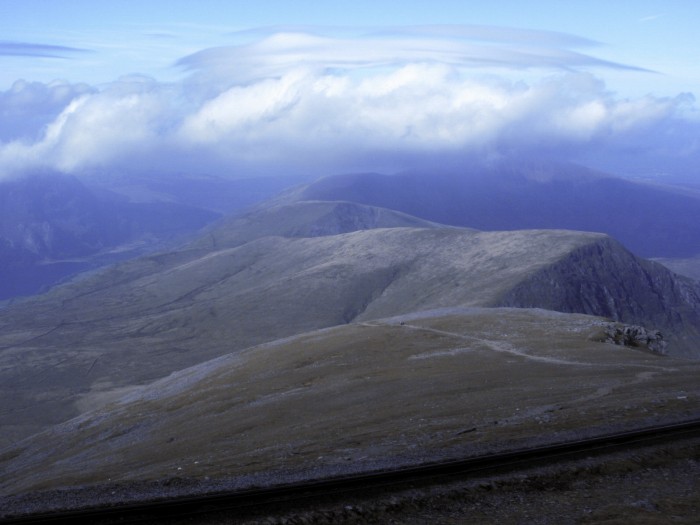 Foel Goch, Foel Gron, and Moel Eilio from the top of the snowdon ranger path. 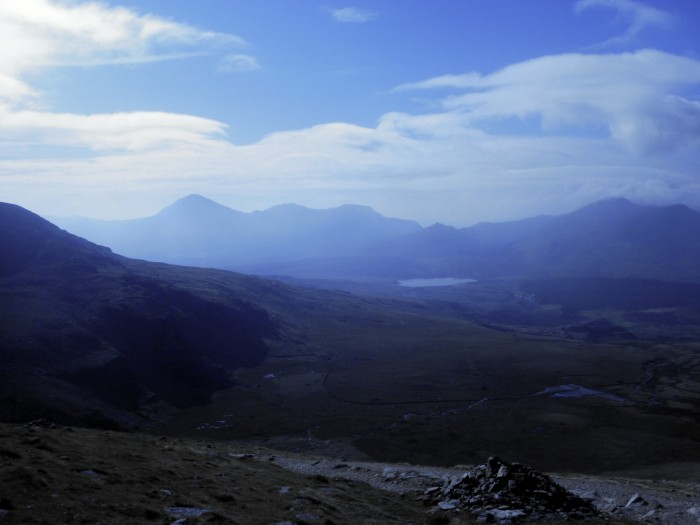 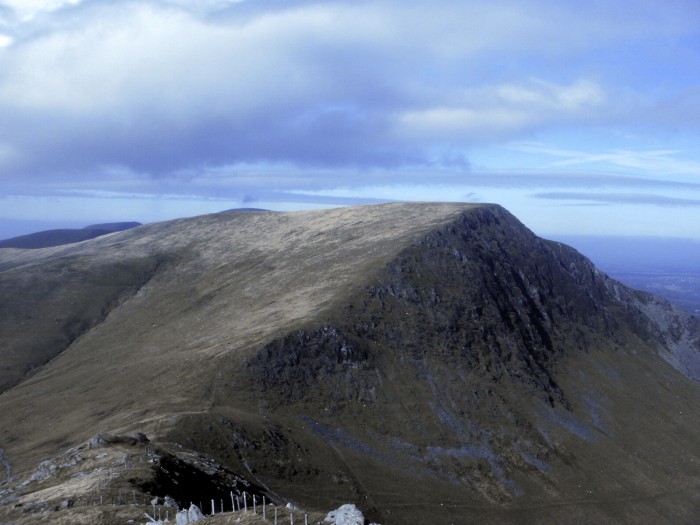 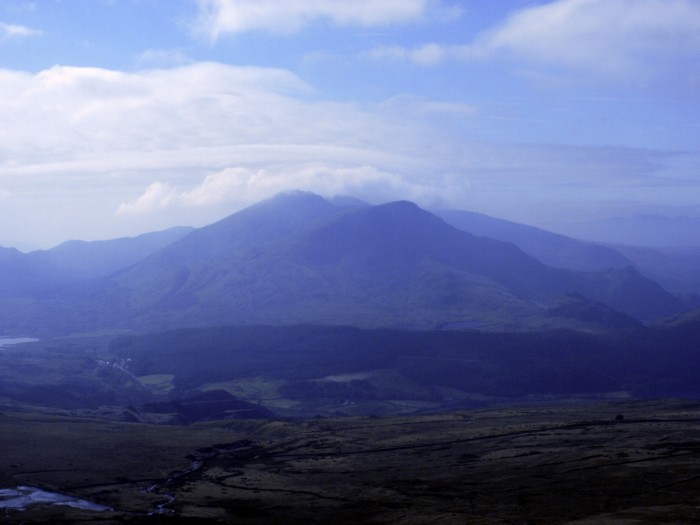 Y garn and the start of the Nantle ridge

as we started to head up Moel Cynghorion we'd not seen any walkers and had these next three hills all to our selves away from the Snowdon crowds!!!

The climb from the saddle to the summit took 20 minutes and as the sun passed over above us now the blue haze had started to lift off of the mountain ranges west of Snowdon. 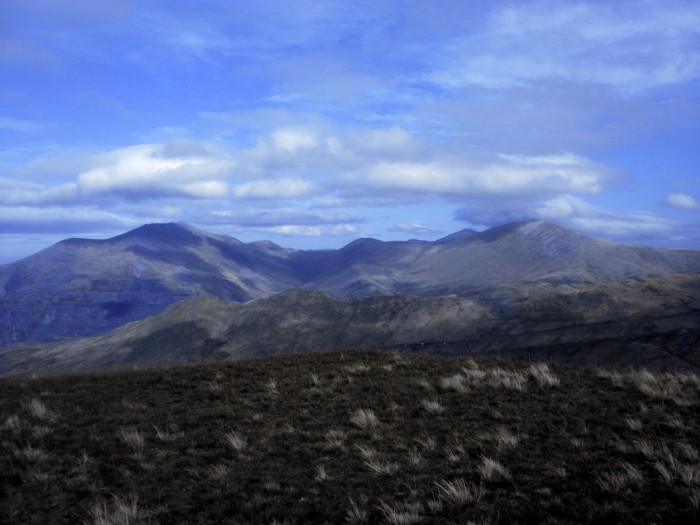 The western Glyders from Moel Cynghorion 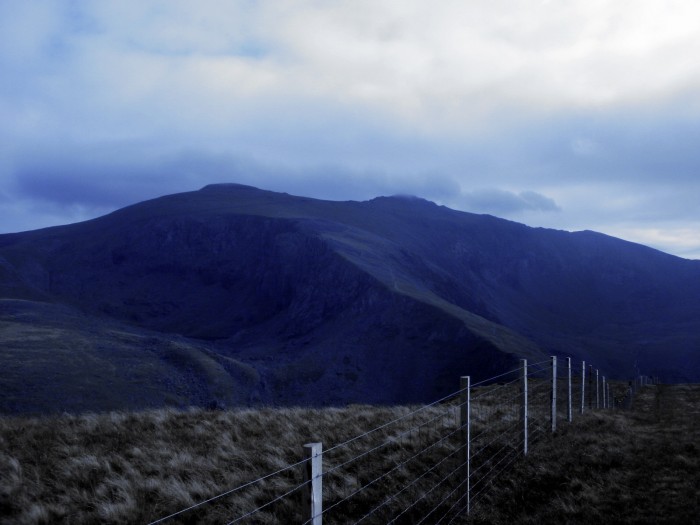 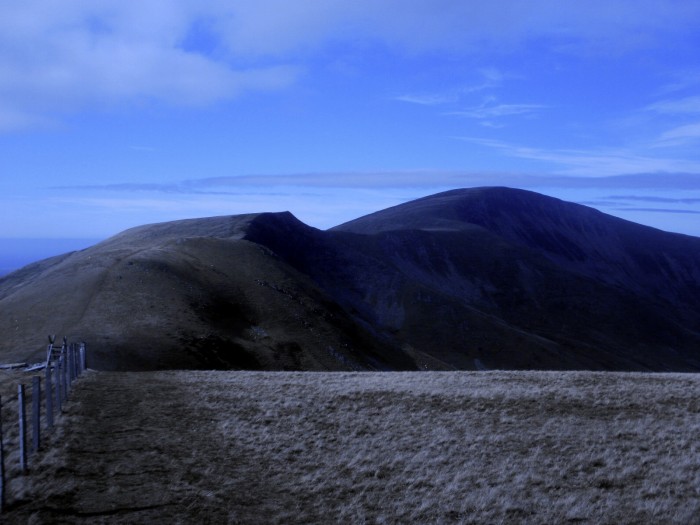 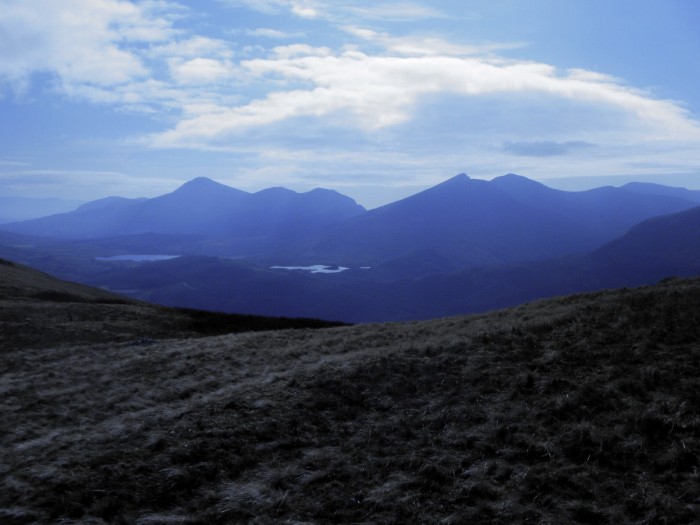 as you can see from the pics these hills are rolling and grassy so the going was very easy and in no time we found our way off foel Goch and on to Foel Gron. 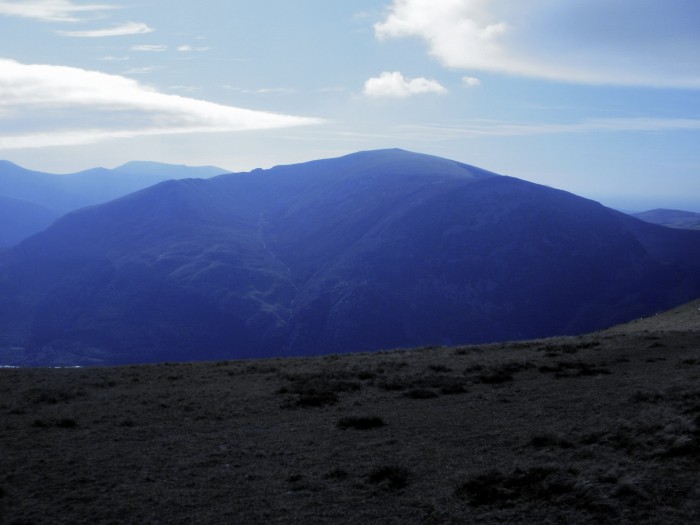 we stopped and had our second lunch (yes second Adrian can eat for Wales!!) on Foel Gron 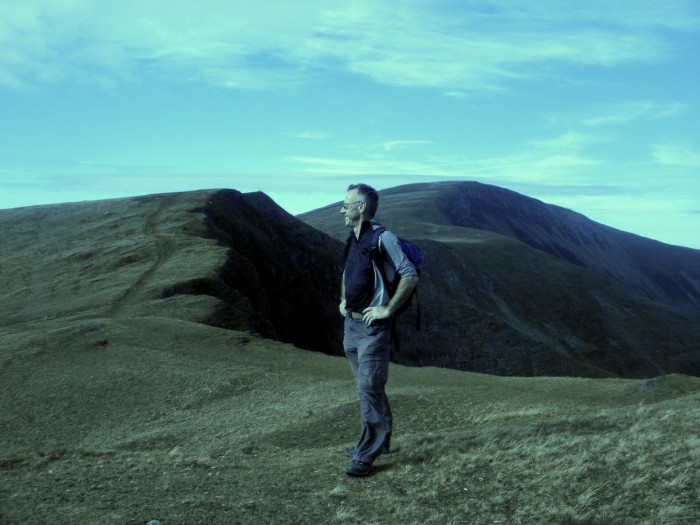 Adrian with Foel Gron summit and Moel Eilio in the back

after our second lunch we just had Moel Eilio to do and then it was time to head back down to Llnaberis.
there is almost no climb involved in climbing from Foel Gron to Moel Eilio and the summit was quickly had. 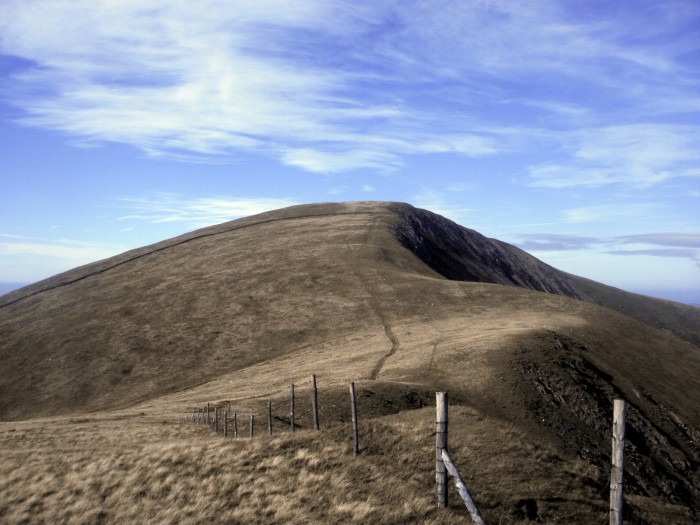 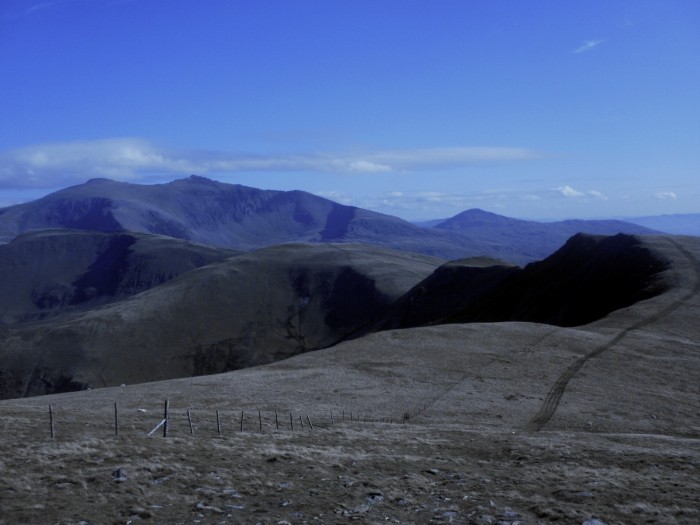 Looking back to the ridge just traversed, Snowdon and Crib y drsgyl.

the views over to Canaefron and Menai straight were lovely
and we couldn't keep our eyes off some distant peaks on the coast or the Irish sea. 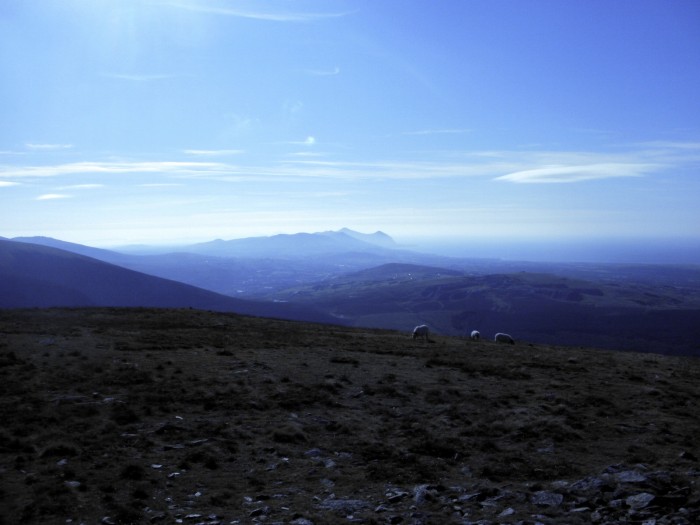 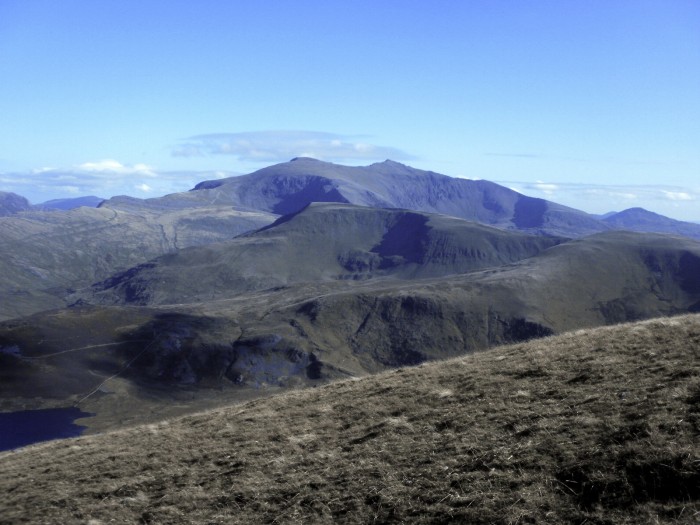 Snowdon and crib y Drysgl and Moel Cynghorion where we spent today. 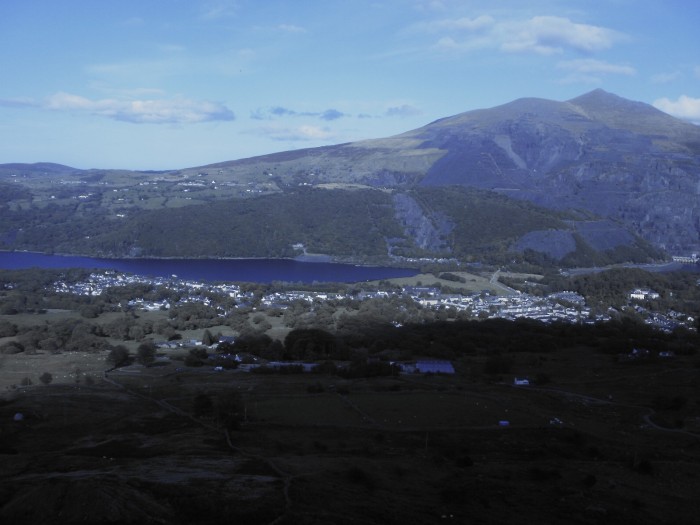 we headed down to Llanberis with this strange September heat wave baking out backs
thanks for reading!!