With the warm weather set to continue at least until Saturday I couldn't miss the chance to head for the hills. This time I decided to take my time for a change, take in the views and maybe even a few photos. I asked my 14 year old (Joe) to come along and he agreed without too much persuasion, and he even agreed to get up at 7am so we could get their early (to be sure of a parking spot and avoid climbing in the worst of the heat).

So by 08.45 we set out from the car park at the side of the A5 just at the foot of the impressive milestone buttress, and although I was carrying my factor 50 the cloudy skies suggested it might not get as warm as the forecasters suggested. From the car park the path winds through a boulder field then climbs sharply up under the buttress. 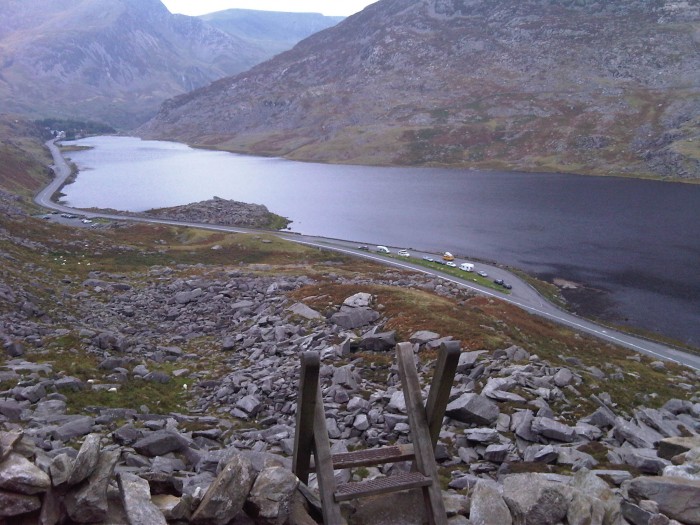 The main path countours eastwards around the buttress, although those feeling adventurous can pick any one from a multitude of scrambles up the northern flank. I decided not to push Joe into a scramble so soon, I figured he might still have been in shock from finding out that there are two 7 o'clocks in the day 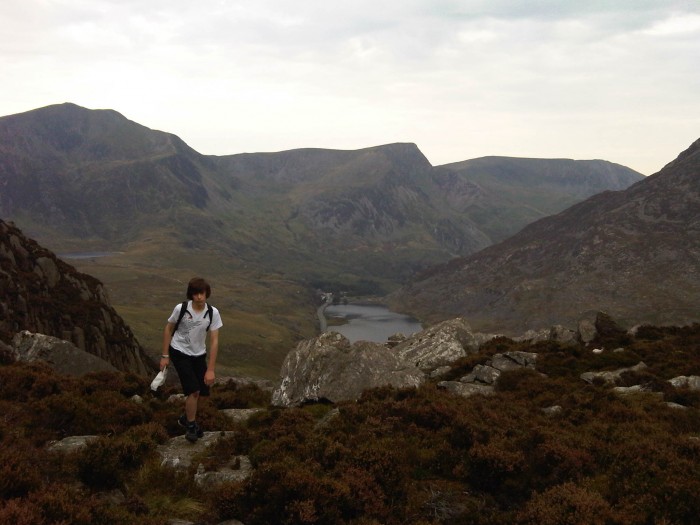 The views started to open up at this point; looking northwards across the road to Pen yr Ole Wen Some easy scrambling back towards the main ridge and we reached the 'Cannon', this long rock angled at about 45 degrees looks somewhat like a cannon when viewed from the road below. It is a popular photo spot, and indeed when we arrived there was a small group posing on the roak, so Joe and I pushed on. 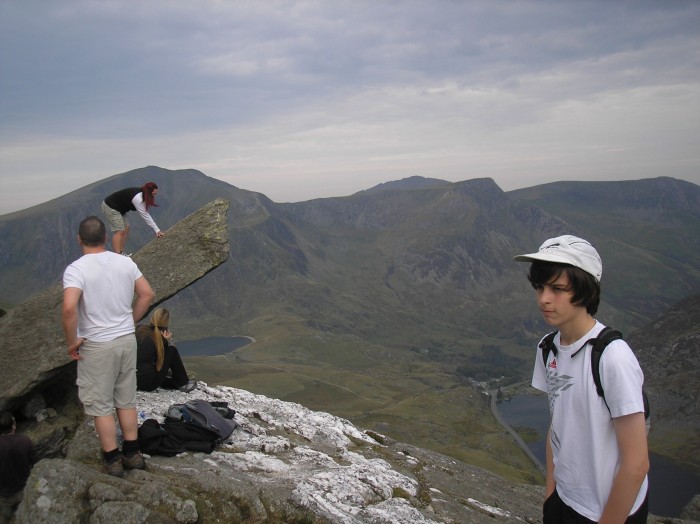 From here you can also look down westwards to Llyn Bochlwyd (sometimes called Lake Australia because of it's shape), there looks to have been someone wild camping just by the shores of the lake (small green tent). The easy scrambling continues and the summit proper comes into view There are some really challenging lines you can choose to make any ascent of Tryfan more interesting and by now Joe was really getting into it, announcing that climbing is much better thatn walking.

On reaching the summit I asked Joe to take a photo of me on top of the twin stones of 'Adam and Eve', however his photography skills transpired to be even worse than mine as we couldn't find the photo later.

A short, steep and rocky descent brings you to Bwlch Tryfan from where the climb up Bristly Ridge begins (there is a path up to the Glyders to the left of the ridge for the more faint-hearted. At this stage the sun started to break through the clouds, but I knew we were going to be hidden from this during the climb of the ridge, so the sun screen stayed in my rucksack. 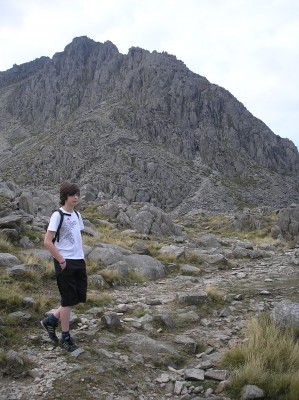 There is a fairly obvious line up the ridge, through a narrow gulley, although there is still scope to choose sections that involve some top end scrambling. At least one of the sections we did was closer to a climb than a scramble and I was very glad that Joe didn't slip. Topping out near the summit of Glyder fach we paused to look back at Tryfan, and although it could be described as a fairly small mountain, it is one that has a really rugged aspect, whichever side you view it from. On the summit of Glyder Fach we made a brief detout to stand on the 'Cantilever'; another popular photo spot as groups of people can all stand on this one.

From beneath a nearby pile of rocks I surprised Joe by producing a bottle of Lucozade sport - I had placed it there earlier in the summer in preparation for a long fell-race I was planning to do. However, I didn't do the race in the end, so the bottle had lain there since and although the sell-by date had expired in the meantime it was cool and refreshing. There was another bottle some miles ahead, but we weren't going that way today so it will stay there a bit longer. In fact I know of a few people who have stashed drinks in Snowdonia and then forgotten which pile of rocks they used, so the drinks will lie there for a long time (perhaps a future archeologist will wonder about the people who buried drinks under rocks in the mountains).

From Glyder Fach we headed west towards Castell y Gwynt, and had lunch beneath this strange formation of rock spires and pinnacles. The section towards Glyder Fawr has little in the way of climbing, although the terrain underfoot is very rough. 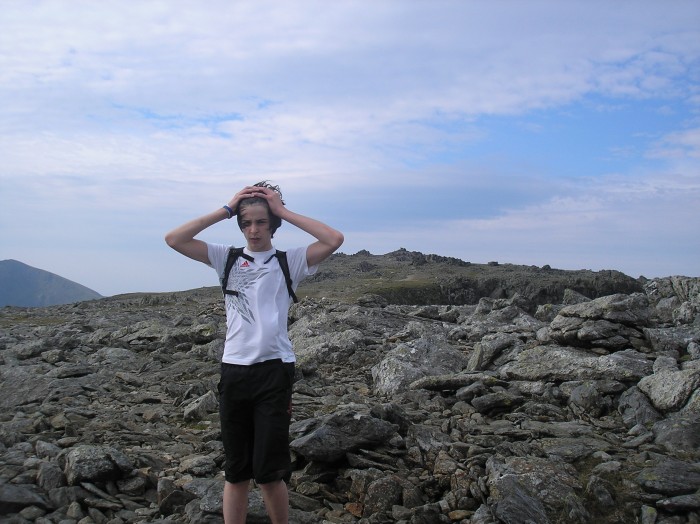 The views along this section are great in all directions; south west towards the Snowdon Horseshoe 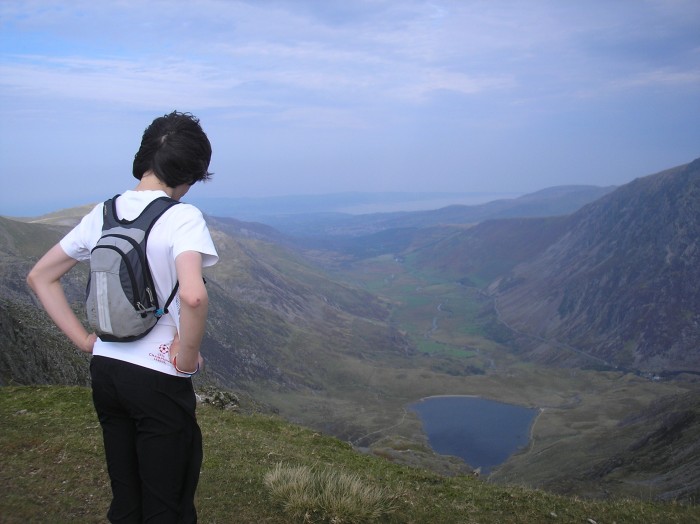 The descent northwards from Glyder Fawr down the steep scree slopes towards Llyn y Cwn can be tricky (still I think I prefer going down this, especially on a hot day - I've frequently been frustrated climbing this section with the loose ground constantly slipping away so for every step up you slide back one. At Llyn y Cwn head north east into Devil's Kitchen, there is a well made path most of the way so that descending seems quite easy (although I wouldn't recommend hands in pockets on any descent). The path heads down to Llyn Idwal, which was now busy with walkers following the path that makes a nice short circular walk around the lake for those who don't want to go high. Looking past the lake Pen Yr Ole Wen looms on the other side of the A5. 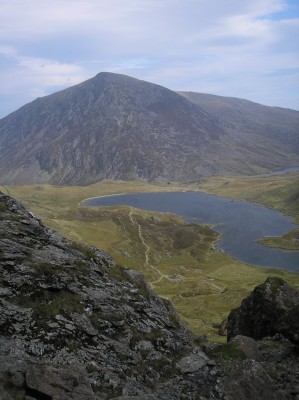 It is only when you look back at Devil's Kitchen that you appreciate what an impressive sight it is. Walking back alongside the lake we finally came into the sunshine. So after an ice cream to cool down from the shop next to the YHA we headed back along the A5 to the car parked under the distinctive profile of Tryfan. 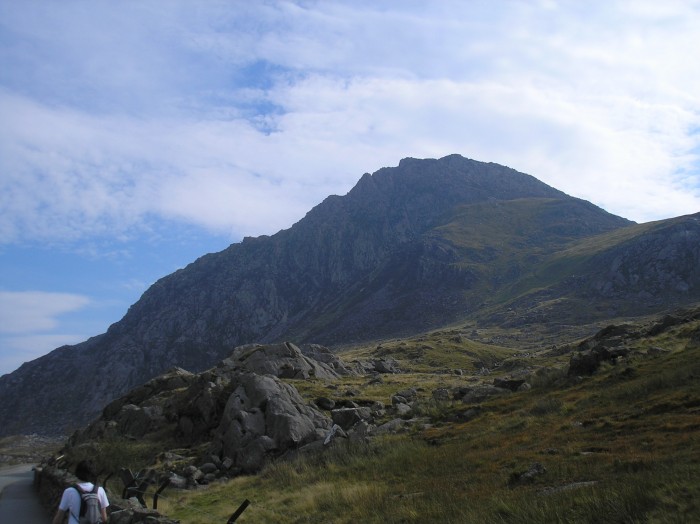 As we were heading home at just after 1 o'clock Joe was quite happy that he would still have some of the day left and that his feet weren't hurting like they had been when we did the Ben Lui group. He even agreed to come to Scotland with me later in the year, providing I take him shopping to Glagow on the way home.