Corbetts included on this walk: Breabag

our route.gpx Open full screen  NB: Walkhighlands is not responsible for the accuracy of gpx files in users posts
Starting from.
1.5km south of Stronchrubie NC 252 179

The joys of chasing the weather had brought us up to the far North of Scotland Sutherland. The forecasts seemed to be pretty poor all over for the weekend, but the further North seemed to be getting the better of what was on offer.

We had the weekend window to make the best of what was on offer. Saturday supposedly getting the better weather would be reserved for Quinag. And today Sunday the 2nd would be for our Ben More Assynt circuit with a twist.

Got parked up at 1.5km south of Stronchrubie NC 252 179 and were on the hoof before 9am, we followed the good path for approx 2km heading for the Bone caves. We spent a good 30mins exploring this unique place before finally moving on. Making for the low point on Breabag, we then headed for the 718 summit!!! Heading north from there towards Breabag Tarsuinn. As we were heading towards Breabag Tarsuinn I realised my error, I had assumed the 718m height to be the summit, F**k Grrrrr. Ahh well it would not be a problem as we could still catch the summit on the way out as we were planning on ascending the south ridge of Ben More Assynt anyway.

The views West were ok; the sky was trying its best to rid himself from all its cloud. But to the East towards Conival and Ben More they were still non-existent. We got our first glimpse when we were on Breabag Tarsuinn. Initially that’s all it was a glimpse, but very soon we were blessed with cracking views that would continue for the rest of the day. 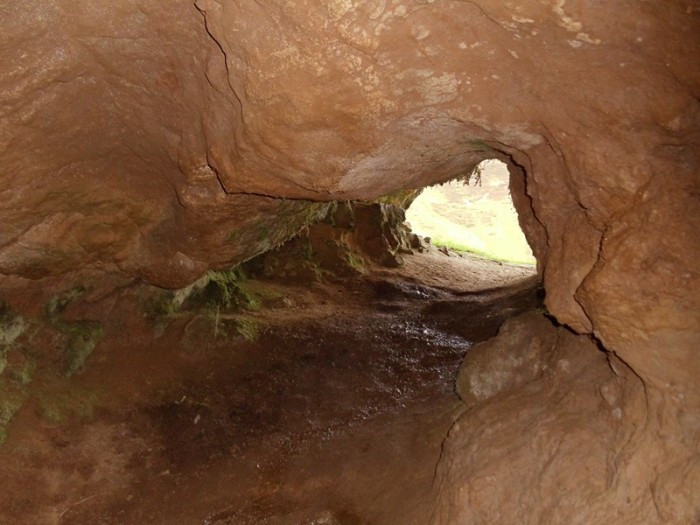 Julie with the mutts. We now had to try and negotiate a route up Conival and from Breabag Tarsuinn this looked near impossible. A few weaknesses were spotted but not many. We carried on down, and made our way up as best as we could. It was a steep climb, very tough indeed. At about 750m we were met with a wall of rock, I may have been able to negotiate this if it were not for the dogs, but because of their presence we had no choice but to contour round NW until we were able to break on to the ridge. We eventually hit the ridge and the path about 500m from the summit.

The views were breathtaking all around. It really felt like all the earlier hard work, combined with my error on Breabag had paid off.
Ben More Assynt looked like an easy route to the summit, but my eyes were drawn to its tasty South ridge. Looked like we were now going to have some fun.

Ben More was reached fairly quickly, and before we knew it we were halfway along the South ridge. This ridge had already exceeded my expectation and we were only but half way over. Farther along there is a few airy bits and at one point I was actually on all 4’s. That’s what happens when you wear new boots for the first time. (Scarpa sl3 boots, I think the soles are crap very slippy on the rock. I have no confidence. I want my old ones back) 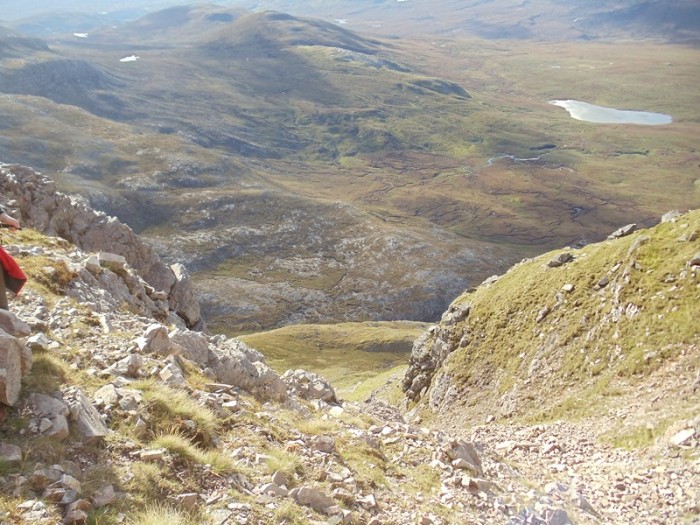 route on to Conivals ridge. Ben More and the south ridge Back to Conival from Ben More Back along south ridge towards Ben More. Wilson seemed to take it in his stride, nothing new to him. But Jake seemed to have much less confidence on the ridge, especially on the airy exposed bits. But hey, he is only but 9 months old, and im sure, as like Wilson he will gain experience as time goes by.

We soon pass the 868 height and then drop down to the river Oykel. We then decide on the easier less steep route up, and then skimming the top of Coireen Ban before finally reaching what should have been our first summit of the day, the 815 summit of Breabag.

The sun was setting as we were approaching Breabag, and the views were tremendous. This raised our spirits immensely. By the time we reached the summit we had missed the best of the sun setting, and within no time dark had set in all to quickly. and from the summit

We had a quick rummage through our pack for the head torches, organised our maps, got a bearing and decided to make for the Bone Caves from there it was easy street back to the car on very tired legs.

Some great photos there - have you got a new camera? Enjoyed that having been around the area the previous weekend. In fact I was looking at a variation of this route (same high bits but starting from Benmore Lodge instead, using the bike), but settled for the quick way up Breabag instead, which was still much more interesting than I expected.

Some great pics there Dave. Looks like the new 'mutt' has the hang of it! I know what you mean about the Scarpa SLM3's. I have very little confidence in mine and I feel like I'll slip on every surface - and mine have a 100 munros on them.

Those caves certainly look interesting - can understand why you spent some time there at the start.

You've got me worried about the boots - I've just got a pair of SLM3s and worn them once so far as my Meindl Burmas are wearing rapidly. I found the soles on the latter to have great grip but, as the leather wears, the ankle support isn't as good.

Great report Dave and some beautiful photos, Wilson looks a bit worn out in that pic - is he getting the run around from the new guy

Enjoyed that very much Dave, and a very interesting route. We took the usual route from Inchnadamph earlier this year and really enjoyed the two munros, but I remember at the time thinking of the alternatives. Especially the steep route up onto Conival. Great effort all of you!

Another Dave, Julie and dugs classic! I like it. The shots of Suilven and Canisp in particular. Whetting my appetite for a scheduled outing next month.

Well done all, some cracking photoes in there, a bit out of my reach but great to see more of what could be in store for me in the future.

Wow - just caught this. Lovely report and a couple of cracking photaes in there, tho not enough of Wilson for my liking.

Great report dave,
It just wouldn't be a Davetherave report without a corbet added to a normal round

I done these early in my carear as a munro walker but did not include the corbet. Weather was not great either and i hated the walk and reverse from conival to ben more etc. Love the photo of the cave and the dogs. Superb