Climbing outliers in the Cairngorms can be a bit annoying - they all seem to look the same: round-shaped, undistinguished hills with heathery, sometimes wet slopes crossed by countless peat hags. Certainly not for those craving sharp edges and the excitement of scrambling. But there is something magnetic about mountains like Geal Charn - probably the feeling of isolation and silence. These are places where you can almost touch the solitude...

our_route.gpx Open full screen  NB: Walkhighlands is not responsible for the accuracy of gpx files in users posts
Two days after boldly going up Corryhabbie Hill

we teleported ourselves to Dorback Lodge (well, almost... in a small red teleporter called Toyota). It was a very windy day and we struggled to get out of the car! Conditions were far from perfect, but we still decided to give it a go.
Geal Charn from the end of public road: 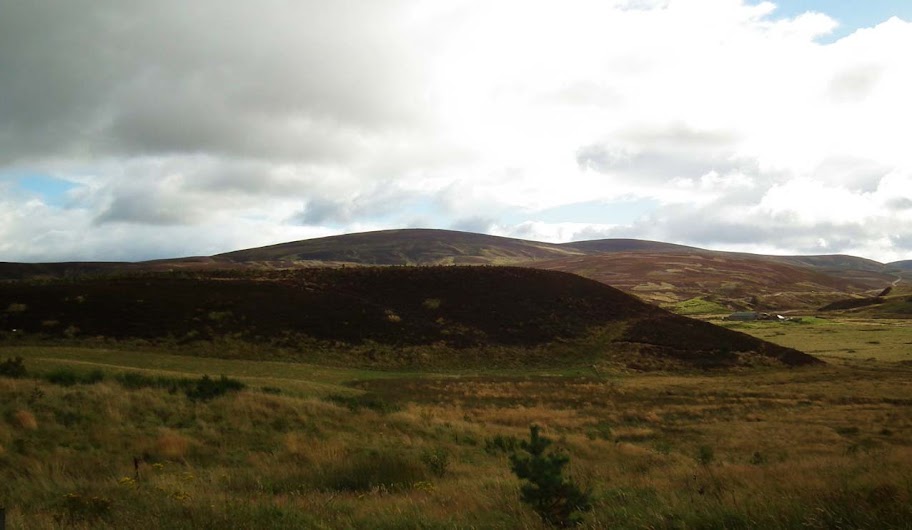 WH walk description suggests taking a faint track climbing to the right beside the fence, but we opted for the main road to Dorback. Just past the derelict lodge we turned right and took another track going SE along Dorback Burn. This approach offered good views towards our target hill: 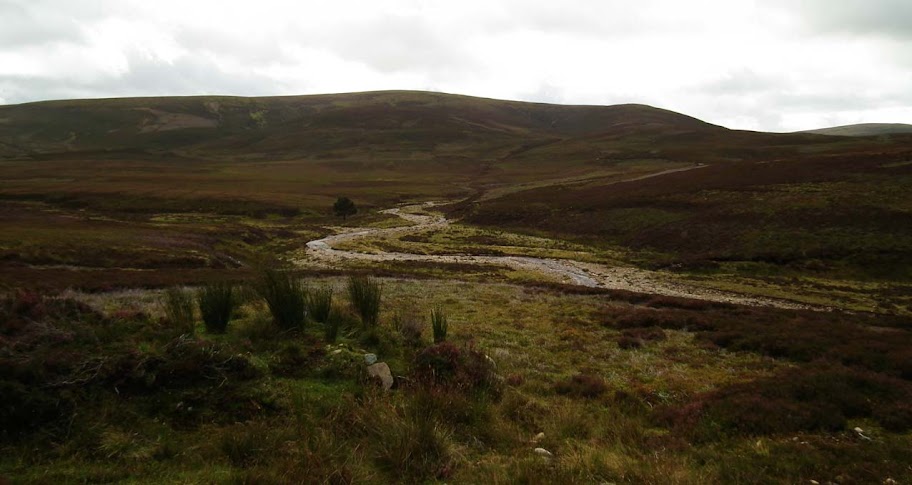 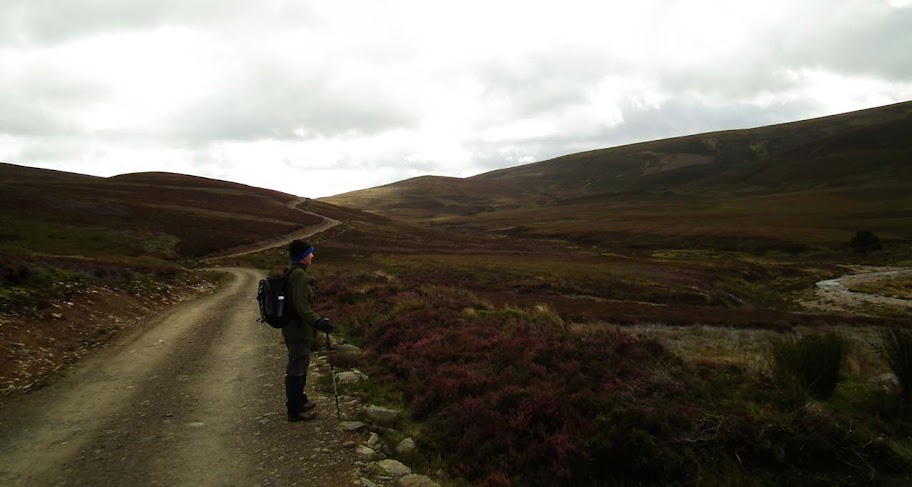 The track offers easy going as it continuously meanders uphill, and after a couple of kilometers when we looked back... 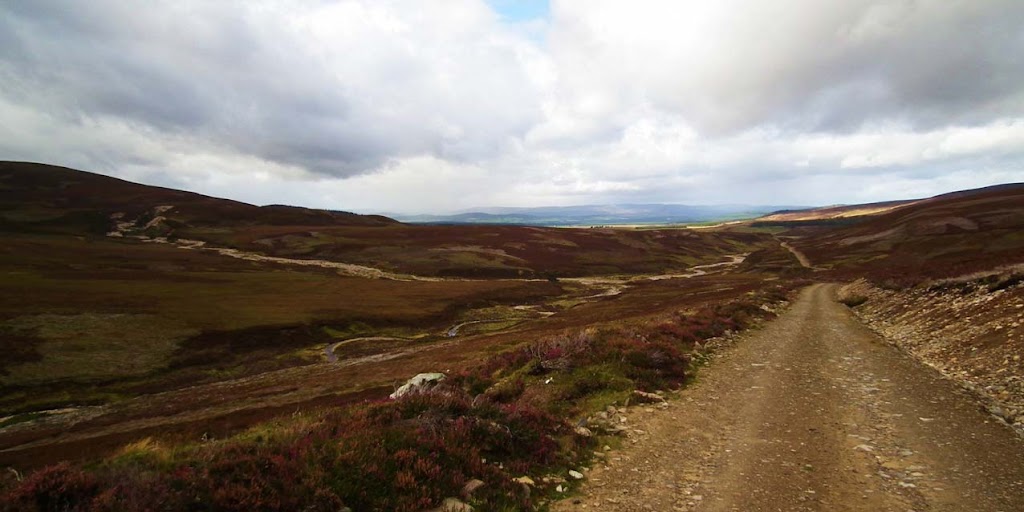 We walked all the way up to the col between Carn na Farraidh and the main bulk of Geal Charn. Here it was necessary to leave the comfortable track and dive SW straight into the bogland... There's a faint path in places but mostly we climbed up wet, heathery slopes. 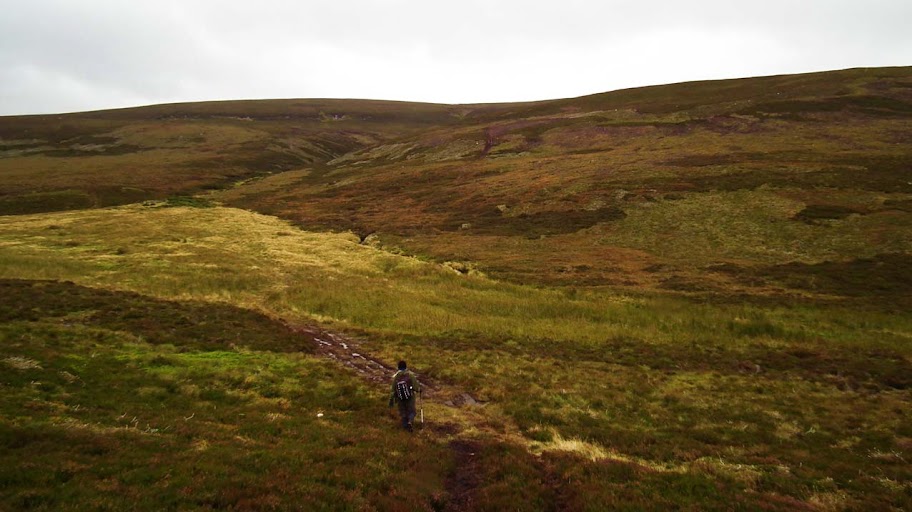 Weather still wasn't as good as we had hoped for, but as we neared the summit plateau... a glimpse of hope, perhaps? 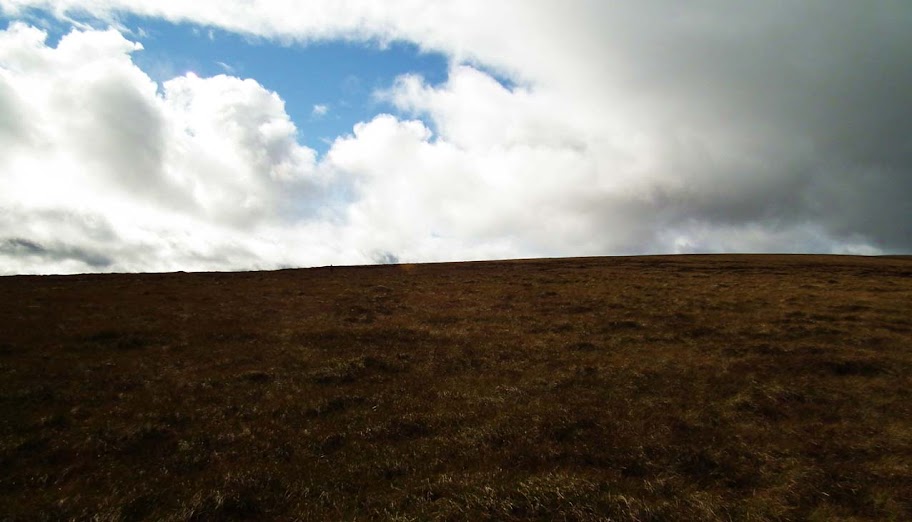 I always try to stay optimistic so I concluded: windy, rather cold, cloudy, but at least it's not raining!

Once on the summit plateau, the grassy ground was much easier than the slippery slopes. And even though mother nature was not friendly altogether, nice views compensated for her moods: 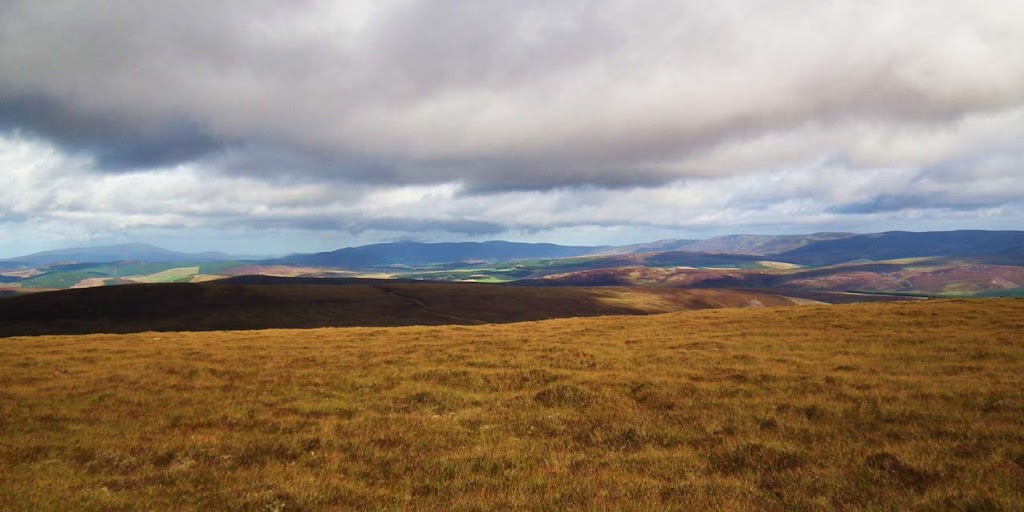 Looking north with the pointy shape of Ben Rinnes slightly to the right:

We maneuvered a bit among some peat hags and eventually reached the summit cairn. It is a nice place... 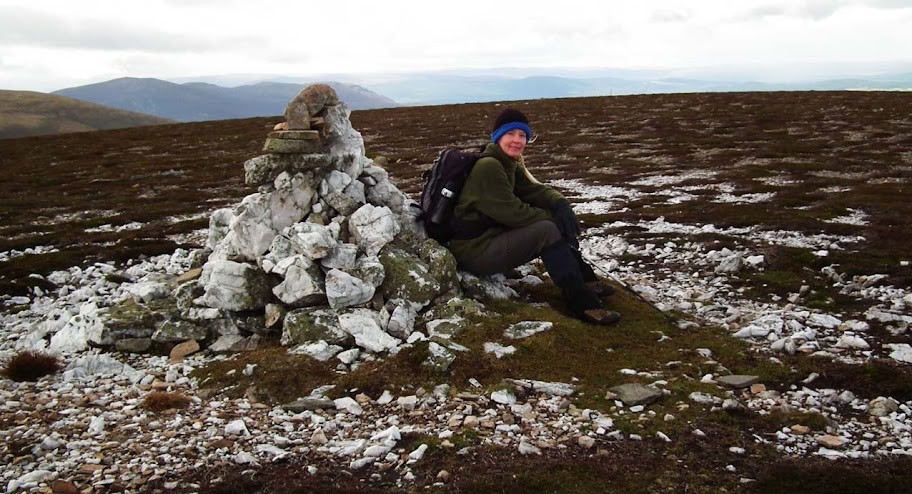 ...with lovely views in all directions, especially the panorama of Cairngorms from Ben Avon to Meall a' Bhuachaille. 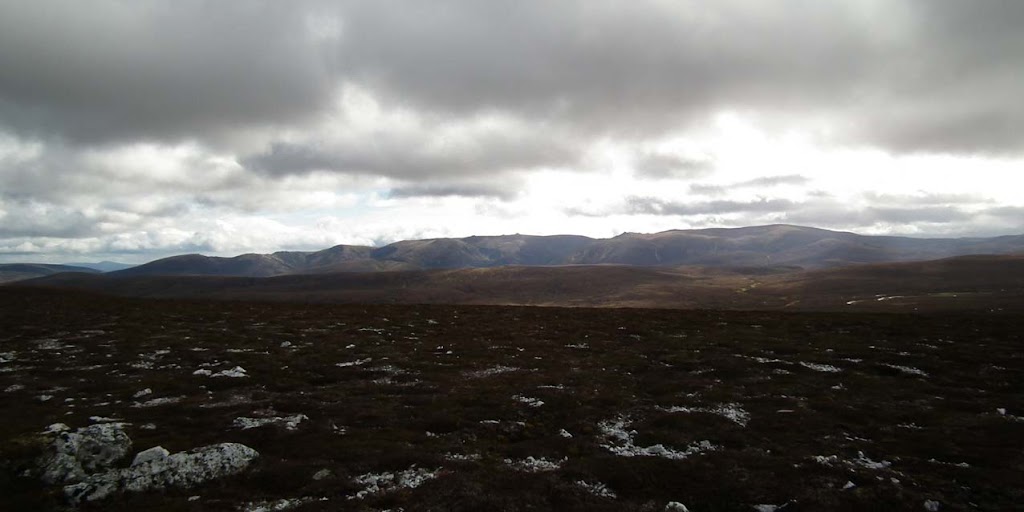 I wish we could've spent more time on the top of Geal Charn (we even brought our tea and cookies to have a picnic on the summit) but the gusts of wind were so nasty that after five minutes of filming (without my gloves) my hands went numb. The cairn is not big enough to offer some substantial shelter, so with regrets we decided to go down. Before we left, we took some pics of cloudy Cairngorms.
Ben Avon: 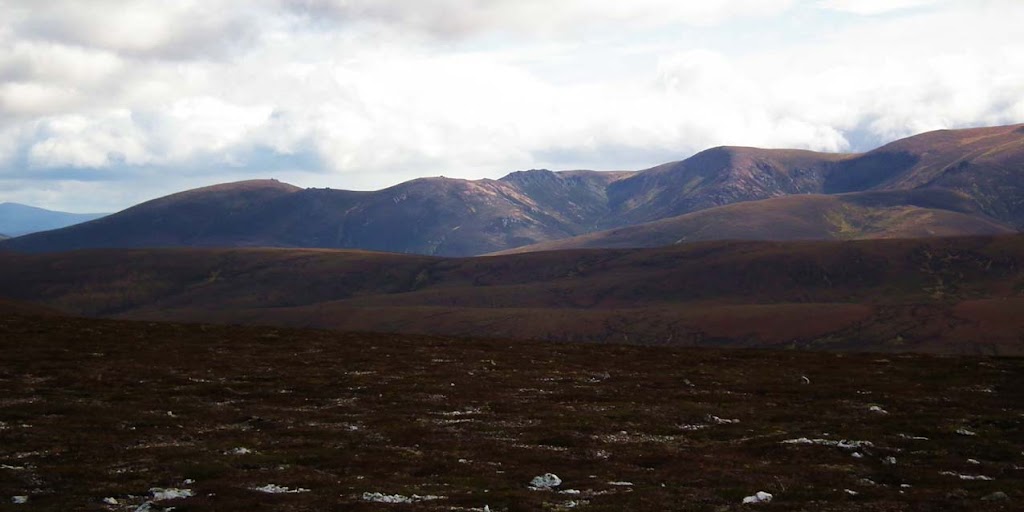 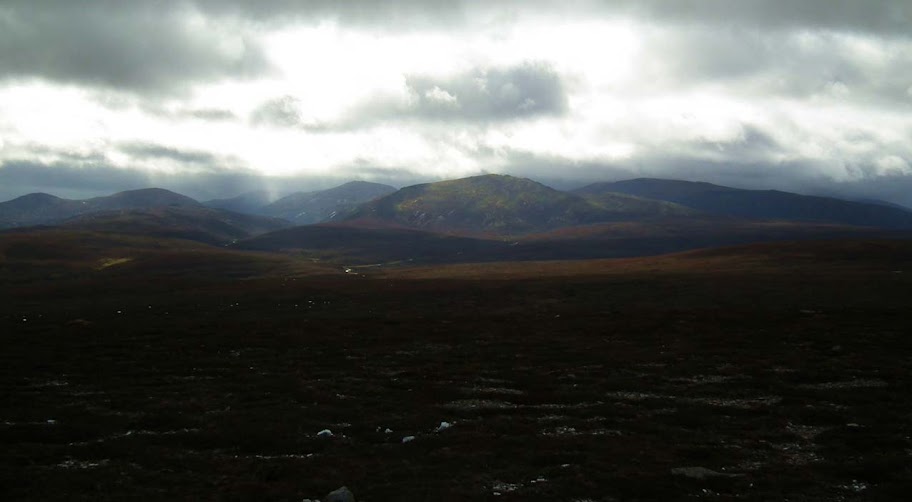 Ben Rinnes on the northern side: 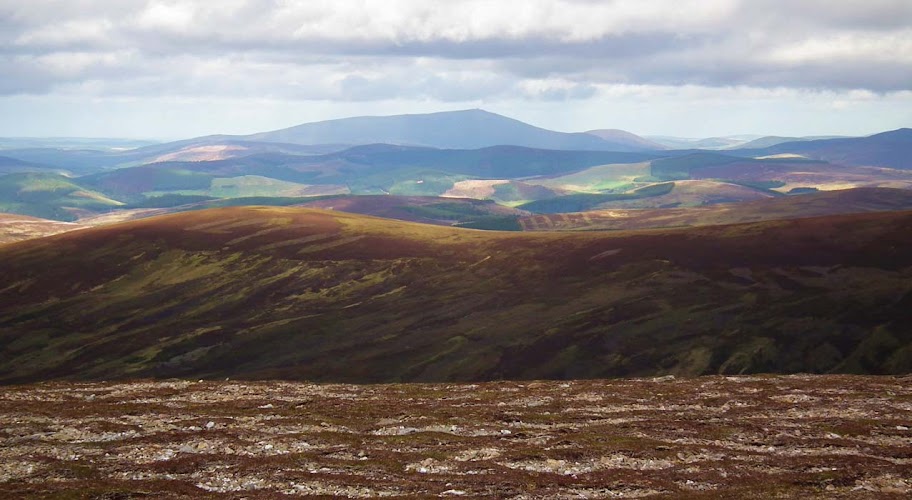 A shower passing over Beinn Mheadhoin. Just in front of it, another Cairngorm Corbett, Creag Mhor. 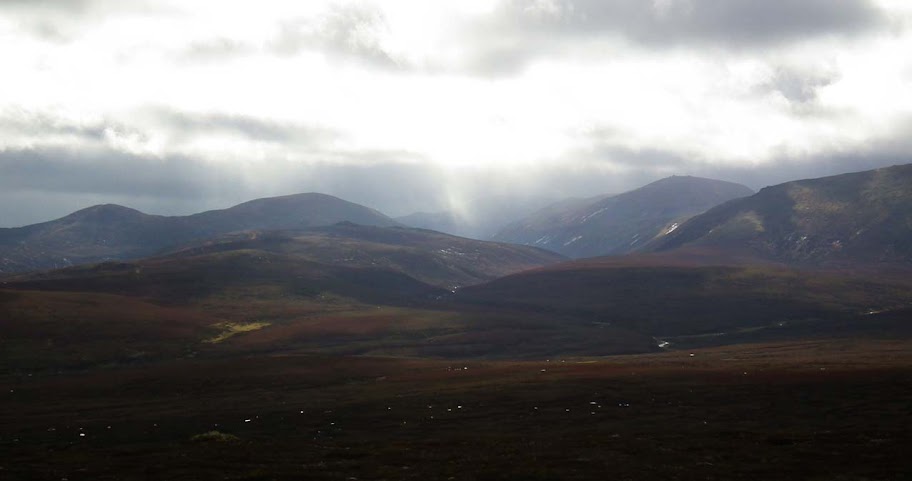 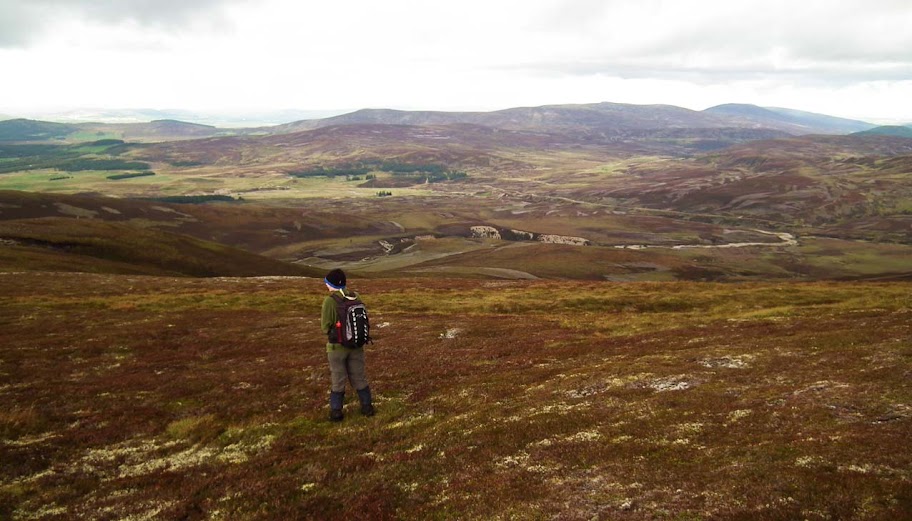 The return route took us along the western shoulder of Geal Charn past some more peat hags, with good views to the north and east: 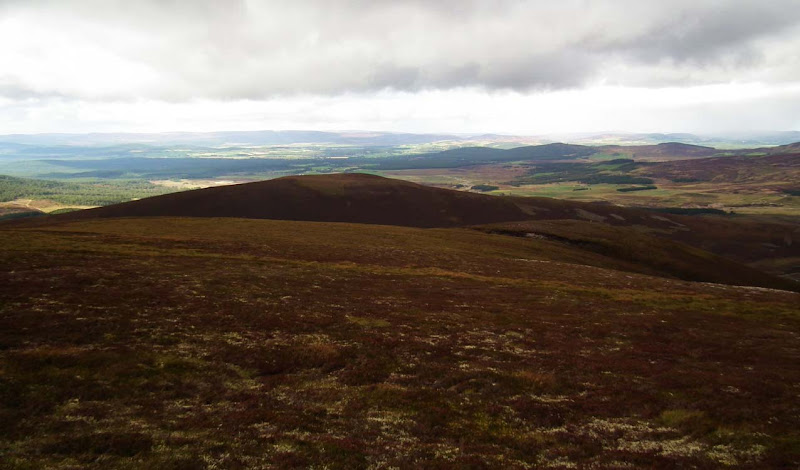 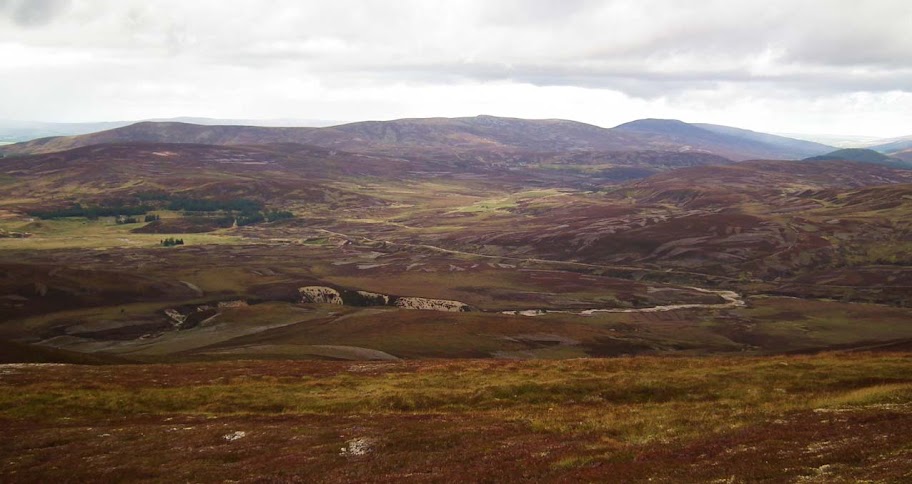 We continued descending along a small stream (Allt nan Gamhuinn) until we picked a good track which took us all the way back to the road by Dorback Lodge. Crossing Dorback Burn could've been tricky but fortunately somebody had left a footbridge over the narrowest point of the stream (just a wide plank, but it did its job

).
We completed the circuit in about four hours (could've been less but for the wind slowing us down) and I'm sure in good conditions this is a perfect hill for winter adventure, even for hillwalking rookies.
Later the same day, having uploaded our photos, I had a closer look at another potential target - a Corbett called Creag Mhor, situated just opposite Bynack More. And, as you've probably guessed by now, it will be the subject of one of my next reports. So get ready for more meowing in the Cairngorms!

great stuff BP, I love these heather clad beauties, something about the endless rolling of these hills makes them a great place to wander. Particularly as they are rarely crowded by others. I thought your summit pic had heavy frost on it at first glance

but a moment later I realised what it was

Lovely place. Not done any real walking in the Cairngorms but its somewhere I can't wait to get into. Always look for any reports from around there, so thanks