Forecast for Saturday the 24th looked slightly more promising than the whole previous week. At last there was a chance to see some sunshine. So even though wind predictions suggested gusts up to 60 mph, we still took the opportunity to visit the hills.
We had some B&Q shopping to do in Inverness anyway so I suggested climbing a "quickie" just a short drive down the A9. Creag Dhubh may just be a Graham, but it always drew my attention each time I drove past Newtonmore - it's an interesting steep-sided hill, an outlier of the main bulk of Monadliath mountains. I expected it to be a good viewpoint - and I wasn't disappointed.
There is a good small car park on the north side of the A86, opposite Lochan Uvie. The eastern flanks of Creag Dhubh looked unbelievably steep from below and the most logical choice, when I looked at the map, would be to walk a short distance down the road and pick a path along Allt na Glaic. Yeah, sure, a logical choice (I've become so LOGICAL these days, have just had a look in the mirror, am I growing Vulcan ears???

) was not for my husband - he likes his mountains tough!

our_route.gpx Open full screen  NB: Walkhighlands is not responsible for the accuracy of gpx files in users posts
Expecting a steep and painful ascent, I followed Kevin through the gate and along climbers path leading NE across the slope, with nice birch woods around. The massive wall of vertical rocks to the left-hand side was overwhelming... 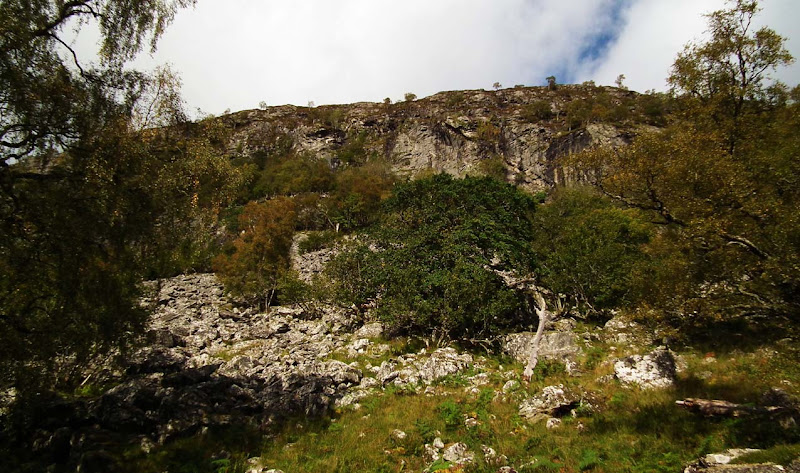 ...whereas to the right, we could still see Lochan Uvie: 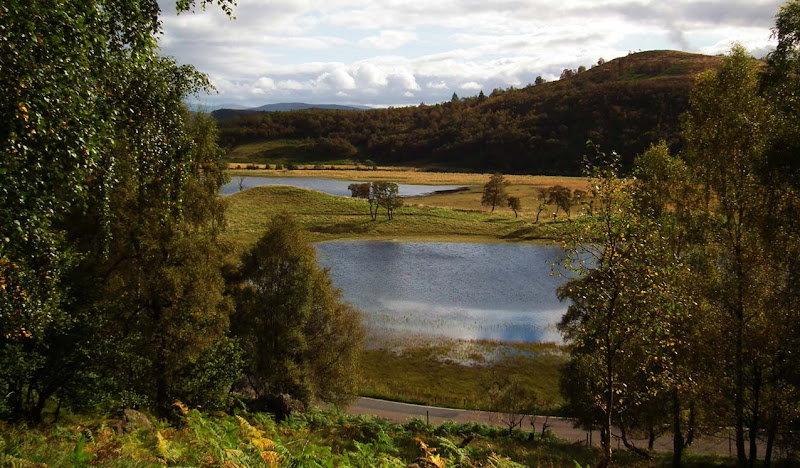 The path vanished at some point and we continued climbing steeply uphill. We crossed some boulders on the way and reached a fence heading directly up the slope. The path reappeared along the fence so we followed it for a couple of hundreds meters. Steeeeeeep but I charged it with high levels of energy! I slipped once and bumped into a rock (ouch, my knee.....

) but generally it was great fun! Especially when I looked behind: 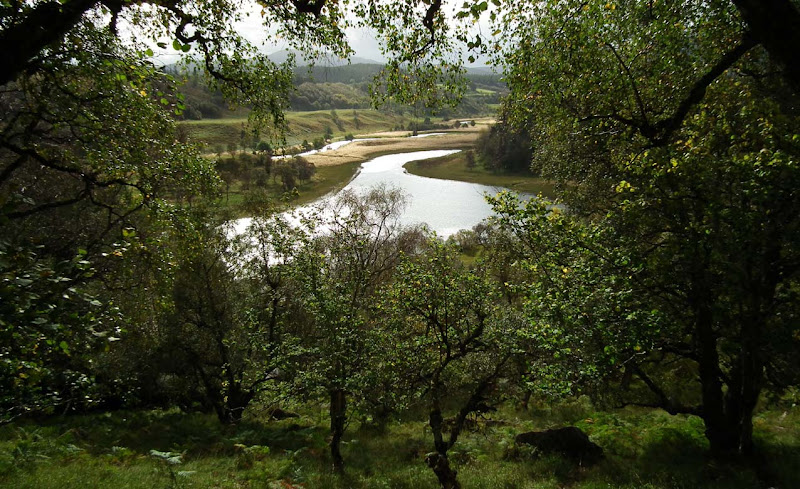 Higher up the boulders gave way to thick vegetation, mostly a sea of bracken, and the path was gone again. Views on the other hand, were getting better with every step: 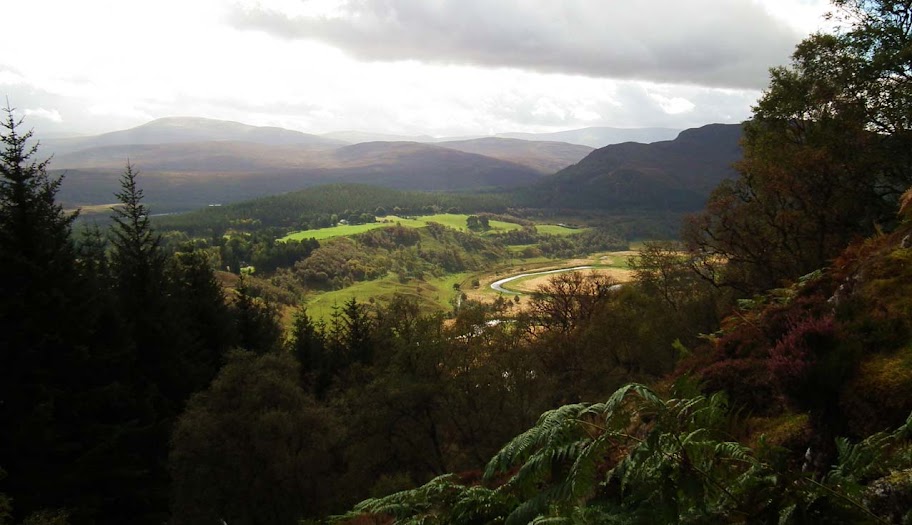 Out of the bracken sea and... into the heather! 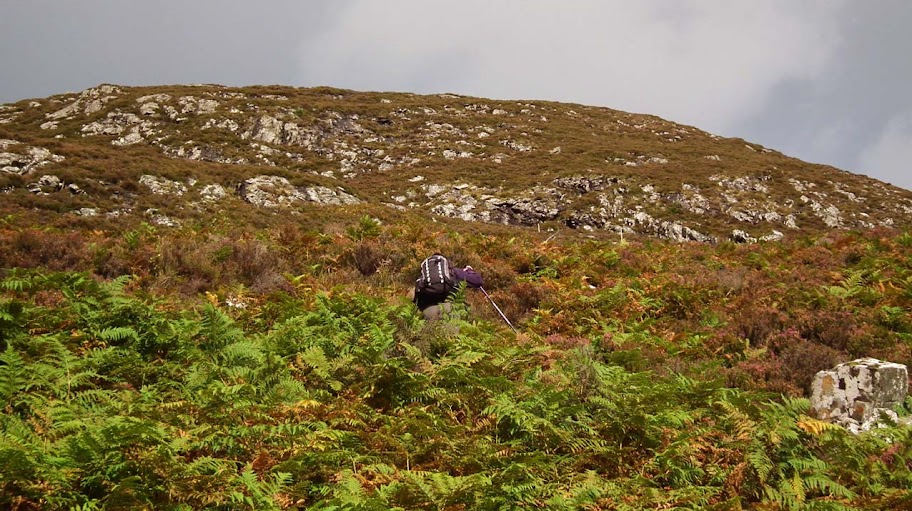 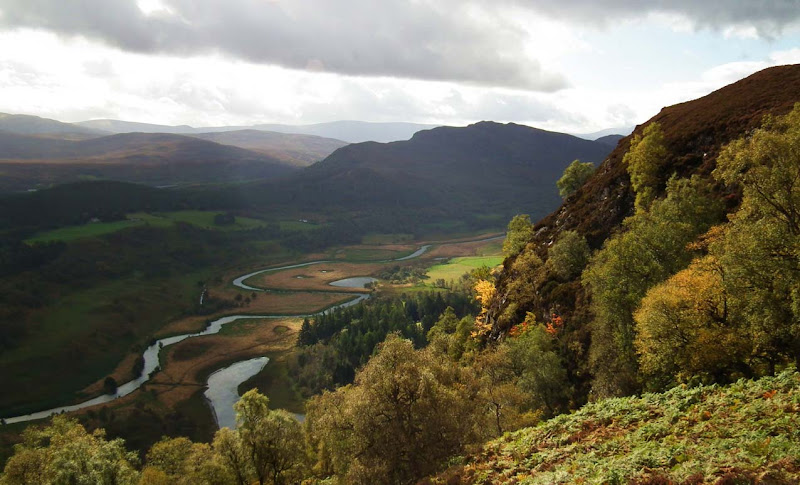 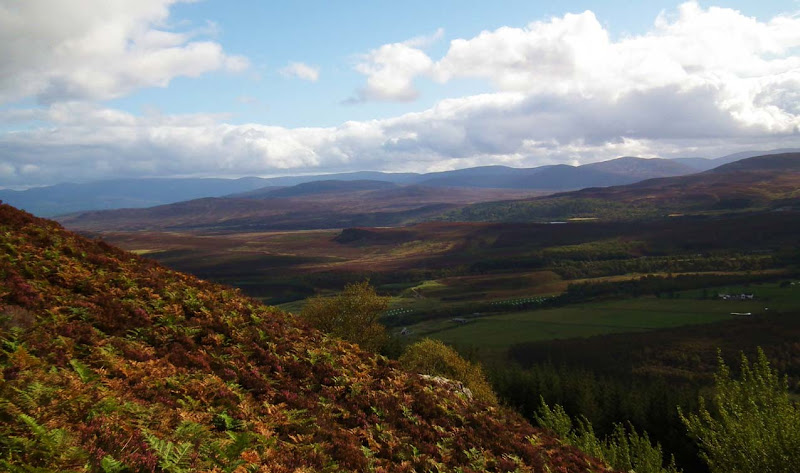 We reached the more even ground eventually and spent a few minutes wandering along the fence looking for a stile which we knew was supposed to be there somewhere... When we found it, Kevin took some photies standing on it 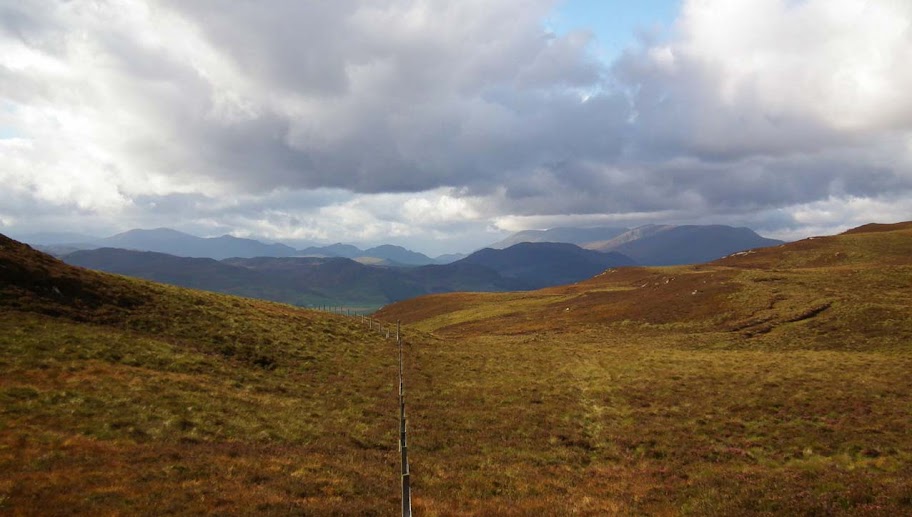 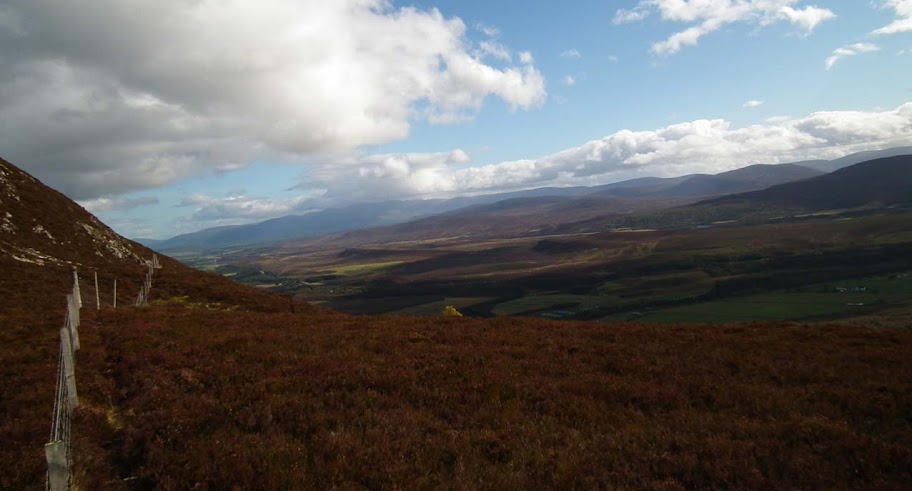 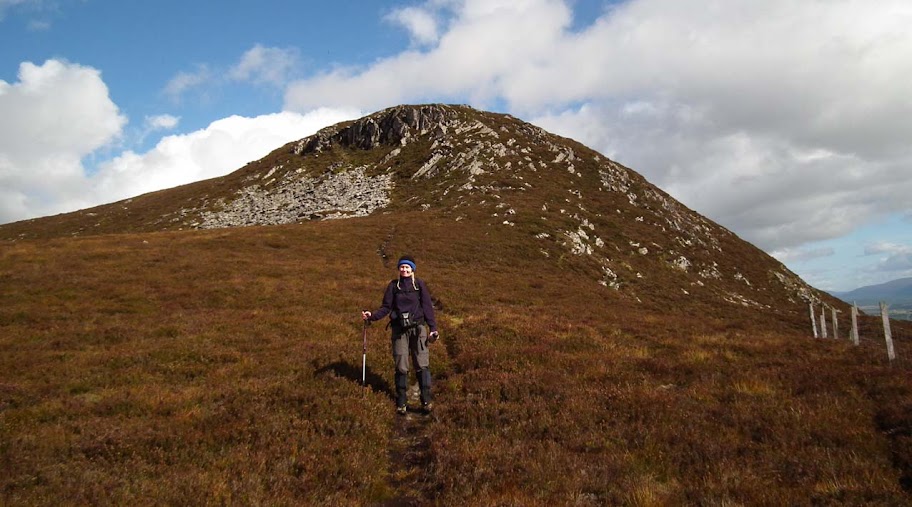 Walking along the ridge over a few "lumps and bumps", with a smile on my face and slight pain in my knee... 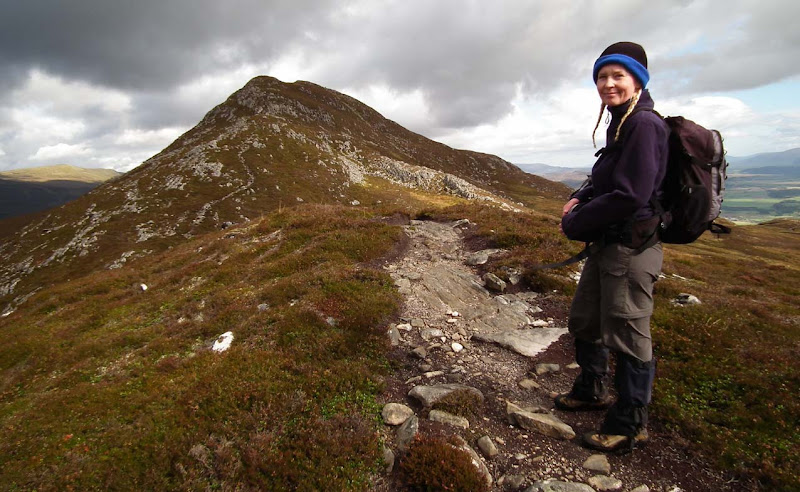 Views were now first class, great panorama of the Monadliath: 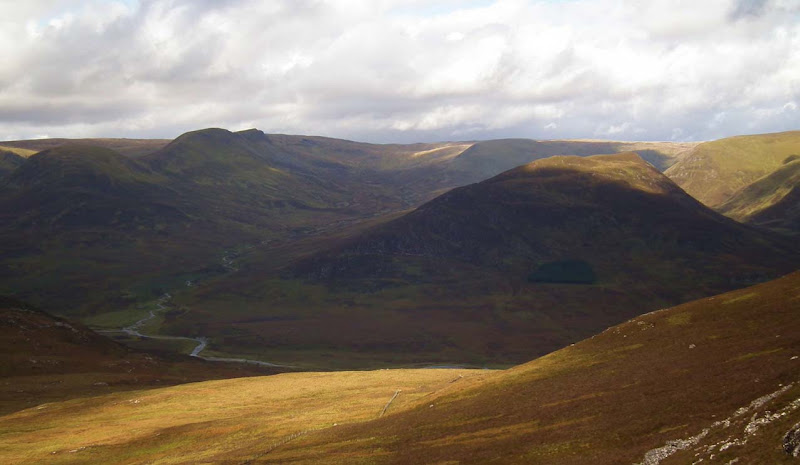 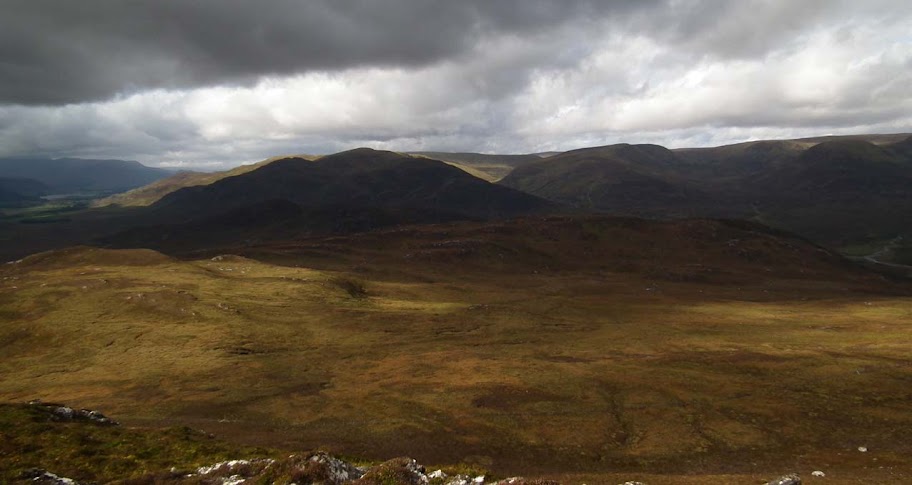 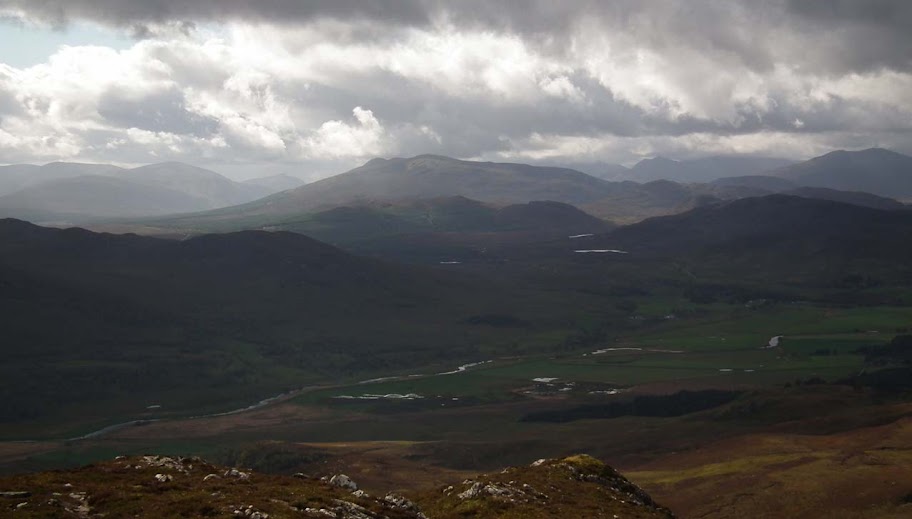 The summit has two cairns, the first one false: 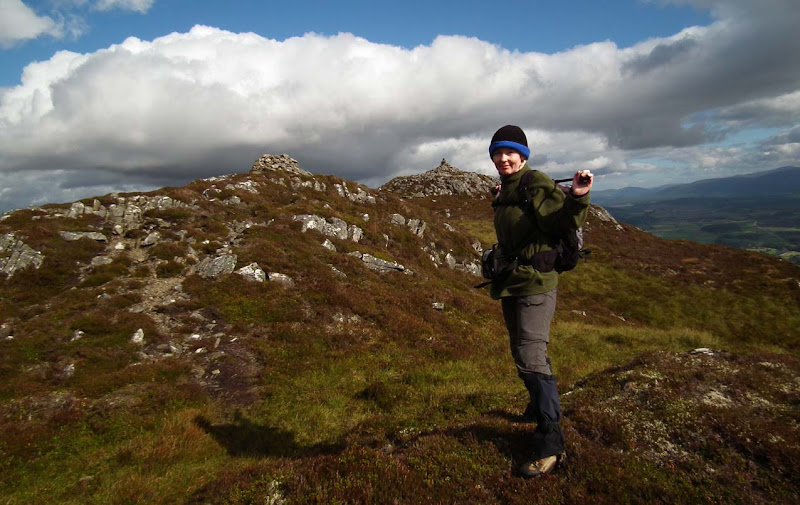 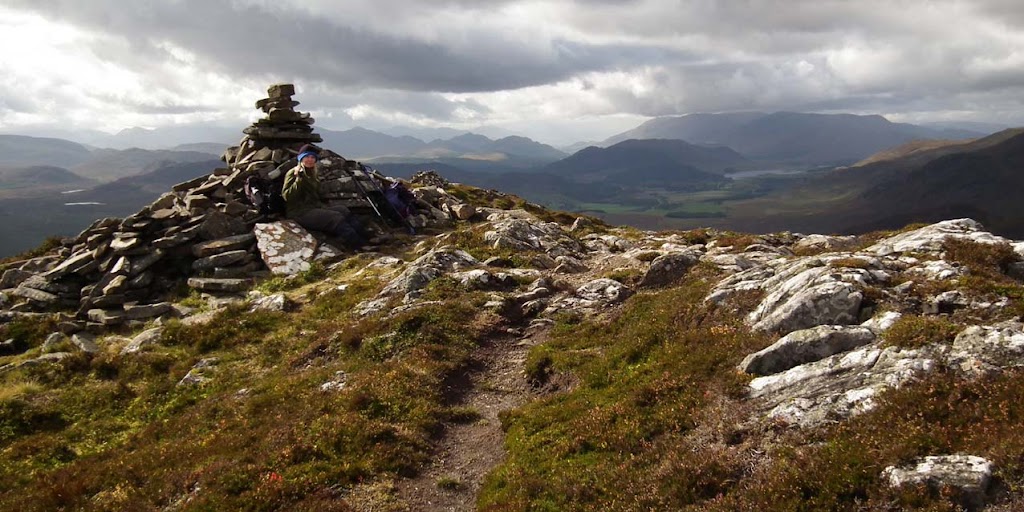 The false cairn from the main summit of Creag Dhubh: 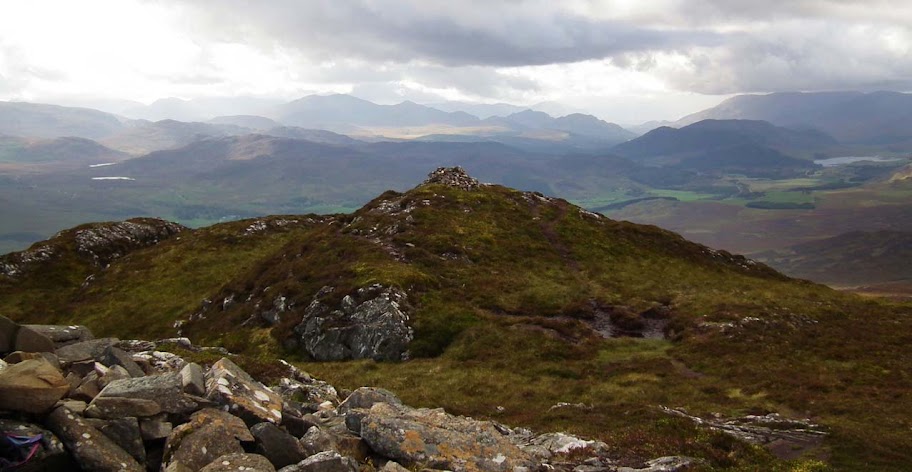 It was windy on the top but we still enjoyed the scenery. Grand views down to Newtonmore, for example... 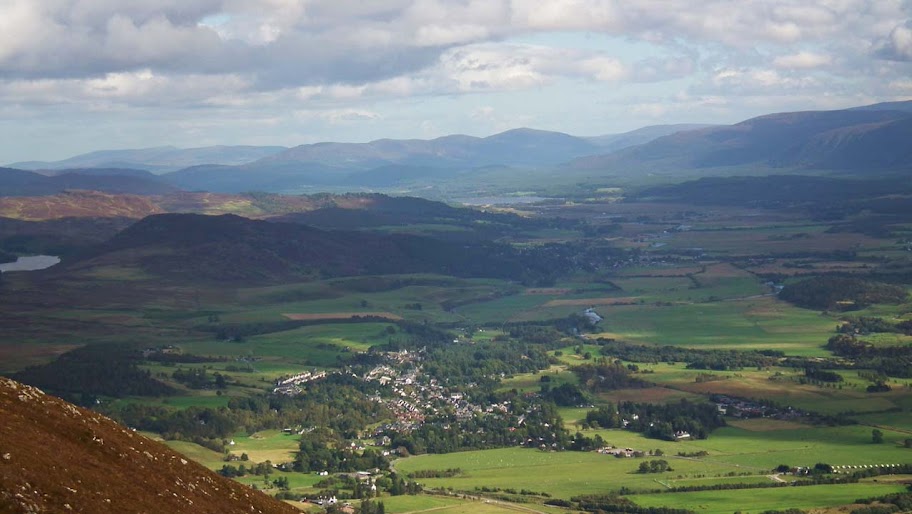 The sky still blue but not for long... 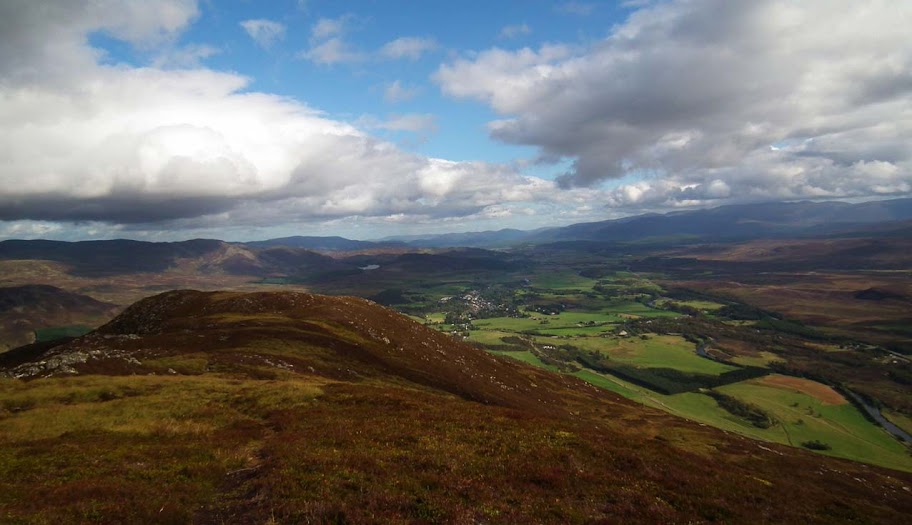 Looking south-east from the true summit: 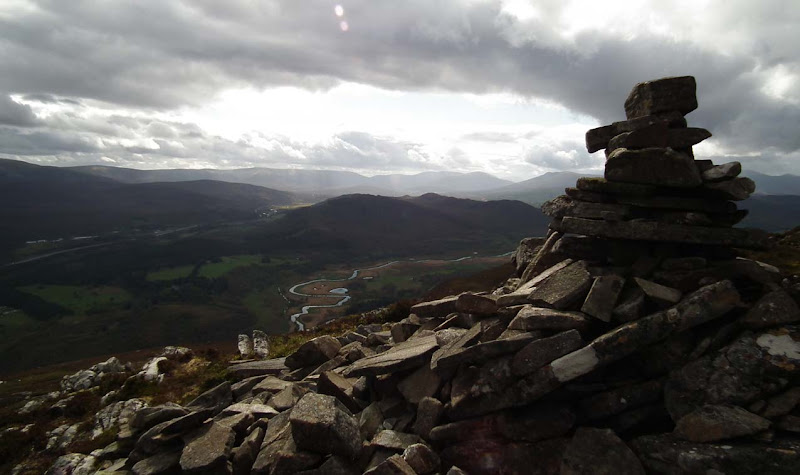 To the south-west, meandering River Calder: 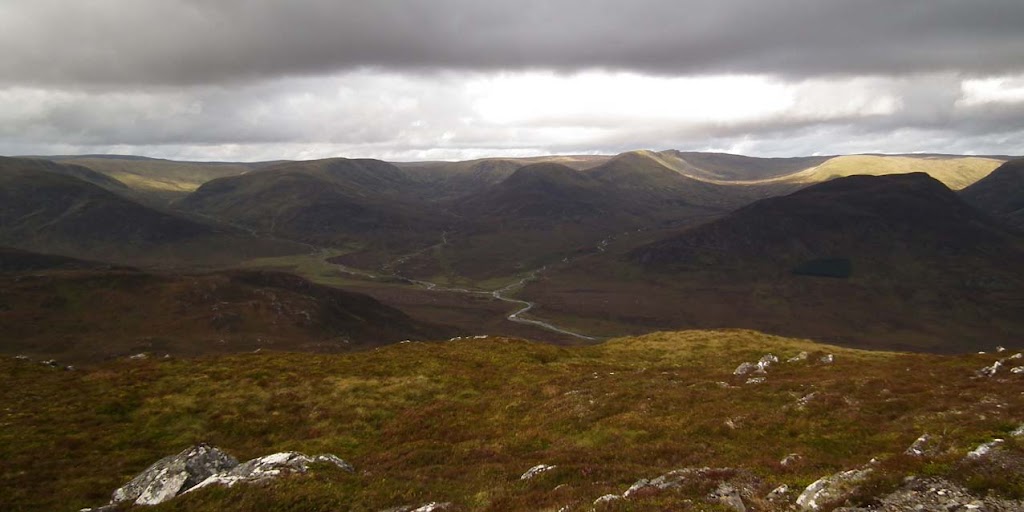 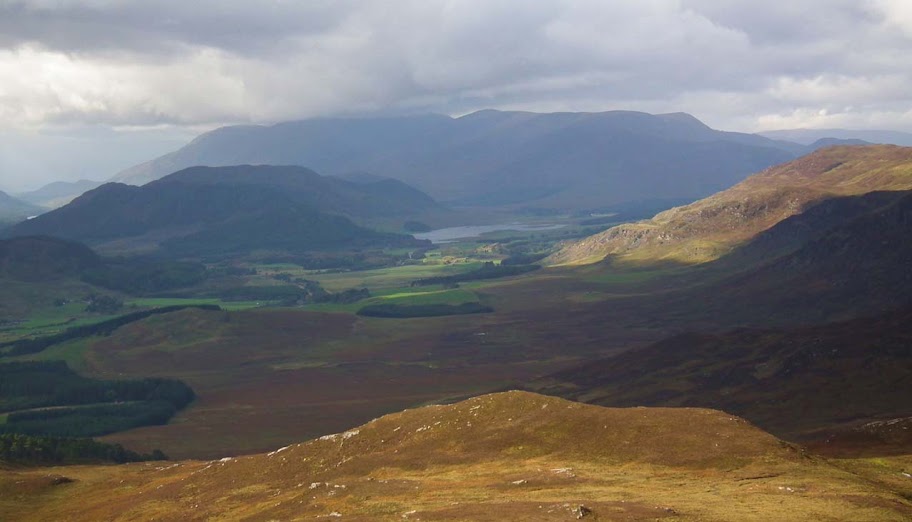 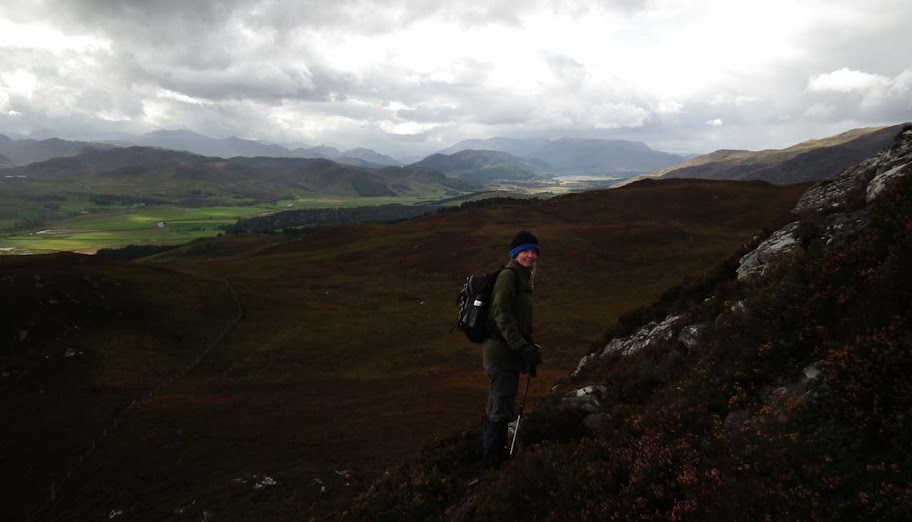 For a descent route we decided to give the steep bracken-covered slopes a miss and instead we walked further along the ridge, aiming for a smaller hill with a monument on top. Lower down the ground became wet. We spotted a few frogs and this little guy, a dragonfly nymph:

The vertical slopes of Creag Dhubh seen from the south with Lochan Uvie and River Spey to the right: 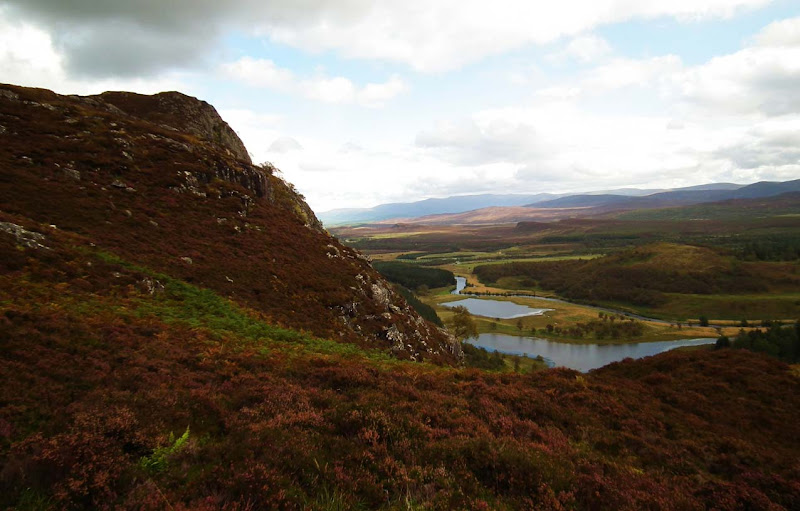 The final descent was through birch woods again, some more boggy ground and eventually we landed by the fence, found a gate and the rest of it was easy

Nowe we were in the shadow of the rocky wall: 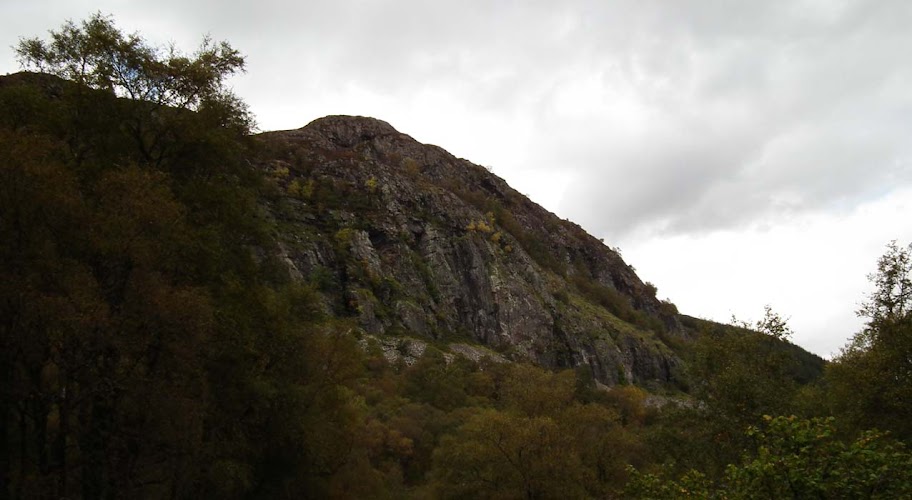 An interesting place for a waterfall: 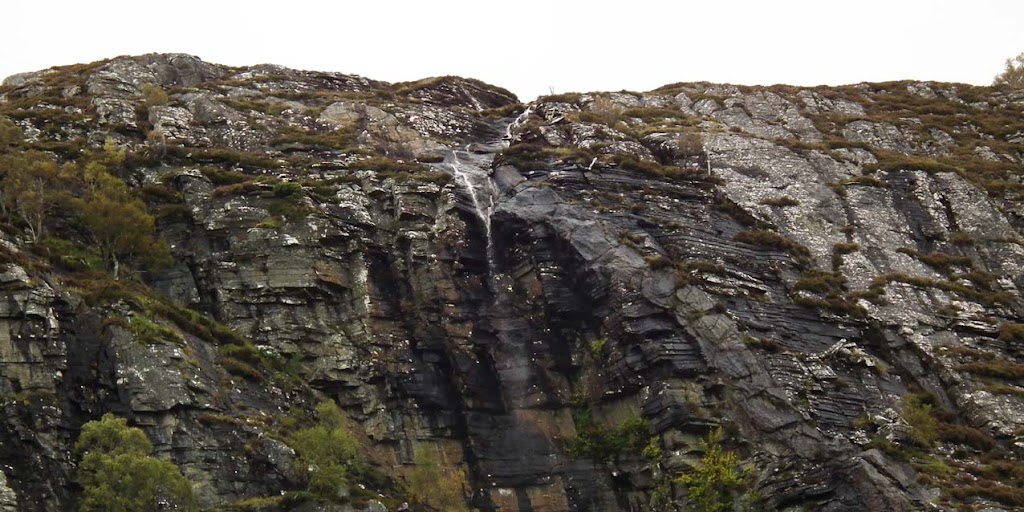 The track we picked just past the gate took us down to A86, only a few hundred meters from the car park. Weather was still OK regardless of the overhanging cloud and I was so glad we took another break in refurbishing!
Sadly, my right knee didn't share my enthusiasm

Since the slip on the slopes of Creag Dhubh it's been a bit sore all the time, especially upset by the descending movement. During our next expedition two days later it wasn't much of a problem, but the pain culminated on Wednesday when we tackled Ciste Dhubh... But it's a subject for another story.
Apart from sore knee I also brought back a big, fat tick. Luckily it was noticed and removed almost immediately, but I was surprised to see one so late in the year...

Please, don't feel discouraged by my description - this hill may be steep, may cause injuries, but it's a fantastic treat for any mountain-hungry creature, not only a cat. Meow!

You have certainly been busy of late ,with your little 'out an about' posts

Just wish I could be the same, off work with torn muscle/tendon in right calf

Creag Dhubh may only be a Graham but it's a fine looking hill and a fine report you have done it, i allways intend to climb it when i'm up at Newtonmore but not got round to it yet but will soon after seeing your report. Cheers

BlackPanther wrote:Creag Dhubh may just be a Graham, but it always drew my attention each time I drove past Newtonmore

Ditto. One day I'll actually stop and give it the credit it clearly deserves! Thanks for the report. Can't say I've seen too much info out there on this one.

Lovely report! I remember eyeing this up when camping at the site close to the A9 just to the South a couple of years back.