After Saturdays jaunt up Creag Dhubh and some more "homework" on Sunday, Monday looked promising so it was time for another adventure - and a Creag one again. Creag Mhor, to be precise.
This Cairngorms Corbett's a peculiar mountain to climb if you're planning it on its own. The easiest approach is from Glenmore - over 12 km. For multi-top collectors (

) the best way would be to combine Creag Mhor with it's Munro neighbour, Bynack More. But as we both have climbed the latter one before (me once, Kevin twice), we decidied to concentrate only on Creag Mhor this time.
I had an opportunity to photograph this hill a few days earlier from the summit of Geal Charn. It didn't look too impressive, overshadowed by higher mountains... But again, my logic switched on: this particular route is a bit too long for winter days and during summer time, if good weather kicks in, I'd rather plan something more challenging, like Cairn Toul & Devil's Point traverse (which we had planned for this year and never got around to doing). Following my strategy, it leaves Creag Mhor for autumn. Well, logical thinking worked this time (my ears are still small, though... must check my blood, maybe it's turning green?). The day turned out to be rather windy but the gusts weren't too cold, so we spent nice 6 hours walking in the Cairngorms.

our_route.gpx Open full screen  NB: Walkhighlands is not responsible for the accuracy of gpx files in users posts
The obvious place to leave cars is by Glenmore Lodge. I remembered from my two previous visits that the car park at the end of the public road fills up very quickly. Last time, when we walked the same way to climb Bynack More, we had to park down in the village, which makes this walk about 2 km longer. As timing was important, we left Beauly early in the morning and... yuppie! there was still space to park by the lodge.
The first stage of this long route goes through pleasant woodlands and on good forest tracks: 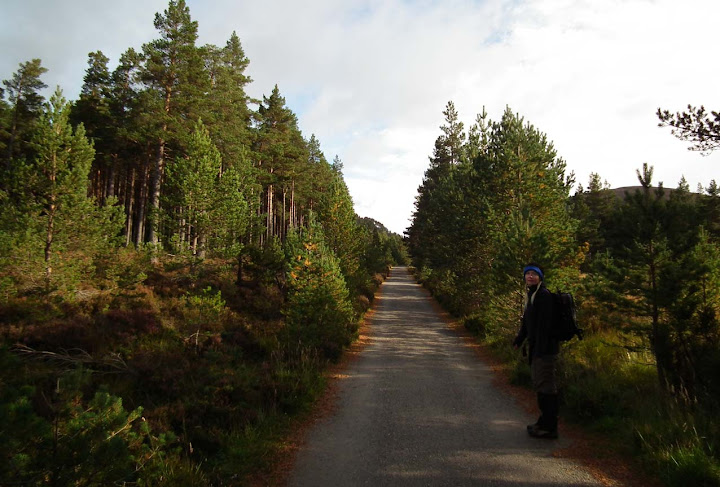 Visiting Lochan Uaine on the way is an absolute yesss! yesss! 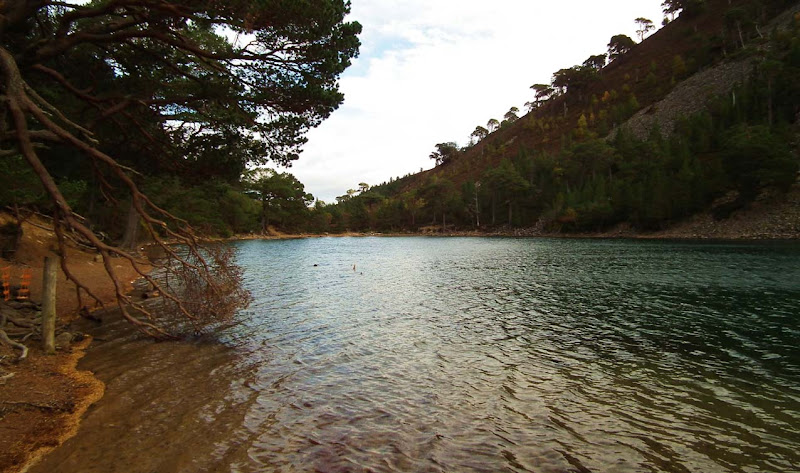 This little loch's unusually turquoise waters are said to be visited by fairies... 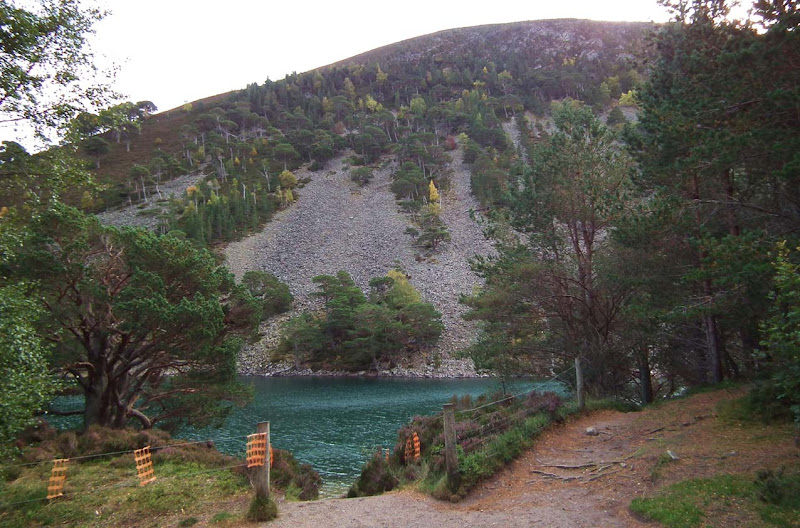 Past the lochan and out of the woods, we continued along the track through the Ryvoan Pass to where the path forked. We turned right (signposted for Braemar), leaving behind the round shape of Meall a Bhuachaille: 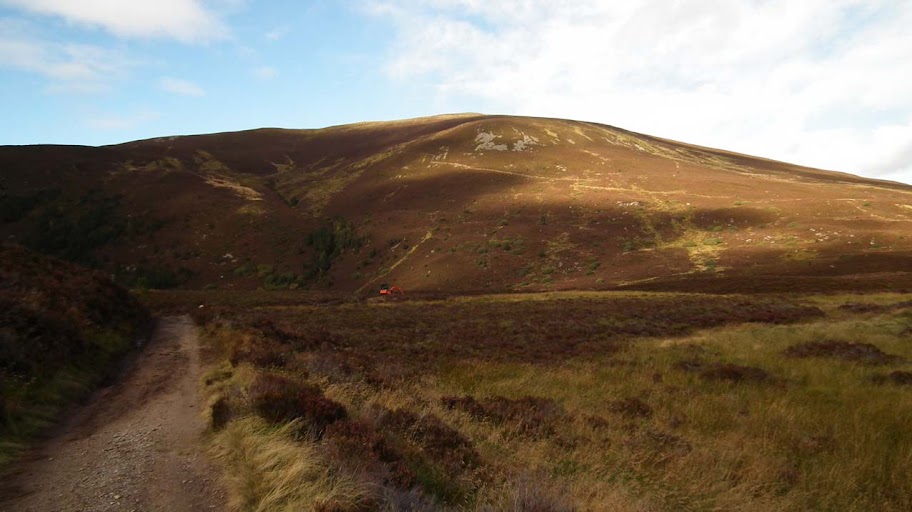 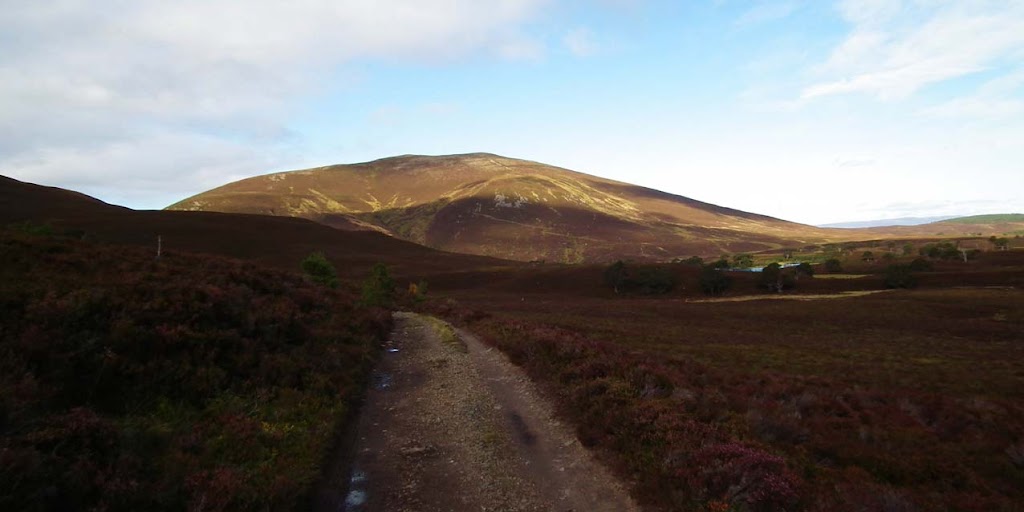 Some moody sky still on the south-western side but clouds were moving fast in the wind and we kept fingers crossed for some blueness... 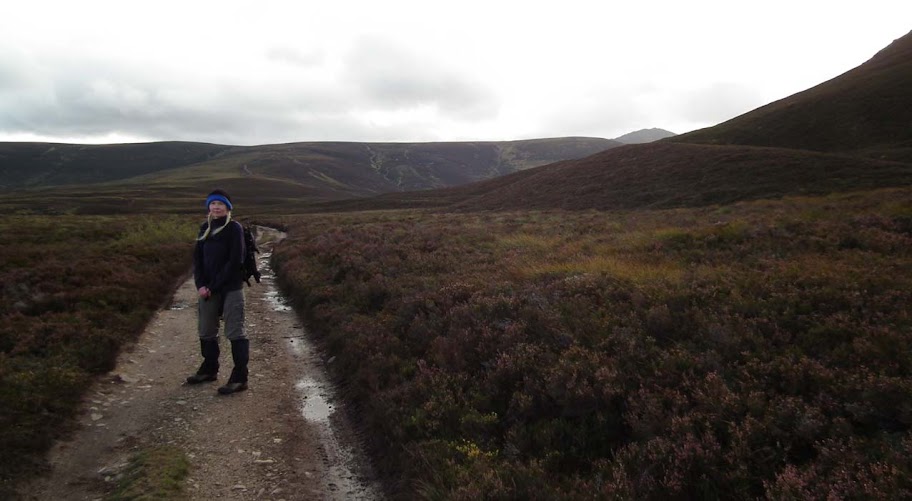 After a couple of kilometers we reaches a bridge over the River Nethy; here we took some time for posing: 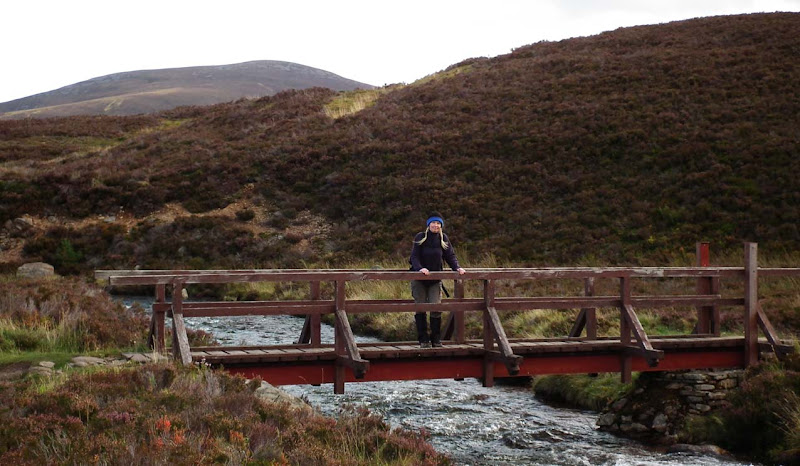 After crossing the footbridge, the path was well-constructed as we climbed the shoulder of An Lurg. Halfway up the slope we met workers upgrading the path - still a long way to finish but I'm glad something is being done to this pass. From my previous experience I remembered this bit to be very boggy, now it's a pleasure to walk on it 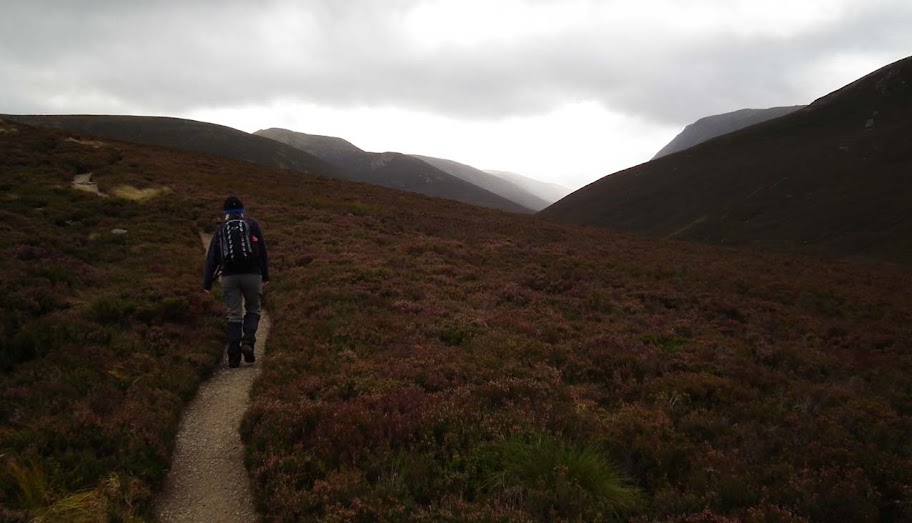 From higher levels there are good views north... 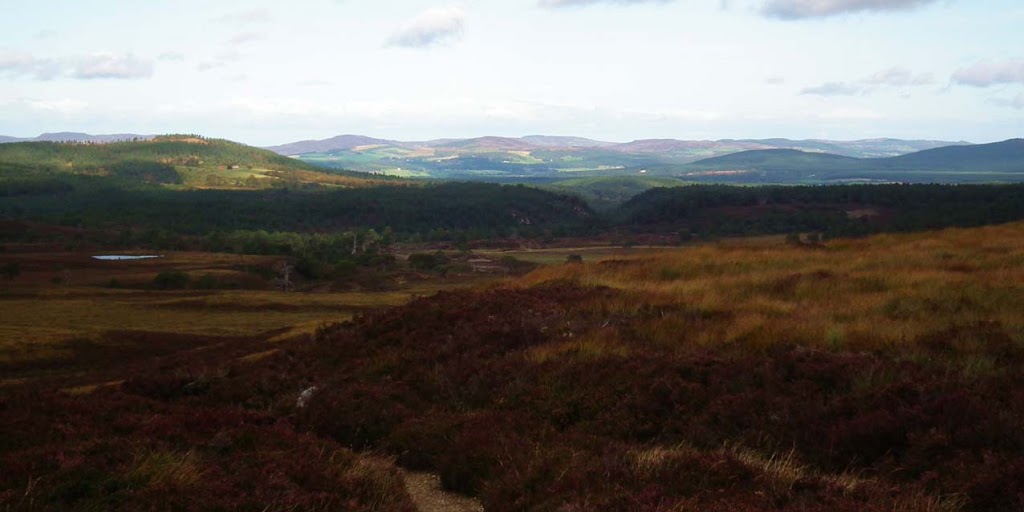 ...and towards Strath Nethy: 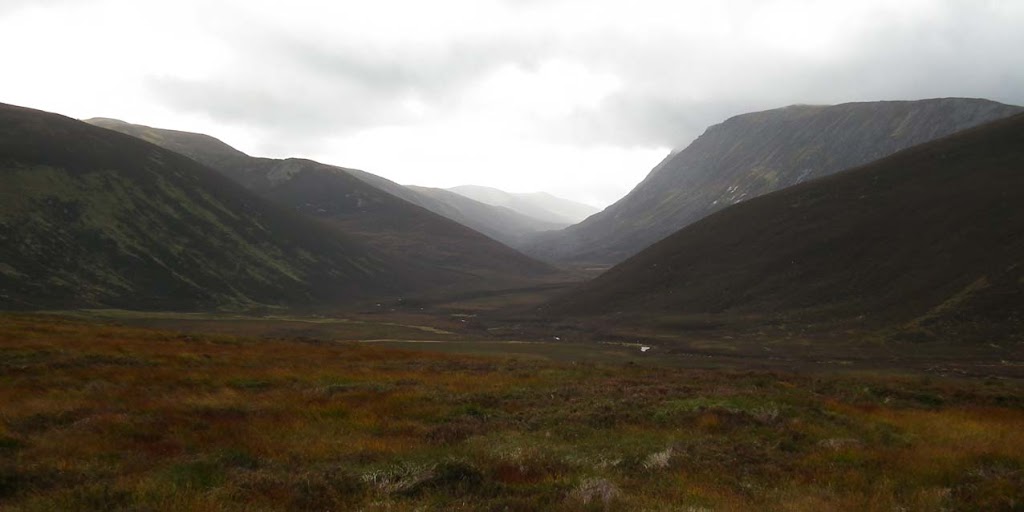 The path seemed to be a neverending story: 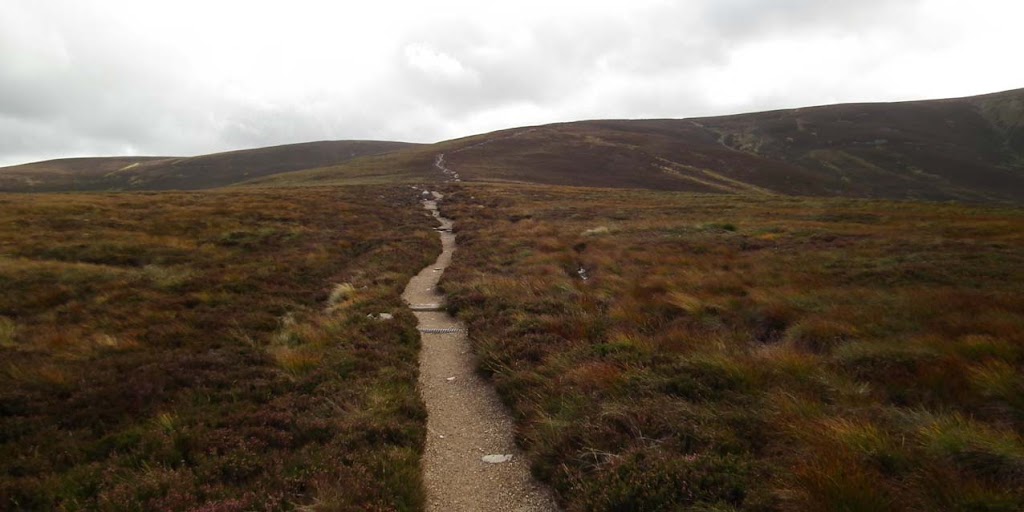 Better weather arriving from the west: 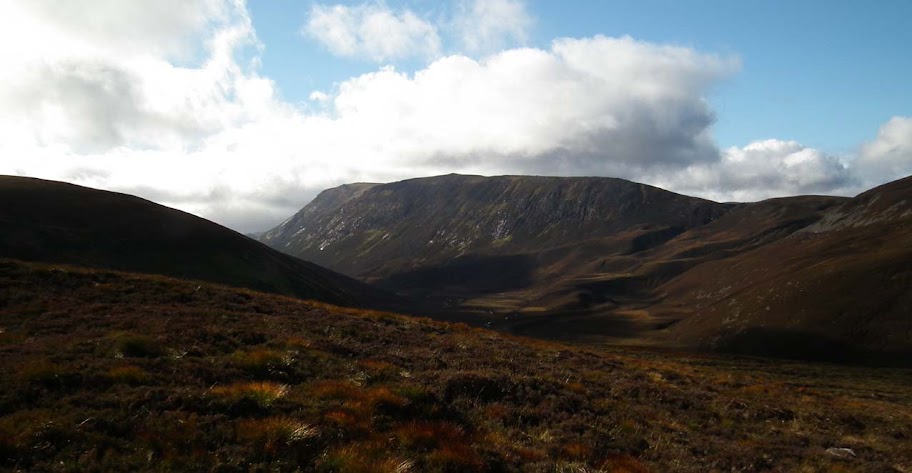 A glimpse back at Meall a Bhuachaille: 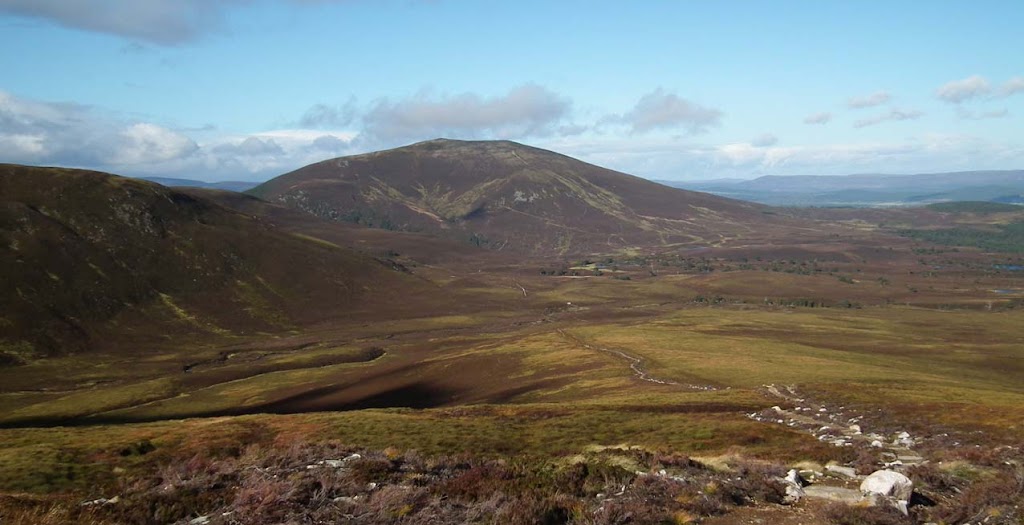 As we carried on walking, the shapely dome of Bynack More soon came into view: 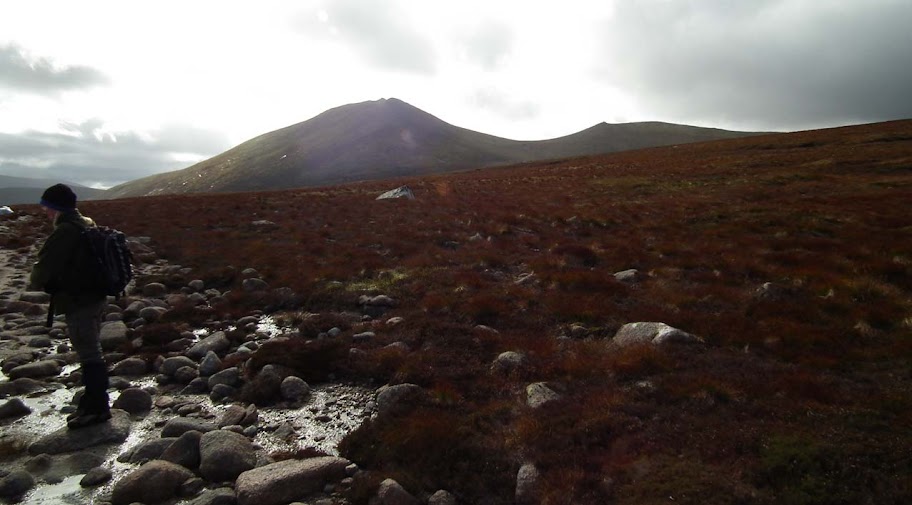 And so did the big bulk of Ben Avon: 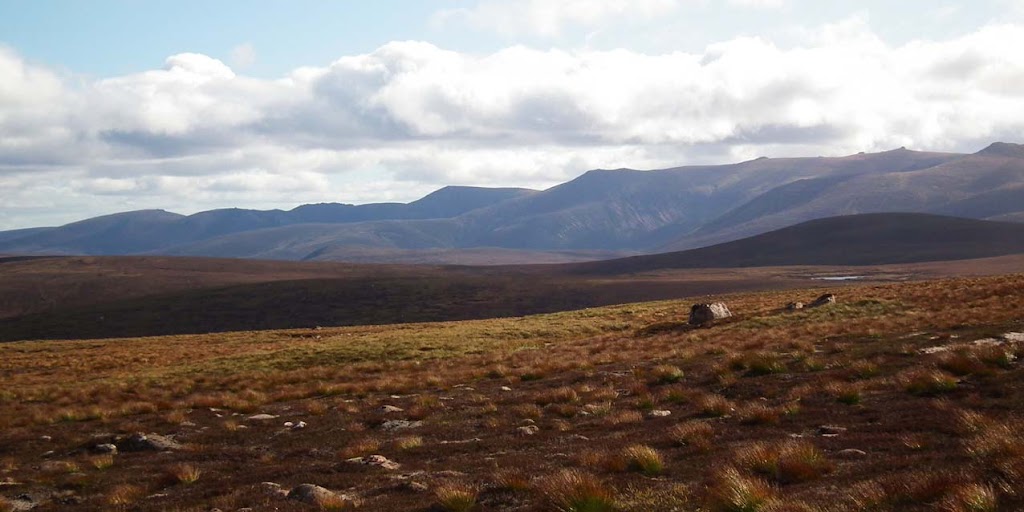 We walked past the path branch heading for the summit of Bynack More and soon we saw our target hill for the first time - it looked so small and undistinguished... So I tampered with the photo a bit just to make sure it becomes clear which bump in the background is Creag Mhor: 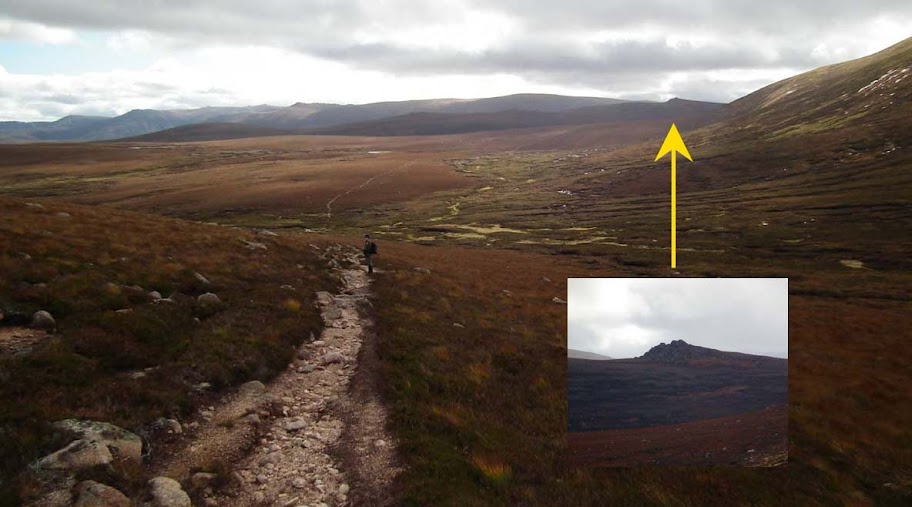 The next hour or so was spent walking down along a rather wet path through Coire Odhar, crossing a couple of streams and climbing up again to another higher pass. At this point we were close enough to admire the rocky outcrops of our target Corbett... 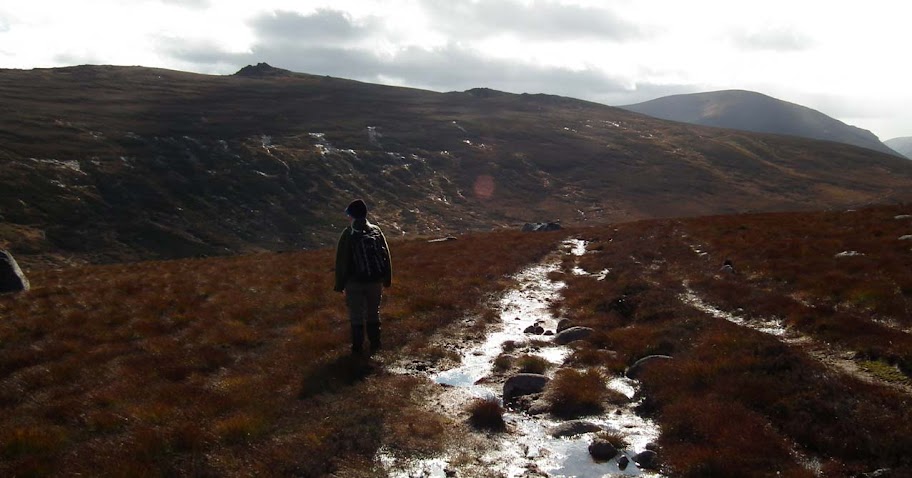 ...and we cought first sight of the famous Barns of Bynack: 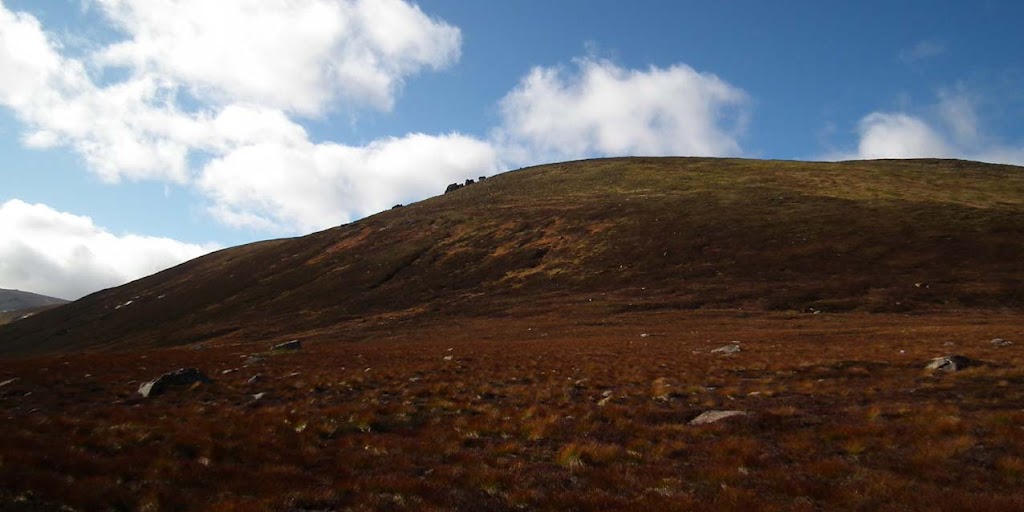 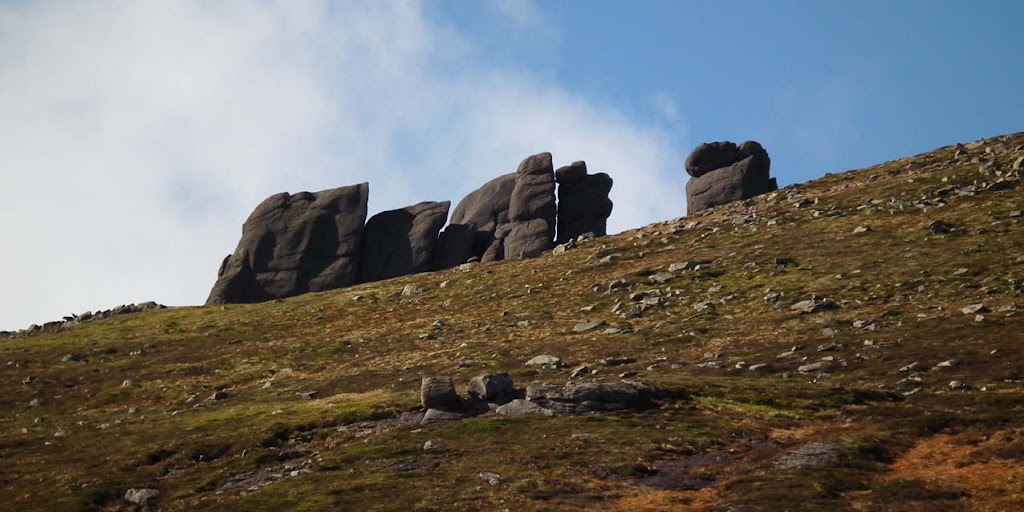 Finally, we walked across one more dip in the ground, crossed Glasath and climbed the final steep-ish slope of Creag Mhor. The ground was grassy and rather wet, with wind becoming more unpleasant as we gained height, so we were happy to reach the summit: 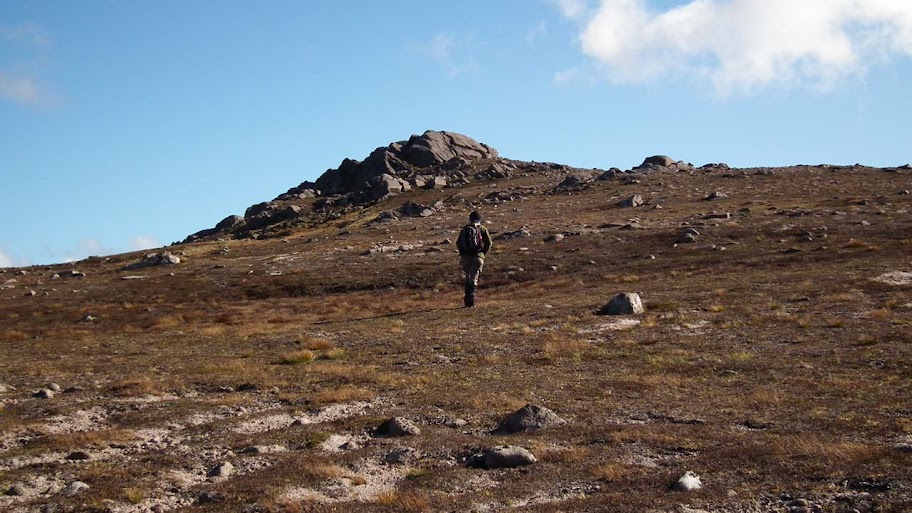 There is in cairn or trigpoint, just a big bulky rock formation marking the top of Creag Mhor. I couldn't resist striking a pose for the infamous "me on the rock" album - this time in... hmmm... half-horizontal position: 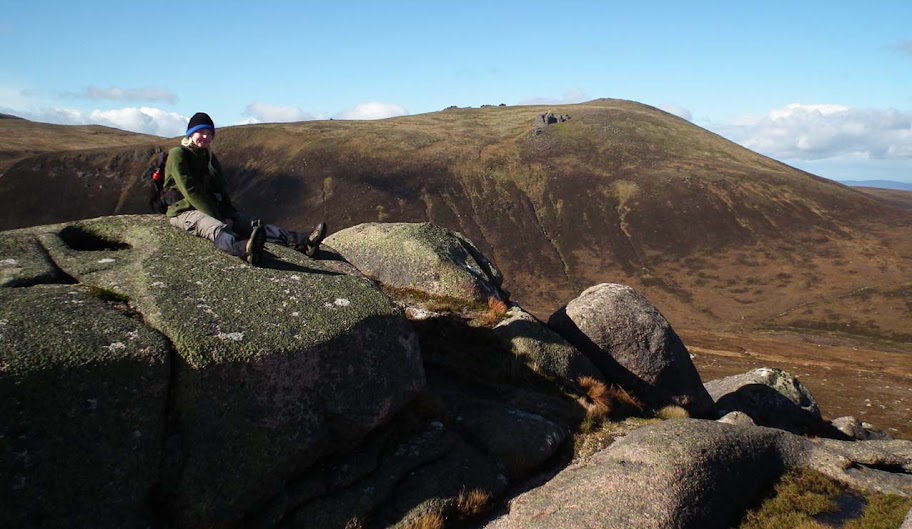 Weather improved significantly although it was still a bit blowy. But the views from the summit exceeded my expectations: 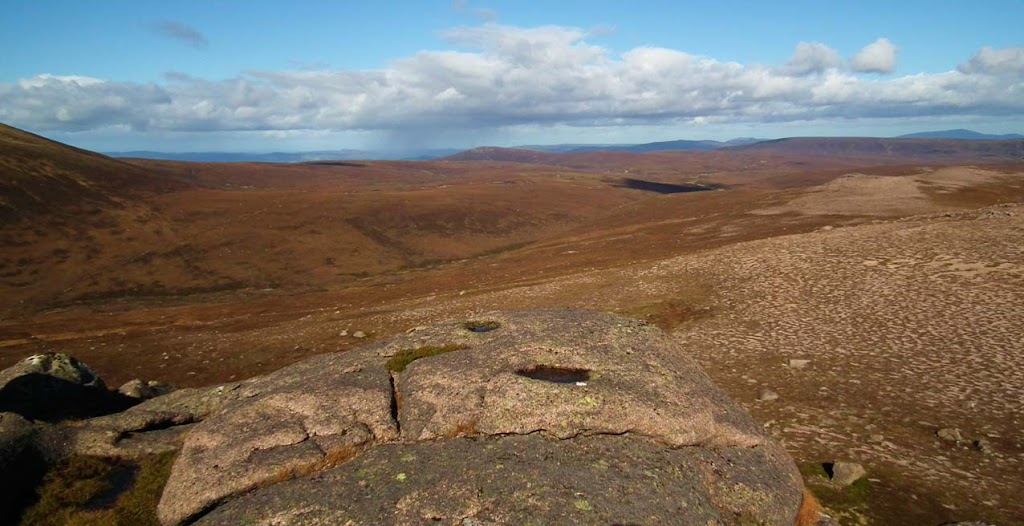 To the very left, Ben Rinnes, I reckon? 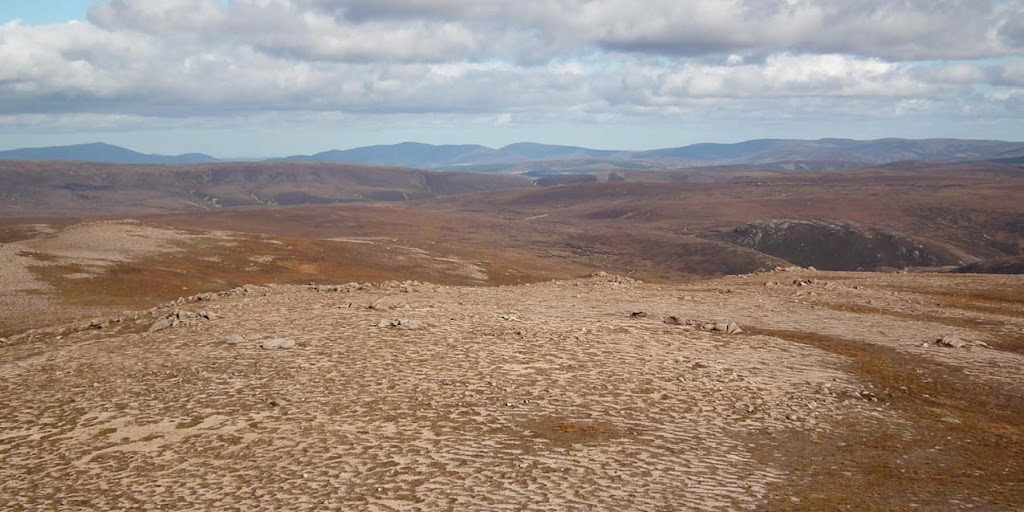 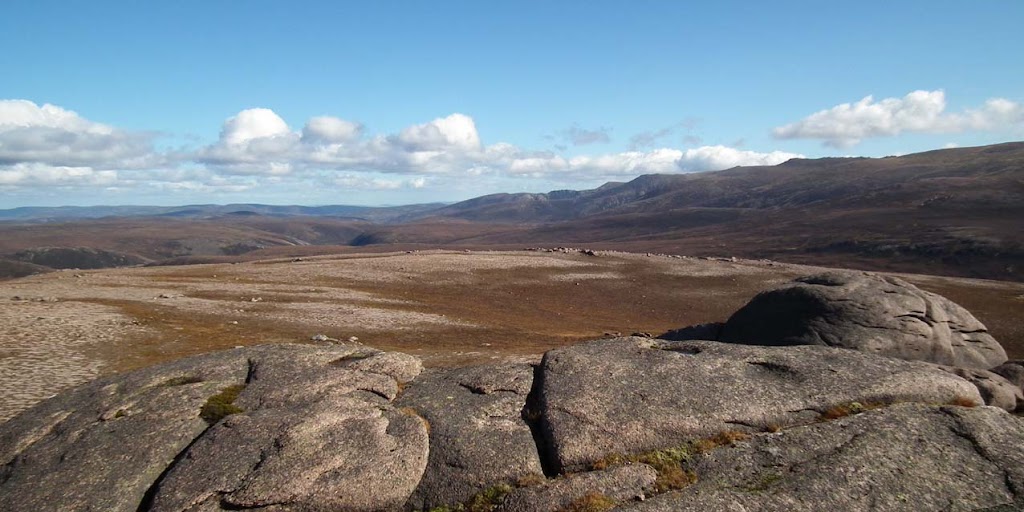 ...and south to Beinn Mheadhoin: 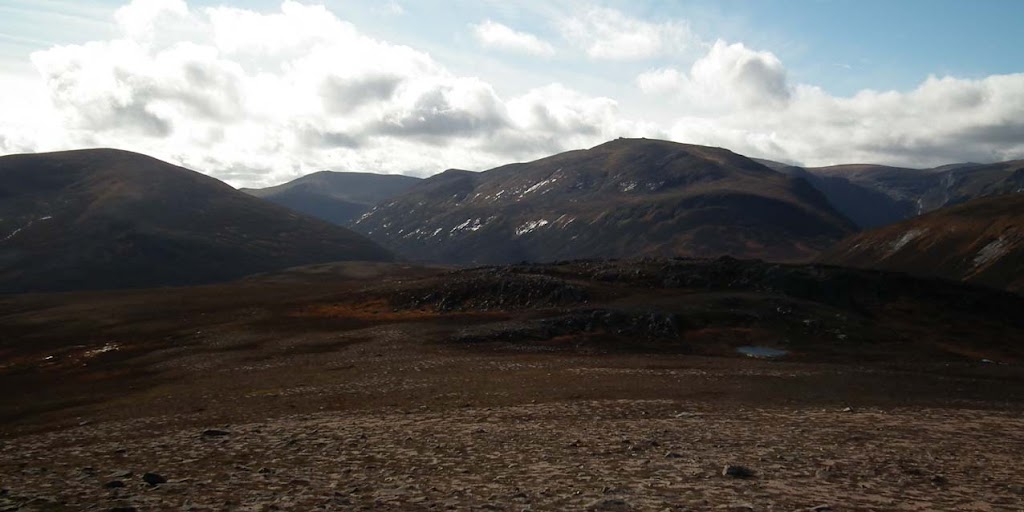 Get down, Kevin! It's a mountain summit not a playground! 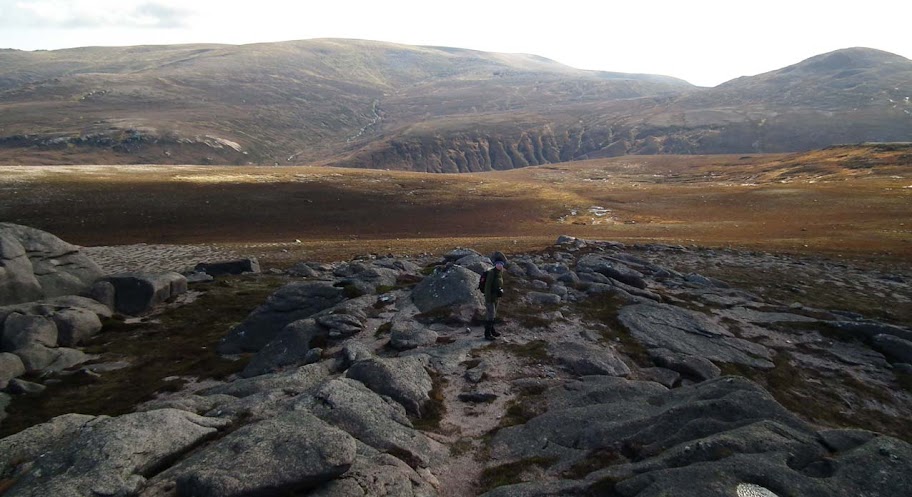 Another glimpse to Bynack More: 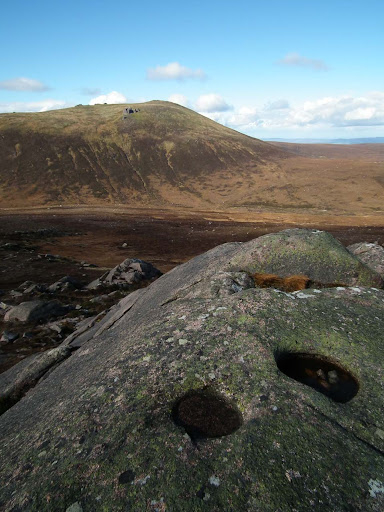 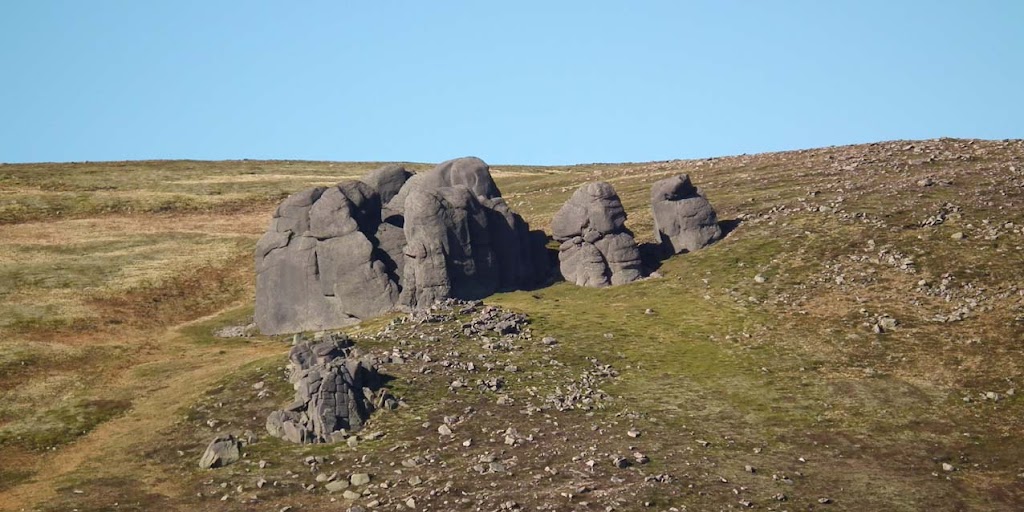 Eventually we moved on and walked down the slope, soon joining the walk-in route. On the way back we didn't take many pictures, simply enjoyed the lovely scenery...
Kevin posing with Creag Mhor: 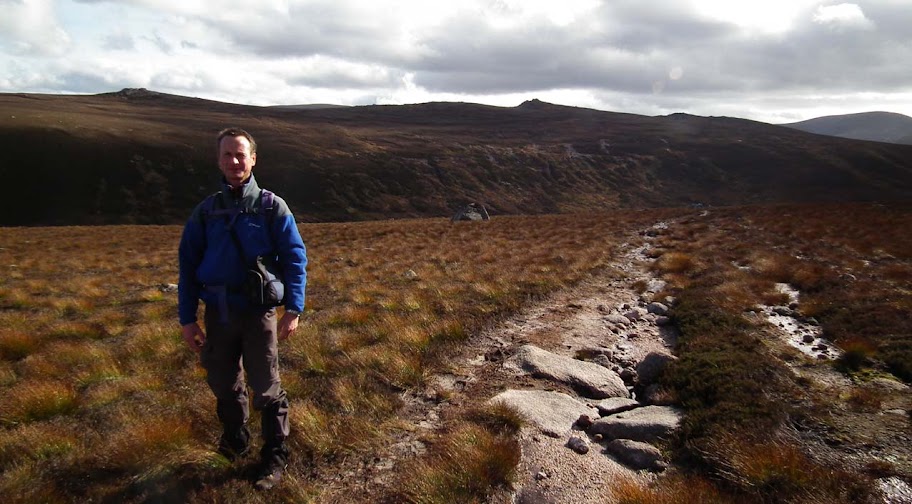 SMC Guide to Corbetts gives a time of 4 hours to reach Creag Mhor from Glenmore Lodge. We managed it in 3hrs 20min, no problems at all - it proves that this Corbett can be easily added to Bynack More traverse.
Maybe half-way back I started feeling slight discomfort in my right knee, the one I bumped so painfully on Creag Dhubh. It wasn't so bad as walking in the Cairngorms does not require too much steep descending so I simply ignored it and thought - logically if I give it a day rest I should be fine. The logical thinking wasn't 100% correct this time and I suffered during our next trip (grrrrrrrrrrrr

).
In the final part of my September out-and-abouts I will take you to the summit of Ciste Dhubh, so get ready to fasten your seat belts - the greatest adventure has just begun...

Couldnt see zilch around this area when i was up Bynack More last year. Like the cheeky wee yellow arrow pic

A great WR on one of my favourite walks (Bynack rather than the corbett). Thanks and well done BP (and K)