Being close to Wales for a change, I thought I'd nip back to see my parents for the weekend. I also had some decent hills planned, as a sort of precursor to the Snowdonia meet in a couple of weeks. The weather didn't really play ball though, so I stuck to lower hills instead, heading out with my mum on Saturday and both parents on Sunday. I have put both of these days in a single report as they barely merit separate ones.

Saturday dawned disgustingly grotty, and I didn't haul myself out of bed until after 10am. My planned route in the Carneddau was off, as the cloud level was down to about 100m. Instead, I set off mid afternoon to do Moel y Gest with my mum. This is a rather rocky Marilyn near Porthmadog, apparently with great views, and also would have been a new summit for me. We soon changed our plans though, as it didn't look to be worth the drive, and the weather was due to be marginally better to the east. We opted for a circuit on the hills above Penmaenmawr instead.


Lus.gpx Open full screen  NB: Walkhighlands is not responsible for the accuracy of gpx files in users posts

Setting off from the center of Penmaenmawr, I entrusted the finer points of navigating the back streets to mum. Despite having done the route a few times, she was confused, and we went up and down the same streets a few times looking for the footpath. It finally appeared, in a place I was sure we had looked before

A steep climb through a field and past a farm took us onto more open hillside, where the path was obvious. Unfortunately, the rain worsened at about 300m and we disappeared into the mist. I'm not sure how we found the stone circle, as the hillside roundabout was pretty featureless, but eventually we stumbled across it. It was so miserable that I had put my camera in a plastic bag in my rucksack, so no photos yet.

Joining a farm track which crossed the moorland past the remote cottage of Bryn Derwydd, the weather began to clear a bit. The wind also picked up, but we found a spot near the top of the public road to sit and have a break. Previously, we had been planning to head straight back to the car, but I suggested a quick ascent of Moel Lus. Considering it doesn't feature on any lists, and was a good 40m lower than the stone circle we had just passed, it is a surprisingly prominent hill, well seen when driving along the north coast. I have vague memories of doing a fell race up it as a teenager. An easy path led us onto the summit, which was well worth it for the views over the Great Orme, Anglesey and the Conwy Valley. Even the 610m high Tal y Fan to the south cleared itself of cloud. 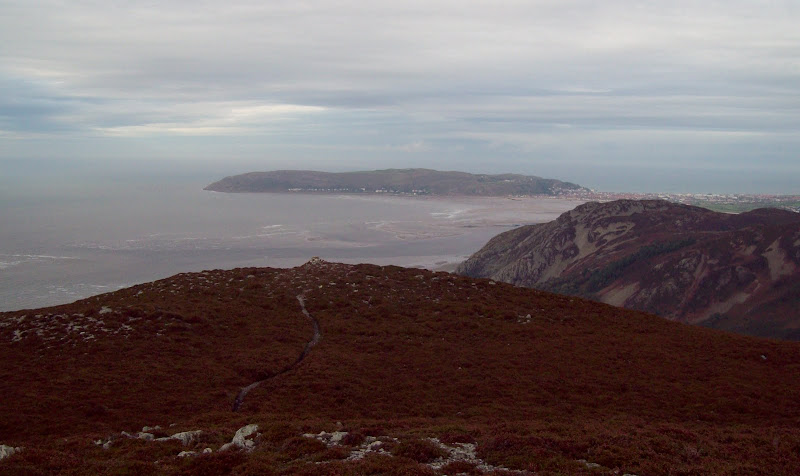 East to the Conwy Valley: 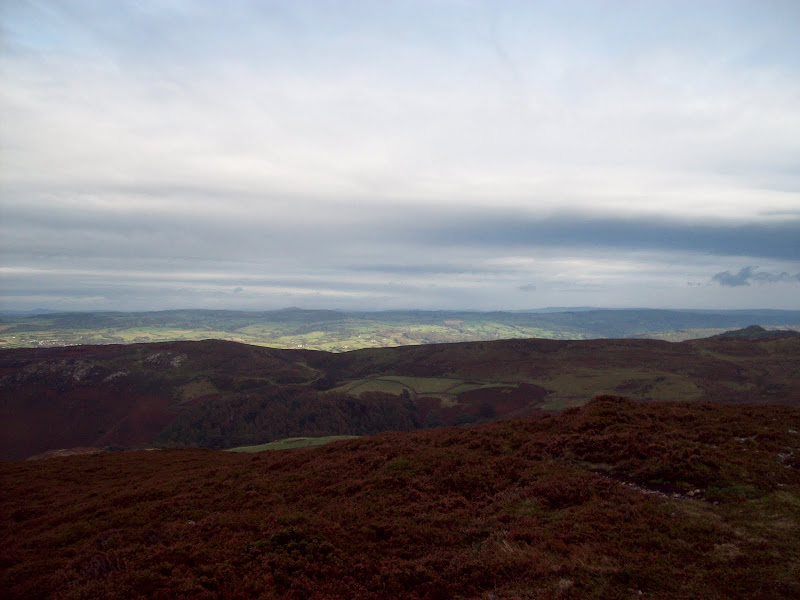 Penmaenmawr and Anglesey in the background: 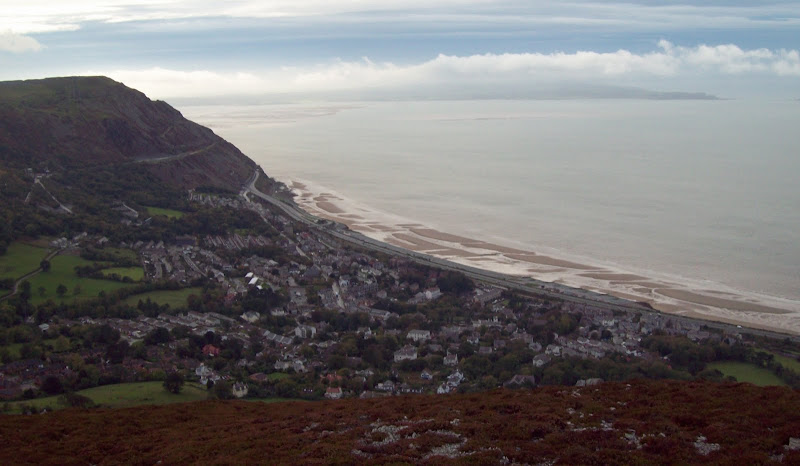 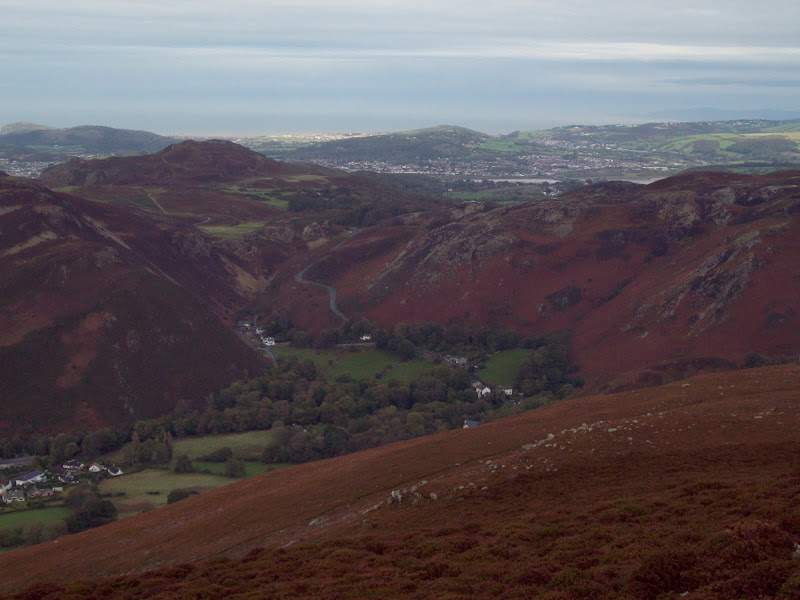 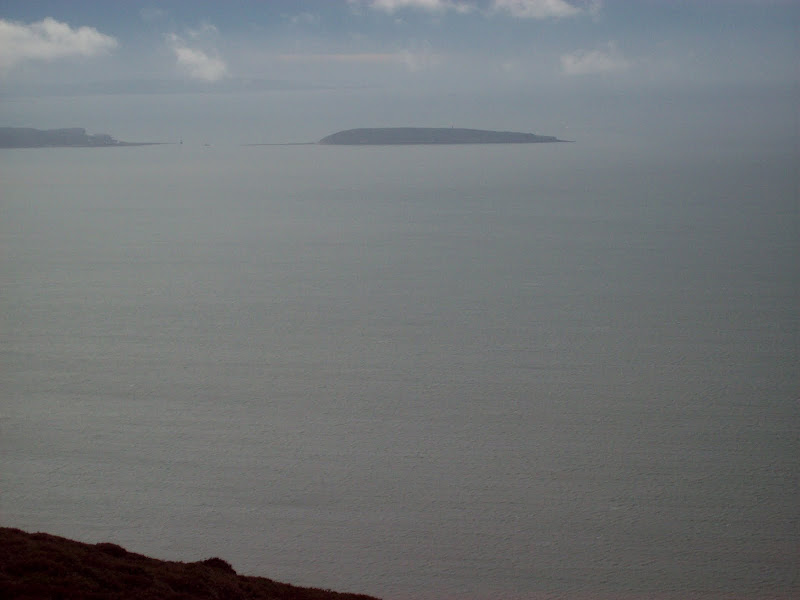 It was a great spot to view some of the northern foothills of Snowdonia (particuarly as most of the higher hills were in the clag), but the wind had us heading down before long. There is a road all the way back down to Penmaenmawr, but we followed a couple of footpaths which took shortcuts between the zigzags of the road. All in all a much more successful day than expected.

On Sunday, I got up late again as the weather wasn't a great deal better than the previous day. My dad and I were both after a bit of a leg stretch, but didn't fancy walking in the mist for hours on end, so settled on Moel Cynghyrion, a northwestern outlier of Snowdon, and a hill I had only done a couple of times in the past. Mum also decided to join us, and we made a fashionably late start from the Snowdon Ranger youth hostel (at about 2:30pm

). 10 minutes in, we realised we'd forgotten to pay for the car park, so I jogged back and caught up again.


Cynghyrion.gpx Open full screen  NB: Walkhighlands is not responsible for the accuracy of gpx files in users posts

The cloud was sitting at about 450m, and didn't vary a great deal, so all of the most interesting summits were hidden. There were still some nice views down Llyn Cwellyn to the rocky towers of Castell Cidwm though. 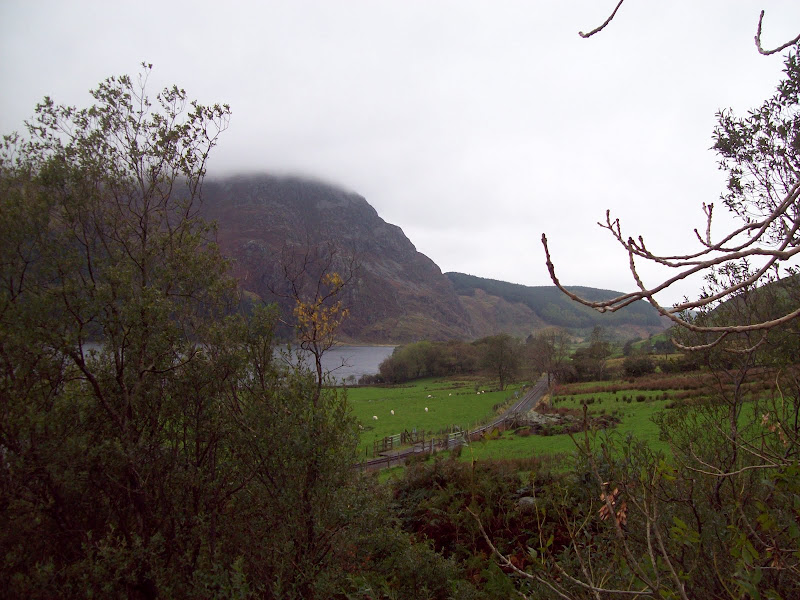 Across Llyn Cwellyn to Y Garn: 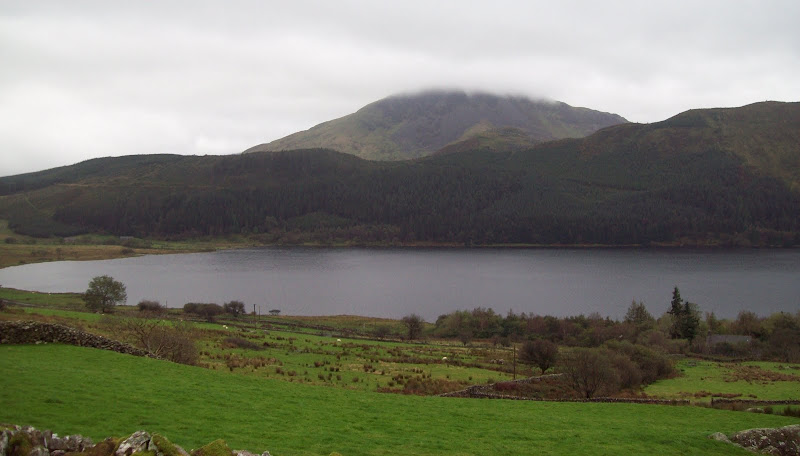 The Snowdon Ranger path is very well surfaced and almost feels like a pavement in places. We turned off it to get to the head of Maesgwm on a much less significant path, from where we hit the W ridge of Moel Cynghyrion. There was a faint path up the ridge, but the turf was so well grazed that it was barely needed. Sadly we hit the cloud here, and any further views (including one that I was interested in - down the steep and craggy north ridge) were obscured. The summit itself is uninspiring in this weather, being flat and grassy, and a meeting of fences. Rather than hang around, we descended the slightly steeper SE spur to rejoin the Snowdon Ranger path. 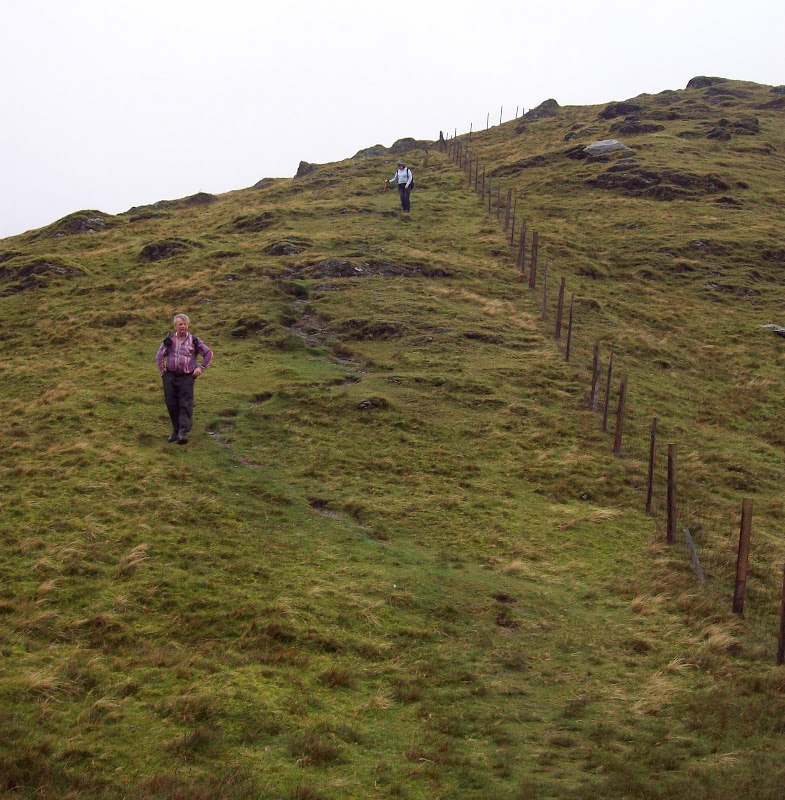 All in all a bit disappointing, as the views had been the same on my previous visits. An oddly ignored summit by me, as I have done the hills either side (Moel Eilio and Snowdon) at least 20 times each.

To get out of the wind, we sat on the NE side of the col overlooking Cwm Brwynog for a break. The most mountainous views of the day were in this direction, the whole eastern side of Cwm Brwynog being a massive pile of boulders - sort of giant scree. Views from here to Clogwyn Du yr Arddu (better known as 'Cloggy' to climbers) would be very imposing if clear. 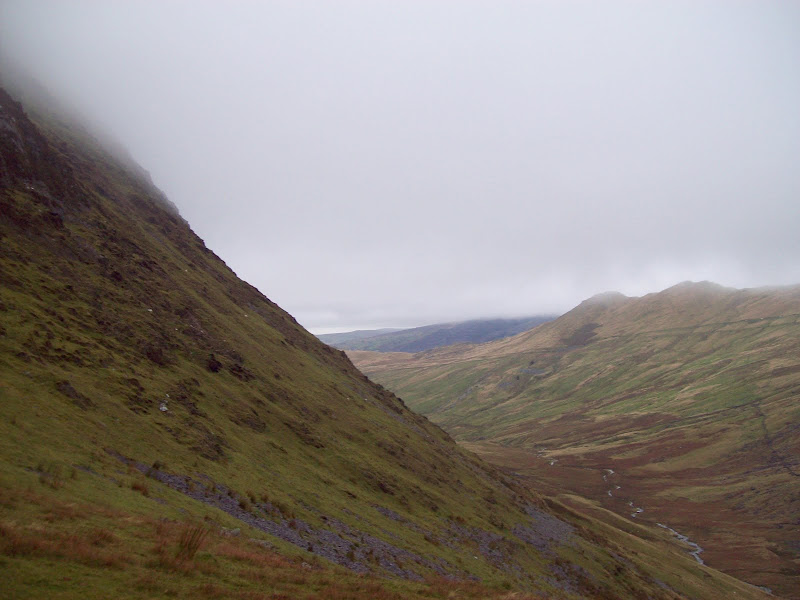 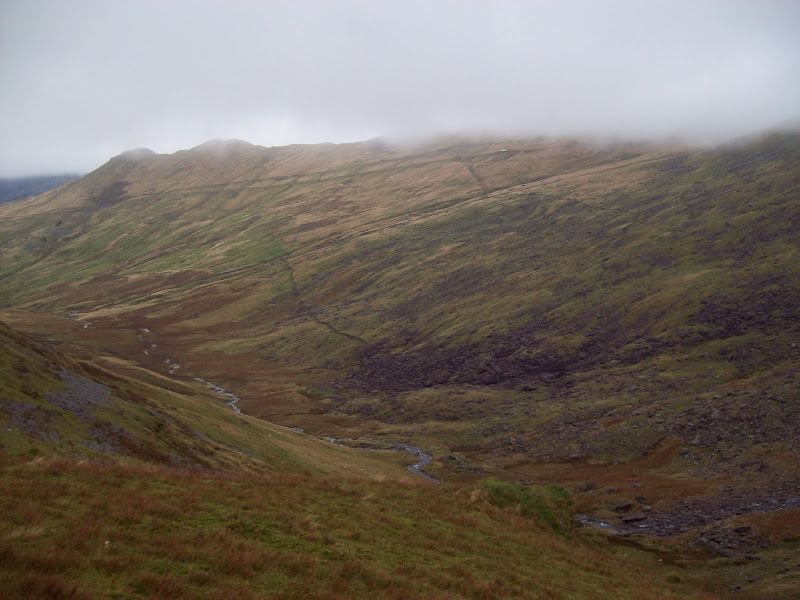 Spur leading up to the top of Cloggy: 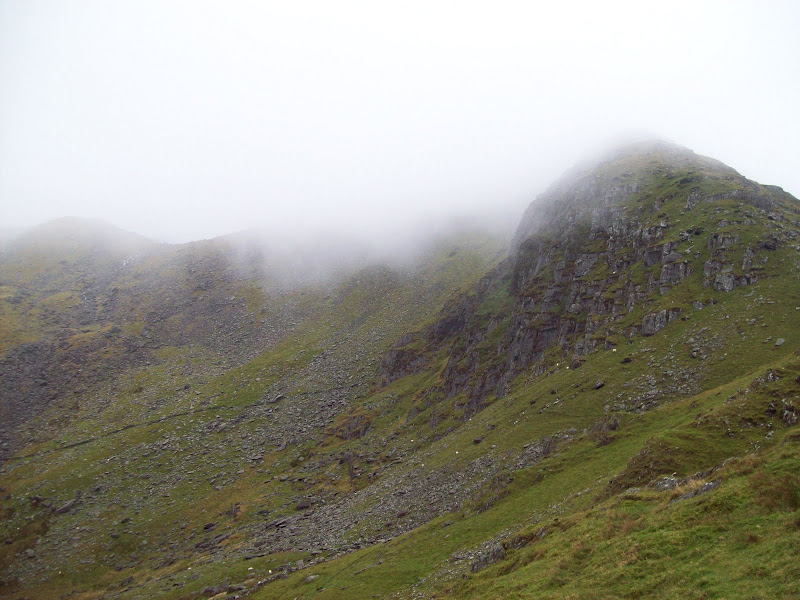 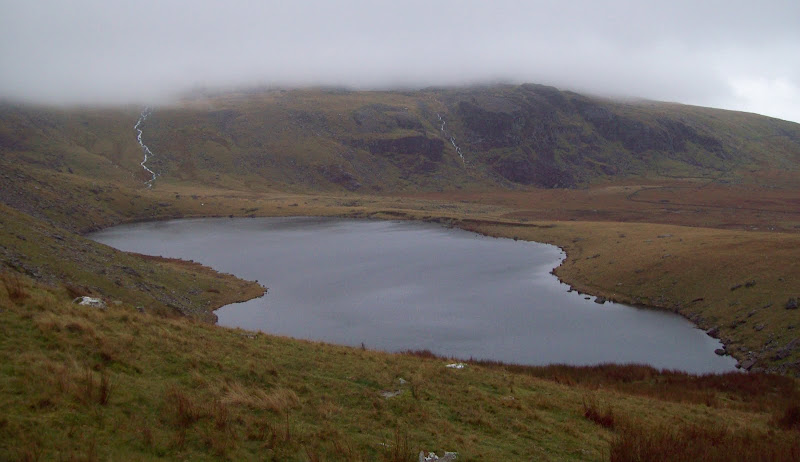 Once back on the Snowdon Ranger path, it was an easy walk back to the car. A good leg stretch, if slightly frustrating in the views department.