Loads of plans for today ! With only 4 Wainwrights required for my half way point, plans for Scafell & Pillar were on the cards and a lovely clear start to the morning looked promising. On reaching Wasdale however, it was fairly clear that the higher peaks were shrouded in cloud and the wind had picked up in the valley so my rescue option was employed and the trio of Middle Fell, Seatallan & Buckbarrow were brought to the table.

We parked at the waterfront by Wast Water by the juction (half way up lake) and headed up the road below Middle Fell. The path took us up the right hand side of Greendale Gill between Middle and Buckbarrow and shortly veered right up a steep grassy bank which was quite slippery from the recent rain. Buckbarrow from road by Wast Water Buckbarrow from ascent up Middle Fell Reason we didn't go up Scafell today (Pillar was similar)

Although visibility was good for navigation and surrounding area, it was fairly poor for any distance viewing and camera struggled to pick out any detail. The wind was fairly fierce when in the face on climb up but views over Yewbarrow and Wast Water made up for that. From the summit we carried on north down to the dell above Greendale Tarn with Seatallan looming in front of us. Looking back at descent from Middle Fell The map doesn't really help here as mine showed no clear path leading to Seatallan summit and only clear path looked like it headed right for a good kilometer or so before turning to climb right hand slope. On crossing the bogland however, I picked up a small track leading up towards a small outcrop and after following this realised I was on a one way trip straight up the very steep face shown in the picture below. With strong winds trying to take me off the face and no real place to stop and rest (even Damson was struggling to stick to the hill side), we pressed on in a striaght line all the way to the summit.

Fortunately this summit has a rock shelter which after taking a few cloudy pictures, we hunkered down in for a quick bite to eat and a much required rest. We didnt stay long however as the wind made it pretty cold on the tops and the best way to warm up is to keep it moving. We headed south toward Buckbarrow next following a very wet trail down the ridge for a couple of km. Keeping my feet was the biggest challenge here as everything was wet and slippery. Navigation is easy as the path is clear and a cairn is clearly visible on the hill top in the distance. From here we dropped left and out to the craggy tops and summit of Buckbarrow. Looking back at Seatallan from Buckbarrow cairn To get down we needed to head back left towards the stream down from Greendale Tarn. Again the path was steep and slippery from the wet grass and fairly direct taking us back to the path on which we ascended Middle Fell. On reaching the car at Wast Water, a touch more sun was trying to break through so we took a few photos and watched a group of mad (well !! they must have been) divers pottering around in the freezing waters. After 3.5 hours walking in the cold, I felt a pint up at Wasdale Head would be in order so we headed the couple of miles up the side of the lake and grabbed a pint of "Lakelands Best View" and a packet of Dry Roasted Nuts. As dogs are welcome, Damson was quite content in sitting on the bench next to me with eyes only for the peanuts. It didn't seem to matter who fussed her or stroked her in there. As long as she got a nut every now and again she was content to stay still and behave. (i'll have to try that one again sometime).

On return home, the clouds covered the sun leaving a lovely broken light over Wast Water so I climbed out and caught it on camera. I also got out on trip back over Birker Fell for a great shot of Green Crags and Harter Fell Pint in the pub below Pillar Sun breaking out over Wast Water 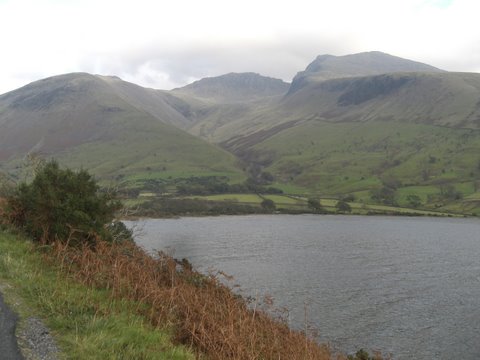 Although these fells are the smaller sisters of most in the Valley, they are not to be underestimated and provided much more of a challenge than I was originally expecting. I quite fancy doing the walk up to Greenburn Tarn again, maybe in winter conditions.