After realizing that I had not been out walking since august and soon the days would be getting rather short and cold we (I) decided that another walk must be arranged immediately. This Corbet with accompanying Donalds fitted the role nicely of not being to long or with to much ascent for a first walk back after a rather long absence and also promised not to be to dull.

The weather forecast was looking promising and the drive through was cloudless blue sky for most of the way, that was until we entered the final glen before the hill when cloud rolled down the slopes and filled the valley in a rather eerie manner. Hoping that this was just a little bit of hill fog that would soon lift we geared up and set off. As the walk description says there is very little of what could be described as "path" on the entire round and the start is no different, we set off on the right hand side of the burn coming down from the cleft in the hillside but soon crossed over to the left as there were faint tracks on that side that lead up the way. This slope is certainly one way of doing the climbing on the walk as it appears that you ascend the entire 800 meters at a forty degree angle with almost no forward motion. The grass was wet and it was only a matter of time before I inevitably ended up on my face. View back down the slope. This picture fails to show just how damn steep it is.

Once at the top of this slope there is an electric fence to climb, this of course would be the perfect time for me to demonstrate my amazing ability to cause personal injury to myself at all times. Determining if the fence is on is not perhaps the best idea but after my dad and touched it and got nothing so just to double check my elbow soon found itself resting against the fence, as you can probably guess that did not end well. Climbing the fence also did not end well as the top wires are live, rather than the bottom which makes foot placement rather more tricky so as to avoid your knee grazing the wires. After this we were well and truly into the cloud and any hope of a view over to Saddle Yoke soon evaporated into the clouds. After the fence there is more climbing and over much rougher ground of longish heather and bog. Once the plateau is reached there are probably good views along the cliffs and down into the glen but i can't vouch for them. The walk along is nice and flat until Falcon Crags is reached where we meat a nice group of people up from Newcastle to walk the round that stuck with us for most of the way around. There is a very short climb up onto the summit of Hart fell which is far from distinguished but does give nice views over to saddle yoke and on to white comb which thanks to the clearing cloud we could now see. 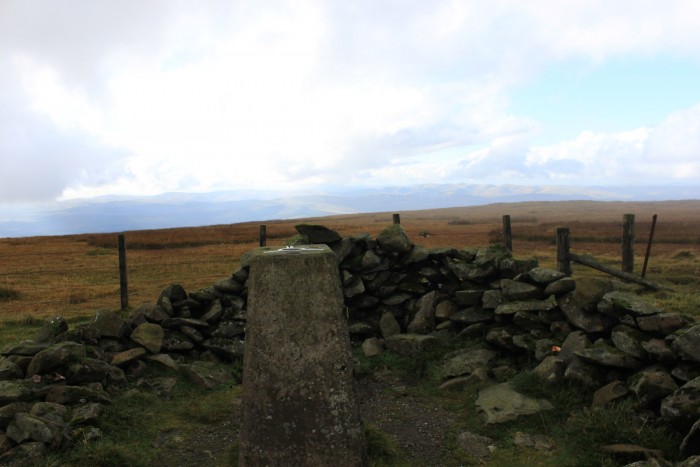 View from Hart fell with White Comb on left

We had lunch just below the summit out of the wind before setting off for Saddle Yoke. The climb up Saddle Yoke is short and the views best along the ridge and up the next glen. My dad at top of Saddle Yoke

The ridge is short and rather wide and then there is just a descent back down to the glen and two gates to go through back to the start. Euan McIntosh wrote:This picture fails to show just how damn steep it is.