Birthday fun in the snow

Birthday fun in the snow


Some people go for a meal on their Birthday, but that wasn’t my preferred activity for the day…instead I had made my mind up to take the day off and to go hillwalking (cant think about a better way to celebrate)
Luckily one of my friends volunteered to join me and after 3 weeks of praying to the weather god and keeping every toe and finger crossed the weather looked not too bad on October the 18th.

After heavy downpours during the morning, the sun finally decided to show its face and revealed beautiful snow capped mountains….I am always so excited when I see the first snow and to do the first walk in the snow on my Birthday just seemed perfect.
We set off after 11 am and headed up the slopes…the first layers came off pretty soon, but when the wind picked up and it started to snow (yeeha) I was glad I had my full waterproof gear with me.

A few hundreds yards from the top the wind turned into a gale and the snow was knee deep in places. Using my poles to stable myself in the wind, I was really struggling to keep my balance. The snow/hail felt like a thousand needles on my face and walking through the deep snow was really exhausting. When I reached the top of the first peak the wind showed its real force and I had to lean forward to battle my way to the first cairn (you just have to love that type of weather!!!)

Walking around the side of the mountain brought us outside the wind and we had some food before heading towards the small ridge which connected the 2 mountains. It is probably a really easy ride walk in summer but seeing it in winter was really dramatic …ridge walk in the snow and gale force winds=great fun.
Walking towards the true summit of Ben Challum was another challenge as the snow was so deep...when we got to a steep bit down the first hill, my friend showed me the only 'real way' to get down a hill in the snow...on your bum!
So sitting down on our bums we slid down the hill (hilarious!!!) Obviously it was so much fun, that I had to do the bit quite a few times before my friend managed to drag me away from the spot.
During the last climb up the hill we were battered with gales of snow and strong winds which started as quick as they finished, but reaching the top and taking some summit pictures made the day so worth while. 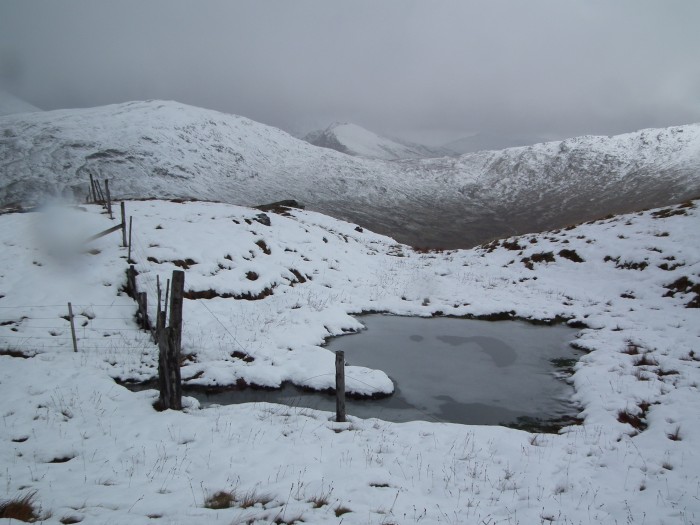 Ok who wants to build a snowman? Struggling through the deep snow you just have to love the drama of winter! The top and a happy birthday to me Great stuff. I have been keeping this hill for snow conditions. Good timing on the report. Cheers.

Its a great one to do in the snow! I can only recommend it!!

Reading that makes me want to just walk out of work and head for the nearest hill. I'm itching to do a hill in the snow (although I might try and go with someone with some experience) and I always remember my dad telling me about sliding down the snow as a means to descend

I've got the gear and I just need to try it out.

Cheers. I did Ben Vorlich yesterday in the snow and it was a great day to.

Yes we ate in the wee wind break area as well. So glad to find it after taking a constant battering on our ascent. And isn't it just fab when the wind decides to give it plenty just as you're crossing the narrowest part of the ridge!

@ Fudgie: Lol great to know that other people spend their work day as effective as myself:-)
Working on a sunny day is just cruel in my opinion! You will love hillwalking in the snow...very
different from summer but so much fun! I cant wait to get out again! Just waiting for the '@x%* rain to stop

Lol yes staggering around like a drunk person and falling around in the snow...
I am glad there werent any other people

Mountainlove wrote:Some people go for a meal on their Birthday, but that wasn’t my preferred activity for the day…instead I had made my mind up to take the day off and to go hillwalking (cant think about a better way to celebrate)

I did the same for my birthday last November, went climbing in Glen Shiel. I had the best birthday gift: the breathtaking panorama of Five Sisters dressed in white

I wonder on which mountain I'll celebrate this year (it depends on my second half, I'll let him surprise me).

Great report - I have been waiting for the first snow, probably like most of hillwalkers. Are we going to have another very white winter?...

@ BlackPanther: Great to know that others like to celebrate the same way

Hope you will be lucky with the weather this year as well!!Lol at the moment I am just hoping for the rain to stop!!!

Wow - your pictures really capture the drama of winter walking and what a (semi) serious business it is. I guess we can put the shorts and midge cream away for another year then ?

Unfortunately as I sit here at my desk reading this report and wondering where I put my ice axe in anticipation of a weekend walking in fresh snow, a quick check of the BBC weather brings me back to earth - rain on Saturday and Sunday

Glad you had a nice birthday walk and got out when you did.

One question ML , did you bring any cake ?

@JOHNGG...thats what I have just done as well when I realized that I still had my suncream and midgy stray in my
bag

Regarding the ice axe...I keep mine in the boot of my car...brings a smile on my face everytime I see
it

@ Gavin....a perfect selfmade cinnamon,nut and apple cake was up on the hill...it had to be!!!

Happy burpday to you!! The excitement the first snow brings is great

Love the drama pic! We did Stob Diamh today and reaching the snow line sure made up for the gloom and pi**ing rain/sleet we endured the whole walk!

nice report Mountainlove, i hope to get out in the snow soon and this is one of the hills im looking at doing, cheers