The weather forecast on MWIS was rain, low cloud and 30 -60mph winds.
So as I was only up here for 2 days I thought I'd have a go at Ben More and Stob Binnein today and see how the weather was as I went on.
I parked up in the layby and the weather forecast was right, it was raining and the cloud was low, but only a light breeze, so waterproofs on and away I went.
Back up the A85 to the little sign and over the stile, follow the track as it winds its way up hill and through the gate. From here I wish I had seen PollyH advice to go around Ben More and up between the two. But no, I followed the WH route advice, picked a line and headed up the slope, its very steep, was very wet/boggy/slippery and goes on like that for what seems like forever.Occasionally bits of a track are visible but the higher you go the more obvious the track becomes. Yes it is that steep!

At about 750m I entered the clouds and that was the last i saw of more than 30m in front of me for the rest of the day until i came back down. 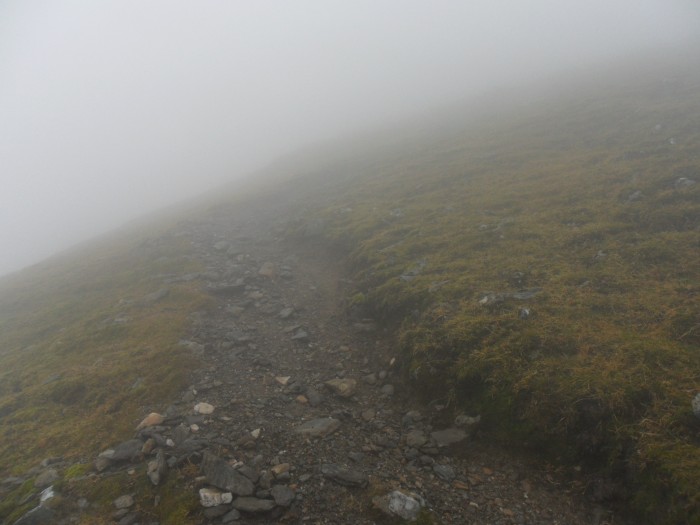 The wind at this point was just a breeze, with the occasional gust but causing no problems. My biggest problem was the waterproofing on my coat not been waterproof to Scottish standards

i was getting wet

After a quick lunch break under an angled rock at around 930m I struggled on until i reached the top, this is where the last bit of the weather forecast was right. The winds where very strong and gusty -I was struggling to stay upright, so after a very quick summit photo I decided to abandon Stob Binnein as the wind was coming from that direction and retreat back the way I came. 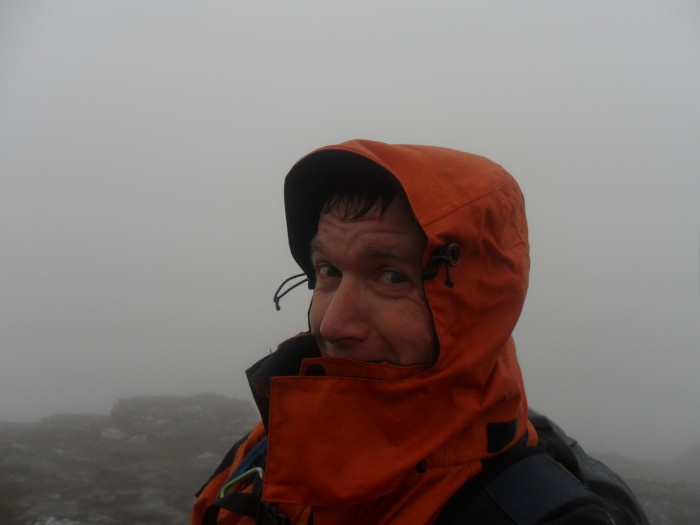 Coming up the slope was hard work but going back was just as difficult, wet, slippery and boggy. Eventually i came out of the clouds and after a very long 5.5 hours & falling over a few times I was back at the car, very wet.
After drying out the sun came out for a bit and i could see where I'd been!! Ben More from the car

Aye stephen ,a tough climb on a good day ,you did well on getting to Ben More in those conditions

Cheers Pigeon.
The problem with living so far away and getting up to Scotland only occasionally is the desire to reach the top and have something to show for you're effort and balancing that with common sense on when to turn back.

Aye, I did the slog up the N slope and couldn't work out why the glen-col route is not the recognised one after descending that way. Good effort anyway on a day like that

I was out yesterday on Meall Ghaordaidh (report to follow) and the winds were horrendous!!!

As for your jacket, definitely go for Goretex / event type of thing. I bought a Haglofs jacket two months ago and was assured that their own (eco-friendly) waterproof/breathability system was ideal- it wasn't!!! Took it back and got the same jacket but the Goretex version ( had to put another £170) and its been fab!

Hope you get back up to Scotland soon

Good call, and I am sure you enjoyed Ben More now looking back at it (Two mountains would not have been fun in those conditions). Stob Binnein will always be there for another day when you can enjoy it in better weather. You can also walk it from the South starting up past the end of Loch Voil

Similar conditions too when I did it but continous 50-70mph winds from 800 meters upwards. I don't know what the big fuss about it being steep is all about, I can't mind it being that bad and tbh I actually enjoyed the walk ?

The ridge going up the other side of the corrie looks interesting and when I go back that will definatley be my route of choice !

You sure had a tough day to contend with. You did well to bag Ben More though, well done.

Well done Stephen, on managing to get this one done.
I tackled it the very same day with my eldest son (4) and it was not a nice day to be taking on this beast.
We opted to take the landrover track all the way up the glen, but not too long after taking to the hillside proper, my boy ended our attack in one short, but very clear sentence.

"Dad, can we just go home? I don't want to climb mountains today. It's too wet and too I don't like the wind."

I couldn't argue with that, and didn't see the point in trying to worse him up a hill when he wasn't enjoying it.
We tried, and "bailed". No shame in that.

Martin
I think I might met you at Crianlarich Youth Hostel the night before?

That would have been us.
We we're indeed staying there on Sunday night.