Didn't find it boring and next day saw ospreys

Didn't find it boring and next day saw ospreys


Inspired by Polly, decided it's time to do a report on this hill. I climbed it last summer with Pete who doesn't much enjoy squelching through ankle deep mud, battling against horizontal rain or being chilled to the marrow on summits with no view (strange man) but will occasionally do all of the above so his wife can indulge her passion for climbing hills on holday.

We were staying in a cosy cottage for two with no TV or signal for mobile phone or internet - but it does welcome dogs and is surrounded by miles of great walking country.

More of that later.

I thought Meall Ghaordie would fit the bill as it wouldn't take all day leaving plenty of time for a leisurely explore of Killin and a meal afterwards. I wasn't much inspired by Cameron McNeish who dumps it in "the less interesting category" and refers to "the monotony of its interminable slopes".

Not enthused by that we didn't bother with an early start, had a pleasant drive to Glen Lochay, parked at the designated spot and followed the sign pointing the way to Meall Ghaordie. It being farmland we kept both dogs on lead. Tess is totally trustworthy around livestock but farmers don't know that and get twitchy seeing dogs off lead. Fair enough. I'd rather not give them any reason to complain about folk traipsing over their fields. On the way in this field seemed totally empty but on the way back it was full of cattle clustered around the area the path went through. I'm glad I didn't know then what I know now about cattle sometimes being spooked by dogs and going into stampede mode.

I thought with this being access to a Munro they'd be well used to walkers and the best thing to do was walk confidently (like farmers) and stick to the path with dogs on short lead. Which is what we did, the dogs very subdued (like they sensed the need to be low key) causing only a slight ripple of curious bovine interest - and more importantly we lived to tell the tale.

The dogs have been known to scramble over stiles but they prefer a gate that opens. There must have been something going on with the sheep as they were densely packed on the hillside to the east of our path. Ewes being separated from lambs might account for the racket they were making - but whatever it was they weren't taking it quietly. Jack still on lead because of proximity of sheep, but all he wants to do is climb this hill! Just before the ruins of the sheilings we turned off on a path to the left to start climbing the heathery grassy slopes. It was easy walking with just a few muddy areas to be negotiated. I have to be honest Mr McNeish and say I didn't find it monotonous at all. 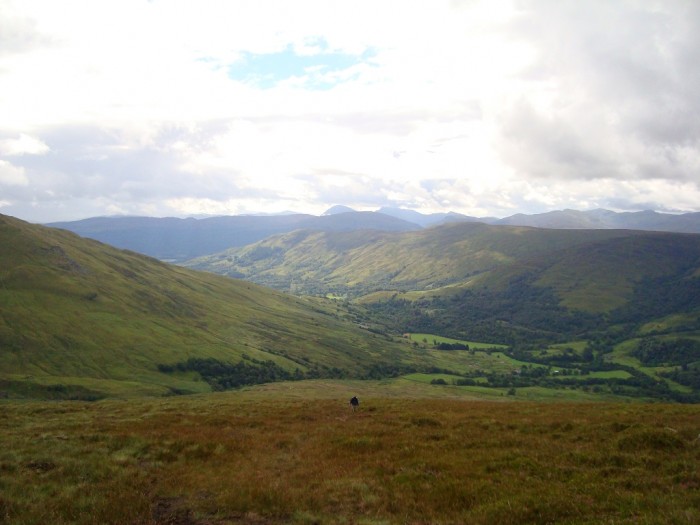 Jack never happier than on the hill Does intensity of focus suggest there might be food about? As we neared the top it was steeper with outcrops of rock giving the hill interest and character.

It's raining down there and we're still in the dry As we reached the rockier section I lost the path and picked one up which I followed briefly. But it was traversing east round the rocks and not taking us where we wanted to be. So I headed straight up getting the hands a bit dirty - but in my book it doesn't feel like a proper climb without a slight scramble.

Above the rocky bit, Jack getting up a fraction early As we reached the summit we were enveloped in cloud so no views, which I was more sorry about for Pete than for me as I so much want him to understand why I do this! We huddled inside the wind break but there was something Tess wasn't happy about. She gets spooked about things sometimes.

Tess trying not to be in summit pic 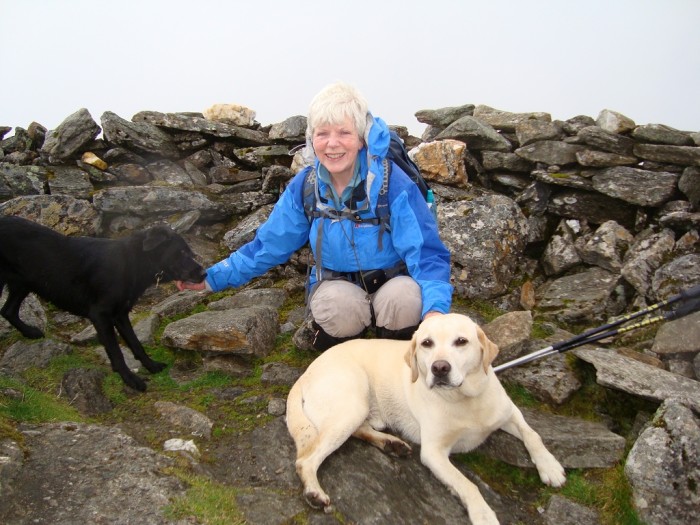 Once off the top we were in the sun again 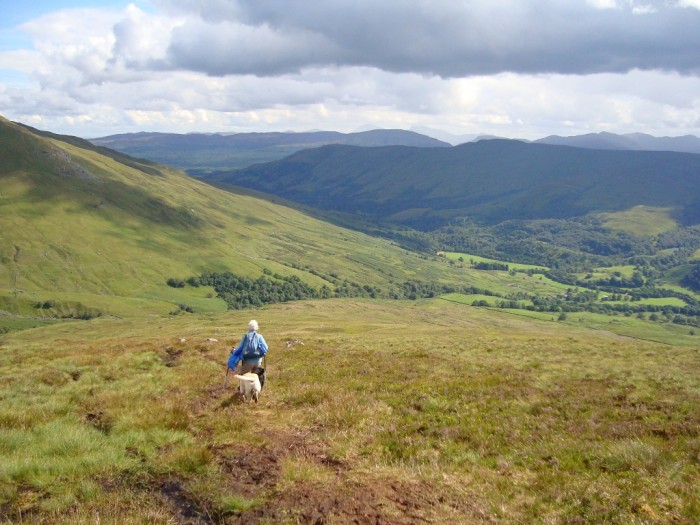 Back at the cottage, synchronised sleeping 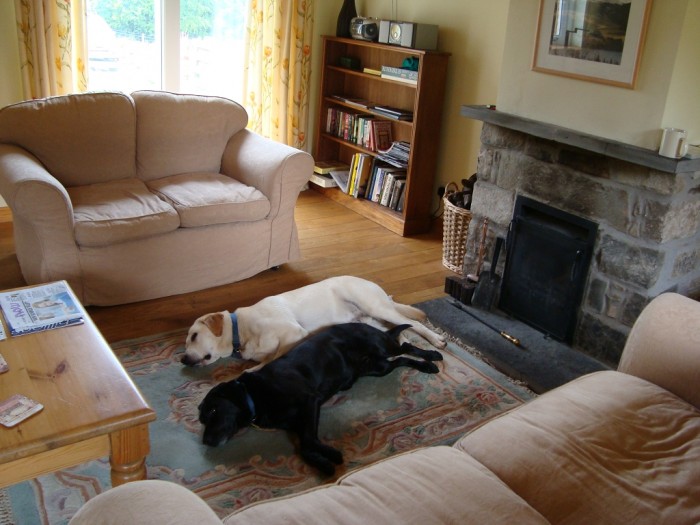 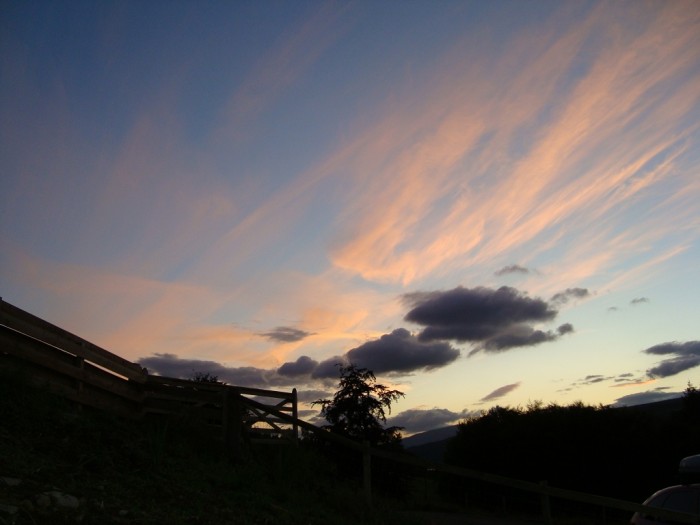 The cottage owner told us where ospreys were nesting close by. So the next morning we walked up to have a look. 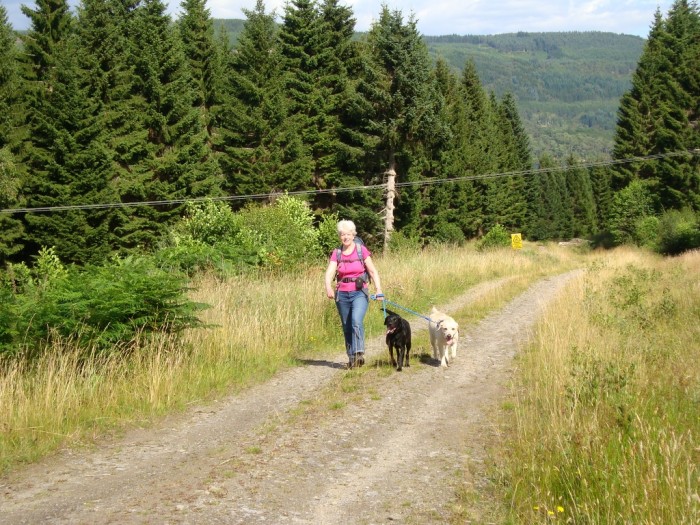 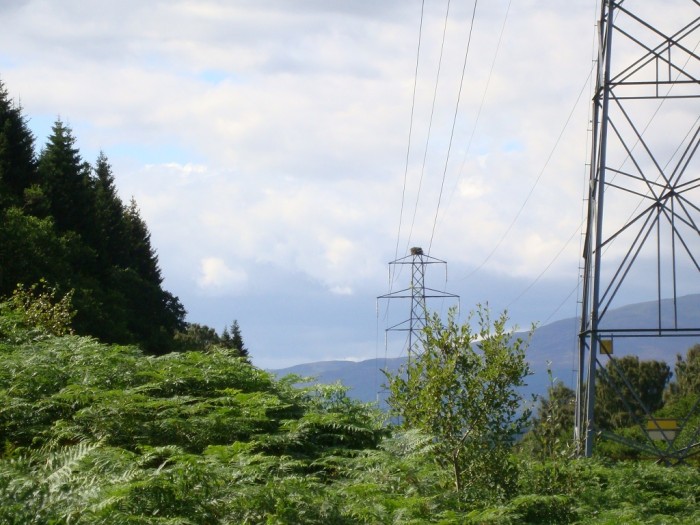 We saw what we took to be a parent bird and a juvenile getting in some flying practice before the long flight to Africa. Another great report, you really love your days on the hills

these look great dogs you have, must be fantastic company when you're out there

Great report again DP, some beautiful pics too. Don't you just love it when it rains away in the distance as you stand high on a hill watching it pass

Lovely to see the ospreys, what an incredible sight they are

RTC wrote:Lovely dogs. Agree with you about Meall Ghaordie. I've done it twice and enjoyed it both times, especially near the top. I think that most hillwalkers will find some enjoyment in most hills, especially on looking back on a walk.

We're spoilt in Scotland for great hills so we end up putting them in leagues of spectacularness. But one of the things I love is the variety and difference in character from hill to hill. The only place I didn't feel so positive was on Cairnwell and Carn Aosda where it's so scarred by what we've done to it.

Great to see the dogs out in the hills. Maybe need another main topic, Munro Mutts

I done this with the top half in the snow. The colder temperatures certainly helped the bog factor making the ground hard. Nice walk

morag1 wrote:these look great dogs you have, must be fantastic company when you're out there

They're great dogs Morag - both unwanted dogs that I got from a Rescue. Ah well, someone else's loss was definitely my gain.

On the few occasions I've gone solo I've never felt alone with the dogs for company.

ChrisW wrote: Don't you just love it when it rains away in the distance as you stand high on a hill watching it pass

monty wrote:Great to see the dogs out in the hills. Maybe need another main topic, Munro Mutts

I done this with the top half in the snow. The colder temperatures certainly helped the bog factor making the ground hard. Nice walk

There are probably enough WH mutts to justify it!

Yes that's the benefit of lower temps firming up the bogs. Didn't find this one too boggy though - just a few patches churned by many boots into mini mud baths to avoid!

What a lovely report Kathleen.

Great to see some of the views I missed out on, again!!!!

That's a bit of a treat catching sight of the ospreys, although I would be lying if I said I would have been able to identify them!!!

Alas once more the photos of the dogs steal the show