Not a tulip in sight but loving the Fannichs!

Not a tulip in sight but loving the Fannichs!


Apologies if I shouldn't have clicked on this as a Walkhighland route as I realise our route was rather different - although some of the pics are still relevant to WH route and it was a really good route to do.

Having climbed her first Munro a couple of weeks earlier in May, and despite getting frozen half to death

my Dutch friend Bregtje was keen to do some more!

More than happy to aid and abet I suggested two of the Fannichs (never know if there's meant to be an extra 'a' in there - answers please on post card). MWIS was looking good so we parked at Lochdrum in high spirits

and followed the small access road that crosses the west end of Loch Droma. We continued along the track beside large water pipes to the dam across the Allt a Mhadaidh.

Bregtje and dogs on the walk in to climb Sgurr Mor We kept to the stalkers path along the north side of the Allt a Mhadaidh until a river crossing we didn't fancy inspired a wee detour further to the north. Actually the crossing wasn't too difficult but I wasn't sure how waterproof Bregtje's boots were and didn't want her getting soaked feet quite yet!

We picked our way along sketchy paths heading in the general direction of the bealach between Meall a Chrasgaidh and Carn na Criche. That brought us nicely and with dry boots to just north of Loch a' Mhadaidh. Time for a mutt shot. Tess declined but Jack is a bit of a poser Beinn Liath Mhor Fannaich - our second Munro of the day We watched a pair of walkers ahead of us taking a line up a shallow gully just below Meall a' Chrasgaidh but rightly or wrongly we took a more direct line climbing steeply up the slope west of Loch a' Mhadaidh. We had a short break for some calorie intake and to enjoy the views north to the Beinn Dearg hills and back to where the car was parked by the Ullapool road.

Note dogs' leads wrapped round foot. Hopefully Jack won't spot a hare he has a sudden urge to chase! View west to Sgurr Breac and A' Chailleach Summit of Carn na Criche with Sgurr Mor beyond About to climb the summit cone of Sgurr Mor 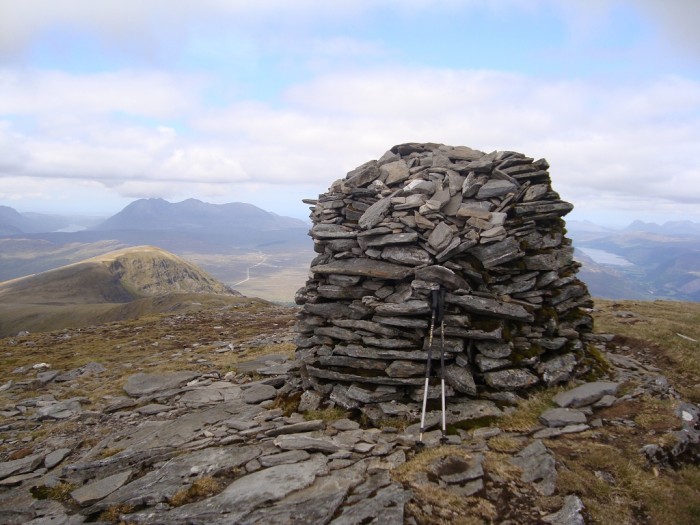 Jack has learned that we spend a bit of time at the top of hills while I admire views and take pics so he uses this opportunity to get some kip! We took the path down the east side of Sgurr Mor, bearing north east following the ridge towards Beinn Liath Mhor Fannaich. I expected this descent to be steeper than it was. An Teallach and Loch a' Mhadaidh from Beinn Liath Mhor Fannaich ) so I gave her one of my poles which helped. We worked our way down the north east side dodging the stony sections and rejoined the path by the Allt a Mhadaidh and (still with dry feet) back to the car at Lochdrum as Bregtje regaled me with stories of her grandfather who escaped from concentration camp during WW2, walked hundreds of miles sleeping in ditches and barns and made it safely home.

I think I see where her determined spirit comes from.

All in all another fantastic day in the Fannichs!

Re: Those posing mutts again

Re: Those posing mutts again

I've retitled this report in honour of Bregtje who is more used to flat Dutch cycle paths than steep Scottish stalkers paths - but is loving every minute of it!

Great report thanks, and nice to see some spots that we passed through in the clouds earlier this year. Need to get back and complete more of the Fannaichs....

I'll second that Bod. Love the two dogs, they sure like to pose

Bod wrote:Great report thanks, and nice to see some spots that we passed through in the clouds earlier this year. Need to get back and complete more of the Fannaichs....

Thanks Bod. They're great hills if you get the weather!

Johnny Corbett wrote:I'll second that Bod. Love the two dogs, they sure like to pose

They've got more posing lined up. We're just off to climb Am Faochagaich with kath098 complete with wellies to save getting numb feet.

Just realised I didn't include a summit shot from Beinn Liath Mhor Fannaich so in the interests of giving a well rounded report here's one from when I climbed it with gizmogirl in 2005.